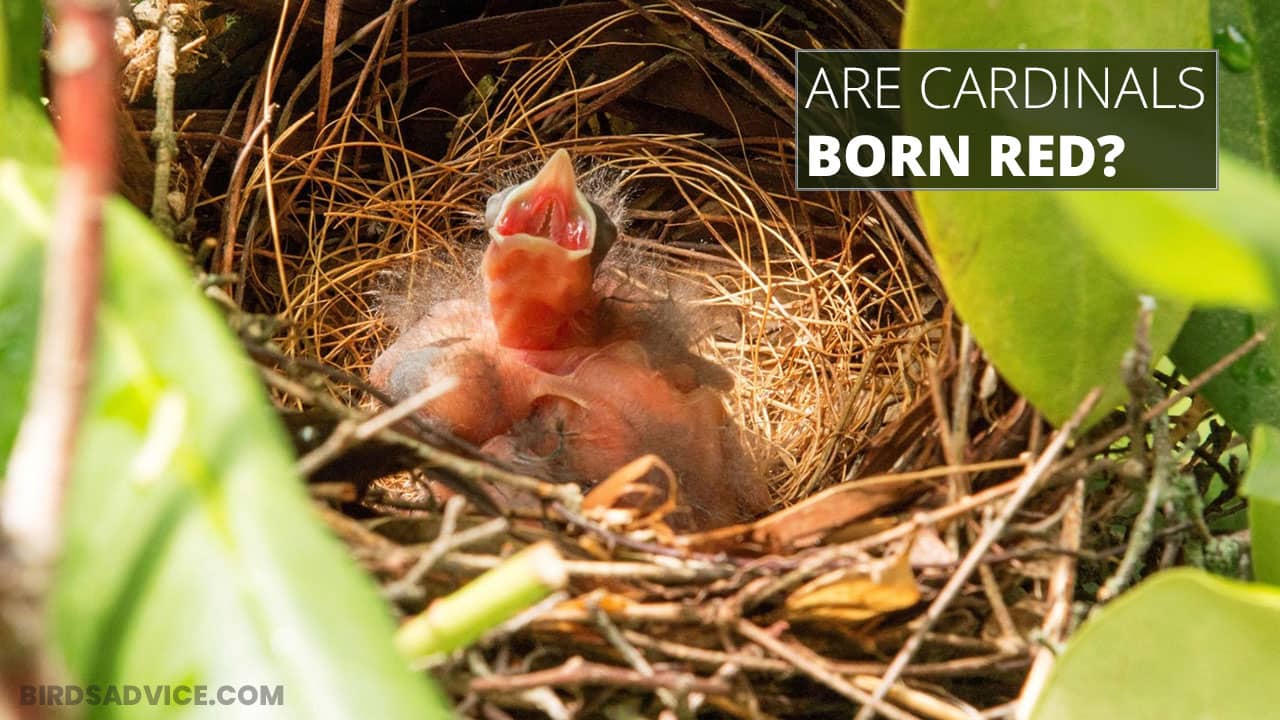 Have you ever wondered why male northern cardinals are red? The carotenoid pigments in their diet are responsible for the red coloring. Although male cardinals are bright red overall, the females feature brownish or tan plumage.

Contents show
1 What Are the Color Phases of Northern Cardinals?
1.1 01. Babies
1.2 02. Molting
1.3 03. Female Adults
1.4 04. Male Adults
2 At What Age Do Cardinals Turn Red?
3 What Do Baby Cardinals Look Like While Leaving the Nest?
4 Do Cardinals Change Color in Winter?
5 Can Cardinals Be a Different Color Than Red?
6 Final Words

Now, the question is, are cardinals born red? The short answer is NO. Northern cardinals aren’t born red. There is no red in either the male or female hatchlings. Indeed, they’re born with pink skin and grey scaling. The internal veins can be seen through the grey scaling. When they become adults, the males grow red feathers, but the females grow tan or brownish feathers.

In this article, we’re going to talk about the color phases of northern cardinals from childhood to adulthood. We will also answer some of the frequently asked questions. After reading this, we recommend taking a quick look at another article on what cardinals eat.

What Are the Color Phases of Northern Cardinals?

When northern cardinals are hatchlings, they feature a pink layer of skin with grey scaling. In this stage, there is no prominent red in either males or females. When they become nestlings (meaning 3 to 13 days old), their molting phase starts.

Young cardinals grow a tan hue visible until the next stage. Their black beaks turn into faded coral red. Once they become fledglings, they start to grow feathers, especially in the fall. The feathers on the tails and wings transform into fainted red.

On the head and torso, male northern cardinals develop prominent red feathers, but the females grow light brown and greyish plumage. During this period, black masks are visible around the beaks of both genders.

The female adults are mostly brown or tan with light red spots. They don’t form bright red like the males. Both genders are similar in their body structure, the shape of their head, the red-tinted beaks, and the black masks around the beaks.

The male adults are shiny and bright red. But, some of them feature brown spots on their tails and wings. Like female cardinals, they have a black mask around their beaks. The vibrant red differentiates them from other species of cardinals.

At What Age Do Cardinals Turn Red?

When male cardinals are adults, meaning they’re about 12 months old, they become thoroughly red. At this point, the molting process finishes off. However, the black beaks of both genders turn into faded coral red at the age of 14 days.

What Do Baby Cardinals Look Like While Leaving the Nest?

While leaving the nest, a baby cardinal looks almost like an old man with a bald head. At this point, both male and female baby cardinals feature a short tail, a wide, stubby beak, and some streaks of red throughout the body.

For your information, baby cardinals leave the nest more than once. At first, they leave the nest when they’re fledglings. After a while, they return to the nest for several weeks. When they finally leave the nest, they’re called juveniles.

Do Cardinals Change Color in Winter?

A bright red male cardinal against a snowy white background looks stunning. Does he look brighter due to the contrast? In fact, cardinals molt their old feathers and grow new ones in early fall. That’s why they look extra bright red in winter.

While the feathers on the neck and back are tipped with grey, these dusky feather tips slowly reveal more brilliant red during winter. Besides, the carotenoid pigments found in red and purple fruits are the main cause of cardinals’ redness.

Can Cardinals Be a Different Color Than Red?

Cardinals may come in four different colors, such as red, white, yellow, and golden/brown/tan. Many birders believe they have encountered a blue cardinal. But blue cardinals don’t exist. They might have seen Steller’s jays.

Male cardinals are usually red, but the females are brown or tan. Cardinals come in white due to the lack of melanin in their plumage. In addition, some of them can be yellow due to the yellow pigment, also called genetic mutation.

In summary, cardinals aren’t born red. The male cardinals become thoroughly red when they’re about 12 months old. In winter, their redness could be more and more vivid. Instead of red, cardinals may be white, yellow, and golden.

By the way, we hope you have learned the necessary information about the color phases of northern cardinals. If you have ever witnessed white or yellow cardinals, share the experience with us below in the comment section.