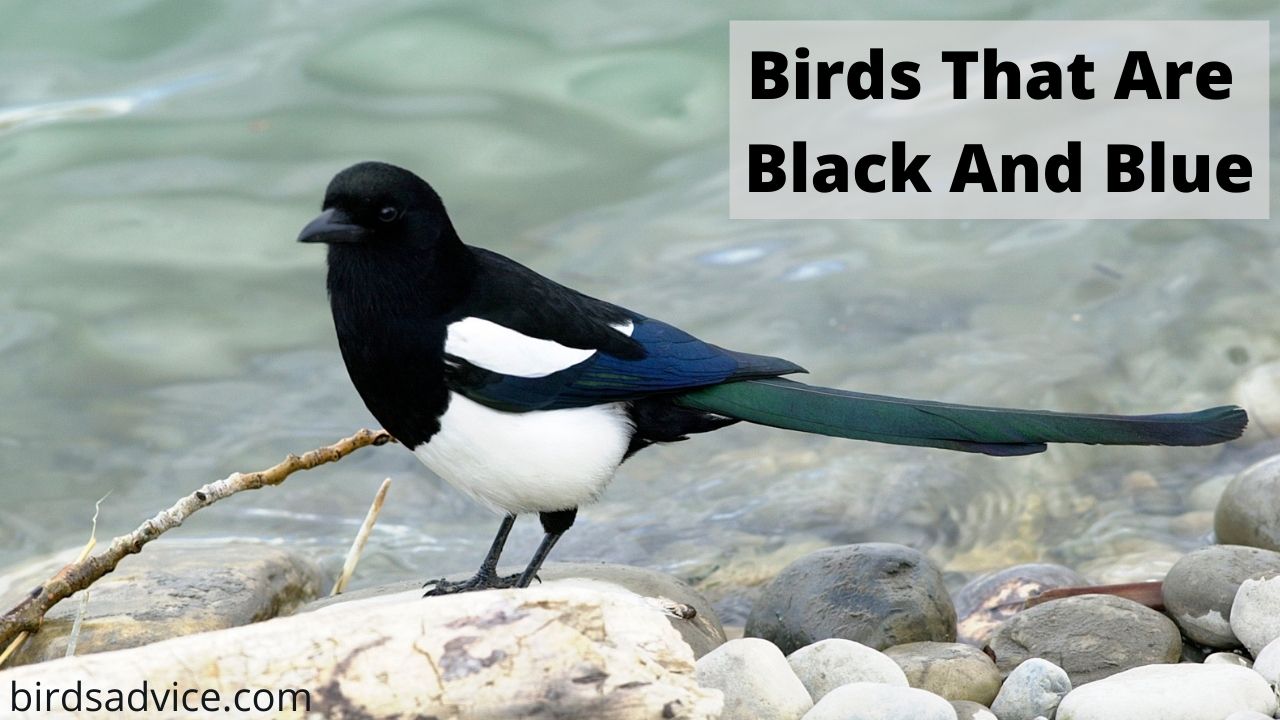 Have you spotted a new bird in your garden recently but can’t quite figure out what it is?

Well, it could be that you’re looking at the wrong color!

With black and blue being relatively close to each other on the color spectrum and birds moving at such rapid speeds, that flash of black you thought was a Blackbird could be an entirely different species.

Below, you’ll find a list of 14 black and blue birds.

They’re all here, from the instantly recognizable Black-billed Magpie to the harder-to-identify Purple Martin!

You’ll also learn some tips on where to spot them and how to encourage them into your garden.

Found all over the globe, including Europe, Mexico, and most of North America, the Black-Billed Magpie is one of the most recognizable birds in the world.

This large bird measures up to 24 inches long and has iridescent blue-black feathers and white underparts. It also has white markings on its wings and its namesake black bill.

The Black-Billed Magpie prefers to live in open areas such as woodlands, parks, and riparian thickets.

It isn’t a shy bird either and will happily visit the garden to feed on fruit and seeds and pick insects from the ground.

The Brown-Headed Cowbird is a typical garden visitor across North America, and it has been recorded living in yards, meadows, forest edges, fields, and pastures.

It has iridescent blue-black wings, upperparts, underparts, and tail, while its head is brown. It is also a medium-sized bird, measuring around 9 inches on average.

Being so common, it isn’t tough to attract the Brown-Headed Cowbird into your garden.

Its diet consists of seeds, grass, berries, nuts, and suet. So, as long as you’ve stocked your feeders with these, you’ve got a perfect chance of seeing one.

With its punk-rock black crescent, the Steller’s Jay is one of the most unique-looking birds on our list.

Most of this bird’s body is covered in blue feathers, including the wings, tails, and underparts.

From the shoulders to the neck, it has black feathers, a black breast, and face, and, of course, that incredible black crest.

Native to Western North America, you’re most likely to spot a Steller’s Jay in deciduous or coniferous woodland.

They have been known to visit gardens as well, though, especially those well stocked with seeds, berries, and nuts. They’ll also eat any insects they come across, including spiders.

Despite its name, the European Starling is quite common all over the world.

It was once native to Europe, but because of human intervention, it can now be found worldwide.

And because of its tenacity and adaptability, it has thrived in many different environments.

The European Starling is one of the most beautiful birds you’ll ever spot. It has black-blue iridescent feathers all over its body, with tinges of green on its wings.

It also has white speckles across its back, chest, wings, and head, making it super recognizable.

Their adaptability also extends to their habitat, and European Starlings are happy living in fields, parks, gardens, towns, and cities.

They can also often be found roosting under piers. They have a diet that mainly consists of insects, but they’ll eat berries and fruit without any issues as well.

This large bird can be found throughout most of North America. Measuring around 12 inches in length, the Common Grackle can be identified by its black tail, wings, upper parts, and underparts.

Its head and breast, on the other hand, and a bright blue color which contrasts magnificently with its yellow eye.

Quite a common sight, the Common Grackle sets up home mostly in rural areas, but it has been noted roosting in urban areas and backyards.

Its diet is mainly insectivorous; although it has been known to feed on seeds, some have even been seen feeding on small mammals.

Understandably, the Western Jackdaw is often mistaken for the Crow. However, it has some telltale differences.

First, it’s a little smaller, measuring around 13 inches. Its plumage is also lighter black than that of a crow.

It also has a blue-purple crown, wings, and tail.

It sets up its home in many different habitats, too, including coastal cliffs, pastures, woodlands, and urban areas.

Their diet combines insectivorous and carnivorous, and they’ll eat anything from small insects to rodents and carrion.

They’ve also been known to scavenge in the trash to find something tasty to peck at!

One of the few birds on our list that is more blue than black, the Indigo Bunting is a small bird that measures an average of 5 inches from head to tail.

Its entire body is covered with bright blue feathers, and just the wings and tail and a darker blue-black color.

They can be enticed into the garden with a good variety of seeds, but you’re unlikely to spot one in winter as they migrate to South America, Florida, and the Caribbean.

The Blue Grosbeak is another blue and black bird that is relatively easy to identify.

It has bright blue feathers across its back and breast, a blue face with a black mask, and brown wings with black streaks. It also measures around 6.5 inches on average.

This songbird can be found throughout the Southern and Central United States and prefers to roost in forests and shrublands.

They have a varied diet of seeds, grain, fruit, and insects.

Although native to Eastern North America, the Black-Throated Blue Warbler does not spend the entire year here.

Come winter, it migrates South to the warmer temperatures of Central America and the Caribbean.

A small bird measuring an average of 4.5 inches, the Black-Throated Blue Warbler can be identified by its blue upperparts, white underparts, and black face and throat.

It resides in deciduous forests and feeds almost exclusively on insects but will peck at fruit and seeds when needed.

Most people are familiar with the famous African Swallow, but have you ever seen a Tree Swallow before?

Although very similar in shape and size, these little birds are entirely different in color.

The Tree Swallow has a bright blue back and cap, white underparts, and black wings and tail.

They are common across most of North America, especially during spring and summer, and they are experts at hunting on the wing, snatching insects out of the sky with expert precision.

They’ll also eat fruits and berries and drink from droplets of water on trees and plants to keep themselves hydrated when temperatures begin to soar.

No, we’re not making this up. The Splendid Fairywren is a real bird! These remarkable-looking birds are most commonly found in Australia, living in dry, shrubby habitats.

They also have one black line that runs horizontally around the breast onto the wings.

The Splendid Fairywren is a social bird that lives in colonies of up to 8 strong and, like most other small birds, they are fiercely territorial.

The Bee Hummingbird isn’t only beautiful – it’s also the smallest bird in the world, measuring just 1.5 inches on average.

It has turquoise-blue upperparts, black wings, a black tail, and gray-white underparts.

You won’t find one of these in North America, as they live exclusively in Cuba, where they feed on flower nectar and insects.

Interestingly, the Bee Hummingbird has to consume half of its body weight in food per day to survive!

Another bird with a name that you might think we’ve invented, the Shining Honeycreeper, can be found in the evergreen forests of South and Central America.

It has a bright blue back, head, and underparts. It also has a black tail, throat, and wings.

The Shining Honeycreeper is a very active bird with a loud voice, and males and females will often sing in a duet at sunrise and sunset.

They are also omnivorous birds, eating a diet of insects, berries, and nectar.

Native to North America, the Purple Martin is one of the more difficult birds to identify on our list.

It is covered with blue-black, iridescent feathers, and unless it’s a mainly sunny day, you may not think it has any blue sheen. It also measures around 7 inches on average and has a long, slender body.

This body shape, along with its sharp beak, is perfect for hunting insects, which are the Purple Martin’s preferred food.

Come late fall, this glorious little bird escapes the cold by heading to Mexico, returning to North America to breed in the spring.

Next time you spot a flash of blue-black in your garden that you can’t quite identify, open up this list to help you discover what you’ve just seen.

It might be pretty standard, but you never know, it could be a tiny bird you’ve never encountered!