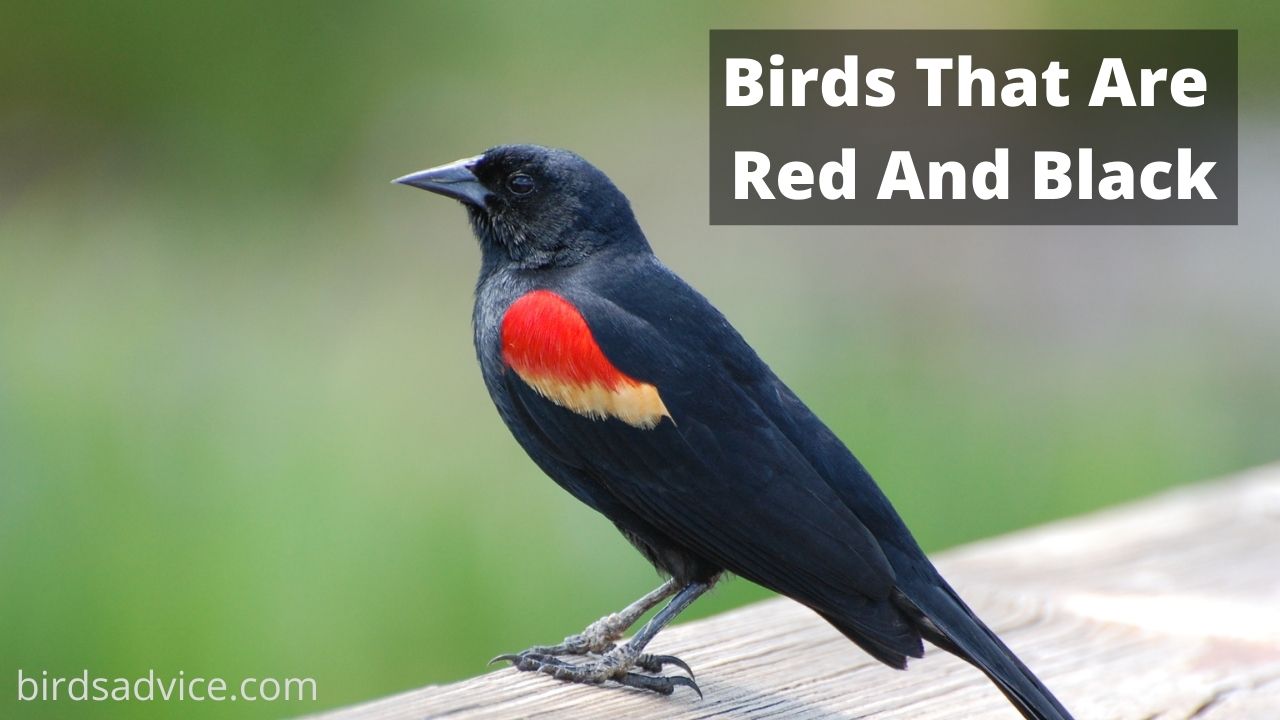 So many that it can be quite difficult to categorize them! That’s why we’ve done the hard work for you.

Below, you’ll find a list of 11 red and black birds.

From the famous Northern Cardinal to the lesser-known Red-Winged Blackbird and everything in between, you’re almost certain to find that red and black feathered friend you’ve seen flitting about in your backyard recently!

One of the most common birds in North America, Canada, and Mexico, the Northern Cardinal is almost unmistakable.

It has bright red feathers covering its upper and lower parts, breast, wings, and tail. It also has black markings on the ends of its wings and a black face.

Its crowning glory is the bright red crest that sits atop its head.

This brightly colored bird is 9 inches long and most commonly found in deciduous forests. It’s not uncommon to spot one in other places, including open woodlands, parks, and gardens.

As long as there’s a water source nearby, the Northern Cardinal is happy to make a home there!

They’re also very sociable birds living in flocks and traveling together during migration.

Their diet consists of insects during the summer, and, as winter and migration approaches, they’ll happily visit bird feeders stocked with seeds, nuts, and suet.

Often mistaken for the Northern Cardinal, the Masked Crimson Tanager has similar colors and markings.

Its body is covered in bright red feathers, including the back, breast, and head.

The thing that separates them, however, is that the Masked Crimson Tanager has a black mask, wings, cloak, belly, and tail. It’s also a little smaller, measuring 7 inches in length.

Usually found at higher elevations, they aren’t a very common sight. They will head down to the lower ground when food becomes scarce, though, and they have a huge appetite for insects.

They’ll often visit fruit trees, too, to feed on the insects living on them and eat young berries and fruits.

The Tricolored Blackbird is quite easy to identify. It is almost entirely iridescent green-black and has a flash of red and white on each shoulder.

It is native to the coastal regions of North America’s Pacific Coast, and its range covers Canada to Mexico and almost everywhere coastal in between.

This beautiful bird feeds almost exclusively on spiders and insects and forages around for them on the ground.

They will also eat seeds and berries, particularly during the winter when there aren’t as many insects to choose from.

The Tricolored Blackbird is also a very sociable bird, and large flocks roost communally at night.

They mostly build their nests in tree cavities, but they have also been known to construct their own in the branches of trees.

Native to North America, the Scarlet Tanager is a medium-sized bird with bright red feathers covering almost the entirety of its body.

The only patches of black are its wings and tail. It also has a white beak.

You’re most likely to spot a Scarlet Tanager in the Easter United States, but they have been known to travel as far as New Mexico and Colorado.

They set up their homes in deciduous forests or large wooded areas with oak trees and always choose a place near a water source.

This bright red bird has a distinctive song too, and you may find that you hear one before you spot one. Its call sounds like a series of trills and whistles that aren’t unlike a chorus of little bells sounding.

The Crimson-Collared Tanager is an incredible-looking bird most easily identified by its bright red cap, neck, and breast.

The rest of its body, including its face, is covered with jet black feathers, giving it an almost menacing appearance. It’s also large, measuring up to 10 inches in length.

This bird is native to Central America and Mexico, and, unlike many other birds, the female of the species has brighter feathers.

They live primarily in lowland forests, although they have also been recorded in open spaces, including mangroves.

Exclusively insectivorous, the Crimson-Collared Tanager feeds on crickets, beetles, spiders, grasshoppers, and any other insect it can find.

It’s also very good at hunting on the wing and will soar across open water, catching any flying insects.

The largest of all North American Woodpecker species, the Pileated Woodpecker is covered with black-gray feathers, has a white stripe across its face, and a bright red cap.

Males and females are identical in appearance. The only difference is that the males are slightly larger.

They also have a long bill that helps them bore into the bark of trees and pull out insects such as beetles, ants, and wasps.

In this drilling process, they often create large holes in the trees in which they nest. Other birds have also been known to nest in old Woodpecker holes too!

As you may have guessed from its name, the Vermilion Flycatcher is a member of the Flycatcher family.

This means that it is exclusively insectivorous and feeds on all insects, including caterpillars, wasps, spiders, ants, beetles, and, of course, flies.

They’re also extremely agile, which helps them catch their food on the wing.

The Vermilion Flycatcher is pretty easy to identify. It has a bright red underside and breast, neck, and cap. The rest of its plumage is black and has a short (but lethal) black bill.

This bird can be found across most of North America, and its range covers Maine to Florida and most States in between. It has also been recorded as far South as Mexico’s Yucatan Peninsula.

The Red-Breasted Meadowlark is a relatively large bird that can be identified by its bright red wing, shoulder, throat, belly, and breast.

The rest of its plumage is jet black and has long gray legs.

Native to Costa Rica, these birds are most commonly found in the open countryside.

They have also been spotted in pastures, cultivation areas, and moist grasslands. Anywhere they can perch and survey an area, food is where they’re happy!

These birds are insectivorous but will happily feed on seeds, fruits, and berries when insects are scarce.

Native to Eastern Africa, Red-Winged Starlings aren’t the kind of bird you’ll likely find hopping around in your backyard in North America.

They are, however, too beautiful to leave off our list.

They are covered with iridescent, black-blue feathers, and, as their name suggests, they have bright red primary wings.

Males are brighter in color than females, who have ash gray plumage instead but still retain the famous red wing.

The Red-Winged Starling builds its home in various habitats, including wetlands, grasslands, forests, savannahs, farmlands, and plantations. It has also been known to roost in urban areas and backyards.

You’d be forgiven for mistaking the White-Browed Meadowlark for its Red-Breasted cousin. They are almost identical in appearance.

The only difference is the white stripe that runs vertically across its cap on either side of its head; this is where it gets its name.

Native to South America, they can be seen flying around the open country, agricultural areas, and wet grasslands.

They virtually never venture into urban areas, so if you want to tick this bird off your “seen list, ” you’ll definitely have to take a trek!

White-Browed Meadowlarks are omnivorous and enjoy a varied diet of insects, seeds, fruits, nuts, and berries.

They also have a pretty unique courtship ritual around the breeding season, with the male flying around 30 ft up in the air before plummeting towards the ground with folded wings, singing while he does.

Although native to North America and with a range that covers the East Coast up to Alaska, the Red-Winged Blackbird remains quite an elusive bird.

You’ll know if you’ve seen one, though, as it has some unique markings. The entire body is covered with black feathers, while each shoulder has a scarlet-red patch.

Like most members of the Blackbird family, the Red-Winged Blackbird is omnivorous and will eat insects, seeds, grain, berries, fruits, and suet.

You’re most likely to spot a Red-Winged Blackbird in their preferred wetlands habitat, including ponds, riversides, marshes, and lakes.

Come winter, they migrate to Central America and set up home lakeside somewhere a little warmer!

If you’ve recently spotted a red and black bird that you just couldn’t identify, we hope the list above has helped!

Even if you haven’t, remember that many of these are happy to visit bird feeders as long as the right food is available!

So, why not fill up your feeders and see how many you can attract into your garden? You’ll be glad that you did!