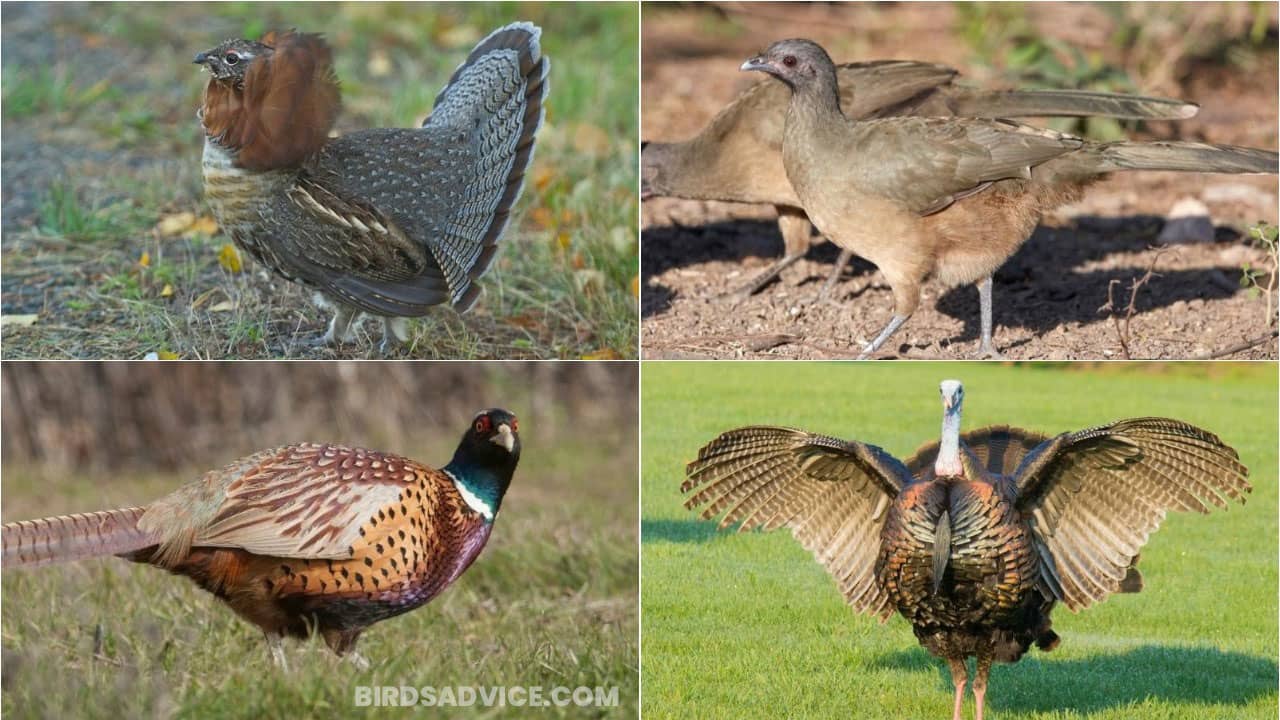 People have been surprised to discover that there are birds that look like chickens. Some of these bird species are rare. And some mixed breeds only can be found in the wild. They’re an interesting bunch to learn about.

Today we’re going to discuss those chicken-like birds, their characteristics, their similarities, and the major differences they have. If you are looking for the same information, we got you.

The plain chachalaca is a large bird species found in the Rio Grande, Peninsula, Texas, Belize, Honduras, and a few more places around these. This bird occupies a wide variety of areas like the riverine forest, shrubland, scrubby forests, and places near the water.

The main similarity between the chicken and the plain chachalaca is the size and appearance. Both of their heads and bodies are quite similar to each other. Also, the grayish-colored chicken is very common. And the long tail is usual among the few chicken species.

Although the Plain Chachalaca has the appearance of a chicken, the size difference is noticeable. A lot of chicken species can grow three to five sizes larger than the plain chachalaca.

A few chicken species have crowns on their head, which is absent on chachalaca. Also, the Plain Chachalaca has comparatively thin and small legs.

The wild turkey is the ancestor of the domestic turkey and one of the extant turkey species. This species is native to North American territories. The wild turkey can be found in hardwood forests, fields, pastures, orchards, and scattered opening areas.

The Scaled Quail is also known as blue quail. It is part new world quail family that can be seen around Central Mexico and the southwestern United States. It prefers sparsely vegetated shrublands, desert grasslands, and areas with mesquite, juniper, pinyon, prickly pear, and sand sage trees.

The Gambel’s Quail is another family member of the New World Quail. This species is found in the desert regions of California, Nex Mexico, Texas, Colorado, Arizona, Sonora, and Utah. Their preferred areas are mesquite thickets beside the rivers, dry grasslands, shrublands, farming fields.

The main similarity between chickens and the Gambel’s Quail is their body shape and structure. The Gambel’s quail has crest-like some chicken species. Their legs are short and strong like the chickens.

The California quail is just like the Gambel’s quail. It is also part of the new world quail family. This ground-dwelling bird species can be found in forests of the Northwest and definitely in California. The sagebrush, chaparral, and oak woodlands are preferred areas of living.

Like the other two quail species, the California Quail has a similar body structure and shape. The view from the front can easily confuse you with a chicken. It also has a crest on its head like the few chicken species. The legs are short and strong like the chickens.

The size of a matured California Quail is the same as a young chicken. Chickens can grow more than a quail. As we have mentioned, some chickens have crest too. But the crest of the quail and the chickens are different.

Another ground-dwelling bird species can be found in Canada, Mexico, Cuba, the United States, and some parts of Europe and Asia. The Northern Bobwhite is also known as bobwhite quail. Their usual places are pine forests, grasslands, and overgrown fields.

The Northern Bobwhite and chickens are quite similar in shape and body structure. It has a short crest that resembles the chickens. The color pattern definitely will remind you of a chicken. Short and strong legs are common among these species.

Quails are smaller than chickens. Some chicken species can reach around 70 cm. The crest on the quail is quite different from the chicken. The Northern Bobwhite has an upward body structure. And the tail of this species is wider than the chickens.

The ruffed Grouse is a medium-large-sized bird from the grouse family. It’s a non-migratory bird that can be found in Alaska and Canada. Their common living places are mixed deciduous forests and coniferous forests. The ruffed Grouse also prefers areas with forested streams.

The body structure and size are mostly similar to chickens. The ruffed Grouse’s legs are short and strong like the chicken. The eyes are mostly the same as other species. The color pattern will easily match with a chicken species. It also has a crest.

The Northern Black Grouse, also known as Black Grouse, is a large game bird from the family of Grouse. This species can be found in Europe, Great Britain, Estonia, Scandinavia, and some places in Russia. They prefer places like between forests and open clearings.

The Black Grouse is almost looked like chicken. The body shape and structure are highly similar to each other. In some places, this species is called cock (the male version of chicken). Some have long tails like the others. It is hard to tell them apart if you look from a little far.

The Rock Ptarmigan is a medium-sized bird breed around North America, Arctic, and subarctic areas. This species also can be seen in Norway, Bulgaria, Japan, Scotland, and several rocky mountain areas. It prefers dry, barren, and stony areas for living.

The Rock Ptarmigan is stocky and has a chicken-like body shape and structure. The head of both species are smaller, and the legs are short and strong. Also, the tail lengths of these species are similar along with the structure.

The Ring-Necked Pheasant is also known as the common pheasant. This species can be found in Asia and some parts of Europe. This ground forager loves to spend time in the agricultural areas. The overgrown harvested fields, hedgerows, brushy areas, and rural roadsides are common places to find them.

The ring-necked pheasant is a chicken-like bird that has a similar body shape and structure to the chickens. The average length of this bird is also the same as most chickens. This ground dweller’s usual habitats are the same as chickens.

The long tail and neck are common with some of the chicken species. The legs are hairy and strong that will remind you of a chicken.

Like most of the chicken species, the Ring-Necked Pheasant doesn’t have appendages or crest on its head. The rick around the neck is quite unique that isn’t very common for the chickens. Other than these, there a very few differences between the Ring-Necked and Chickens.

There are a lot of birds that can remind you of chickens. Those chicken-like birds can easily confuse you with one another. These birds are especially the same with their body structure and shape.

These birds are mostly wild and ground-dwelling species. Some of them have a crest on their head, and others don’t. Almost all of these species have strong legs like chickens.

According to our research, these 10 chicken-like birds are the most common and have the highest similarities. If you know another species that should be on this list, please let us know in the comment section.