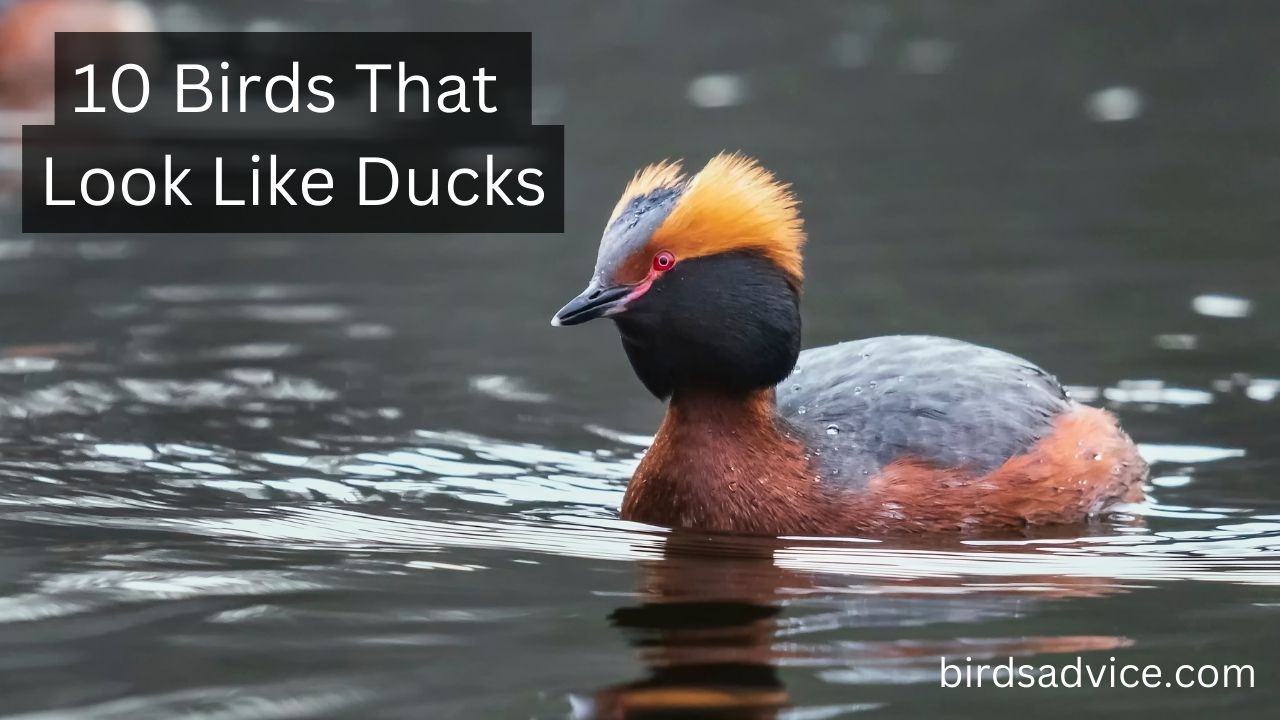 Ask anybody what their favorite waterbird is, and it’s quite likely that they’ll give you the answer “a duck!”

But, follow that up with “which kind of duck” and you might get an answer that isn’t a species of duck at all!

That’s right – many people don’t actually know that some of the waterbirds they’ve admired for years and have labeled as ducks are an entirely different type of bird altogether.

But what are these waterbirds that we have been falsely calling ducks this whole time?

Below, you’ll find 10 birds that look like ducks but aren’t related in any way. We’ll look at their identifying features, explore where you can find them out in the wild, talk about what they eat, and more.

Native to North America, the Pied-Billed Grebe can be spotted happily bobbing along ponds and lakes in almost every State.

Wetlands and any emergent vegetation are where it is happiest, and here it will spend the majority of its time in the water.

In fact, while the Pied-Billed Grebe is capable of flight, it hardly ever spends any time in the sky.

This waterbird won’t even fly across the water to get to its next destination. Instead, it will use its webbed feet to swim over instead.

The Pied-Billed Grebe also builds its nest close to the water in wetlands and freshwater lakes, laying two clutches of eggs each breeding season.

The mating couple will raise their brood until they are ready to fledge. They’ll also eat feathers during this time in order to help them regurgitate food for their young.

This bill isn’t unlike that of a chicken, and helps them forage through aquatic vegetation in search of insects and crustaceans to feed on.

Topping the scales at around 7kg, the White Pelican is one of the larger duck-impersonating birds on our list.

Their size is just one of their identifying features, though. They also have white feathers across the entire body, black-tipped wings, and a huge yellow-orange bill.

Native to North America, you’re most likely to spot a White Pelican in the wild by visiting inland lakes.

Here, they live in communal flocks that can be hundreds of birds strong. They also hunt in groups, rather than solo-diving for food.

Their food consists mainly of fish including Jackfish, Catfish, Yellow Perch, and Carp. They have large appetites as well, and can eat as much as 4 pounds of fish every single day.

The Brown Pelican is much smaller than the White Pelican, coming in at an average of 2.5kg. It is also the smallest of all species of Pelican, making it quite easy to mistake for a Duck.

As you may expect given its name, the Brown Pelican is covered with brown feathers marked with white. It also has a long, gray next and a large pale gray bill.

This waterbird can be found in a few different locations around the world including the Atlantic Coast of New Jersey, the Pacific Coast of British Columbia, the Amazon River, Galapagos Islands, and Northern Chile.

As is the case with most species of Pelican, the Brown Pelican lives in large flocks.

Their diet mainly consists of fish including silversides, mullet, sardines, pinfish, and minnows. They have also been known to feed on crustaceans, amphibians, and even young birds.

A member of the Rallidae family, the American Coot (also known as the Mud Hen or Pouldeau) is one of the most commonly mistaken waterbirds for Ducks.

It can be identified by its dark gray body, jet black head, yellow legs, and bright white bill. In addition to this, it also has large, webbed feet that add to its Duck-like appearance.

Quite a common waterbird, you’re most likely to spot an American Coot in the wetlands and open-watered spaces of North America.

They are migratory birds though, and will spend the breeding season in the Southwestern States before heading further South to Panama for the winter.

The American Coot has quite a varied diet, living on algae, sedges, duckweed, wild celery, hydrilla, wild rice, and a range of other seeds and aquatic vegetation.

Easily mistaken for a Duck, Goose, or Swan, the Brant weighs an average of 1 kg and can be identified by its gray breast, brown upper parts, black head, and a white patch on the rump.

This waterbird is most commonly found in the temperate zones of the Arctic Tundra and the Wadden Sea.

They also nest in these areas and, fairly uncommon for birds, Brant young are ready to leave the nest and start following their parents around on the water just two days after hatching!

The Brant’s diet mainly consists of fish and eels, although they also eat aquatic vegetation.

Another fairly large seabird, the Double-Crested Cormorant weighs around 2.5kg on average and is covered with black and dark-gray feathers.

The only flash of color on its body is its long, sharp, orange beak. This beak also has a hooked end that is perfect for helping them catch their prey and forage through underwater vegetation.

The Double-Crested Cormorant has a large range and can be found in various locations around the world including The United Kingdom, Canada, Mexico, The Bahamas, Florida, and other parts of North America.

It also isn’t particularly fussy about its chosen water source, happily living in freshwater rivers, lakes, and at sea.

Quite a sociable bird, the Double-Crested Cormorant is often spotted living in mixed colonies alongside other waterbirds.

They have a varied diet that consists of amphibians, crustaceans, and fish along with some aquatic vegetation.

A member of the Podicipedidae family, the Horned Grebe is another small bird that can easily be mistaken for a Duck.

Quite common across Western China, North America, and Northern Europe, the Horned Grebe can be identified by its pale-yellow head stripe that contrasts beautifully with its black head.

It’s this head stripe that gives it its name as well, as the feathers run slightly longer than the rest of the head, giving it a horned appearance.

Their preferred habitat is freshwater lakes, ponds, and rivers. Here they feed on a varied diet of aquatic vegetation, small fish, small crustaceans, and invertebrates.

The Western Grebe is the largest species of Grebe in North America but, weighing an average of just 1.5kg, it’s quite easy to see how it would be mistaken for a Duck.

Also known as the “Dabchick”, “Swan-Necked Grebe”, and “Swan Grebe”, this waterbird can be identified by brown upper parts, long white and black neck, black head, and long yellow bill.

It also has bright-red eyes that dazzle against their black faces.

The Western Grebe sets up its home in the surrounding vegetation of lakes and open water.

They also nest and raise their young in these areas and, once their fledglings are old enough, they’ll climb onto their parents’ back and take the water for an easy swim.

Found throughout Texas, Southern Carolina, Louisiana, and New Mexico, the Western Grebe can also be identified by its call. This sounds like a short series of “kr-r-rick, kr-r-rick” clicks.

They make this sound to communicate with other Western Grebes in the area, warning them of potential danger.

Like many aquatic birds, the Common Moorhen goes by many other names. These include “Swamp Chicken”, “Water Hen”, and “Gallinula Chloropus”.

It can be found living in marshy environments including wetlands, ponds, canals, and lakes. As long as there is plenty of aquatic vegetation around, it’ll happily set up its home here!

Identifiable by blue-black feathers, long yellow legs, and a bright red bill with a yellow tip, the Common Moorhen is a migratory waterbird.

It spends the breeding season of spring and summer in North America and, as soon as the temperatures begin to drop, it heads further South for the winter.

Despite being quite numerous, the Common Moorhen is renowned for being a secretive bird.

Unlike many other birds that are mistaken for Ducks, it doesn’t live in large colonies, choosing instead to live a fairly solitary life and often taking cover in dense aquatic vegetation when it feels threatened.

This bird’s diet is pretty varied and consists of small aquatic creatures as well as vegetation and seeds.

Also known as “Great Northern Divers”, the Common Loon can be identified by the gray-blue feathers that cover its entire body.

These feathers also have an iridescent quality, shining with shades of green and purple when the light hits them in the right place.

Found living in colder regions of the world, the Common Loon is a non-migratory bird that lives in Canada, Alaska, New England, Iceland, and Scotland.

Here, it roosts and nests all year round, feeding on fish, crustaceans, insects, mollusks, and aquatic plants.

Interestingly, rather than having a single call, the Common Loon has developed a total of four different calls.

Each of these serves a different purpose, as well. These distinct calls have been categorized as “tremolo”, “wail”, “yodel”, and “hoot”.

The tremolo call is used in courtship and territorial disputes, and the wail is used by pairs to communicate with each other and with their offspring.

The yodel call is used to communicate across a large flock, while the hoot is used to signal danger across the flock.

As you can see, there are quite a few aquatic birds that can easily be mistaken for Ducks.

The main thing to remember, however, is that just because you’ve spotted a bird bobbing on the surface of the water – it doesn’t necessarily mean it belongs to the Duck family!

So, next time you’re near a lake, river, pond, or even the sea, and you see a bird you’re unsure of, be sure to open this list – you may have just spotted one of these amazing waterbirds.