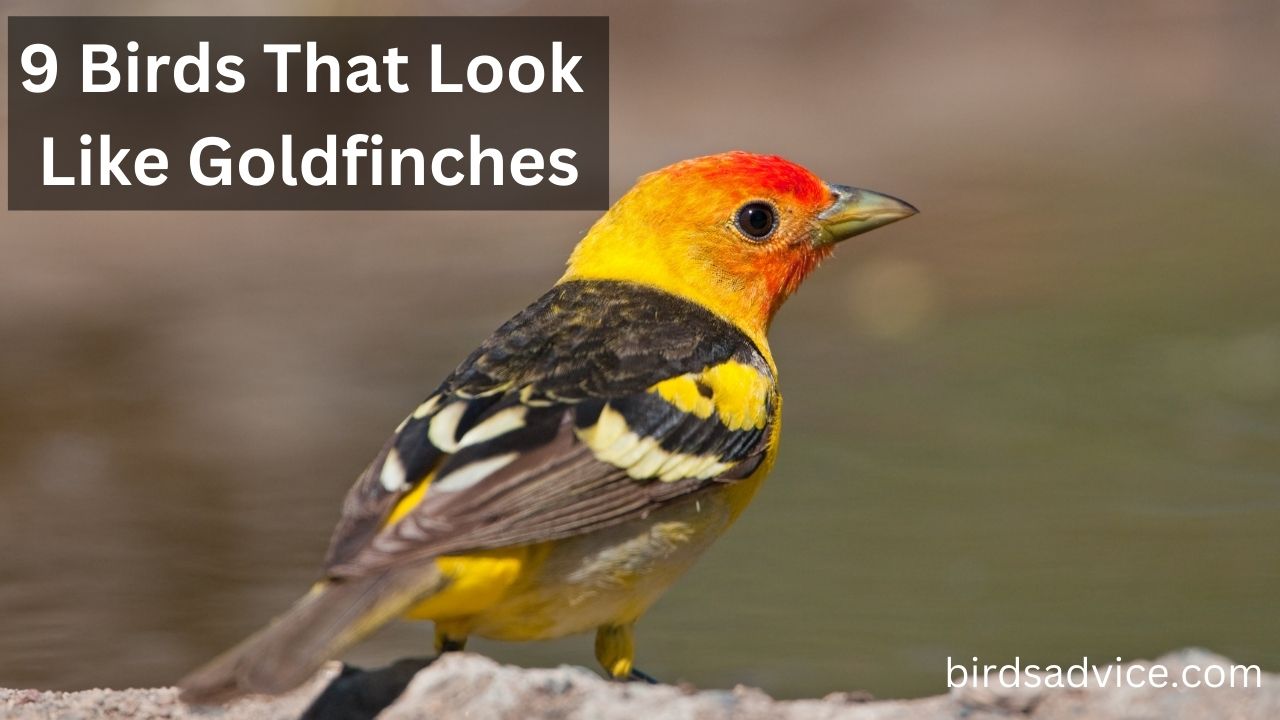 Goldfinches are one of North America’s most beloved birds.

Their beautiful colors and markings alongside their cheeky, sociable personalities make them a joy to watch as they feed in your garden.

And, since most are non-migratory, they’re also known for bringing a flash of much-needed color to your garden during the dark, winter months.

But, did you know that there are several birds in the world that look a lot like Goldfinches, but aren’t actually members of the Finch family at all?

Who are these Goldfinch-impersonating feathered friends? And how can you be certain that it’s actually a Goldfinch you’ve spotted, and not a small, colorful bird masquerading as one?

Well, you’ve come to the right place! Here, we’re going to take a look at 9 birds that look like Goldfinches.

We’ll explore their identifying features, talk about where you’re most likely to spot one, and look at their diets – helping you entice them into your own garden.

It’s quite easy to see how a Western Tanager could be mistaken for a Goldfinch.

With its scarlet head, bright yellow breast and underparts, and white-barred black wings, it makes an almost perfect doppelganger. It’s around the same size as a Goldfinch as well, making it all the more alike.

Native to South and Central America, the Goldfinch is a fair-weather visitor to North America, visiting for the breeding season.

It is most abundant in Texas, although it has been spotted in many other States and has even been seen as far North as Canada’s boreal forests.

While forests and mixed woodlands are the Western Tanager’s preferred habitat, they have also been spotted in parks and gardens.

This is particularly true during migratory seasons, as they’ll stop at feeders to refuel for the long flight home.

The Western Tanager has a varied diet and, although it is almost exclusively insectivorous during the summer months, it will also feed on seeds and fruits when needed. It also feeds on the sap from certain trees.

Another interesting fact about the Western Tanager is that they are one of the most territorial birds in the world, and won’t think twice before acting aggressively in a bid to protect their territory from other birds.

Found quite commonly throughout Canada and the United States, the Pine Warbler is often mistaken for a Goldfinch due to its yellow-green coloring.

This color covers almost all of their body including the underparts, breast, back, throat, and head.

The Pine Warbler also sports light gray wings with white wing bars that are similar to those of a Goldfinch.

While you can spot the Pine Warbler throughout North America all year round, those that live in the far North may move further South during the winter if temperatures start to dip too low.

They will, however, return the following breeding season.

If you think you’ve spotted a Pine Warbler in your garden but you’re still not 100% sure, take a look at its feeding habits.

Unlike the Goldfinch, who will hang on a feeder and peck at seeds, the Pine Warbler is a ground feeder.

This means that it will be foraging on the ground or in low shrubs for its food.

Usually found nesting near a source of water, the Orchard Oriole is another colorful bird that is often mistaken for a Goldfinch.

It can be identified by its bright orange head, underparts, breast, and shoulders. It also has scarlet markings across the face, and its wings are black and white, while the tail is completely black.

You’re most likely to spot an Orchard Oriole in Central and Eastern States, although they have also been spotted in other parts of North America.

As non-migratory birds, they can be spotted all year round, although they are particularly busy during the breeding season of March to June.

Sadly, the Orchard Oriole has seen its number decline quite drastically since the early 1960s.

The reason for this is habitat loss, with much of its natural habitat being cleared to make way for the increasing human population or for agricultural use.

The first of two true Goldfinches on our list, the Lesser Goldfinch has quite a wide range that covers North America, South America, and some parts of Asia.

The male Lesser Goldfinch can be identified by its olive-green breast, buff-colored head, and black-steaked wings.

Females have the same marking, although they sport a yellow-brown color instead of green.

Like many members of the Finch family, the Lesser Goldfinch feeds mainly on seeds, although it will also eat insects and spiders throughout the summer.

Attracting this bird into your garden isn’t too difficult, and you’ll stand a much better chance of enticing them in with an offering of Nyjer seeds.

The Lesser Goldfinch breaks the mold in terms of Finch nesting habits, choosing to nest very high up away from the ground. This ensures that they are kept as far away from predators as possible.

They also create a lidded nest out of weeds and grass woven together, helping to keep them and their young warm and dry.

While the Summer Tanager does look quite similar to the Goldfinch, its biggest differentiating feature is its size. This bird measures around 6.5-inches long, which is quite a lot bigger than the Goldfinch.

The Summer Tanager can also be identified by its coloring; males have deep red plumage all over their body, while the female is a deep yellow.

Both sexes have dark streaks on the wing and tail which, again, give it a similar appearance to the Goldfinch.

Found throughout the Eastern United States, the Summer Tanager has a varied habitat and can be spotted in meadows, orchards, fields, forests, gardens, and parks.

It also nests in these locations, constructing a nest in low, dense vegetation and lining it with pine needles for extra insulation.

The Summer Tanager’s diet is as varied as its habitat, and it will happily feed on insects, seeds, and fruits.

It’s quite easy to attract to your garden as well with a good offering of seeds, and you’ll increase your chances of attracting Summer Tanagers by planting fruiting trees or bushes.

One thing that separates the Evening Grosbeak from many of the species on this list of birds that look like Goldfinches is that it is actually a member of the Finch family.

This is one of the reasons why it is so commonly mistaken for a Goldfinch but, look a little closer, and you’ll spot some clear differences.

The Evening Grosbeak can be identified by large white wing bars, which are much thicker than a Goldfinch’s.

It is also almost twice the size of a Goldfinch, and its colorings are a little different, with olive-green plumage across the majority of its body.

Found throughout Easten North America and most numerous in Oklahoma and Texas, the Evening Grosbeak’s preferred habitat is mixed woodlands or forest edges near a source of water.

Like all members of the Finch family, the Evening Grosbeak’s diet mainly consists of seeds, although they do also eat insects in the summer.

You can attract the Evening Grosbeak into your garden with Nyjer seeds.

It’s really easy to tell where the Scarlet Tanager gets its name from. Covered with bright red feathers and sporting jet black wings, it’s this flash of red that often sees them mistaken for a Goldfinch.

They are also common throughout North America and have a range that covers Northern Florida to Central Texas.

The Scarlet Tanager’s preferred habitat is forest edges near a source of water such as a lake, river, or stream.

Here, they hunt on the wing for insects that make up the majority of their diet, particularly during the spring and summer months.

Come winter, the Scarlet Tanager will turn to eat seeds, nuts, and other high-fat foods.

They’ll also happily visit bird feeders that are well stocked with a variety of seeds and suets.

Another bird that is around the same size as a Goldfinch, the Pine Siskin can be identified by its brown-streaked breast and back, forming an almost leopard print-like pattern.

These markings are the clearest differentiating feature when compared to a Goldfinch, but their habitats are quite different as well.

As their name suggests, the Pine Siskin’s preferred habitat is the pine forest of North America and it is particularly abundant in New England, Maine, and Northern parts of Canada.

It also remains in these areas all year round, making it one of the easiest birds to spot in winter.

The Pine Siskin feed almost exclusively on seeds, and they can be attracted to your garden with a bountiful buffet of seeds on offer.

We round off our list with another true Goldfinch; the American Goldfinch. Native to North America, this colorful bird can be identified by their bright yellow plumage and black caps.

These markings are only on the male American Goldfinch, however, and the female is much duller in color with a brown cap.

While native to North America, the American Goldfinch has a very wide range and can also be found in Australia, New Zealand, Europe, Africa, and Asia.

Throughout all of these continents, its preferred habitat remains the same – suburban areas including gardens and parks.

This makes them very easy to attract to your garden, although you can increase your chances of enticing the American Goldfinch in by offering loads of different seeds such as sunflower, Nyjer, and dandelion.

If you allow an area of your garden to “go wild” with unkempt grasses and weeds you’ll also increase your chances of bringing this beauty into your backyard. This is because they’ll use these materials to build their nests.

There you have it – 9 birds that look like Goldfinches. As you can see from what we’ve detailed above, it’s quite easy to see how some of these birds could be mistaken, but each of them also has identifying characteristics that set them apart.

So, next time you see a little bird flitting around your local park or your backyard and you’re not 100% certain it’s a Goldfinch, be sure to check out this list. You may have just spotted something you’ve never seen before!