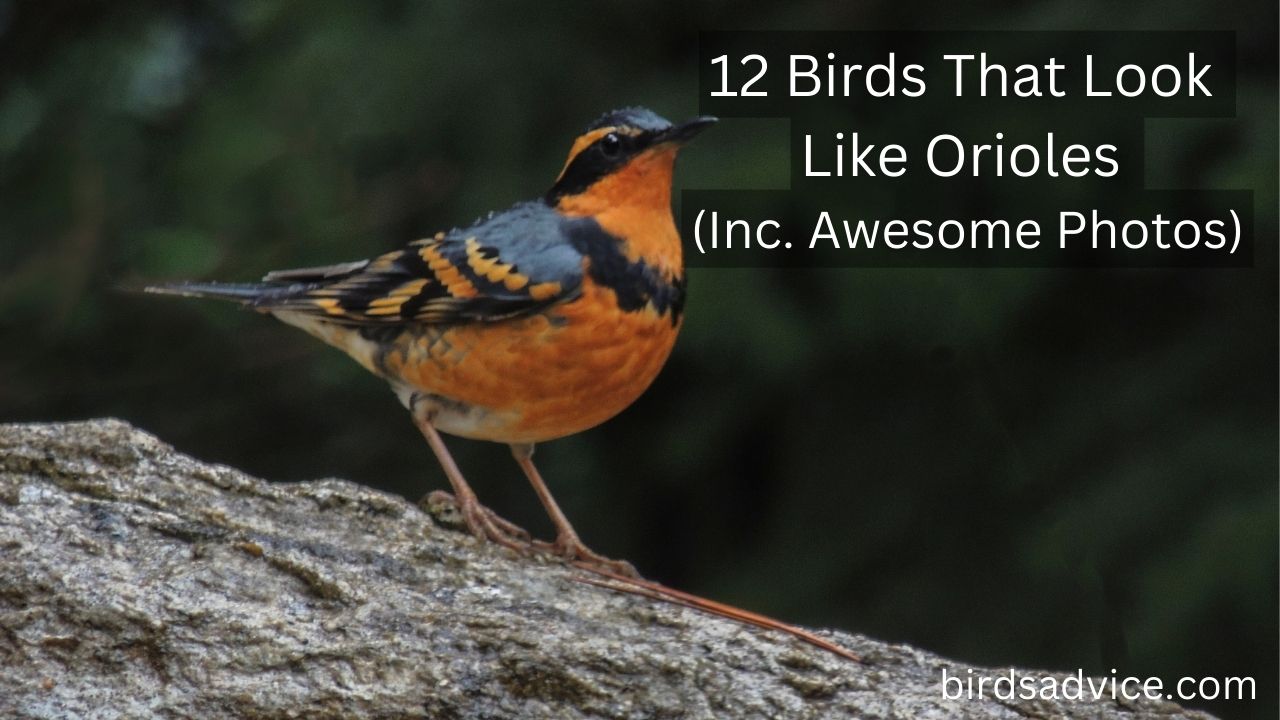 Orioles are one of the most colorful little birds in all of North America.

Usually sporting bright yellow or orange feathers, they add a flash of color to your bird feeders, not to mention they’re a particular joy to behold on cold, dark days.

But, did you know there are loads of birds out there that look like Orioles, but aren’t actually Orioles at all?

Below, we’ll explore these imposters in more detail by looking at 12 birds that look like Orioles.

We’ll look at the features that cause this confusion, and talk about how to identify each of them, their habitats, feeding habits, and more.

By the time you’re done, you won’t only know exactly what bird you’ve just seen – you’ll know how to entice each of them into your garden for an even closer look!

This migratory bird is most common in North America throughout the breeding season of spring and summer.

Come winter, it heads further South to warmer temperatures, although those that reside in Southern Texas and California may remain all year round.

The Varied Thrush can easily be mistaken for an Oriole due to its bright orange breast, neck, and eye stripe.

It also has black upperparts, black cap, a second eye stripe in black, and white underparts.

You’re most likely to spot a Varied Thrush in mixed or deciduous woodland near a body of water, and it is especially abundant in the East of the Rocky Mountains.

Here, it spends the majority of its day perched on rocks alongside lakes, rivers, streams, and ponds on the lookout for insects to feed on. It also nests in this area, usually on the ground or in low vegetation.

The Varied Thrush feeds on seeds as well as insects and has a particular penchant for sunflower seeds, so be sure to fill your feeders with these if you’d like to entice this colorful little bird into your garden.

Covered with bright yellow feathers, the Evening Grosbeak is another bird that is commonly mistaken for an Oriole.

This vibrant yellow plumage covers the breast, underparts, and part of the back. It also has a matching yellow eye stripe, while the wings are black with white barring and the head and neck is a dark brown color.

A member of the Finch family, the Evening Grosbeak is quite common across Easter North America and here it remains all year-round.

The best place to find this little bird is in deciduous forests, although it has also been known to venture into urban parks and gardens. It can also be found in Canada, but will head South during the winter.

The reason for their name is because they are particularly vocal at dusk, singing their song in large flocks. They feed on insects and fruits, but the majority of their diet comprises seeds.

This makes them quite easy to attract to your garden, and you have a really good chance of doing this by offering their favorite food of Nyjer seed.

Measuring an average of 5-inches long, the American Restart is a small warbler and is another bird that is often mistaken for an Oriole.

It can be identified by the orange patches on its breast, tail, and wings, while the rest of its body is covered with jet-black feathers.

The American Redstart is most common in North America during the migratory periods of spring and fall.

They are particularly abundant in Texas, Nova Scotia, and Florida. Come winter, they can be found in South America, Central America, and Mexico.

During the breeding season, the American Redstart sets up its home in dense bushes or shrubs near a source of water, such as a lake, stream, or creek.

Here, it feeds on insects and it is quite an expert at snatching beetles and mosquitos out of the air in mid-flight. It also feeds on the sap from birch trees.

Found all over all parts of North America except for the Southwestern deserts, the American Robin is quite a common sight.

It is also commonly mistaken for an Oriole due to its famous rust-orange breast, dark gray upperparts and wings, and black head with white eyepatch.

They’re also about the same size as an Oriole, which only adds to the confusion!

Interestingly, while the American Robin is quite common throughout North America, there is only one breeding population.

These birds nest from April to July and, come fall, head further South to warmer climates. However, they don’t migrate very far, never normally traveling more than 1000 miles from their breeding ground.

The American Robin is almost exclusively insectivorous during the summer months and, come winter, it feeds on seeds, nuts, and berries.

To attract this little bird to your garden be sure to fill your feeders and bird tables with a good variety of food.

The Eastern Towhee is a striking bird with a black, mohawk-like crest. It also has a black face, black upperparts, and a black breast.

This bird has quite a large range that covers most of Eastern North America and well as Southeaster Canada, central Texas, and Florida.

It is also non-migratory, although those that reside in the far North may head to warmer parts of North America during the winter.

The best place to spot an Eastern Towhee is in brushy habitats including forest edges, woodlands, and meadows.

Here they scour the land for insects and seeds to feed on. When food supplies dwindle, they’ll also visit garden bird feeders to snack on seeds.

Another very striking bird, the Yellow-Headed Blackbird can be identified by its bright yellow breast and, of course, its namesake bright yellow head.

The rest of its body is covered with jet-black plumage, it has a black patch across each eye, and a sharp yellow beak. Some also have white markings on the wings, but this differs from bird to bird.

Often mistaken for an Oriole due to its yellow coloring, the Yellow-Headed Blackbird is a year-round resident in the Southeastern United States.

Here it roosts and nests in woodland near a source of water, such as a river, marsh, pond, or lake.

It also feeds in these locations, with its diet consisting of insects, seeds, and fruits.

You can attract the Yellow-Headed Blackbird to your garden by offering a variety of seeds, and you’ll increase your chances of enticing it in by planting fruiting trees and bushes.

Almost crow-like in appearance, the Black-Headed Grosbeak is often mistaken for an Oriole due to its bright orange underparts, breast, neck, and throat.

It also bears a namesake black head with orange stripes, black wings, and a black tail, both of which are patched with white.

Found throughout Canada and the United States, the Black-Head Grosbeak is most commonly spotted in deciduous and coniferous forests.

Here, it feeds on the seeds from inside pinecones, using its powerful beak to prise them open. It also feeds on insects and fruits, and will visit bird feeders stocked with a variety of seeds during the winter.

Interestingly, not all Black-Headed Grosbeaks have orange stripes on their head. These are only present in those that live in the Northern States and Canada.

Despite being one of the most famous bird species in the world, the Barn Swallow is quite often mistaken for an Oriole.

The main reason for this is due to its bright orange face. It also has white underparts, a white breast, and blue-black upperparts.

Found in North America all year-round, even in the winter months, the Barn Swallow takes its name from its habit of building its nest in barns and outbuildings.

These structures provide excellent shelter for them all year round, from raising their young to waiting out a winter storm.

The Barn Swallow rarely feeds from bird feeders or tables, so attracting it into your garden is quite difficult.

Instead, it is an expert on feeding on the wing, catching insects in mid-air.

Also known as “The Goldfinch of Texas”, the Golden-Cheeked Warbler is named for its bright yellow cheeks.

It also has a black eye stripe, black cap, and black breast. Its underparts are white, while the wings are black with white barring.

The Golden-Cheeked Warbler is a migratory bird that spends the winter in Mexico before heading towards Southern and Eastern Texas for the spring and summer.

Here, it builds its nest in the dense undergrowth of oak forests, choosing a spot near a source of water.

Not particularly fussy eaters, the Golden-Cheeked Warbler has been known to feast on a variety of food sources including seeds, insects, spiders, berries, worms, and even lizards.

This voracious appetite means that drawing them into your garden isn’t too difficult as long as you have a good range of food on offer.

One of the most colorful entries on our list of birds that look like Orioles, the American Goldfinch sports bright yellow feathers across the majority of its body.

The only exception is a small black patch on the top of its head, and its black wings with white bars.

This colorful little bird feeds on insects and seeds, although it will also eat berries and fruit if they are available.

It is also known as one of the easiest birds to attract to your garden with a promise of food, and you can increase your chances of doing this by offering Nyjer seed.

The American Goldfinch has a large range that covers most of North America, and they are present in almost every State.

They are also non-migratory so can be seen all year round – their bright colors being particularly dazzling against a backdrop of snow in the winter.

Another bird that is commonly mistaken for an Oriole, the Spotted Towhee takes its name from the white spots that cover its wings and upperparts.

It also has white underparts, a black breast, neck, and head, orange patches on each side, and is around the same size as an Oriole.

Despite being present all-over North America, it’s quite rare to see a Spotted Towhee.

The main reason for this is because they tend to stay away from urban and heavily-populated areas, choosing instead to live in meadows or forests with lots of trees to shelter in.

Quite easy to identify due to its colorful plumage, the Western Tanager has a bright orange face, yellow breast, yellow underparts, and black wing with white barring.

The Western Tanager feeds almost exclusively on insects, particularly during the spring and summer months, and it is an expert at catching insects on the wing.

It also feeds on seeds, berries, and fruits, and can be enticed into the garden quite easily with an offering of safflower seed mixes or black sunflower seeds.

It’s clear to see how each of the birds we’ve listed above could be mistaken for an Oriole.

Each is colorful and either has the yellow or orange markings that are so synonymous with Orioles. However, they aren’t related in any way!

So, next time you see a colorful little bird flitting around your garden or out in the wild that you think might be an Oriole, be sure to check out this list. You may have spotted something entirely different altogether!