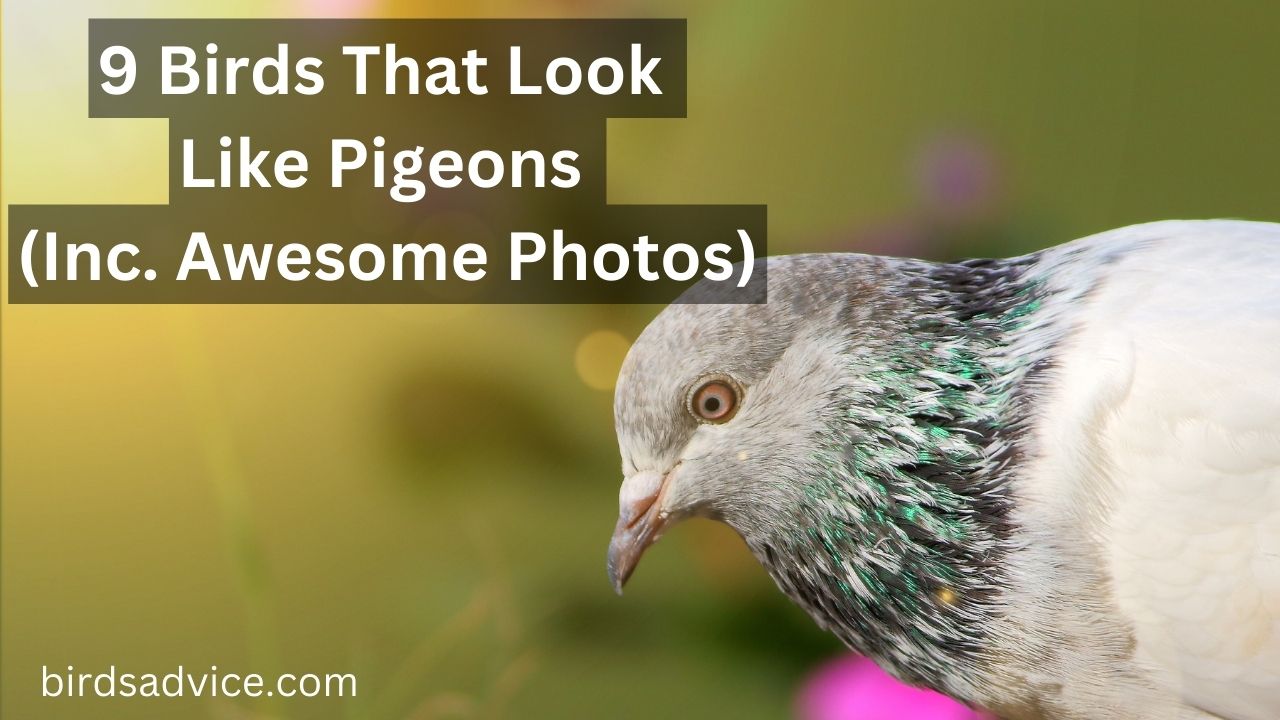 The humble pigeon is a common sight all over the world. It can also be found in loads of different environments, from woodlands to urban areas, they are one of the most widespread birds out there.

But, did you know that there are several birds that look like pigeons, but actually aren’t?!

Below, you’ll find a list of 9 birds that look like pigeons. We’ll explore their identifying features, look at where you’re most likely to spot one in the wild, and even give you some pointers on how you can entice them into your own garden.

Measuring around 11.5 inches long, the Eurasian collared Dove can be identified by the pink-gray feathers that cover its entire body.

It also has a jet-black eye and a black neckband, from which it takes its name.

Though common throughout North America and Europe, the Eurasian Collared Dove is actually native to tropical and subtropical American areas.

Here, they live in open fields and scrublands, giving them the perfect place to search for seeds and insects to feed on including termites, spiders, caterpillars, moths, and beetles.

You can attract the Eurasian Collared Dove into your garden quite easily with an offering of mealworms and seeds, and they have a particularly large appetite for sunflower hearts.

One of the most striking birds on our list, the Spotted Dove is a common sight across North America.

It has gray-brown plumage all over its body which is beautifully banded with black markings, giving it an almost tiger stripe-like appearance.

These markings serve an important purpose as well, as they make it quite difficult for predators to see them amongst tree branches.

It is equally as effective camouflage when they are out in the open foraging for seeds or insects on the ground, as the barring effect makes it difficult for any birds of prey soaring high above to see them.

For those that live in the Northern States, the best time of year to spot Spotted Dove is during spring and summer.

This is because they are migratory birds and, come fall, they start heading further South towards California and Florida for the winter.

This pigeon-like bird is omnivorous and you can attract them into your garden by offering a good variety of seeds for them to feed on.

Native to Western North America, the Band-Tailed Pigeon is covered with pale gray-blue feathers, has a light purple throat, and a green patch at the back of the neck.

It also has a bright yellow bill, measures around 15-inches long, and has a 10-inch wingspan.

You’re most likely to spot a Band-Tailed Pigeon in woodland near a source of water, such as a lake or river.

Here, they have easy access to their preferred food sources of insects, nuts, and seeds. You can also attract this bird into your garden by filling your bird feeders with a range of seeds and nuts, as well as suet and mealworms.

Measuring an average of 10-inches and with an 18-inch wingspan, the Mourning Dove is a medium-sized bird that looks quite a lot like a pigeon.

It is covered with pale brown plumage, has light gray wings tipped with black, and has a pale purple patch on the back of the neck. It also has the same red feet that many pigeons have.

The Mourning Dove has a very wide range and can be found in Southern Europe, North America, South America, Central America, Asia, and Africa. In all of these locations, its habitat remains the same; agricultural areas and open fields.

Here, it feeds on seeds, weeds, and grasses. It may also visit gardens planted with fruiting bushes, and you can draw them into your backyard by offering a variety of different seeds for them to peck away at.

Found all over the United States from the East Coast of Florida to Texas, the Common Ground Dove is quite a common sight in scrublands and agricultural areas.

It will, however, venture further inland to urban areas and backyards when food starts to become scarce.

The Common Ground Dove can be identified by gray-brown head and pink-gray feathers that cover its entire body.

It also has a distinctive barring pattern across the wings that act as a camouflage, and it measures around 16-inches long with an 11-inch wingspan.

Their diet mainly consists of fruits, seeds, and cereal crops. You can also attract the Common Ground Dove to your garden by offering a variety of seeds but, as their name suggests, they feed from the ground rather than from hanging feeders.

One of the most recognizable birds in the world, the Rock Pigeon is exactly what you’d picture if somebody asked you to think of a Pigeon.

It has pale gray wings with black barring, dark gray underparts, a purple neck collar, a green neck, and a blue-gray head. It also has red feet, measures around 12-inches long, and has a wingspan of 25-inches.

The Rock Pigeon is happiest living in urban areas where it can seek protection from predators, such as hawks.

Its roosting and nesting spots include trees, gutters, bridges, ledges, roofs, and any other stable supports that offer shelter.

It won’t take much to encourage the Rock Pigeon into your garden, but you can increase your chances of having this bird visit your backyard by offering nuts, seeds, and fruits.

The Ruddy Ground Dove is easy to recognize thanks to the vibrant red-orange feathers that cover its body.

It also has a light-orange head, black barring across the wings, measures around 7-inches long, and has an average wingspan of 11-inches.

They have quite a varied habitat and can be found in urban areas, gardens, open fields, and pastures. They have a varied diet as well, feeding on insects, seeds, berries, and even carrion.

This means that attracting this Pigeon-like bird into your garden isn’t too difficult, as long as you’ve got a good variety of food on offer!

One of the smaller entries on our list of birds that look like Pigeons, the Inca Dove measures just 7.5-inches long and has an 11-inch wingspan.

It can be identified by its tan-colored feathers, each of which is outlined with a darker brown creating a scaled pattern. It also has pale underparts and a maroon-red eye.

The Inca Dove has a wide range including Peru, Chile, Colombia, and Argentina. It has also been spotted in many parts of the United States, but is most abundant in the Southern States.

They are migratory birds to the U.S though, so the best time to spot one would be during the breeding season of March-June.

Their preferred territory is agricultural land and they actually play quite an important role in the ecosystems here, spreading seeds around as they eat.

These seeds then grow and become crops for the next year, as well as offering shelter for small mammals and insects.

They have a varied diet that consists of seeds, insects, fruits, and berries. The Inca Dove can be attracted to your garden by offering a variety of seeds, placing fruit on your bird table, or by incorporating fruiting shrubs into your garden.

As you may have guessed from its name, the White-Winged Dove sports a distinct white line along each of its olive-green wings.

It also has olive-green upperparts, pale gray underparts, and a pale gray head neck. Measuring 11-inches long and with an average wingspan of 19.5-inches, the White-Winged Dove is a medium-sized bird.

It roosts and nests in trees where its green-colored plumage can make it difficult to spot, but it is most commonly sighted foraging on the ground for food.

Like most members of the Dove family, the White-Winged Dove is a ground feeder.

Its diet is varied as well and consists of grains, seeds, berries, and insects. It also has a telltale cooing call that is used to communicate during the breeding season or to signal danger.

You can entice the White-Winged Dove into your garden fairly easily by offering a good buffet of food.

Seeds, nuts, and grain will be happily received (particularly sunflower hearts), and you can increase your chances of drawing them in by planting fruit trees or fruiting bushes.

There you have it – 9 birds that look like pigeons. The majority of these are quite widespread throughout North America and, with the assistance of our identifying guides, you should be able to easily recognize them when you’re out and about.

Likewise, they are quite easy to attract to your garden as long as you’re offering enough food. Each of the birds listed above has a varied diet and isn’t a particularly fussy eater – they just have a large appetite, so make sure you’re well stocked!