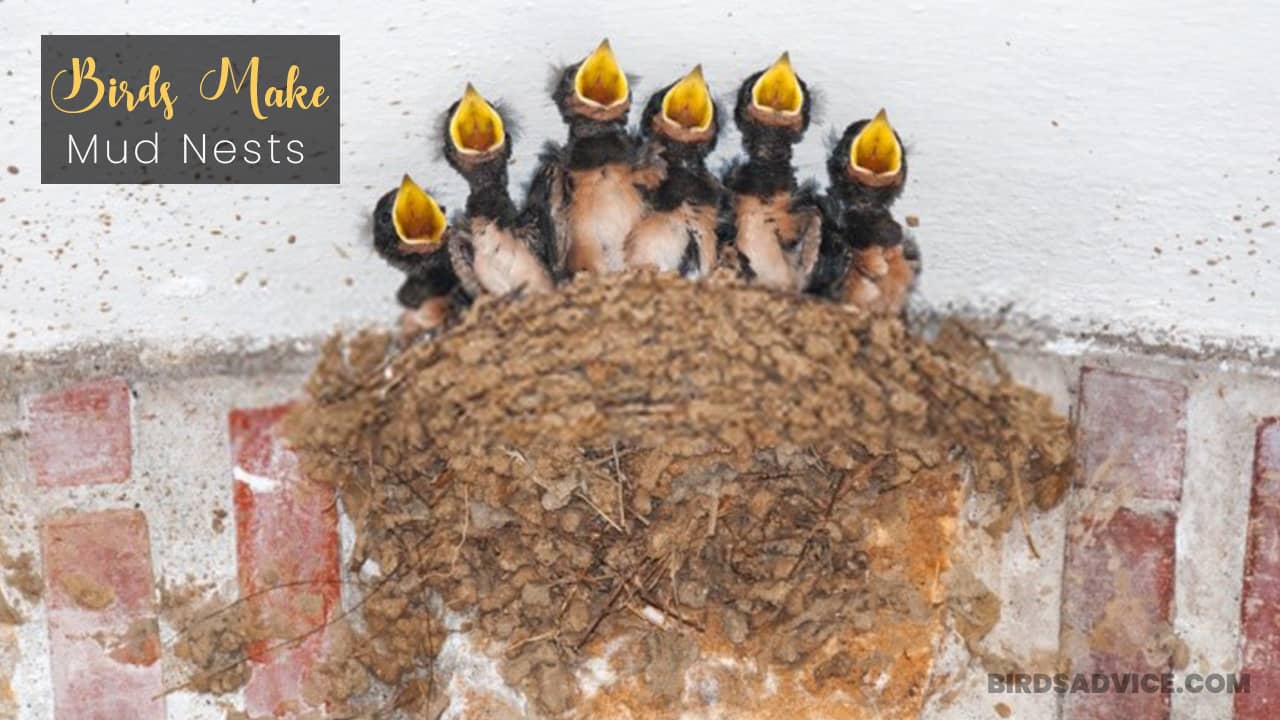 Birds seem to be wonderful when they’re with the family in the nests. Some birds construct round nests in trees, while others make hanging nests that swing with the air. You may find a few beautiful birds that make their nests with mud.

Do you want to know the birds that make hanging nests? We have recently written an article on a few pendulous nest birds. Once you finish reading here, we recommend you read that article, at least a glance. You could even learn about some unknown birds there.

Cliff swallows can be found from central Mexico to Alaska. These birds are also available in South America, particularly Brazil, Paraguay, Argentina, and Uruguay. They can mainly be out there in canyons, valleys, hills, and cliff faces.

According to allaboutbirds, cliff swallows make mud nests, and their nests look like upside-down igloos. The covered bowls these birds create may contain more than 1,000 mud pellets. In addition, their nests are usually found on a vertical wall and in the eaves of buildings.

Barn swallows are mostly found in Europe, Asia, Africa, and South America. These birds are mainly available in suburban parks, agricultural fields, and most water areas, skimming with a graceful flight. They can also make humans their neighbors, making nests on garages.

Typically, barn swallows make cup-shaped mud nests in many places, including barns, under bridges, cliffs, eaves, rafters, and other man-made structures. Both females and males build the nest using grass, mud pellets, and feathers usually against a wall or other vertical surface.

In fact, common house martins build closed cup nests from mud pellets in many human-made structures, including outer walls of buildings under the eaves, inside roofs or sheds, cliffs, and rafters. These birds are mainly colonial nesters, making 4 to 5 nests on average.

Purple martins are readily available throughout North America, particularly, across the Gulf of Mexico. These birds prefer open areas, meadows, grasslands, flooded pastures, and near ponds and lakes. Both female and male birds participate in nest building.

Before making nests, both sexes visit multiple cavities, like birdhouses, dead trees, and cliffs, to choose a nesting site. After that, they make their nest with twigs, straws, grasses, plant stems, and pine needles. Finally, they build a mud dam before the nest to make the nest secure.

When it comes to building nests, both females and males participate in making dome nests by creating mud cups and lining them with grasses. They usually nest in deciduous trees, shrubs, and even deserted buildings. The nests are usually 30 inches long and 20 inches wide.

American flamingos are readily available in North America, the northern coast of South America, and many Central American regions, including the Caribbean, Bahamas, Yucatan Peninsula, Hispaniola, and Cuba. They’re mainly found in both freshwater and saltwater lakes.

Typically, American flamingos make mud nests on the ground, pulling mud near their feet with their large bills. Both males and females participate in making ground mud nests. In warm weather, they build the nests high enough off the ground to keep the eggs moderately cold.

Spotted morning-thrushes, also known as spotted palm thrushes, mainly live in many African countries, such as Uganda, Tanzania, Kenya, Somalia, and Ethiopia. These birds are found in dense areas, including woodlands, scrub habitats, and savanna.

In fact, spotted morning thrushes make mud nests lined with leaves and grasses. Their nests then are thinly lined with rootlets, bark fiber, and other essential materials. Typically, these birds build nests 2 to 3 meters above the thick branches of large trees.

White-winged choughs are mostly found in Australia, particularly in Queensland. These birds prefer open woodlands, wetter areas, and even human habitats. Many people often mistake them for crows, ravens, and other Corvids.

Apostlebirds are mainly found in Eastern Australia. These birds prefer roaming in open dry forests and woodlands. They love to feast on seeds and insects. Since these birds usually travel in a flock of 12 like the 12 chief followers of Jesus Christ, they’re called apostles.

During the breeding season, apostlebirds create a breeding unit of up to 10 birds, including a dominant male and multiple females and immatures. Then, they make large, bowl-shaped mud nests on the horizontal branches of large trees (3 to 20 meters above the ground).

Black phoebes are native to the United States, particularly in Oregon and California. These birds are also found in the open areas, agricultural fields, city parks, and near lakes, ponds, and rivers of the Caribbean and Central and South America.

Typically, female black phoebes build open cup-shaped mud nests lined with grass, hair, and plant fibers. They usually make nests on cliffs and under the eaves of buildings. Once they’ve made the nests, the females lay 3 to 6 eggs and incubate them in around 15 days.

Now that you know the birds that make mud nests, you can allow these birds to nests in your yard. Cliff swallows, barn swallows, white-winged choughs, and apostlebirds make thoroughly mud nests, while others build partial mud nests with other essential materials.

However, we hope you’ve learned a lot about making mud nests and the birds that make this type of nest. If you have ever noticed a mud nest around your house, you can share it with us. Leave your valuable comments below if you have any further queries.