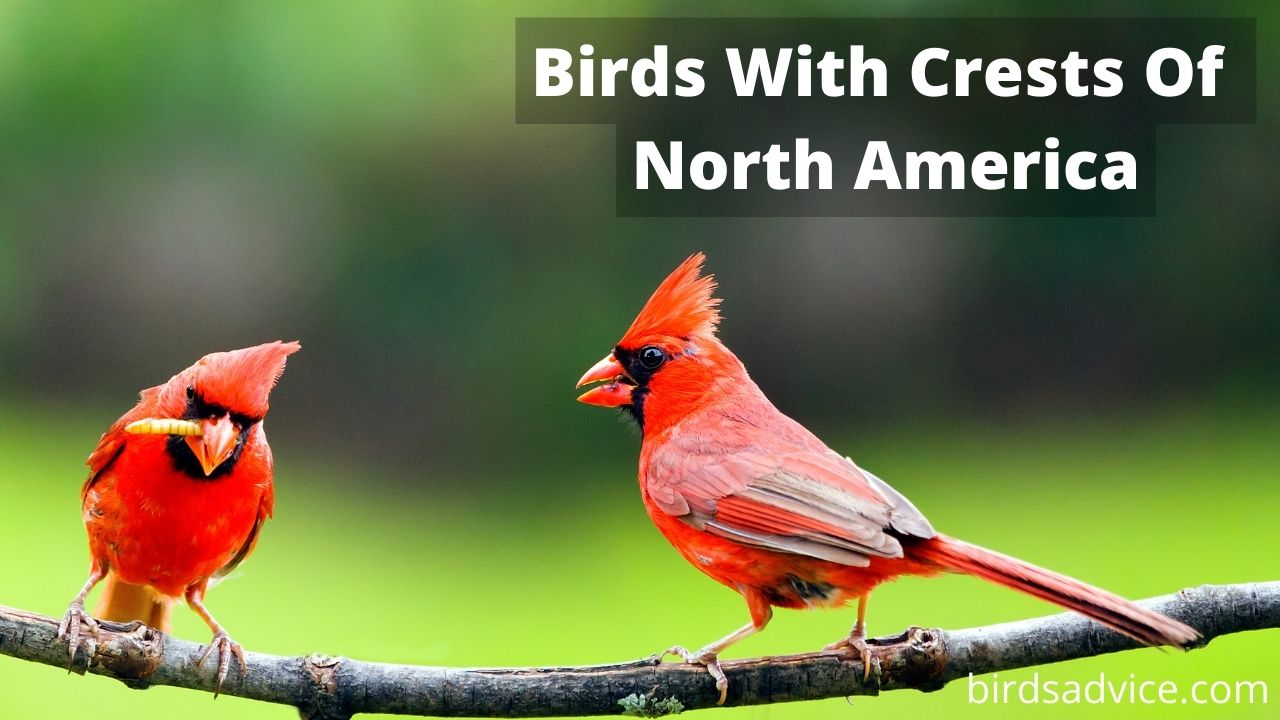 One of the most remarkable things about birds is their variety of colors, sizes, and plumages.

But, of all the thousands of different birds out there, those with crests stand out.

But which birds have crests? And just why do they have them? If you’ve ever asked yourself these questions, you’ve come to the right place.

Below, you’ll find 13 birds with crests that live throughout North America. Some you’ll have heard of, others you won’t. Either way, you’re bound to learn something new!

The first and arguably cutest-named, crested bird on our list is the Tufted Titmouse.

Found throughout the Eastern United States, this tiny bird has gray upper parts and a white belly and chest flanked with orange. It also has a small, black patch above its bill. And, of course, it has a tufted crest.

They’ll often venture into residential areas during winter to feed from bird feeders filled with seeds or nuts.

In the summer, however, they stay in their preferred habitats and in the safety of trees.

This tiny bird is one of the most colorful you’ll find in North America, and it has a bright red and orange chest, black wings, and black mask.

Its crowning glory, however, is its punk-rock-esque, bright red crest. Not the largest bird, the Vermilion Flycatcher measures an average of 5 inches in length and has a wingspan of just 9.5 inches.

Most commonly found in the Southwestern United States, Southern Mexico, Eastern Guatemala, and Central America, it sets up its home near water sources.

This gives them easier access to their preferred food source of mosquitoes and other small flying insects like dragonflies, as well as beetles and grasshoppers.

Like a lot of small birds, the Vermilion Flycatcher has a touch of the Napoleon complex and is extremely territorial. It will defend itself and its nest from predators at all costs, no matter how much bigger they are.

If they feel as though they are losing the fight, they’ll fly away, sounding an alarm call to draw the attention of other nearby birds and return to see the predator off as a group.

The Cedar Waxwing isn’t only found in North America, it has a huge global range, including Europe and parts of Asia.

Most identifiable by its pale tufted crest and black face mask, the rest of this bird is gray with white underparts. It also has a small patch of red on each wing.

You’re most likely to spot a Cedar Waxwing in the winter months, where they feed on berries of juniper trees and other evergreens.

Throughout summer, their diet consists of berries and insects, and this helps them maintain their weight and prepare for the winter ahead.

They set up homes in deciduous forests and orchards where fruits and berries are plentiful, but they will also visit parks and gardens if the correct food is available.

Found mostly in the Western United States and in Mexico, the Steller’s Jay is one of the easiest birds to identify, thanks to its colorful appearance.

This bird is large and is covered with shimmering blue feathers. It also has a large crest of blue-black feathers on top of its head, giving it a pretty exotic look.

Basically, anywhere with a decent number of trees to provide shade during the summer is where this bird likes to live.

Their diet consists mainly of acorns and nuts, but they have also been known to eat insects and even small rodents.

They also have a long lifespan for a wild bird, living up to 10-15 years.

One of the smallest birds in the world, the Gold-Crowned Kinglet measures an average of just 4 inches and tops the scale at 1 ounce.

Its small size does make it quite hard to spot, but it has some unique markings that, if you do think you’ve seen one, will make it easy to identify.

The first and most prominent of these is its bright yellow crest that is flanked with black, It also has an olive-green back and wings and a pale gray underside.

The wings are also marked with patches of black and white.

This tiny bird prefers to live in coniferous forests and lives on a diet of insects and seeds.

During the winter, the Gold-Crowned Kinglet migrates south towards Mexico and Central America but always returns home to breed in spring and summer.

As you may have guessed from the name, the Ruby-Crowned Kinglet has a bright red crest flanked with black.

All other markings and colorings are the same as its golden-crested cousin.

The Ruby-Crowned Kinglet prefers to live near a source of water such as a stream or a pond.

Here, they have a better chance of snatching up their preferred food of beetles, flies, spiders, ants, and other flying insects. They’ll also eat berries and seeds when need be.

Another member of the Tit family, the Oak Titmouse, is covered with grayish-brown feathers and has a matching crest used to communicate.

When raised, this crest acts as a warning to potential territory invaders. It also raises when the bird feels threatened.

The Oak Titmouse can live in mixed woodland and dense forests throughout North America.

It has a varied diet of acorns, seeds, nuts, berries, and insects. It has also been known to feed on the nectar of flowers suspended from low-hanging branches.

The Blue Jay is a typical garden visitor across North America and Europe. It’s one of the only birds found all year round in all 50 States!

It’s also one of the most striking and easily identifiable birds, thanks to its bright blue upper and matching crest. The undersides are pale grayish-white, and its wings and tail are marked with black and white bars.

They set up homes in woodlands, suburban areas, scrubby areas, and farmland and have a varied diet.

They’ll eat anything from insects to seeds and have also been known to eat eggs, small chicks, and carrion.

If you’d like to attract Blue Jays into your garden, your best bet is to fill up your bird feeders with various offerings.

Sunflower, safflower, peanuts, and mixed seeds are bound to draw this colorful, crested bird into your backyard.

The famous cartoon character “Woody the Woodpecker” was based on this bird; when you compare the two, it’s easy to see a resemblance.

Found in deciduous forests, parks, woodland edges, and suburban areas, this woodpecker can be found in most parts of North America, including New York, Colorado, Florida, Texas, and Virginia.

The Pileated Woodpecker is also the largest of all Woodpecker species in the United States.

It uses its sharp beak to drill into trees, looking for ants and beetle larvae, often leaving a hole in the tree in the process.

These holes are sometimes utilized by smaller birds to set up their nests during the breeding season.

The Great-Crested Flycatcher has a large, olive-green crest that makes it almost instantly recognizable. It has brown upper parts and wings, a gray throat and head, and a pale yellow belly.

Quite common across North America, this bird is most abundant in the Eastern States, where several breeding colonies have been recorded.

These colonies, and this bird’s preferred habitat, are mixed woodlands with plenty of cover from trees, and a reliable source of food is always close by.

The Great-Crested Flycatcher is almost exclusively insectivorous and has a particular fondness for flies, hence the name. It will also happily eat other insects as well, including spiders, caterpillars, and beetles.

While you aren’t very likely to have a Double-Crested Cormorant visit your garden, it is a common sight across rivers, lakes, and oceans in North America.

This sea bird is entirely black, aside from an orange face and bright blue eyes. It also has a small tuft of black feathers on top of its head.

The largest number of Double-Crested Cormorants are in Florida and this is where they tend to head to in order to breed as well. It also doesn’t mind living in colonies with other wading seabirds.

As you might imagine from a sea bird, the Double-Crested Cormorant’s diet consists mainly of fish. It does, however, also eat crabs, shrimp, and eels. Snakes have also been known to appear on this bird’s menu.

The only bird of prey on our list, the Crested Caracara, is native to Central America, although a few have been reported in North America.

This large bird has a black cap, yellow-orange legs and face, and a white neck. It also has a black crest on the top of its head.

This bird both scavenges and hunts for food. If there is some carrion nearby, it’ll use its razor-sharp talons and beak to tear lumps of flesh from it and swallow it down.

When hunting, it will fly low and swoop down on small mammals such as mice and squirrels, as well as frogs, lizards, and large insects.

The Crested Caracara lives in open areas and has been known to gather its own materials for nest building instead of occupying older nests like many other birds of prey.

Sadly, in the State of Florida, the Crested Caracara is on the endangered wild bird’s list due to extensive habitat loss.

Common across all of North America, Eastern Canada, and Southern Mexico, the Northern Cardinal is a brightly colored bird that is covered in orange-red feathers.

It also has a pointed crest, which gives them an almost angry-looking appearance, and the male’s crest is much more pronounced than the female’s.

This colorful bird feeds on insects during the summer but will happily visit bird tables and peck away at nuts, seeds, and berries.

This is particularly true during the winter months when insects are harder to find.

There you have it – 13 birds with crests that you can find throughout North America.

Many of these you’ll be able to draw into your garden with the right food. To see others, like the Double-Crested Cormorant, you’ll need to plan a trip a little further afield.

Either way, these beautiful birds are definitely worth keeping an eye out for!