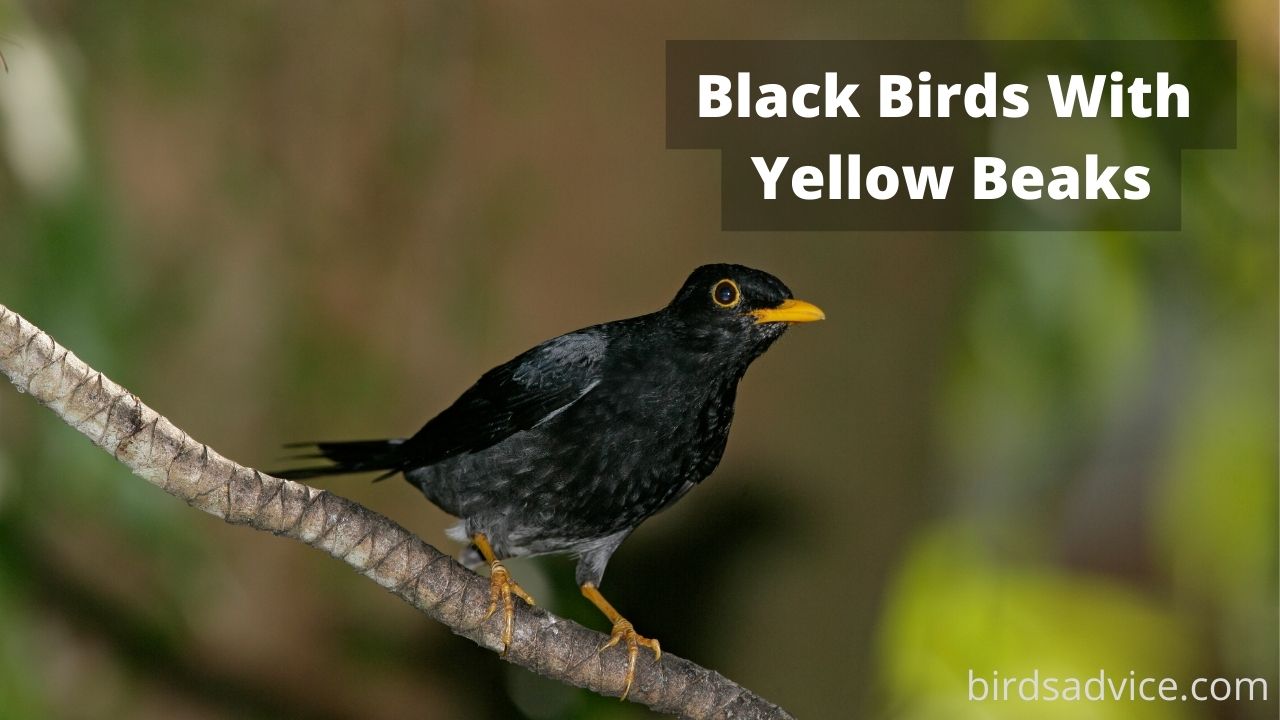 Whether backyard or tropical, birds are one of the most colorful animals on the planet.

But, there are some that fly under the radar and get by without flashy colors and, instead, sport black plumage with just one highlight of yellow on their beak instead.

There are also more of these than you might think!

Below, we’ll take a look at 9 black birds with yellow beaks. From the famous blackbird to the lesser-known yellow-legged thrush – they’re all here for you to learn more about!

First, we have the famous common blackbird (otherwise known as the Eurasian Blackbird).

A member of the Thrush family, the males of this species, are completely black with a bright yellow bill and a yellow ring in their eye. The females, on the other hand, are brown in color.

Common Blackbirds measure around 12-14 inches in length and weigh an average of 4 ounces when fully grown.

They can be found all over Europe (with Iceland and Norway being the only exceptions), North Africa, and Western Asia.

They aren’t particularly fussy about habitat either and will happily live in gardens, wetlands, inland woods, and riverbanks. Their only requirement is that there are nearby trees for nesting.

You’d be forgiven for mistaking the Black Thrust for the Common Blackbird, as they are almost identical in appearance. However, they live in very different places, and the Black Thrust is most commonly found in Mexico and Central America.

Just like the Common Blackbird, it’s the males that sport black feathers and a yellow beak – the females have brown plumage.

In terms of habitat, you’re most likely to spot a Black Thrush in lowland forests,  but they have been known to visit gardens to forage on the ground for insects and small invertebrates.

As well as this, their diet consists of fruits, worms, amphibians, small lizards, and even snakes!

The Common Myna has a black hood and a bright yellow beak. It also has a matching yellow mark around the eye. The rest of its body is brown, but they also have black wing tips.

It can be found all over the world but is most common in South Asia and Australia, having been introduced by humans.

Spotting a Common Myna isn’t too difficult. Not only are they fairly unique in appearance, but they nest in human-populated areas with a particular fondness for rooftops and building eaves.

These birds are omnivorous, and their diet consists of fruits, insects, and invertebrates.

A member of the crow family, the Yellow-Billed Chough is another bird that looks remarkably like the Common Blackbird. It doesn’t, however, have its trademark yellow-ringed eye.

It also lives quite far away from its doppelganger and can be found in South Africa, New Zealand, Australia, and Southern Europe.

Grasslands and dry scrubland along coastlines are their preferred environment, and if you can’t spot one, you’ll definitely be able to hear one thanks to its famously shrill call that has a “keeow” sound to it.

One of the things that the European Starling is most famous for is its aerial display which, when gathered in a group of several hundred, forms something known as a “murmuration.”

These can often be seen over water around sunset.

But what does the European Starling look like? They have black iridescent plumage and bright yellow bill. They also have white flecks across their chests, back of their wings, and on their cap.

Although native to Europe, the European Starling has been introduced to many other parts of the world, including Manhattan, and it was first recorded there in the 1890s.

Often found foraging around for food, they eat fruit, seeds, invertebrates, and insects and have also been known to chow down on small mice and other bird eggs.

With a jet black upper body, bright orange underbelly, and yellow bill, the African Thrush really is one of the most beautiful birds you’ll ever see.

As its name suggests, the African Thrush is native to the Western part of Sub-Saharan Africa, where it has the opportunity to take cover in the trees.

Non-migratory, they feed on seeds, fruits, and insects. And while their black plumage can make them a little difficult to spot, their call is unmistakable and consists of a clear warbling made up of several phrases repeated in a random sequence.

One of the most majestic (not to mention deadliest) creatures on the planet, the Bald Eagle has a black body, white head, and bright yellow beak.

It also has bright yellow feet with black, razor-sharp talons on the end of each toe.

This isn’t your average garden bird, either! The Bald Eagle measures a huge 70-102 cm in length and tops the scales at 6.3kg.

A fearsome hunter native to North America, Bald Eagles nest in the old-growth of trees near large bodies of water where they can swoop down and snatch a salmon with ease.

Arguably the most popular of all tropical birds, the Toco Toucan has a jet black body, white neck, and an ombre-yellow bill.

Their large bill also makes up about half of their body size, which is around 63cm.

Native to the tropical forests of South America, Toco Toucans are the largest of all Toucan species.

They have an omnivorous diet and feed on fruits, seeds, nuts, lizards, snakes, and small mammals.

Found in Northern and Eastern South America, the Yellow-Legged Thrush is a medium-sized songbird with black plumage, a yellow beak, yellow legs, and yellow-ringed eyes.

You’ll most likely spot them in an open forest or woodland area as they hop around hunting for insects.

However, when it comes to breeding season, they completely switch habitats and move to wet lowland forests in Southern Brazil.

Unfortunately, the Yellow-Legged Thrush is still hunted by indigenous people for meat, but it isn’t facing endangerment.

There you have it – 9 black birds with yellow beaks. Some of these you’ll spot quite easily in your backyard, while you’ll have to trek to find others. Either way, we’re sure you’ll have come across a bird here that you’ve never heard of before.