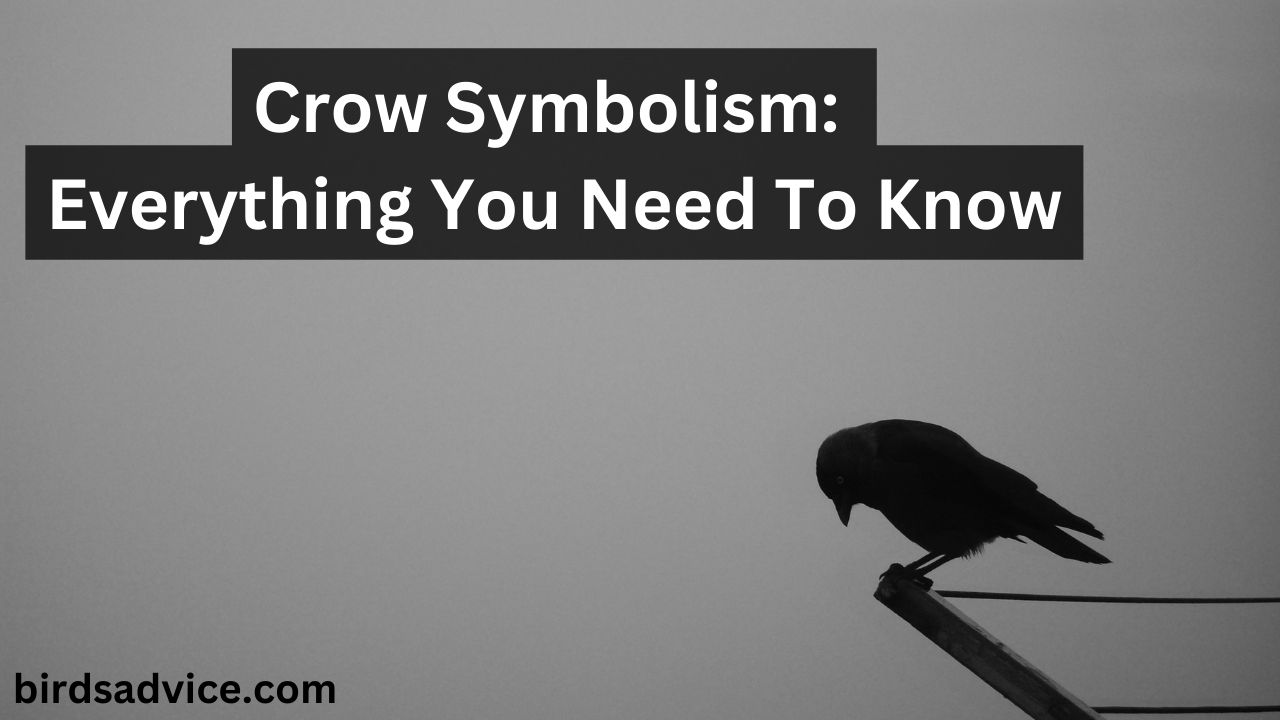 Crows have long been associated with death, darkness, and tales of woe. But, are they really that bad?

And can anything positive be taken from seeing or dreaming of a Crow? If you’ve ever found yourself thinking this, you’ve come to the right place!

Here, we’re going to explore everything you need to know about Crow symbolism.

What Does It Mean If You See A Crow?

First things first, let’s take a look at what it could mean if a Crow has crossed your path recently.

Well, seeing a crow can have different meanings depending on the context and the culture you are in.

In some Native American cultures, crows are seen as bringers of change and are associated with the spirit world.

In other cultures, seeing a crow may be seen as a sign of good news or a message from the universe.

Ultimately, the meaning of seeing a crow can be personal and can vary depending on your own beliefs and experiences.

In many cultures, crows are seen as symbols of transformation and change and are often associated with the deity of the sun.

In some cultures, crows and ravens are revered as powerful spiritual guides and are believed to possess the ability to communicate with the spirit world.

In Greek mythology, the crow is associated with Apollo, the god of prophecy and divination.

The crow was believed to be a messenger of the gods and was often depicted carrying messages between the mortal and spiritual realms.

In Native American mythology, crows are often seen as tricksters and are revered for their intelligence and resourcefulness.

They are also associated with the spirit of the west, which is the direction of the setting sun and the place of the dead.

In many cultures, the crow is also seen as a symbol of death and is often associated with the aftermath of battle or with cemeteries.

However, in some traditions, the crow is also seen as a symbol of rebirth and renewal, as it is thought to be able to regenerate its feathers and renew its youth.

Overall, the crow is a powerful and mysterious symbol that has been revered and feared throughout history.

Its symbolism varies widely across different cultures and traditions, but it is often associated with magic, prophecy, intelligence, and transformation.

In Celtic folklore, crows are often depicted as symbols of death and war.

They are often associated with the battle goddesses and were believed to be present on the battlefield, feeding on the bodies of the fallen.

In Irish mythology, the crow is often associated with the Morrígan, the goddess of death, war, and fertility.

The Morrígan was often depicted as a crow, and was believed to be able to shapeshift into these forms in order to influence the outcome of battles.

In Welsh mythology, the crow is associated with the god Bran the Blessed, who was also known as the “Raven King.”

Bran was a powerful and wise figure who was said to have the ability to see into the future and to possess great strength and courage.

He was often depicted as a giant with a crow’s head.

As you can see, Crows have a significant presence in Celtic folklore and mythology, where they are often associated with death, war, and prophecy.

They are revered as powerful and intelligent creatures, and their presence is often seen as a sign of important events or changes to come.

Crows have a long history of symbolism in Christianity. In the Old Testament, crows and ravens are often mentioned as scavengers and are associated with destruction and death.

In the New Testament, however, crows are mentioned more positively as symbols of God’s care and provision.

One of the most famous stories involving crows in the Bible is the story of Elijah being fed by crows during a time of drought and famine.

God commanded crows to bring Elijah food to sustain him in the wilderness.

This story is often interpreted as a symbol of God’s faithfulness and provision for his people, even in times of difficulty.

Crows are also associated with the concept of divine revelation in the Bible. In some stories, they are depicted as bringing messages or warnings from God to his people.

Overall, the symbolism of crows in Christianity is complex and multifaceted.

While they may be associated with death and destruction in some contexts, they are also seen as symbols of God’s care and provision, as well as divine revelation.

Crows are often associated with Halloween and the supernatural due to their dark coloring and reputation for intelligence.

In many cultures, crows and ravens are seen as mysterious and associated with magic and the occult.

They are often depicted as birds of ill omen, bringing messages of death and destruction.

In popular culture, crows and ravens are often featured in Halloween decorations, costumes, and imagery.

They may be depicted as menacing and spooky, or as symbols of mystery and the unknown.

Despite their negative connotations in some contexts, crows and ravens are also seen as symbols of intelligence, adaptability, and creativity.

Some people may view them as symbols of the Halloween season because of their reputation for being wise and resourceful, as well as their connection to the supernatural.

What Does It Mean If You Dream Of Crows?

As with any dream or nightmare, the interpretation of a dream about crows can vary depending on the context and the actions of the crows in the dream itself.

However, there are a few possible interpretations of a dream involving crows.

For example, seeing a single crow in a dream may symbolize a message or a warning.

The crow may be trying to communicate something to you or alert you to a potential problem.

Seeing a group of crows in a dream may symbolize a sense of community or togetherness.

The crows may be working together towards a common goal or supporting each other.

If the crows in your dream are attacking or behaving aggressively, it could symbolize feelings of anger or aggression in your waking life.

Alternatively, the crows may represent people or situations that are causing you stress or conflict.

Finally, if the crows in your dream are behaving peacefully or are helping you in some way, it could symbolize a sense of guidance or support.

The crows may be trying to offer you guidance or assistance in your waking life.

Crows have a long history of being associated with omens and portents of things to come.

In many cultures, seeing a crow or a raven was believed to be a sign of impending change or an indication that something significant was about to happen.

There are many different interpretations of what a crow or raven omen might mean, and these interpretations can vary depending on the culture and the specific circumstances of the sighting.

One common interpretation of a Crow as an omen is a sign of good luck or positive change, especially if it is a single Crow.

Likewise, seeing two Crows is often thought to be a sign of good fortune or a happy event.

It’s important to note that these are just a few of the many possible interpretations of crow omens, and the meaning of a crow sighting can vary widely depending on the context and the specific circumstances.

Many people do not believe in the idea of crows as omens at all, and view them simply as interesting and intelligent birds.

Crows are known for their intelligence and adaptability, and they are often associated with change and transformation.

If the crow is your spirit animal, you may be going through a major life change or transformation, or you may be considering making some changes in your life.

The crow can also represent your ability to see the bigger picture, to think outside the box, and to use your intelligence to solve problems.

When the crow appears to you, it may be a sign that you need to pay attention to your inner wisdom and trust your own intuition.

Whether you’re thinking about getting a Crow tattoo or you know somebody who already has one, the meaning of a crow tattoo can vary depending on the individual and the context in which the tattoo is placed.

However, some common meanings associated with crow tattoos include:

As mentioned previously, crows are often associated with transformation and change. A crow tattoo may symbolize your own personal growth or a significant change you have undergone or are about to undergo.

Crows are known for their intelligence and problem-solving abilities, so a crow tattoo may represent your own intelligence and wit, or it may serve as a reminder to use these qualities in your life.

Crows have long been associated with magic and the mystical, so a crow tattoo may symbolize your own connection to the spiritual or magical world.

Death & Rebirth: In some cultures, crows are seen as symbols of death and rebirth.

A crow tattoo may represent your own journey through death and rebirth, or it may be a reminder to embrace change and move on from the past.

Crows are known for their adaptability and resilience, so a crow tattoo may symbolize your own ability to adapt and bounce back from difficult situations.

As you can see, the symbolism behind Crows isn’t always as bleak as you might think. Power, intelligence, intuition, and rebirth are all powers that the Crow symbolizes.

There are, of course, some darker aspects to Crow symbolism as well but, as with all interpretations, everything the Crow represents is very much based around each individual.

Regardless of your interpretations though, one thing is for certain – seeing or dreaming of a Crow is definitely not something that should be taken lightly.