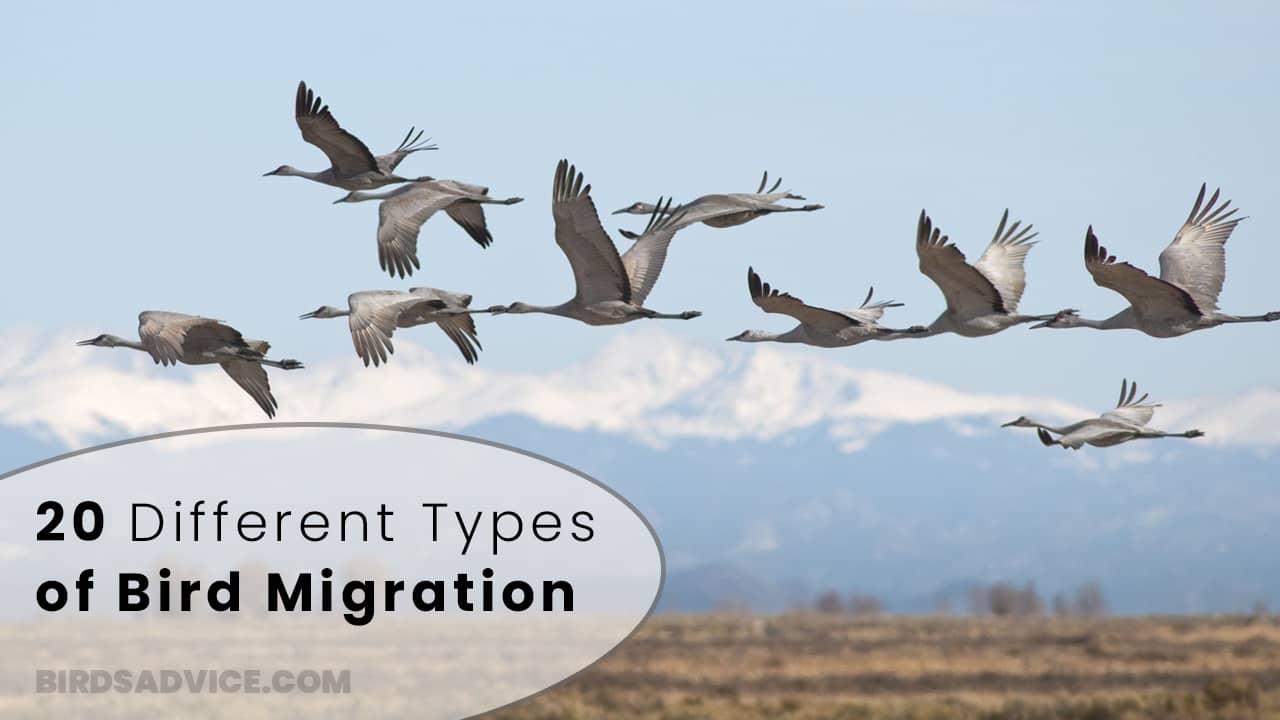 Have you ever seen birds migrate? Whenever the season changes, many birds fly south to warmer climates to overwinter. This is called migration. Every year, millions of birds migrate to escape the cold. In spring, they migrate to their breeding grounds.

Now, the question is how many types of bird migrations are there. Birds can migrate differently. But, the most common ways are latitudinal, longitudinal, altitudinal, partial, vagrant, daily, seasonal, diurnal, nocturnal, nomadic, irruptive, reverse, molt, drift, and more.

In this article, we’re going to talk about some of the ways of migration in birds. Once you finish reading this article, we suggest taking a look at another article on why some birds migrate while others don’t.

Related Blog: How Do Birds Know When And Where To Migrate?

Almost all birds migrate, at least once in their lifetime. Some of them follow more than one migration process, while others change their migration with time. Let’s see the different types of migrations in birds.

The latitudinal migration means moving from north to south or south to north, for example, from the Arctic to the tropics and vice versa. Birds that live in the northern temperate migrate to the south for food and shelter. Some birds of the south migrate to the north for breeding.

Most North American birds follow this migration process. However, some of the most common ones are American golden-plovers, Arctic terns, puffins, Canada geese, bald eagles, and many more. Flightless birds, like penguins, also migrate this way by swimming.

The longitudinal migration is the movement from east to west and west to east, for example, from Atlantic coasts to the Rocky Mountains. This mostly occurs in European birds because geographic features of Europe encourage the birds to move longitudinally.

California gulls, for example, usually breed in Utah. But, they migrate westward to the Pacific coast to overwinter. Besides, European starlings that usually live in west Asia and east Europe migrate towards the Atlantic coast in winter.

The altitudinal migration, also called the vertical migration, means the movement from tall mountains to lower elevations. Birds that breed in high mountains in the summer migrate to low valleys in the winter. They don’t travel long distances. Only a few hundred meters can make a great difference in temperatures and food sources.

Willow ptarmigans of Siberia, violet-green swallows of Great Britain, and grebes of the Andes in Argentina are examples of altitudinal migrants. Eurasian woodcock and bush chats also migrate from higher to lower elevations.

Partial migration means all the members of a bird species don’t migrate. Some of them migrate while others don’t. Typically, birds of a particular species that live in northern regions migrate to the south. But, the others that already stay in warmer regions stay put all year.

For example, blue jays of Canada and the northern United States migrate southward to meet with the sedentary populations of the southern United States. Besides, other partial migrants are spoonbills, coots, bluebirds, titmice, finches, etc.

The vagrant migration, also known as the irregular or erratic migration, means moving aimlessly to disperse in all directions to look for food sources and safety from predators. After breeding, the adults and the juveniles disperse in multiple directions for a few hundred miles.

Daily migration refers to traveling for food during the daytime and return home in the evening. Apart from finding food, some birds move from their nests daily by the influence of some factors like humidity, light, temperature, and predator attacks.

Almost all birds are daily migrants, looking for various food sources. However, American crows, European starlings, and great blue herons are real examples of daily migrants. Besides, cardinals, chickadees, titmice, nuthatches, and sparrows are on the list.

Seasonal migration means the migration due to seasonal changes. There are 2 types of seasonal migrations: one from north to south in the fall for looking for warmer regions and the other from south to north in spring for breeding.

Diurnal migration means migrating in the daytime. The most common birds that migrate during the day are crows, swallows, blackbirds, robins, bluebirds, blue jays, loons, pelicans, cranes, geese, swans, ducks, and other shorebirds.

While migrating some distances, these birds stop somewhere to forage. Some of them, particularly ducks, swans, and geese travel in flocks in a well-organized way. Swifts and swallows capture their treats in the air while traveling.

As the name suggests, nocturnal migration means migrating during the night. Many birds are nocturnal migrants, including sparrows, thrushes, warblers, etc. The darkness of the night protects them from predators.

These small songbirds take rests during the day. They eat their foods, like seeds, nuts, and grains during the daytime so that they can travel long distances at nighttime. After sunset, they start traveling again to their destination.

When birds migrate to follow the food sources only, it’s called the nomadic migration. This migration is less predictable. Nomadic birds usually stay within their range and look for food and water sources as near as possible. If not found, they go farther.

These birds return their home when prey is more abundant, or ripen crops are available, especially after rainfall. There are many nomadic migrants out there, such as waxwings, zebra finches, phainopeplas, black swans, blue jays, robins, and more.

The irruptive migration means unpredictable migration by a large number of birds into unusual areas, especially when food sources are scarce in their own territory. Similar to nomadic migration, this is highly unpredictable.

However, irruptive birds might be available far outside their habitats during the colder months. The birds that follow irruptive migration are snowy owls, crossbills, evening grosbeaks, pine siskins, varied thrushes, redpolls, and many more.

Typically, young geese, swans, and the juvenile of other birds mistakenly do reverse migration. These birds don’t usually migrate to the opposite direction in flocks. In summary, this is a mistake done by young birds in the fall.

This is the migration for accommodating the annual molting period. During this period, some birds leave their territory to stay at a safe location. At this time, they’re less capable of flight and can be vulnerable to predator attacks.

Once the molting process completes, they return to their own territory. This type of migration is often seen among a wide variety of swans, ducks, and geese. Some of them are mallards, northern pintails, wood ducks, American wigeons, etc.

You’ll be surprised to know that some birds are out there that use more than one type of migration whether deliberately or accidentally. The drift migration is something like that. It means losing the migration route by bad weather and high wind conditions.

This is why many rare birds can sometimes be seen. Typically, the drift migration happens when inexperienced young birds, which are less capable of flying, head south in the fall. However, adult birds can also be drifted away by storms.

As the name suggests, long-distance migration means moving long distances. Arctic terns, for example, migrate from pole to pole. They breed in the northern hemisphere in summer but migrate to the southern hemisphere in the fall to overwinter.

As the name suggests, short-distance migration means migrating short distances. The birds that migrate short distances travel a few hundred miles. They can just move from high to low elevations, moving up or down a mountainside.

The loop migration means migrating through one route to breeding grounds but return another route to non-breeding or overwintering grounds. Many seabirds and shorebirds follow an annual circle, using seasonal variations in wind patterns.

Another loop migrant is rufous hummingbirds. These birds follow a coastal route from Mexico to Alaska in spring. In fall, they migrate to their nonbreeding grounds through a different route with taking advantage of mountain wildflowers.

The dispersal migration is a forced migration by parents to their juveniles from their hatching grounds in order to find a new territory. This is not considered a true migration. Birds have to do this migration only once in their lifetime.

Parent birds force their young to migrate because the adults continue to use the same range for the next broods. This type of migration is pretty common in year-round residents, like a wide variety of woodpeckers, which always try to defend their territory.

Leapfrog migration, also known as skip migration, is a unique type of migration. It means a northern population migrates long distances to pass over a sedentary population of the same species but both populations don’t extensively mix one another.

The most common leapfrog migrants are some shorebirds, such as curlews, godwits, turnstones, sandpipers, sanderlings, ruffs, phalaropes, etc. Their northern hemisphere populations don’t mix the year-round residents in the south in winter.

The cyclic migration is seasonal but doesn’t occur at regular intervals. The birds that migrate cyclically travel to temperate regions once in 3 to 5 years. Snowy owls and albatrosses in the United States are the real examples of this migration process.

Ornithologists found that birds migrate to survive. They also migrate to take advantage of various food and water sources. If climates remained unchanged and food sources were always available, birds would never need to migrate.

Anyway, we hope you have learned a lot about the different types of bird migrations. If you’re still thinking we have missed something really important in this article, comment down below. Share your experiences with migratory birds in winter.