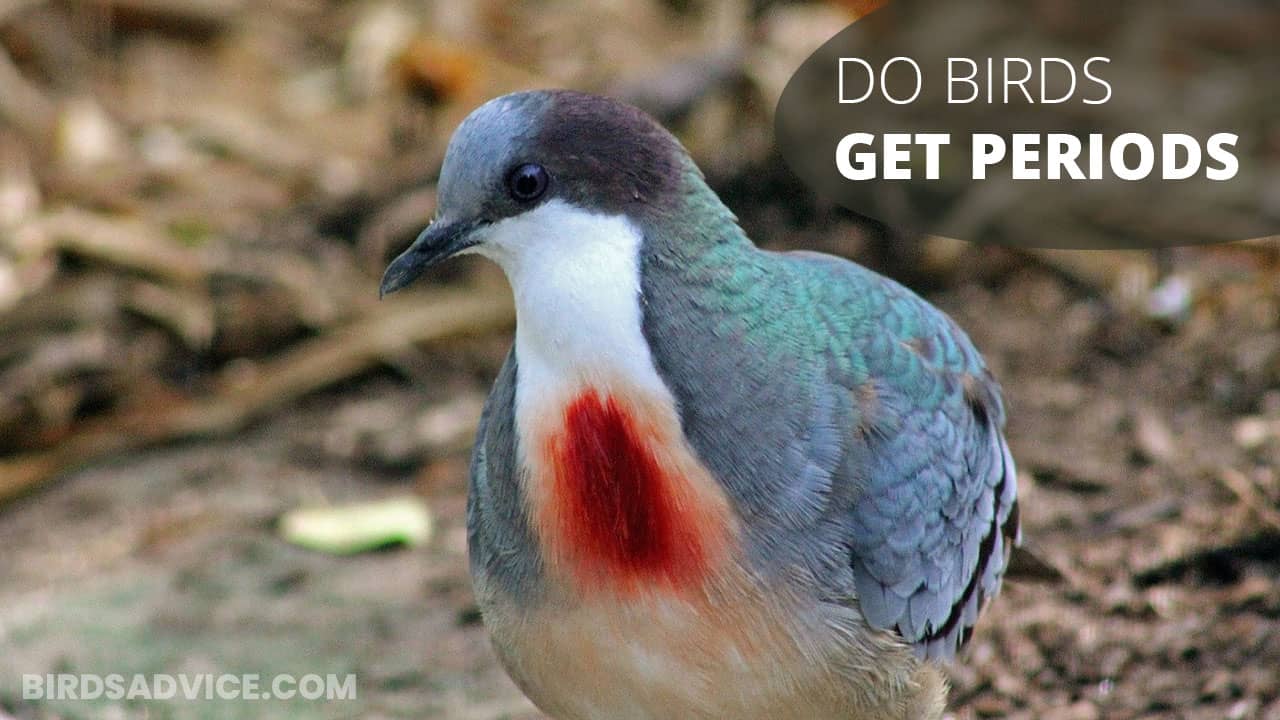 The period process is nature’s own way to let the female know about their body that they are healthy and able to nurture offspring. Being a marvelous pet owner, you may know or have noticed that dogs, cats, rabbits, and other mammals get period. But have you ever wondered about birds?

Contents show
1 Do Birds Bleed During Periods?
2 Do Parrots Experience Bleeding During Period?
3 Do Hens Have Periods?
4 Are Eggs Hens’ Period?
5 How Do Birds Develop and Lay Eggs?
6 Wrapping Up

Do birds get periods? The answer is no; they don’t experience actual periods like mammals and humans. Besides, they don’t contain any uterus, which can help them create a menstrual cycle. But there are some exceptions, such as parrots and hens, and you can’t count anything based on that.

In bird species, parrots get periods, and it is still a mystery if we talk about hens. You know nature herself is a mystery. In this article, we’re going to cover all the mysterious acts, including birds’ periods, reproductive system, and so on.

Do Birds Bleed During Periods?

As periods don’t occur in birds, there is no chance of bleeding. However, it only happens in some mammals and dogs; usually, it occurs twice a year.

While it appears, the uterus’s inner layer comes out during that time and gets reabsorbed by their body, called covert menstruation. Now let’s talk about the aforementioned exceptions.

Do Parrots Experience Bleeding During Period?

No, parrots don’t bleed during periods, but some pet owners have a misconception about parrots’ periods. They believe that parrots do bleed while going through the menstrual cycle, as some owners have witnessed blood in parrots’ feathers, especially during this time.

Well, we are breaking this fact down here. Parrots tend to shed their feathers after hitting puberty. Their new plumage has blood vessels. So, when feathers break down, parrots bleed, and coincidently, this bleeding incident occurs in menstruation, which creates a baffling mystery to many pet owners.

Apart from this, another controversy is associated with the hens’ period and eggs in the pet owner community. Below, we will talk about these factors.

Do Hens Have Periods?

Before getting into the answer, first, let’s talk about what actually is period. Menstruation is all about releasing endometrial blood and tissues from the uterus. And we know that birds don’t have such a kind of function; instead of that, they come with ovaries.

That means, logically, birds shouldn’t have any periods or bleeding. But talking about hens’ periods, mystery strikes again here too. Some researchers believe they don’t get periods, while others have tried to show that they have periods via biological shreds.

Besides, some people even think that chicken eggs are a result of menstrual blood. Sadly, researchers haven’t yet solved the mystery regarding chickens’ periods and their eggs. But we can take you deep inside how their eggs form and how they lay eggs so that you can get a better understanding of these mentioned phenomena.

According to some biologists, the answer is no. Because hens and other birds ovulate follicles, which don’t lead them to menstruate like other species; instead, their ovulated follicles travel through their bodies and come out as fertilized or unfertilized eggs.

Considering this fact, we can say that eggs aren’t chickens or other birds’ period.

How Do Birds Develop and Lay Eggs?

The forming of birds’ eggs is a mesmerizing process, which begins as a cell. Then, lots of hormonal changes initiate the development process. Here’s how it happens:

Birds can develop both fertilized and unfertilized eggs. And to start the process, first, a single cell expands in size. After a while, this cell grows into an oocyte, known as yolk. Next, it travels into the oviduct, where fertilization takes place with the sperm’s help. If there is no sperm present, birds will still lay unfertilized eggs.

Anyway, the development process continues, and at some point, membranes, and albumens, in essence, egg-white, are added to the yolk. Then, the mass gets hydrated and forms into an oval shape.

Finally, it passes down to the shell gland, where the robust shell, featuring calcium and minerals, is added. That’s how an entire egg gets into form. During this egg formation, birds’ reproductive system, including two ovaries, urogenital tract, gastrointestinal tracts, and cloaca, plays a significant role.

How do birds lay eggs? After forming the hard shell, eggs leave birds’ reproductive tracts and enter their cloacas. Lastly, birds pass eggs through cloacas and vent openings outside of their body. And the same organs they use for stool and urine.

Here is a quick recap of the entire article. As you may know, every bird’s reproductive system and breeding period are distinctly different. Aside from that, neither birds boast uterus nor experience any menstrual cycle, resulting in no period.

The only exception is found in parrots, and speaking of the chickens, whether they have menstruation or not is still a mystery yet to be determined. So that’s all about today’s topic; we hope you enjoyed reading it. Share this article and follow us on Facebook, Twitter, Pinterest.