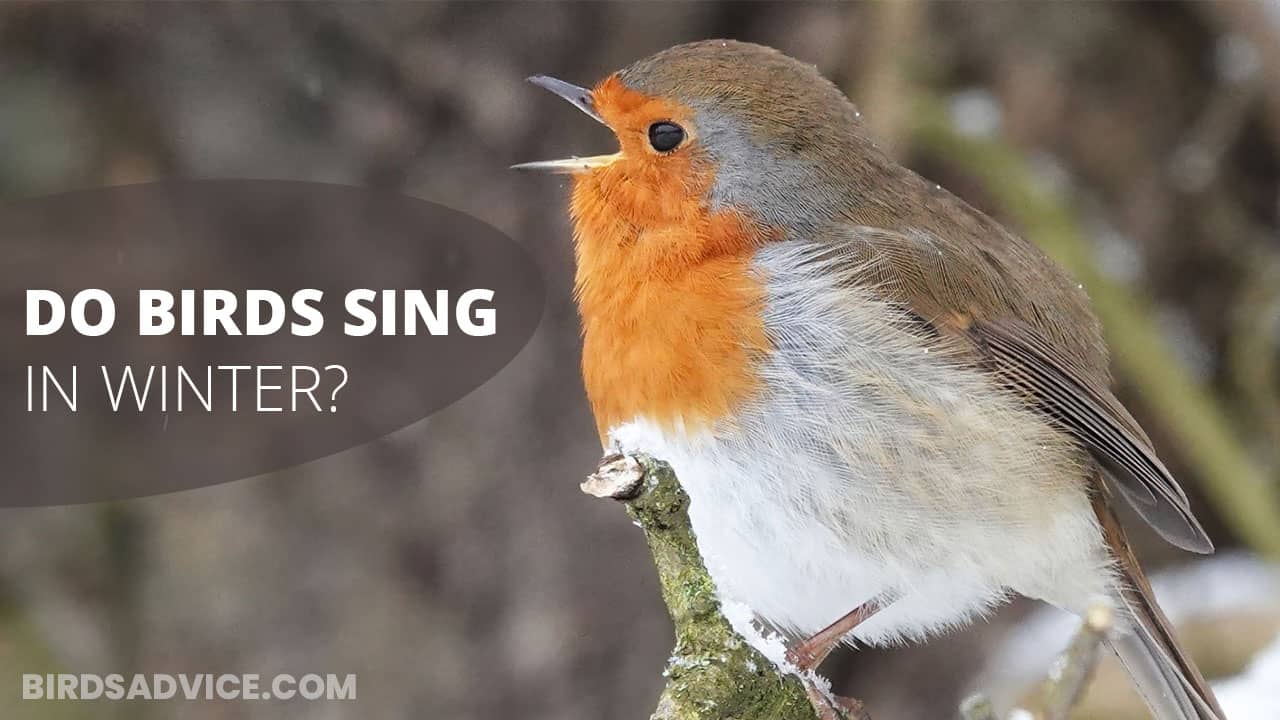 Almost all birds make a variety of sounds to communicate with others. There are two types of sounds: long, complex songs and short, simple calls. Most people associate birds’ songs with spring and summer. But, you may also hear them singing in other seasons.

Now, the question is, do birds sing in winter? The short answer is yes. Some birds, such as northern mockingbirds, black-capped chickadees, song sparrows, pacific wrens, fox sparrows, northern cardinals, American robins, and more, sing in winter, particularly in late January and early February (many weeks ahead of the nesting season).

Why Do Some Birds Sing In Winter?

Some birds sing in winter because the male birds break out the melodies to woo the female to establish their territories. Some of them might also alert each other to new food sources. Apart from that, we may not hear birds’ actual songs in winter.

1. Increasing the Amount of Daylight

According to National Geographic, when the day length is increasing in late winter, some birds sing, thinking that spring is coming. The increasing amount of daylight triggers the idea in their brain, and they start singing a variety of songs.

There are some migratory birds that practice their love songs throughout the winter. For example, great warblers overwinter in Africa and return to Europe in spring. During the winter period, the males, repeatedly and slowly, keep practicing their tunes.

Which Birds Sing in Winter?

Northern mockingbirds usually sing from February to August and then September to early November. In the late winter, the males start singing in order to attract females and build spring nests. The females, on the other hand, sing more in the fall to establish a winter territory.

Although black-capped chickadees don’t sing too much, you can hear them singing throughout the fall and winter, particularly as early as mid-January. The males increase the frequency of the songs as winter progresses. The females occasionally sing.

Song sparrows sing in almost all year. Consequently, these birds can be heard singing in winter. Living in the Philadelphia, song sparrows are pretty quiet in winter. If any of them finds a new food source, they might be willing to let the others know.

Pacific wrens sing many complex songs. The males sing for 5 to 10 seconds while the females don’t sing too much. These birds are regular singers from mid-April to August (their breeding season). However, they can be irregular singers in early and late winter.

Both male and female northern cardinals sing a few songs. Their songs usually last 2 to 3 seconds. These lovely songbirds usually sing throughout the breeding season. However, they can be heard singing as early as February.

When American robins reach their breeding territories, they usually sing. However, robins may also sing in winter due to surging hormones. They sing at a steady rhythm, but the syllables may rise and fall. Their songs become more rapid in the evening.

When Do Birds Sing in Winter?

On the other hand, northern mockingbirds sing in February, a few weeks before the nesting season. Apart from that, song sparrows, fox sparrows, pacific wrens, and American robins may sing in the winter, particularly in late January and early February.

Why birds break out into song in winter is not thoroughly understood. The more the research continues, the more things we uncover about our feathered friends. If you’re lucky to hear birds’ songs in winter, enjoy the tunes and note how frequently they sing.

By the way, we hope you have enjoyed and learned a lot about some birds and their surprising songs in winter. If you have ever heard a bird singing in cold climates, let us know your experience below in the comment section.