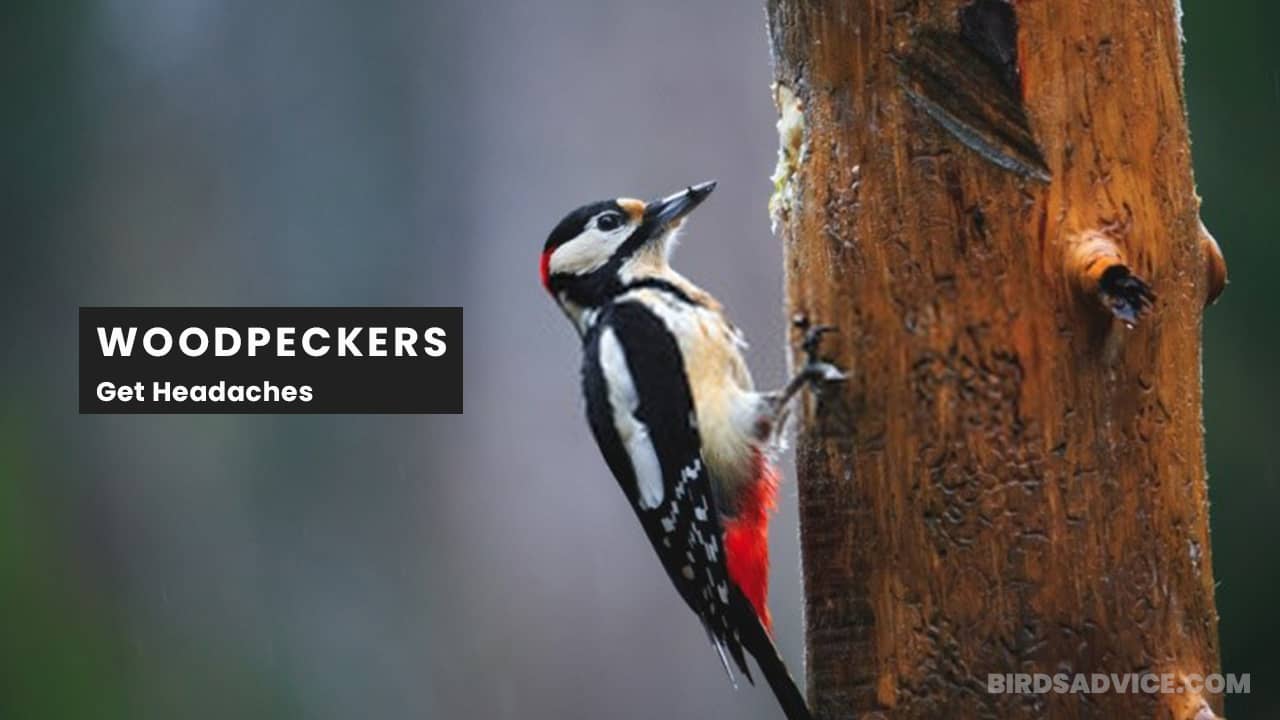 Have you ever heard a woodpecker pecking on trees or any hard surfaces? These fascinating birds peck up to 18 to 22 times per second at a force of 1,200 to 1,400 g’s, and around 12,000 pecks per day! Woodpeckers peck nearly 10 times greater than what would cause headaches in humans.

Now, a question may arise in your mind, do woodpeckers get headaches? No, woodpeckers don’t get headaches at all. They don’t get brain injuries caused by concussions either. The main reason is woodpeckers have a smaller brain, a strong upper bill, and a unique skull to absorb the impact of hammering.

Why Don’t Woodpeckers Get Headaches?

Woodpeckers have a ‘hyoid’ that absorbs some energy from collisions. The hyoid is a bony tongue-supporting structure that acts like a seatbelt around the brain. It ranges from their mouth to their eyes, wrapping around the skull.

Another reason is woodpeckers’ short duration of contact (18 to 22 times a second) puts less impact on their brain, and therefore, they can avoid headaches and concussions. Also, a plate-like spongy bone surrounds woodpeckers’ brains to absorb and lessen the impact.

How Do Woodpeckers Avoid Brain Injury?

According to Professor Lorna Gibson, woodpeckers have specialized bills, especially the thick, strong upper bill, which absorbs the impact of hammering and directs most energy to the rest of their body. This way, woodpeckers avoid brain injury.

Secondly, compared to human brains, woodpeckers’ brains are smaller. So, when these birds headbang against the trees, the impact on their brain is less intense. You may know the sayings, the bigger you are, the harder you fall. That’s how woodpeckers avoid brain injury.

Thirdly, a woodpecker’s skull is quite different than a human skull. While a human brain is separated from the skull with fluid, a woodpecker’s brain fits the skull more snugly, like a helmet. This means woodpeckers’ brain doesn’t move around while striking, and therefore avoid injury.

In fact, woodpeckers’ brain moves to and fro in the skull while hammering the trees. The force of collisions affects a large area of the brain. This causes less damage than if all the force hits at a single spot in the brain. For example, if you lay on a bed of nails, you won’t get hurt. But, if you step on a single nail, you will get a lot of pain.

Do Woodpeckers Never Get Hurt?

Woodpeckers can get hurt if they try to fly headfirst into windows. These birds can be equally vulnerable like other wild birds if get hit due to other motions, except for pecking in a straight line. Any strike at other spots of woodpeckers’ bodies could be intense.

However, scientists are not entirely sure whether woodpeckers suffer any brain damage or not. According to a recent study, human brains contain a protein called tau, which can cause brain damage. This protein can also be found in woodpecker brains.

To sum up, woodpeckers don’t have headaches due to hammering on trees. Their bill structure, skull and brain position, wrap-around tongue, and straight-line hitting can help them avoid headaches, concussions, and brain injuries.