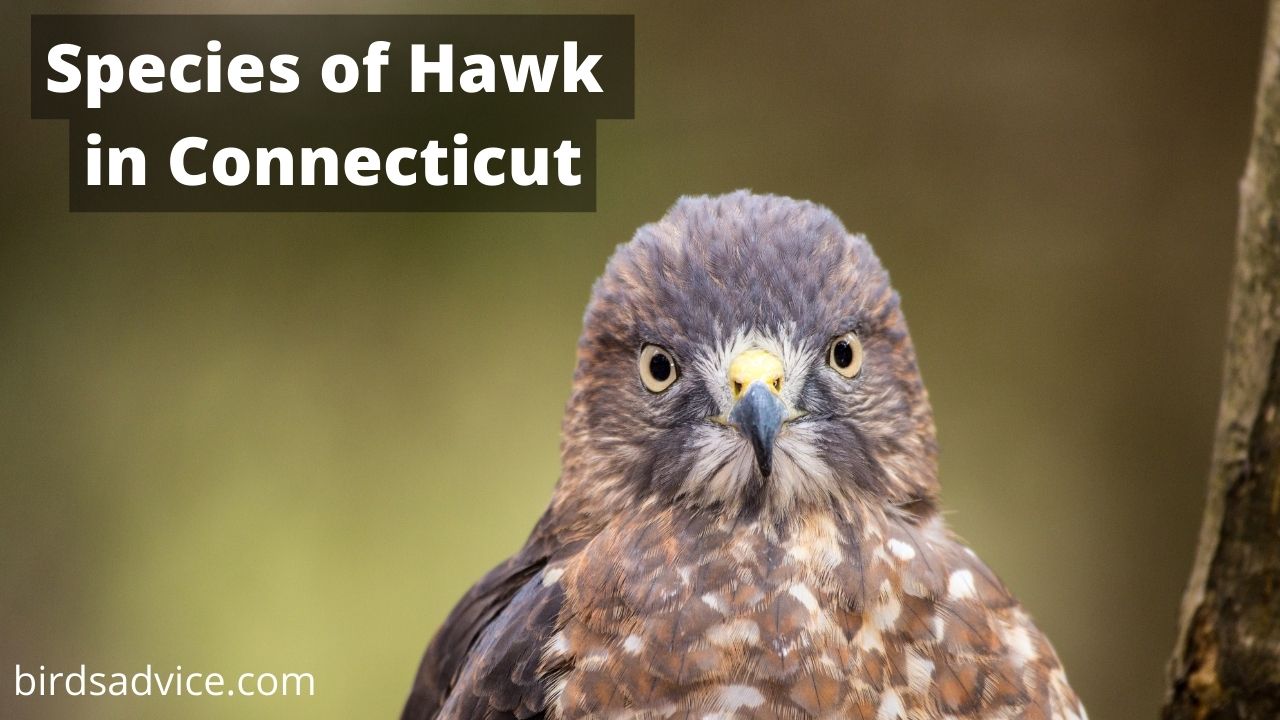 Are you interested in learning what species of Hawks there are in Connecticut?

Well, you’ve come to the right place! Whether you live in the State or you’re simply visiting as part of a wildlife expedition, you’ll find everything you need to know here.

Below, we’ll look at 8 species of Hawk you can spot in Connecticut.

You’ll learn about their identifying features, habitats, feeding habits, and more from the common to the more elusive.

One of Connecticut’s non-migratory birds of prey, the Red-Shouldered Hawk is a common sight all year-round.

As the name suggests, its red-colored shoulders are their biggest distinguishing feature, but they can also be identified by their black and white checkered wings and red stripes on their chests.

They are also relatively large hawks, measuring about 20 inches in length and an average wingspan of 40 inches.

The best place to spot a red-shouldered hawk is in wooded areas near a water source such as a river, stream, or pond. Here they hunt their prey on the wing, which includes snakes, small mammals and frogs.

The red-shouldered hawk also builds its nest in these areas, but instead of building a new one each breeding season, it will reuse the last year’s.

Once any fixing touches have been made, the female will lay up to 5 white-blue eggs and the pair will incubate and raise their brood together before reverting to solitary life for the fall and winter.

Unlike many other hawks on this list, the Rough-Legged Hawk is most commonly seen in Connecticut during winter.

They return to the state in late October and stay until April. They then return to their arctic breeding grounds and won’t return to Connecticut until the following October.

Their name comes from the rough-looking feathers that cover their legs, which help keep them warm and protect them from the cold, ice, and snow of their Arctic breeding grounds.

In terms of size, the Rough-Legged Hawk is longer and narrower than most other hawks, measuring about 20 inches with a 53-inch wingspan.

The Rough-Legged Hawk’s diet consists primarily of lemmings and voles, but they also hunt and eat other small mammals such as ground squirrels and mice.

Their preferred habitat is open fields and swamps, where they often perch on high ground to get a better vantage point.

When they return to their arctic breeding grounds, they build their nest on a cliff edge and the female lays between 3 and 5 light blue eggs.

The Sharp-Shinned Hawk is one of Connecticut’s non-migratory birds of prey. However, despite staying in the State all year-round, it remains quite elusive.

They are most commonly found at the edges of forests. They use their incredible maneuverability and fly at high speeds, allowing them to navigate through dense branches and vegetation to capture smaller songbirds.

The Sharp-Shinned Hawk also has a unique feeding habit. Rather than devouring its prey on the spot, it carries it back to a branch and plucks its feathers from it before using its razor-sharp beak and claws to tear through its flesh.

The Sharp-Shinned Hawk can be identified by its blue-gray back, red-orange breast, and dark-banded tail.

This raptor will also nest in its chosen hunting ground, building large nests high in coniferous trees surrounded by dense vegetation. These trees can be up to 2 feet wide and 6 inches deep.

Once constructed, the female will lay up to 8 light blue speckled eggs and the pair will raise them together. Once the chicks have fledged, the pair will go their separate ways.

Northern Goshawks are one of Connecticut’s rarer Hawk species and only visit the State during the winter.

They soar high above national parks, forests and mountains, and one area where they are seen fairly frequently is in the Chequamegon-Nicolet National Forest.

So if you want to increase your chances of seeing one, be sure to visit.

Be warned; They are very secretive birds and can become aggressive if you get too close to their nest. There have even been reports of them attacking humans.

The Northern Goshawk can be recognized by its gray feathers covering its entire body. It also has short, broad wings, a long tail, and a white stripe running across its yellow eyes.

They measure about 23 inches in length and have an average wingspan of 44 inches.

In their preferred habitat of mixed and coniferous forests, the Northern Goshawk perches high in the trees and uses its incredible vision to spot its prey from afar.

Once found, it swoops down with speed and agility, snatching it up in its claws and taking it back to a branch or nest to devour. Their prey includes small mammals and smaller songbirds

The Red-Tailed hawk is Connecticut’s most common Hawk species.

It is also non-migratory and can be seen year-round, although numbers increase between August and May when Red-Tailed Hawks from other parts of North America flock to Connecticut for the winter.

Their most distinctive feature is their red tail that gives them their name, which is also short and broad.

Both sexes have this, as well as brown upperparts and light yellow underparts. They also have broad, rounded wings with an average wingspan of 50 inches.

You will most likely spot a Red-Tailed Hawk circling over open fields in search of its prey. In fact, most sightings are reported from cars driving past open farmland and countryside.

They can also often be seen perched on telephone poles, giving them a better vantage point for small mammals, reptiles, and birds they may hunt.

However, they do not rest in these areas. Instead, they make their homes in forests and mixed forests.

They also build their nests high up in trees on cliff ledges, although some Red-Tailed Hawks also roost and nest in tall towers and buildings in urban areas.

The Northern Harrier can be seen in Connecticut all year-round, however it is most abundant during the winter .

With an average length of 18 inches and a wingspan of 44 inches, the Northern Harrier is a sleek bird of prey with long, broad wings.

They often position their wings higher than their bodies when they fly, giving them a telltale V-shape, which is one of their easiest identifying traits.

Male Northern Harriers can also be identified by their gray upperparts, white underparts and a white patch on the rump.

Females do not have these markings and are instead completely brown without the white rump patch.

You are most likely to spot a Northern Harrier in its preferred habitat of swamps and grasslands.

Here, they hover low above the ground in search of small mammals to hunt and smaller songbirds. They also nest in these areas, building their nests on the ground in dense vegetation such as willow, reeds, and brushtail.

The Cooper’s Hawk is one of Connecticut’s most common Hawk species.

It’s also non-migratory, and there have been reported sightings of this magnificent bird all year-round.

However, despite their abundance, they can be quite difficult to identify as they look remarkably similar to the Sharp-Shinned Hawk. They share the same blue-gray back, rust-orange chest, and banded tail.

What sets them apart, however, is the size of their head. The Cooper’s Hawk has a much larger head than the Sharp-Shinned Hawk and extends well beyond the wings.

They are also slightly larger in general, measuring an average of 14 inches and have a wingspan of 30 inches.

The Cooper’s Hawk is not a migratory bird, but if temperatures get too chilly as winter approaches, a few may migrate further south to Honduras and Mexico for the winter.

The best place to spot a Cooper’s Hawk is at the edge of a forest. Here they nest in tall trees, often reusing abandoned nests or large clumps of mistletoe.

The female Cooper’s Hawk lays between 2-6 light blue eggs. The couple will raise them together, help them fledge and then go their separate ways.

They also hunt in this habitat, grabbing any small mammals or small songbirds they can find.

Like the Sharp-Shinned Hawk, the Cooper’s Hawk will also hunt from bird feeders when necessary. If you have this problem, remove your feeders for a few weeks to deter them.

Another fairly common sight in Connecticut, the Broad-Winged Hawk is the state’s third most sighted species.

Relatively small, the Broad-Winged Hawk is a stocky bird, measuring up to 17 inches with a wingspan of about 35 inches.

Its reddish-brown head, striped chest, and short, banded tail with a square end can also be recognized.

Sightings are most common from April through October when they are in Wisconsin for the breeding season. In winter they move further south to warmer temperatures.

Hundreds of Broad-Winged Hawks flock together during their winter migration to Central and South America, creating an aerial spectacle known as a “kettle”.

This mass of hawks circling high in the sky is truly one of nature’s most incredible spectacles and something definitely worth keeping an eye out for in late autumn.

Their preferred habitat is mixed forests near a water source. Here they reuse the nest of another animal such as squirrels or crows and in the breeding season the female lays 2-3 white eggs in her nest.

They also hunt in this habitat, hovering along the edges and surface of the water in search of snakes, small mammals, frogs and baby turtles.

Next time you’re walking through a nature reserve, sitting in your local park, or even your own backyard, look up at the sky.

You may spot one of Connecticut’s Hawk species you’ve never seen before!