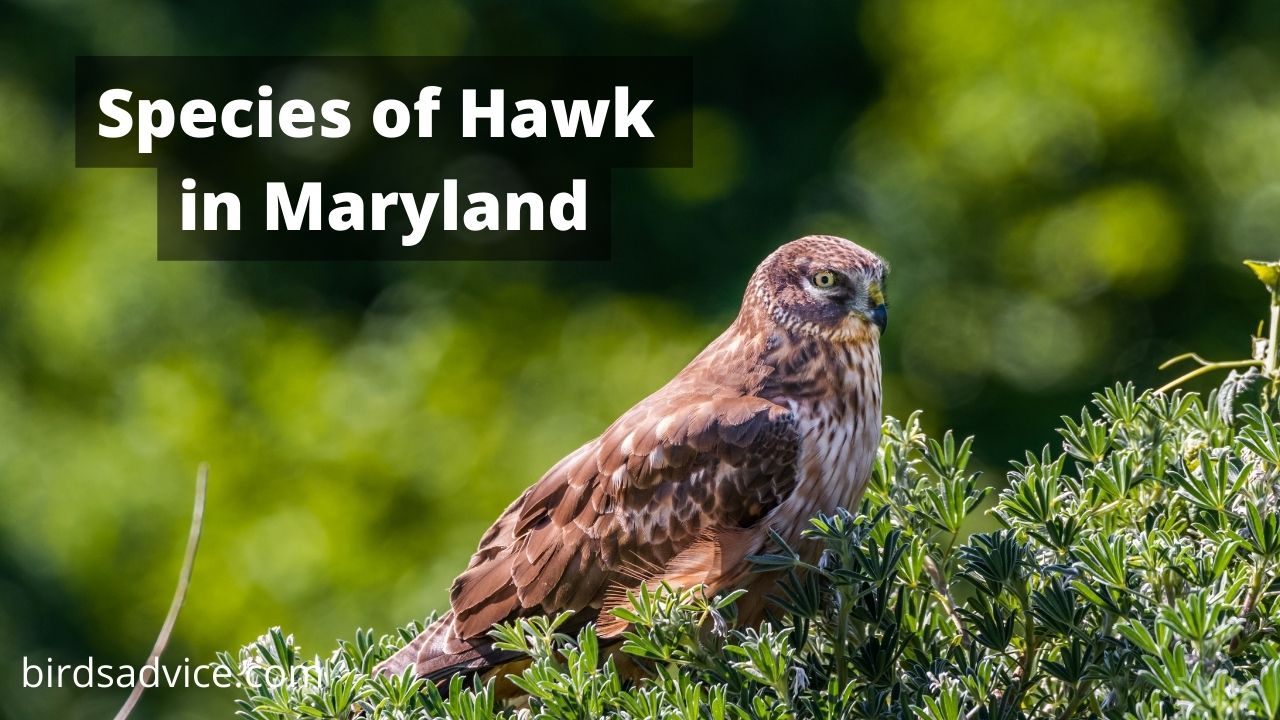 There’s always some incredible wildlife regardless of where you are in North America.

And, of all the wild creatures the continent has to offer, birds of prey are among the most magnificent.

But what birds of prey are there in Maryland? If you’ve been asking yourself this question for a while now, you’ve come to the right place.

Below, we’ll take a closer look at 7 species of hawk you can spot in Maryland.

We’ll look at their identifying features, habitat, the best time of year to see them, feeding habits, and more.

By the time you’re done reading this, you won’t only know how and where to find them – you’ll be a bit of an expert on each species!

Colors differ between sexes, with the male Northern Harrier having gray upperparts, white underparts, and a white patch on the rump.

The female Northern Harrier lacks a white rump and is covered with brown feathers. However, both sexes share the same flight habit, positioning their wings above their bodies to create a V shape.

It is most commonly seen soaring over swamps and meadows, hunting for small birds and mammals near the ground.

The Northern Harrier also builds its nest close to the ground in the safety of dense vegetation such as willows, reeds, and brush tails.

The female Northern Harrier lays between 4-5 white eggs in this nest and incubates them for around 2 weeks.

Once hatched, the mating couple raises their brood together until they are fully fledged. After this, they go their separate ways until the next breeding season.

One of Maryland’s most common raptors, the Red-Tailed Hawk, is soaring high in the sky year-round.

It is also one of the most easily spotted species of Hawks, thanks to its hunting habit of circling over open roadside areas.

It is also often seen perched on telephone poles, scanning the area for prey.

As you might have guessed from its name, the Red-Tailed Hawk has a distinctive red tail that is short and broad.

They can also be recognized by their brown upperparts, pale underparts and broad, rounded-tipped wings.

The Red-Tailed Hawk measures about 20 inches long and has an average wingspan of 48 inches, although females are larger than males.

The Red-Tailed Hawk builds its nest high in the treetops, although it has also been known to nest and roost in tall buildings in urban areas. Their diet consists of reptiles, small mammals and smaller songbirds.

Another of Maryland’s year-round residents, the Red-Shouldered Hawk can be recognized by its dark and white checkered wings, red stripes on its chest and of course the red shoulders that give it its name.

It also measures about 22 inches in length and has an average wingspan of about 39 inches.

If you think you’ve spotted a Red-Shouldered Hawk but are still not 100% sure, put an ear to the sky and listen to its famous call.

This is a series of short bursts resulting in a “cack-cack-cack” sound.

The best place to spot a Red-Shouldered Hawk is at the edge of a forest near a water source such as a river or stream. Here they hunt snakes, frogs and small mammals.

The Red-shouldered Hawk is also a fairly resourceful bird of prey and rather than going to the trouble of building a new nest each breeding season, it will reuse the same one year after year.

The female Red-Shouldered Hawk lays up to 5 light blue eggs in this nest. The mating pair will raise them together until their chicks fledge, at which point they will go their separate ways.

The smallest hawk species in Maryland, the Sharp-Shinned Hawk is one of the most difficult to find.

While they are resident in Maryland all year round, they bear a striking resemblance to the Cooper’s Hawk (which we’ll look at in more detail a little later), which makes telling them apart very difficult.

The Sharp-Shinned Hawk is about 11 inches long with an average wingspan of 19 inches.

Its blue-gray upperparts, reddish-orange chest, and dark-banded tail can be recognized. It also has a fairly long tail, comparable to its size, with a square end and short, rounded wings. The head is also quite small.

Although extremely elusive, the best place to find a Sharp-Shinned Hawk is along the edges of forests.

They set up their home high up in coniferous forests, building huge nests that can be up to 2 feet wide and 6 inches deep.

The Sharp-Shinned Hawk also hunts in this habitat, using its incredible speed and agility to maneuver through dense vegetation and branches and catch smaller songbirds in mid-flight.

They have also been known to feed on songbirds and may visit bird feeders when food is scarce in their preferred habitat.

Another species of Hawk you will find in Maryland is the Rough-Legged Hawk. A winter visitor to the state, this bird of prey heads further South, having spent its breeding season in the Arctic.

Most are sighted North of the State, but even those that set up home for the winter here are considered a rare sight.

Despite its name, the Rough-Legged Hawk doesn’t actually have rough legs. Instead, it’s their leg feathers that give them that rugged look.

These play an important role in keeping them warm in the cooler, arctic temperatures during the breeding season. The Rough-Legged Hawk also occurs in two variations; light and morph.

Their preferred habitat is swamps and open fields, where they hunt for small mammals such as mice, voles, and ground squirrels.

They also nest and roost on high cliff edges, but are usually spotted perched on poles, scanning the area for prey.

During the breeding season, the female Rough-Legged Hawk lays up to 5 light blue eggs and incubates them herself for about two weeks.

After hatching, the mating pair feed and raise their young together until they fledge. After this, they return to solitary life until the next breeding season.

The Broad-Winged Hawk is a migratory bird of prey that spends the spring and summer in Maryland before migrating South to South America for the winter.

They’re also more common in the state’s south, and the best time of year to spot them is early fall.

Hundreds of Broad-Winged Hawks gather before beginning their long migratory journey to perform an aerial show known as a “Kettle.”

The Broad-Winged Hawk is a stocky bird of prey at about 15 inches in length and an average wingspan of 35 inches.

It can be recognized by its reddish-brown head, striped chest, and banded tail, which is short and square. It also has relatively broad wings, the character it takes its name from.

Their preferred habitat is mixed forests near a water source. Here they hunt snakes, young turtles, frogs, and small mammals.

They also nest in these areas and, rather than building their own, reuse the nest of another animal such as a squirrel or crow.

Once the perfect repurposed nest has been found, the female Broad-Winged Hawk lays up to 3 eggs and incubates them for about two weeks.

After hatching, the pair raise their young together before helping them to fledge and go their separate ways.

As we mentioned earlier, Cooper’s Hawk is similar to the Sharp-Shinned Hawk.

Both species have a blue-gray back, red-striped chest, and black-banded tails. The only real way to tell them apart is size.

The Cooper’s Hawk is larger, measuring about 15 inches in length and with an average wingspan of 35 inches. They also have a much larger head, extending further beyond the wings than the Sharp-Legged Hawk.

The Cooper’s Hawk is known for its habit of snatching smaller birds from feeding sites, particularly when food is becoming scarce in their natural habitat.

If you’ve had a problem with this recently, don’t worry – there’s an easy fix. Just remove your feeders for a few weeks.

The best place to spot a Cooper’s Hawk is along the edges of the forest.

This offers them plenty of food to prey on and somewhere to set up their home. This bird of prey is resident in Maryland all year round and builds its nest on top of an older nest, high up in the trees.

If it can’t find somewhere to do this, it will also construct a nest supported by a dense clump of mistletoe.

Once completed, the female Cooper’s Hawk will lay between 2-6 pale blue eggs and incubate them for two weeks.

Once hatched, she’ll continue to keep an eye on them while hunting alongside the male, delivering food back to them.

There you have 7 different species of Hawk that you can spot in Maryland.

Many of these birds of prey reside in the State all year round, while others visit for the winter.

So, next time you’re visiting Maryland (or if you’re already in the State and want to go on a wildlife expedition) keep an eye on the skies for these incredible creatures.

And, if you’ve spotted something that you aren’t certain of, open up this list – we’re pretty sure you’ll be able to identify it quite quickly!