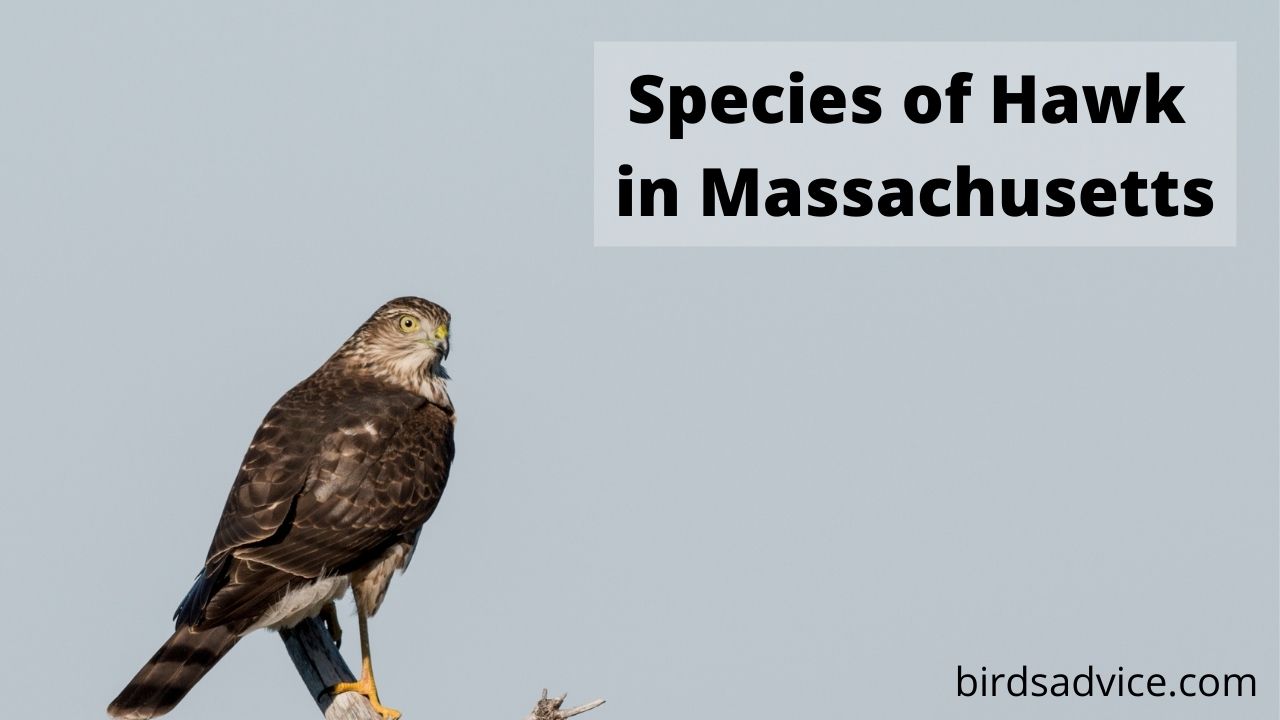 Believe it or not, Massachusetts is home to some of the most magnificent birds of prey you could ever wish to see.

Some are even residents all year round, meaning that no matter what the season, there’s always a good chance of spotting a Hawk in the skies.

But what Hawks are there in Massachusetts? If you’re looking for the answer to this question, you’ve come to the right place!

Below, you’ll find a list of 8 species of Hawk you can find in Massachusetts. Even better, you’ll learn how to identify them, find the best place to see them, and more.

There are many species of Hawk in Massachusetts, but the Cooper’s Hawk is one of the most commonly encountered.

It is also a non-migratory bird of prey and can be found in the State all year-round.

They can, however, be quite challenging to identify as they look pretty similar to the Sharp-Shinned Hawk. Both species have a blue-gray back, a rust-orange chest, and a checkered tail.

The Cooper’s Hawk’s head, however, sets the two species apart. Cooper’s Hawks have much larger heads than Sharp-Shinned Hawks, and their head also extends further beyond their shoulders.

Additionally, they have a wingspan of 30-inches and an average body length of 14-inches.

Forest edges are the best place to spot a Cooper’s Hawk. Here, they nest in tall trees, often reusing an abandoned nest or using a dense clump of mistletoe as a foundation.

Once the nest is ready, the female lays between 2-6 light blue eggs, and the couple will raise them together, help their chicks fledge, and then go their separate ways.

They also hunt in this habitat, grabbing any small mammals or songbirds they can find. They have also been known to hunt at bird feeders when food is scarce in their preferred habitat.

Named for their broad wings, the Broad-Winged Hawk is a stocky little hawk, averaging about 15 inches with an average wingspan of 34 inches. It also has a reddish-brown head, a short banded tail, and a barred chest.

They’re a rare sight in Massachusetts and are really only visible during the warmer months of April through October.

This is because they nest in Massachusetts, raise their brood, and then migrate south to Central and South America for the winter.

Their migration is also quite a spectacle, as large numbers gather in a whirling flock known as a ‘kettle’.

During the breeding season, the Broad-Winged Hawk will often reuse an existing nest rather than build a new one.

This could be an old crow or squirrel nest big enough for them to rest and raise their brood.

Once settled, the female Broad-Winged Hawk lays 2-3 white eggs, incubates, and rears them until they fledge in late summer.

You will most likely see a Broad-Winged Hawk high up in a tree or perch near a water source or open wooded area.

This gives them the ideal vantage point to track down their prey: frogs, small mammals, snakes, and baby turtles.

Dissimilar to a lot of different Hawk species on this rundown, the Rough-Legged Hawk is most typically found in Massachusetts throughout the cold winter months.

They return to the state in late October and remain until April. They then return to the Arctic for spring and summer and won’t get back to Massachusetts until the following October.

Their name comes from the rough-looking plumage that covers their legs, which assists with keeping them warm and shields them from the cool ice, and snow of their Arctic home.

They can likewise be distinguished by the dim spots on each wing’s curve and the dull spots on their underside and tail.

The Rough-Legged Hawk is longer and smaller than most different birds of prey, averaging around 20 inches and with a 53-inch wingspan.

The Rough-Legged Hawk’s eating regimen comprises principally of lemmings and voles, yet they likewise chase and eat other small mammals like ground squirrels and mice.

Their favored territory is open fields and marshes, where they frequently roost in strategic positions to get a superior vantage point.

The Rough-Legged Hawk constructs its home on a cliff edge, and the female lays somewhere in the range of 3 and 5 light blue eggs.

The Northern Goshawk is one more of Massachusetts’ resident species.

They can be distinguished by their dark upperparts, white and dim streaked underparts, and short, broad wings.

They likewise have a white stripe across their face which stands out wonderfully from their dazzling yellow eyes.

They are medium-sized hawks, estimated at around 23 inches long and with a wing length of 43 inches.

This type of bird of prey is non-transient and dwells in Massachusetts throughout the entire year. It can be seen in Alaska, Southern Canada, and the greater part of the precipitous west.

Northern Goshawks set up their home in coniferous or blended woodlands, the vast majority of which are really distant to people.

They seldom adventure from these areas too as they have all that they need here including their eating regimen of little birds and well evolved creatures.

This means that they are in the State all year round, they can be quite difficult to spot.

One fascinating thing about Northern Goshawks is that, unlike most other species of Hawk, they’ll build several nests prior to choosing the one they wish to raise their brood in.

As many as eight nests can be built by a mating couple before they pick the right one to call home, whereupon the female will lay 2-4 eggs that are somewhat blue white in variety.

The Northern Harrier should be visible in Massachusetts throughout the entire year, but it is generally seen more frequently throughout the fall and winter.

With a typical length of 18 inches and a wingspan of 44 inches, the Northern Harrier is a slender flying predator with long, wide wings.

They frequently position their wings higher than their bodies when they fly, giving them an obvious V-shape, which is one of the easiest ways to identify them during flight.

Male Northern Harriers can also be recognized by their dark upperparts, white underparts and a white patch on the rear end. Females don’t have these markings and are totally brown without the white rump patch.

The best place to spot a Northern Harrier in its favored territory of marshes and meadows. Here, they drift low over the ground looking for songbirds and small mammals to hunt and feed on.

They likewise set up home here, constructing their nests on the ground in thick vegetation like willow, reeds, and brushtail.

It’s quite easy to find a Red-Tailed Hawk in Massachusetts as they are the most abundant species in the State.

They are most common in summer and winter, when they are either hunting for their broods or for themselves to survive through the colder months.

Their markings make them very simple to identify, also. The Red-Tailed Hawk measures around 22-inches long and they have a typical wingspan of 50 inches, making them quite a spectacular sight as they drift and soar through the air.

As you might have guessed from their names, Red-Tailed Hawks have a blush-red tail that is short, wide, and fan-formed. They likewise have brown upperparts and pale-white underparts freckled with dark spots.

They build their homes high on cliff edges and tall trees, and they have also been known to settle tall towers and structures in metropolitan areas.

Dissimilar to many birds of prey, the Red-Tailed Hawk likes to kill rather than depend on carrion. They aren’t especially particular eaters either, and will feed on all manner of animals including reptiles and smaller birds.

Another of Massachusetts’ non-migratory flying predators, the Red-Shouldered Hawk is a common sight throughout the year.

As the name proposes, its red shaded shoulders are their greatest distinctive feature, but they can also be distinguished by their high contrast checkered wings and red stripes on their chests.

They are medium-sized Hawks, averaging around 20-inches long and a normal wingspan of 40-inches.

The best place to find a Red-Shouldered Hawk is in lush regions close to a water source like a waterway, stream, or lake.

Here, they hunt on the wing and snatch up snakes, small mammals, and frogs.

The Red-Shouldered Hawk also builds its home in this habitat. However, rather than building a new nest each breeding season, it will reuse the last year’s.

The female will lay up to 5 white-blue eggs and the pair will hatch and raise their brood together, then return to single life for the fall and winter.

The Sharp-Shinned Hawk is also one of Massachusetts’ non-migratory hawk species.

They are generally found at the edges of backwoods, where they utilize their mind blowing mobility and fly at high speeds, allowing them to navigate through thick branches and vegetation to catch smaller songbirds..

The Sharp-Shinned Hawk can be identified by its blue-gray back, red-orange breast, and checkered tail.

It looks surprisingly like the Cooper’s Hawk and, similarly, it has additionally been known to attack at garden bird feeders.

These nests are often as large as 2 feet wide and 6 inches deep. When ready, the female will rest up to 8 light blue dotted eggs and the pair will raise them together.

When the chicks have fledged, the pair will head out in different directions until next breeding season.

Whether you’re a Massachusetts resident or you’re simply visiting the State, be sure to keep an eye on the sky.

You never know; you might just spot one of these majestic birds of prey soaring right above your head!