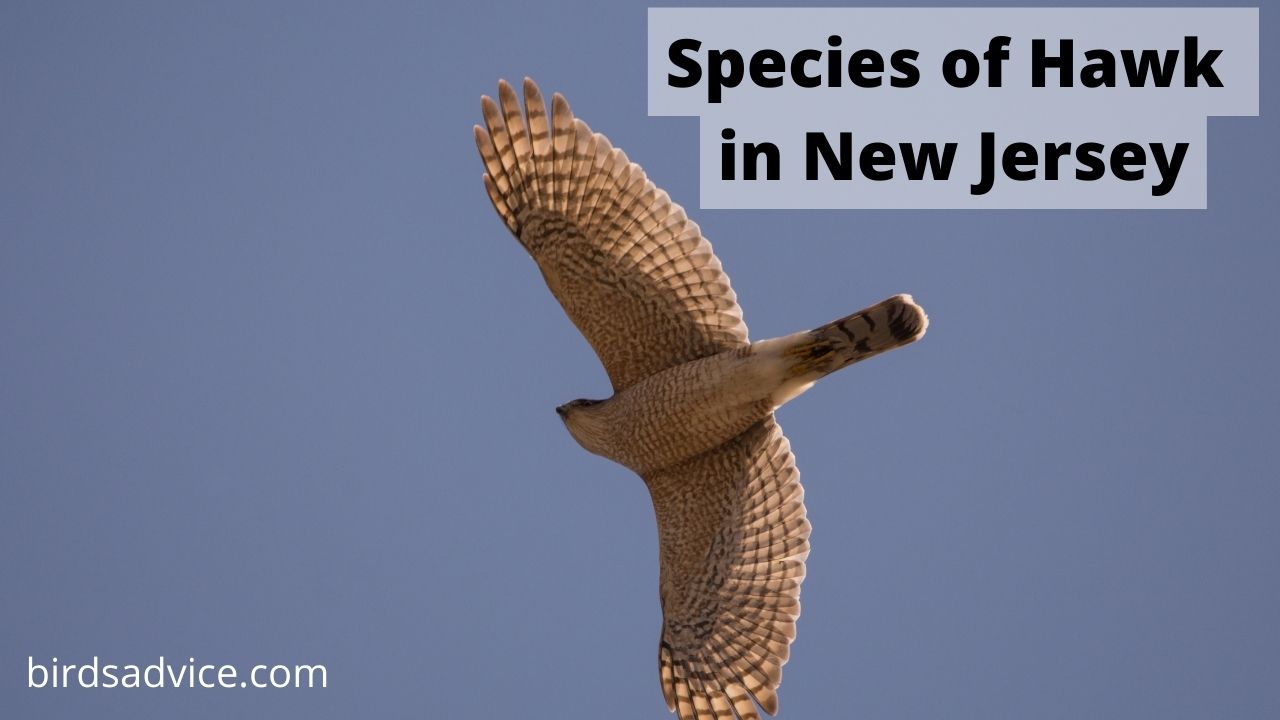 When you think of New Jersey, it’s pretty unlikely that wildlife and birds of prey are among the first things that come to mind.

But did you know that New Jersey is home to some of the most beautiful species of Hawks you’ll ever see?

Below, we’ll take a look at 8 species of Hawk that you can find in New Jersey.

We’re going to look at their identifying features, talk about their natural habitats, discuss what they eat, and more. In the end, you’ll know exactly what and where to look to see one of these fantastic creatures.

The Northern Goshawk is one more of New Jersey’s rarer species.

They can be identified by their dark upperparts, white and gray-streaked underparts, and short, wide wings.

They also have a white stripe across their face, contrasting with their bright yellow eyes.

They are also a medium-sized Hawk, averaging around 23-inches long and with a wing length of 43 inches.

This type of bird of prey visits New Jersey in the winter and sets up its home in coniferous or mixed woods, a large portion of which are inaccessible to humans.

They seldom venture from these areas too as they have all they need here, including their preferred prey of little birds and small mammals.

One fascinating fact about Northern Goshawks is that they’ll build several nests before deciding which to raise their brood in.

Sometimes as many as eight nests can be built by the mating couple before they pick the right one to call home, after which the female will lay 2-4 eggs that are pale blue white in variety.

The Rough-Legged Hawk is another species most commonly seen in New Jersey during winter.

They return to the state in late October and stay until April. They then return to their Arctic breeding grounds and will not return to New Jersey until the following October.

Their name comes from the rough-looking feathers covering their legs, which help keep them warm and protect them from the cold, ice, and snow of their Arctic breeding grounds.

They can also be identified by the dark spots at the bend of each wing and the dark spots on their underside and tail. In terms of size, the Rough-Legged Hawk is longer and narrower than most other hawks, measuring about 20 inches with a 53-inch wingspan.

The Rough-Legged Hawk’s diet consists primarily of lemmings and voles, but they also hunt and eat other small mammals such as mice and ground squirrels.

Their preferred habitat is open fields and marshes, where they often perch on high ground for a better vantage point.

When they return to their Arctic breeding grounds, they build their nest on a cliff edge and the female lays between 3 and 5 light blue eggs.

The Sharp-Shinned Hawk can be recognized by its blue-gray back, red-orange breast, and barred tail.

They measure around 11 inches and have a wingspan of around 19 inches. Females are around a third bigger than males.

As non-migratory birds, Sharp-Shinned Hawks can be found in New Jersey throughout the year.

However, they are more commonly spotted during the mid-year months while they raise their brood and when their prey is more plentiful.

Their favored prey is larks, which they’ll frequently catch on the wing before returning it to the security of a tree.

Here, they’ll strip it of its feathers and eat it. Sharp-Shinned Hawks also have no misgivings about diving down on patio bird feeders to get their prey.

The Sharp-Shinned Hawk’s preferred habitat is coniferous forests with thick cover, and they’ll roost and perch high up in the trees.

The nest they build during the breeding season is massive, measuring around 2 feet across and up to 6 inches deep.

When fully constructed, the female will lay between 3-8 blue-mottled eggs in this huge nest, and the couple will raise their brood together until they are completely fledged.

Another of New Jersey’s non-migratory birds of prey, the Red-Shouldered Hawk is a common sight year-round.

As the name suggests, their red colored shoulders are their biggest identifying feature, but they can also be identified by their black and white checkered wings and red stripes on their chest.

They are also relatively large hawks, measuring about 20 inches in length and an average wingspan of 40 inches.

The best place to spot a Red-Shouldered Hawk is in wooded areas near a water source such as a river, stream, or pond.

Here they hunt their prey on the wing, which includes snakes, frogs, and small mammals.

The Red-Shouldered Hawk also builds its nest in these areas, but instead of building a new one each breeding season, it will reuse last year’s.

Once any adjustments and reinforcements have been made to this existing nest, the female will lay up to 5 white-blue eggs and the pair will incubate and raise their brood together before reverting to solitary life for the fall and winter.

The Red-Tailed Hawk is one of New Jersey’s most common Hawk species. Additionally, it is non-migratory and can be seen all year round.

Numbers increase during August and May as well, when Red-Tailed Hawks from different parts of North America rush to New Jersey for the fall and winter.

Their biggest identifier is their namesake red tail, which is also short and wide. The two sexes have this, as well as brown upperparts and light yellow underparts. They additionally have a typical wingspan of 50 inches.

You’re most likely to see a Red-Tailed Hawk hovering over open fields looking for its prey.

Most sightings are from vehicles driving past open farmland and open country.

They can also frequently be seen roosting on utility poles, giving them a superior vantage point to scope out any small mammals, reptiles and birds that they might be in with a chance of hunting.

The Red-Tailed Hawk doesn’t make its home in this area, though. Instead, they return to the safety of the woods when it’s time to rest.

They likewise build their nests here, high up in trees or on cliff edges, although a few Red-Tailed Hawks have also been known to roost and nest in tall towers and structures in urban areas.

The Northern Harrier can be seen in New Jersey all year-round, but is most common in winter.

With an average length of 18 inches and a wingspan of 44 inches, the Northern Harrier is a slender bird of prey with long, broad wings.

They often position their wings higher than their body when flying, giving them a telltale V-shape, which is one of their easiest identifying traits.

Male Northern Harriers can also be identified by their gray top, white underparts and a white patch on the rump.

Females do not have these markings and are instead all brown without the white rump patch.

You will most likely spot a Northern Harrier in its preferred habitat of marshes and grasslands.

Here they soar low above the ground in search of small mammals to hunt and smaller songbirds.

They also nest in these areas, building their nests on the ground in dense vegetation such as willow, reeds, and bushtail.

Named for their wide wings, the Broad-Winged Hawk is a stocky little bird of prey that measures around 15 inches in length and has a typical wingspan of 34 inches.

It also has a red-earthy colored head, short tail, and a barred breast.

Not a common sight in New Jersey, the Broad-Winged Hawk is only active in the State between April and October.

They breed in New Jersey, raise their brood, and afterward travel South to Central and South America for winter.

Their relocation is a scene, too, as huge numbers gather in a twirling group known as a “kettle.”

During the reproducing season, the Broad-Winged Hawk will frequently reuse an existing nest instead of making another one.

This could be an old crow or squirrel nest, which will be large enough for them to rest in and raise their brood.

When settled, the female Broad-Winged Hawk lays 2-3 white eggs, broods, and raises them until they are prepared to fledge in pre-fall.

Broad-Winged Hawks nest and roost as high as possible in a tree near a water source.

They can sometimes be seen perched up high, giving them the ideal vantage point to search out their prey, which consists of frogs, snakes, young turtles, and small mammals.

The Cooper’s Hawk is one of the most common hawk species in New Jersey. It is also non-migratory, and sightings of this bird of prey have been reported throughout the year.

However, despite their abundance, they can be quite difficult to identify as they look remarkably similar to the Sharp-legged Hawk. They share the same blue-gray back, rust-orange chest, and banded tail.

However, what sets them apart is the size of their head. The Cooper’s Hawk has a much larger head than the Sharp-Shinned Hawk, reaching well beyond the wings.

They are also generally slightly larger, measuring an average of 14 inches and have a 30 inch wingspan.

The Cooper’s Hawk is not a migratory bird, but if temperatures get too cold as winter approaches, some may migrate further south to Honduras and Mexico for the winter.

The best place to spot a Cooper’s Hawk is at the edge of a forest. Here they nest in tall trees, often reusing abandoned nests or large clumps of mistletoe.

Here the female Cooper’s Hawk lays between 2-6 light blue eggs. The couple will raise them together, help them fledge and then go their separate ways.

They also hunt in this habitat, grabbing any small mammals or small songbirds they can find.

Like the Sharp-Shinned Hawk, the Cooper’s Hawk will also hunt from bird feeders when necessary. If you have this problem, remove your feeders for a few weeks to deter them.

There you have it – 8 species of Hawk you can find in New Jersey. Some are even residents all year round, giving you an excellent chance of spotting them.

Others, like the Rough-Legged Hawk, are winter visitors. This shouldn’t deter you from keeping an eye out for them, though. Each of the Hawks on this list should be “must-sees” on your bird-watching list!