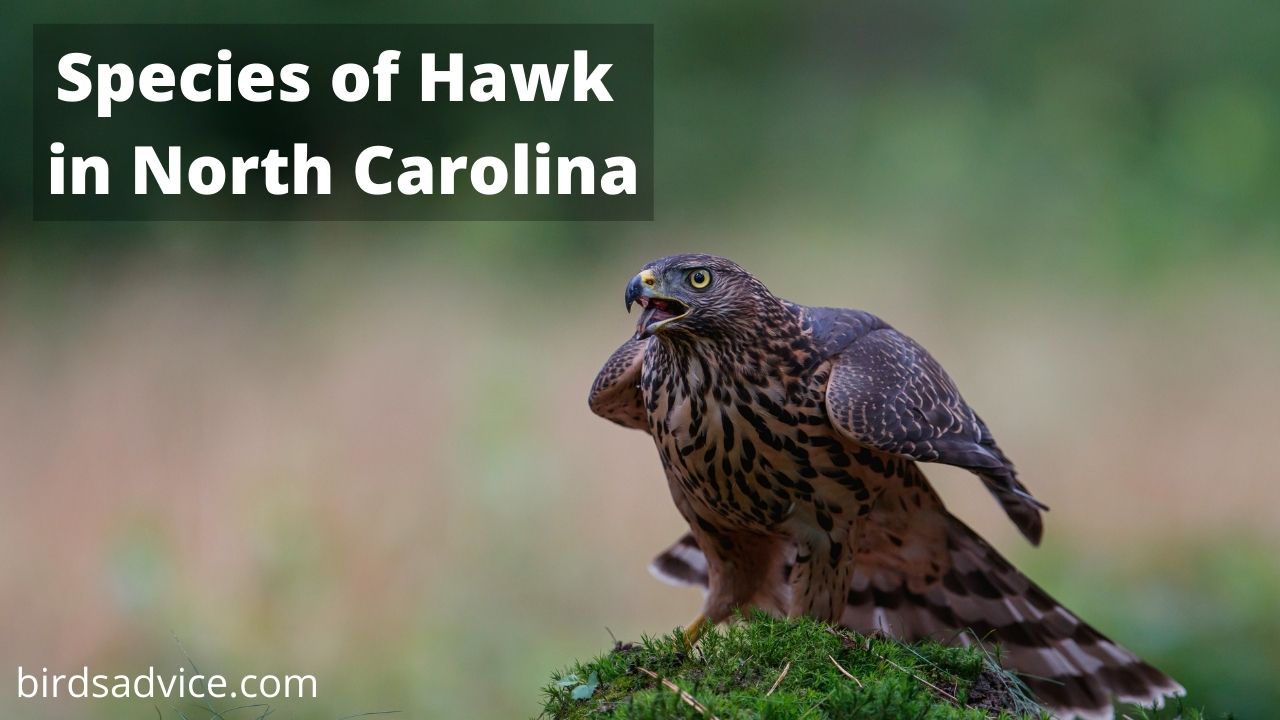 Have you ever seen a large bird circling a field or darting through the woods in North Carolina and wanted to know what it was?

Well, there’s a very good chance that you may have just seen a Hawk! That’s right; North Carolina is home to several species of Hawks.

To help you identify what you have just seen, we’ll look at 8 species of Hawk that you can find in North Carolina.

Some are year-round residents, while others visit seasonally. Either way, one thing is for sure – with this guide, you’ll be able to identify each of them with ease.

Let’s start with one of North Carolina’s non-migratory Hawk species. The Red-Shouldered Hawk can be found in the State all year round.

They are particularly common in the South of the State during spring and summer.

Named for the unique red tone they sport on either shoulder, the Red-Shouldered Hawk can also be distinguished by its checkered wings and red barring across the breast.

They are a medium-sized Hawk, averaging around 22-inches long and with a typical wingspan of 41 inches.

Their preferred living space is mixed woodland close to a water source, like a lake, stream, or river. Here, they chase after their prey along the edges of the water.

Their prey includes snakes, small mammals, and frogs which they have no issue grabbing up with their super-sharp talons!

They also set up home in this habitat during breeding season and, instead of building another nest every year, they’ll reuse an older nest in a wide-leaved tree.

The female Red-Shouldered Hawk will lay 2-5 light blue eggs in this nest. The mating couple will raise their brood together until they are completely fledged.

The Red-Tailed Hawk is one of the most commonly sighted in North Carolina. They are also non-migratory and can be seen year-round.

However, they are more common in spring and summer as Red-Tailed Hawks from other parts of North America migrate here during the breeding season.

As you might have guessed from its name, the Red-Tailed Hawk has a rusty red tail. This tail is also short and wide.

They can also be identified by their brown upperparts, pale yellow underparts, and large, rounded wings.

The red-tailed hawk measures about 20 inches and has a wingspan of 50 inches.

The Red-Tailed Hawk’s preferred habitat is mixed forest, where it rests high up in the trees.

However, they have also been known to nest and roost in urban areas, raising their brood in tall buildings and towers.

Once the nest is built, the female red-tailed hawk lays 2-3 brown spotted eggs and the pair raise their young together before helping them to fledge and go their separate ways.

If you cannot make it into the woods to see a red-tailed hawk, then don’t worry – most are seen circling high above open fields and farmland.

Here they scour the land in search of their prey, which includes reptiles, small mammals, and small songbirds.

As soon as they are spotted, they fall to the ground and use their fierce claws to snatch them up before carrying them away.

Sharp-Shinned Hawks are a winter visitor to North Carolina, heading to the State after raising their brood in their Arctic breeding grounds.

This type of Hawk is one of the smallest on our rundown, coming in at around 13 inches high and with a typical wingspan of 20-inches.

Females are around a third bigger than males, but this is the only way to tell the two sexes apart.

Each has blue-gray upper parts, red-orange breasts, and gray markings across their tails. They additionally have short wings and square-ended tails.

The Sharp-Shinned Hawk isn’t that common in North Carolina, and most stay in the safety of their preferred woodland territories.

They’re additionally very quick, impeccably navigating their way through leaves and branches in quest for their prey.

This for the most part comprises smaller songbirds, however they will also hunt and eat small mammals.

Should their food begin to turn out to become scarce, the Sharp-Shinned Hawk will branch out of its natural surroundings and chase birds from garden feeders.

If you’ve recently been suffering with this issue, the simplest way to stop it is to remove your bird feeders for a couple of weeks.

The Hawk will soon start looking elsewhere for its meal, and it won’t take long for you usual garden birds to start coming back.

The Sharp-Shinned Hawk nests extremely high up in the canopy of conifer trees, making a home that can be as large as 2 feet across and 6-inches deep.

When built, the female will lay up to 8 light blue eggs and hatch them. The couple will raise these chicks together prior to assisting them with fledging. They’ll then go their separate ways.

Another rare sighting in North Carolina, the Northern Goshawk is a winter visitor to the State and is most commonly spotted in the National Forests north of the state.

They are closely related to the Sharp-Legged Hawk, although they are much larger and considered a much tougher hunter!

At about 25 inches in length and an average wingspan of 43 inches, the Northern Goshawk is best identified by its black checkered markings on its gray body.

They also have a long tail, short, broad wings, and a white stripe running horizontally across their bright yellow eyes.

Extremely secretive, the Northern Goshawk’s preferred habitat is large forests, so you’ll need to do a bit of trekking if you want to tick this particular bird of prey off your bird watching list.

Be warned though – they have been known to become extremely territorial and defensive during the breeding season, attacking anything and anyone they perceive as a threat!

In these forests, they perch high in the trees and look out for their prey, including small songbirds and mammals.

They also nest in these areas, interestingly building up to 8 nests before deciding which is best to raise their brood in.

Another important note regarding the Northern Goshawk is that North Carolina is at the very edge of their winter territory, and many settle in several surrounding States.

As such, spotting one is quite rare but, if you do, you know that you’ll have experienced a once in a lifetime thing!

While most different species are found in spring and summer, the Rough-Legged Hawk is most usually seen in the colder time of year, especially between the long stretches of November and April.

The Rough-Legged Hawk is native to Alaska and Northern Canada. It spends its spring and summer there, and as winter draws near and it begins to turn excessively cold for them, they head somewhat further South to additional agreeable temperatures.

As you might have guessed from their name, the Rough-Legged Hawk is named after the rough-looking feathers it sports on its legs.

These feathers serve a purpose, keeping the bird protected and safeguarded when the weather conditions turn terrible and the temperatures truly begin to drop.

However, their padded legs are only one of their identifying features. They also have long wings with a wingspan of 53 inches. They additionally come in two varieties; light and dark morph..

They aren’t excessively particular eaters however, and will likewise chase and feed on other small mammals like ground squirrels, voles, and mice.

The Northern Harrier is one more of North Carolina’s winter-visiting Hawk species.

Averaging around 19-inches long and with a 44-inch wingspan, the Northern Harrier is one of few birds of prey that is easier to identify when it is in the air.

This is because it flies in a unique V-shape, with its wings situated high over the rest of its body.

Male and females are different in markings, with male Northern Harriers sporting gray upperparts and white underparts alongside a white patch on the rear end.

Females are an earthy-brown color all over and don’t have the white patch on the rump.

The best place to spot a Northern Harrier is in marshes or prairies looking for their prey, which for the most part comprises little birds and small mammals. They also roost in this habitat, building their nests in thick vegetation.

When the nest has been constructed, the female Northern Harrier will lay between 4-5 white eggs and brood them until they hatch. The mating couple will raise them together and, once fledged, they’ll head their different ways.

Another winter visitor, the Cooper’s Hawk can be found all over North Carolina from October to April.

However, those that live in the North will head further South throughout the colder time of year for hotter temperatures.

As a result, you have a greatly improved possibility of spotting a Cooper’s Hawk in the South of the State. .

Standing at a height of 15 inches and with a wingspan of around 30 inches, the Cooper’s Hawk looks surprisingly like the Sharp-Shinned Hawk.

They are somewhat larger however, and have blue-gray upperparts, a rust-orange breast, and a barred tail.

Even though their markings are practically the same, one thing that separates the Cooper’s Hawk from the Sharp-Shinned Hawk is their large head, which stretches out a long ways past the wings.

They aren’t scared to branch out of their area looking for a feast however, and they can be a threat to garden birds, swooping down and snatching them from feeders and tables.

There is a simple fix if you’ve been experiencing Cooper’s Hawks going after birds in your garden.

Remove your feeders for half a month and they’ll soon discover that there aren’t any birds to take out. It won’t take long for your usual garden visitors to begin flocking back to feeders once you reinstall them either. .

Fair-weather visitors to the state, Broad-Winged Hawks are found in North Carolina in the spring and summer between the months of April and October.

They come to the State to breed before returning to Central and South America in late fall to spend the winter in warmer temperatures.

During this migration, thousands of Broad-Winged Hawks congregate before soaring into the skies in a spectacle known as “kettle.”

With an average length of 15 inches and a wingspan of 34 inches, the Broad-Winged Hawk is a stocky little bird of prey. It’s named for its broad wings, but that’s just one of its distinguishing features.

During the breeding season, this species of hawk often uses an old, abandoned nest belonging to another animal. Here the female lays 2-3 white eggs and the pair raises them together.

They also hunt where they roost near a water source at the edges of forests. Here they scour the land from above in search of frogs, snakes, baby turtles and small mammals to feed on.

As you can see, there are 8 species of Hawk for you to keep an eye out for in North Carolina.

So, next time you’re out and about in this great State, keep an eye on the sky – you may just see something you’ve never seen before!