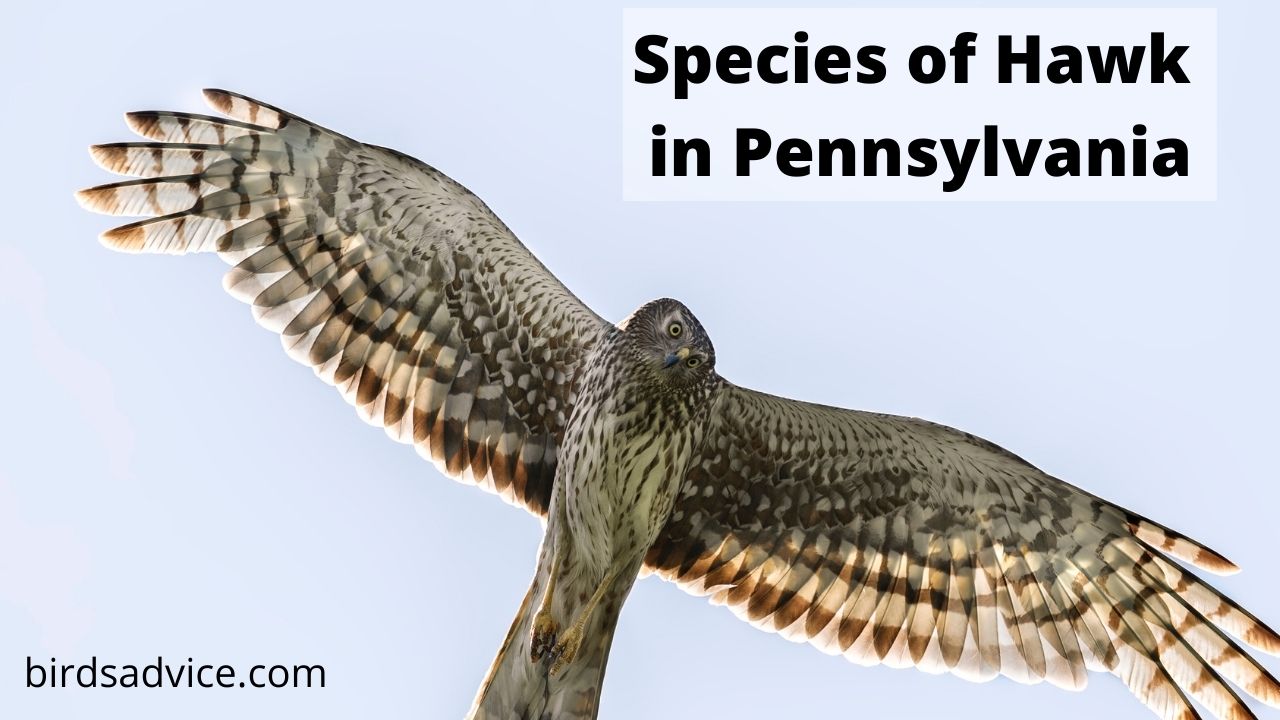 Are you a bird-watching enthusiast who either lives or is visiting Pennsylvania? Well, you’ve come to the right place!

Here, you’ll find a list of 8 species of Hawk you can spot in the Pennsylvania skies.

From year-round residents to seasonal visitors, you’ll find information on how to identify these magnificent birds of prey, what they eat, where to find them, and more!

The first species on our list is the Northern Harrier.

The Northern Harrier is one of Pennsylvania’s non-migratory Hawk species, although those that live in the North of State may move further South when the temperatures begin to drop.

Averaging around 19-inches long and with a 44-inch wingspan, the Northern Harrier is one of few birds of prey that is easier to recognize when it is in the air.

This is because it flies in a telltale V-shape, with its wings held high over the rest of its body.

Male and females carry different markings, with male Northern Harriers sporting gray upperparts and white underparts alongside a white patch on the posterior.

On the other hand, females are brown colored all over and don’t have the white rump patch.

You’re most likely to see a Northern Harrier gliding low across marshes or prairies looking for their prey, which for the most part comprises little birds and small mammals.

They additionally roost and nest here, building their homes in thick vegetation.

Once their nest has been built, the female Northern Harrier will lay between 4-5 white eggs and brood them until they hatch.

The mating couple will raise them together and, once fledged, they’ll head their different ways.

The Cooper’s Hawk is one of the most common types of Hawk in Pennsylvania and, although non-migratory, it is most commonly spotted throughout the late spring months.

They are visible in winter as well, although if temperatures drop very low some may head further South toward Mexico.

About the same size as a crow, the Cooper’s Hawk measures around 15 inches long and has a wingspan of around 28 inches.

This size is one of their clearest identifiers as they look strikingly like the Sharp-Shinned Hawk.

They have a similar blue-gray back, red-orange breast, and barred tail. In contrast to their lookalike, however, they have a much bigger head which sticks out past their wings.

The Cooper’s Hawk is usually found at the edges of woods where its prey is in greater abundance.

This includes small mammals and medium-sized songbirds. They have also been spotted close to bird feeders in gardens hoping to get an easy dinner when food in their preferred habitat is scarce.

This type of bird of prey sets up its home in old, deserted nests or in a huge cluster of mistletoe.

In the breeding season, the female will lay 2-6 light blue eggs and the male and female will raise them together until they are fledged.

The Northern Goshawk is one more of Pennsylvania’s rarer Hawk species.

They can be identified by their gray upperparts, white and gray streaked underparts, and short, broad wings. They also have a white stripe across their face that passes across each bright-yellow eye.

They are a medium-sized hawk as well, averaging around 23-inches long and with a wingspan of around 43-inches.

The Northern Goshawk is a non-migratory bird of prey in Pennsylvania, meaning it can be spotted throughout the year.

However, despite being in the State all year-round, it remains as one of the hardest to find species of Hawk. But why is this? Well, it’s all to do with its chosen habitat.

Northern Goshawks set up their homes in coniferous or blended backwoods, the majority of which are blocked off to people.

They seldom venture from these areas too as they have all that they need here including easy access to their preferred food source of small mammals and songbirds.

One fascinating fact about Northern Goshawks is that, unlike most other birds, they’ll build a few different nests before choosing which they believe is the right one to raise their brood.

In fact, there have been reports of a mating couple building as many as eight nests before settling on the right one to call home, whereupon the female will lay 2-4 eggs that are pale blue white in variety.

Sharp-Shinned Hawks are another non-migratory species you can find in Pennsylvania, staying in the State throughout the year.

This type of Hawk is one of the smallest on our rundown, averaging  13 inches high and with a typical wingspan of 20-inches.

Females are around a third bigger than males, but this is really the only difference between them as their markings are the same.

They each have blue-gray upperparts, red-orange breasts, and gray barring across their tails. They additionally have short, broad wings and square-ended tails.

Most Sharp-Shinned Hawks stay in the sanctuary of their woodland territories, making them fairly difficult to find.

They’re also very fast, and impeccable hunters, expertly navigating through leaves and branches in quest for their prey.

This for the most part consists of small songbirds, but they will eat small mammals too.

Should their prey become scarce, the Sharp-Shinned Hawks will branch out of their territory and hunt birds from garden feeders.

As with the Cooper’s Hawk, if you’ve been experiencing this issue simply remove your feeders for half a month.

The Sharp-Shinned Hawk nests exceptionally high up in the overhang of conifer trees, building a home that can be as large as 2 feet across and 6-inches deep.

When ready, the female will lay up to 8 light blue eggs and incubate them herself. The couple will raise these chicks together prior to assisting them with fledging.

The Rough-Legged Hawk can be seen in Pennsylvania for a very long time throughout the winter, with most sightings being recorded from November through to March.

Their name doesn’t come from the way that the skin on their legs looks, rather the plumes that cover them that give them their namesake “rough” appearance.

These rugged-looking feathers fulfill a vital need too, as they help to keep the bird protected and warm all through the coldest months of the year.

However, their padded legs aren’t their only identifying feature. The Rough-Legged Hawk also has white underparts, light-brown upperparts, and patches of brown on the tail, wings, and across its stomach.

They are also a medium-sized Hawk, measuring around 19 inches e and with a typical wingspan of 52 inches.

The most well-known spots for Rough-Legged Hawks are open fields and swamps, although they can also be found roosting on a utility pole.

This gives them the ideal vantage point from which to search out their prey, which primarily consists of lemmings.

Lemmings aren’t their only food source, though. They also feed on ground squirrels, voles, mice, and other small mammals.

Another non-migratory Hawk, the Red-Shouldered Hawk, should be visible in Pennsylvania throughout the entire year.

They are generally most common in the South of the State during spring and summer, and those further North may travel Southwards for the colder time of year.

Named for their unmistakable red coloring on both shoulders, the Red-Shouldered Hawk can also be recognized by its checkered wings and red barring across the breast.

They are a medium-sized Hawk, averaging around 22-inches long and with a typical wingspan of 41-inches.

Their prefered territory is mixed woodland close to a source of water, like a lake, river, or stream.

Here, they chase after their prey along the edges of the water. Their prey consists of small mammals, snakes, and frogs which they have no issue snatching up with the dangerously sharp talons!

They also set up home here during the breeding season and, as opposed to building another home every year, they’ll reuse an older nest situated in a wide leaved tree.

The female Red-Shouldered Hawk will lay 2-5 light blue eggs in this nest. The mating couple will raise their brood together until they are completely fledged.

The Red Tailed Hawk  is the most commonly seen bird of prey in the State of Pennsylvania.

They’re also non-migratory, so should be visible throughout the entire year. They are especially abundant during spring and summer.

As you might have speculated from their name, the Red-Tailed Hawk has a rust-red tail, which is also short and wide.

They can likewise be identified by their brown upperparts, light yellow underparts, and enormous wings.

The Red-Tailed Hawk averages around 20 inches long and has a wingspan of 50 inches.

The Red-Tailed Hawk’s prefered territory is blended forest, where it roosts high up in the trees.

They have additionally been known to roost and nest in metropolitan areas, utilizing tall structures and pinnacles to raise their brood.

When their nest is built, the female Red-Tailed Hawk lays 2-3 brown-spotted eggs and the couple raise their young together prior to assisting them with fledging, and heading in different directions.

When it comes to hunting, the Red-Tailed Hawk scours the land searching for its prey, which incorporates reptiles, small mammals, and smaller birds.

Once spotted, they’ll plunge to the ground and utilize their savage talons to grasp them up prior to feeding on them.

Broad-Winged Hawks can be tracked down in Pennsylvania throughout the spring and summer between the long stretches of April and October.

They come to the state to raise their broods before going to Central and South America in the fall to spend winter in hotter temperatures.

During this migration, many Broad-Winged Hawks assemble before taking to the skies in a spectacle known as a “kettle”.

The Broad-Winged Hawk is a stocky little flying predator, averaging around 15 inches long and with a wingspan of 34 inches.

It’s named for its wide wings yet this is only one of its distinguishing features. The Broad-Winged Hawk also has a short, square tail, barred breast, and red-earthy colored head.

During the breeding season, this type of Hawk will frequently reuse another animal’s old, deserted nest.

Here, the female will lay 2-3 white eggs and the pair will raise them together. They’ll likewise hunt where they nest in the edges of woodlands close to a source of water.

Here, they’ll scour the land from up high, searching for frogs, snakes, baby turtles, and small mammals to feed on.

As you can see, Pennsylvania is home to some of the most beautiful Hawks you could ever wish to check off your bird watching list!

So, next time you’re out and about in this great State, turn your attention to the sky – you might just see one of these beautiful birds of prey soaring high above your head.