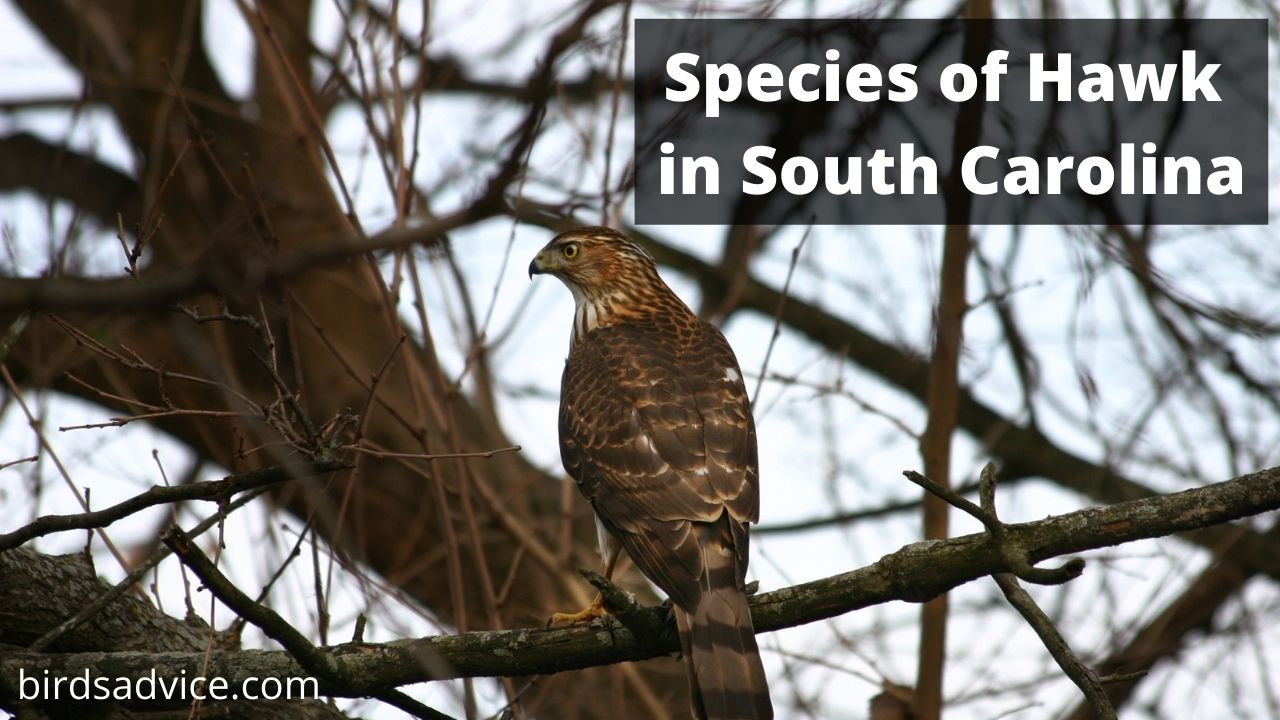 Looking for different species of Hawk in South Carolina? You’ve come to the right place!

Here, we’re going to explore 6 species of Hawk that you can spot in South Carolina. We’ll look at their identifying features, feeding habits, preferred habitat and more.

In the end, you’ll have a much better idea of where to find each of these species and, more importantly, you’ll be able to tick them all off your bird watching list!

Let’s start by looking at one of South Carolina’s winter-visiting Hawk species; the Cooper’s Hawk.

This magnificent bird of prey measures around 15 inches in length and has an average wingspan of 32-inches, with the female being larger than the male.

The Cooper’s Hawk can be identified by its blue-gray upperparts and rust-orange breast. It also has a dark, banded tail.

These markings make it remarkably similar to the Sharp-Shinned Hawk (which we’ll look at a little further down the page) but there is one clear difference between the two.

The Cooper’s Hawk is much larger. It also has a larger head extending well beyond its wings, which is especially apparent during flight.

Most Cooper’s Hawks are spotted flying along forest edges in search of food, which includes small mammals and medium-sized songbirds.

They will, however, search beyond their territory and have been known to snatch birds from backyard feeders when times get tough.

Don’t worry too much if you’ve seen this happening in your garden. Removing your bird feeders for a couple of weeks is usually enough to deter the Cooper’s Hawk from visiting your garden.

Better yet, it won’t take very long for your usual feathered friends to start returning for their food.

The Broad-Winged Hawk is a spring and summer visitor to South Carolina, spending this time in the State to breed and raise their brood.

Once their chicks have fledged, they’ll start heading to South America to spend the winter in warmer temperatures.

They leave with a bit of a spectacle though, with hundreds of Broad-Winged Hawks gathering together and performing a swirling aerial display known as a “kettle”.

With this in mind, one of the best times to see a Broad-Winged Hawk is during the fall, just as they start to venture out of their habitats to take to the sky.

The easiest way to identify a Broad-Winged Hawk (when not gathered together) is by their red-brown heads, banded tails, and barred breasts.

As their name suggests, their tail is also quite broad but short and squared-off at the end.

This bird of prey sets up home along the edges of woods, particularly favoring areas near a source of water.

Here, they hunt for their prey by perching up high and using their amazing eyesight to pinpoint and swoop down with one killer blow.

Another winter visitor to South Carolina, the Northern Harrier heads to the State after it has spent the spring and summer breeding in the Northern States and Canada.

This slender bird of prey measures around 19-inches in length and has an average wingspan of 43-inches.

Males and females have different markings. The male Northern Harrier has gray upperparts, white underparts, and a dark brown tail with a white patch on the rump.

On the other hand, the female Northern Harrier is much duller and is covered with brown feathers.

Both sexes can be identified by their unique flight habits though, which consists of positioning their wings high above their body. This forms a telltale V-shape.

Most sightings of the Northern Harrier are reported in grasslands and marshes, where they fly close to the ground in search of smaller birds and small mammals to feed on.

They also nest in these areas, choosing dense vegetation to construct their nests and raise their brood.

The Cooper’s Hawk doppelganger, the Sharp-Shinned Hawk is almost identical in appearance.

As we’ve detailed above, however, it is much smaller and carries its head closer to its body.

It is also non-migratory so if you spot this bird of prey in the summer, it’s much more likely to be a Sharp-Shinned Hawk than a Cooper’s Hawk.

Despite remaining in the State all year round, the Sharp-Shinned Hawk remains fairly elusive. The best place to spot one is at the edges of forests, where they soar through the air in search of food.

They also have incredible agility and can reach very high speeds, allowing them to navigate through dense branches and vegetation to catch smaller songbirds.

The Sharp-Shinned Hawk also has a unique habit of feeding. It will carry its kill back to a tree branch and pluck all the feathers from it before using its razor sharp beak and claws to tear through its flesh.

Much like the Cooper’s Hawk, it has been known to hunt at garden bird feeders, but following the advice we’ve given above should help to deter this.

This bird of prey will also nest in its chosen hunting area, building large nests high up in conifer trees surrounded by dense cover.

These trees can be as large as 2 ft across and 6-inches deep. Once constructed, the female will lay up to 8 pale-blue mottled eggs and the couple will raise them together.

Once the chicks are fully-fledged, the couple will go their separate ways.

Another of South Carolina’s non-migratory birds of prey, the Red-Shouldered Hawk is quite a common sight all year round.

As their name suggests, their biggest identifiable feature is their red-colored shoulders, but they can also be identified by their black and white checkered wings and red barring on the breast.

They are relatively large Hawks as well, measuring around 20-inches in length and with an average wingspan of 40-inches.

The best place to spot a Red-Shouldered Hawk is in forested areas near a source of water, such as a river, stream, or pond.

Here, they hunt for their prey on the wing, which includes snakes, small mammals, and frogs.

The Red-Shouldered Hawk also builds its nest in these areas but, rather than building a new one each breeding season, will reuse last year’s.

Once settled, the female lays up to 5 white-blue eggs and the couple incubates and raises their brood together before going back to their solitary lives for the fall and winter.

It’s not hard to miss a Red-Tailed Hawk, and this is mostly due to their hunting habits.

They’ll often be seen circling high above open fields along the side of the road, as well as perched on top of telephone poles scoping out the area.

Female Red-Tailed Hawks are a little larger than males, measuring in at around 22-inches long and with a wingspan of up to 52-inches.

However, both sexes have similar markings and can be identified by their namesake red tail. They also have brown upperparts, pale underparts, and broad wings with rounded edges.

The Red-Tailed Hawk nests high up in the canopy of trees or along cliff edges, although they have also been known to construct nests at the top of tall buildings and towers.

There are a total of 6 different species of Hawks that can be spotted in South Carolina. Some are even non-migratory, so can be seen all year round if you’re looking in the right place!

Others, however, you’ll have to wait until winter to see. Regardless of season, one thing is for sure; South Carolina is home to some of the most majestic birds of prey you’ll ever see.