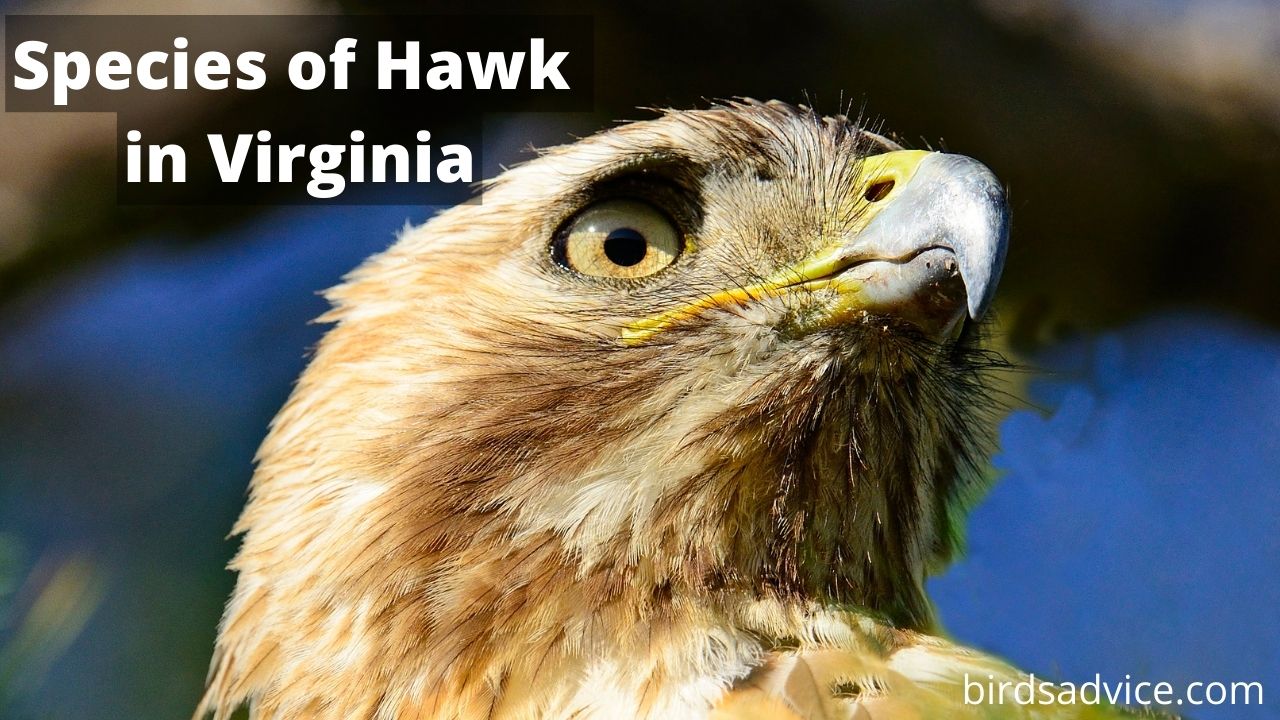 Have you spotted a large bird soaring through the air in Virginia recently? Or, perhaps you’re planning to take a trip to the State to see what wildlife you can discover.

Whether you’re looking to identify or seek out, you’ve come to the right place!

Below, you’ll find information on 8 species of Hawk you can see in Virginia.

From seasonal visitors to year-round residents, we’ll guide you through their identifying features, give you some pointers on where to find them, discuss their diets, and more.

The Red Tailed Hawk is the most frequently seen species in Virginia.

They’re also non-migratory, which means they can be spotted all year-round.

They are particularly plentiful during spring and summer as they look for nesting material and hunt more prey to feed their chicks.

As you can imagine from its name, the Red-Tailed Hawk has a rust-red tail, which is also short and wide.

They can also be identified by their brown upperparts, light yellow underparts, and huge wings.

The Red-Tailed Hawk measures around 20 inches long and has a wingspan of 50 inches.

The Red-Tailed Hawk’s preferred habitat is mixed forests and woods, where it roosts and nests high up in the trees.

They have also been known to occupy urban areas, using tall buildings and towers to raise their brood.

Once their nest is complete, the female Red-Tailed Hawk lays 2-3 brown-spotted eggs, and the couple raises their young together before helping them to fledge.

Regarding hunting, the Red-Tailed Hawk scours the land looking for its prey, including reptiles, small mammals, and songbirds.

Once locked on, they’ll plunge to the ground and use their fierce talons to get a grip on them.

The Northern Goshawk is one of Virginia’s more uncommon Hawk species.

They can be identified by their dark upperparts, white and gray-streaked underparts, and short, broad wings. They also have white stripes across their face.

They are a medium-sized Hawk, averaging around 23-inches long and with a wingspan of around 43-inches.

Winter visitors to the State, Northern Goshawks set up their homes in coniferous or mixed forests, most of which are inaccessible to humans.

They rarely adventure from these areas as they have all they require here, including access to their favored food of small mammals and songbirds.

Northern Goshawks nest quite differently to other birds of prey.  Rather than building just one nest, they’ll construct multiple potential nests before picking which they accept is the right one to raise their brood.

There have been reports of a mating couple constructing upwards of eight homes before choosing the right one to call home; after that, the female will lay 2-4 eggs that are light blue.

The Rough-Legged Hawk should be visible in Virginia all through the colder time of year for quite a while, with most sightings being recorded from November through to March.

Their name doesn’t come from how the skin on their legs looks, but rather the tufts that cover them that give them their namesake “rough” appearance.

These rough-looking plumes help keep the bird protected and warm all through the coldest months of the year and in their Arctic breeding grounds.

Their roughly-feathered legs aren’t their only identifying feature, though. The Rough-Legged Hawk also has white underparts, light-brown upperparts, and patches of brown on the tail, wings, and across its stomach.

They are a medium-sized Hawk, averaging around 19 inches long and with a wingspan of 52 inches.

The most common sighting spots for Rough-Legged Hawks are open fields and marshes, and they have also been seen perched high atop a telephone pole.

This gives them the ideal vantage point from which to look for their prey, which mainly consists of lemmings.

However, lemmings aren’t their main food source. They likewise feed on ground squirrels, voles, mice, and other small mammals..

Sharp-Shinned Hawks are another non-migratory Hawk species you can spot in Pennsylvania all year-round.

This Hawk is one of the smallest on our list, averaging 13 inches high and with a wingspan of 20-inches. Females are around a third greater than males, but this is the main contrast as their markings are the same.

Each has blue-gray upper parts, red-orange breasts, and dark banding across their tails. They also have short, broad wings and square-ended tails.

Most Sharp-Shinned Hawks stay in the haven of their forest domains, making them quite challenging to track down.

They’re additionally extremely quick and agile, masterfully flying through leaves and branches in pursuit of their prey. This generally consists of small mammals and songbirds.

Should their prey become scarce, the Sharp-Shinned Hawk will stretch out of their area and hunt birds feeding from garden feeders.

The Sharp-Shinned Hawk settles very high up in the shade of conifer trees, building a home that can be as big as 2 feet across and 6-inches deep.

The female will lay up to 8 light blue eggs and brood them herself when prepared. The couple will raise these chicks together and then head their separate ways.

Broad-Winged Hawks can be found in Virginia between April and October in the spring and summer.

They come to the State to raise their broods before going to Central and South America in the fall to spend winter in warmer temperatures.

During their migration, an enormous number of Broad-Winged Hawks gather and, before taking to the skies, perform an aerial display known as a “kettle.”

The Broad-Winged Hawk is a stocky bird of prey, averaging around 15 inches long and with a wingspan of 34 inches.

It’s named for its wide wings, yet this is only one of its distinctive features. The Broad-Winged Hawk also has a short, square tail, barred breast, and red head.

During the breeding season, this species of Hawk will reuse an old, abandoned nest of another animal rather than going to the effort of constructing their own.

In this reclaimed nest, the female will lay 2-3 white eggs and the pair will raise them together.

The Broad-Winged Hawk is easiest to find at the edges of forests near a water source.

Here, they’ll scour the land from as high as possible, looking for frogs, snakes, baby turtles, and small mammals to feed on.

The Northern Harrier is one of Virginia’s winter-visiting Hawk species.

Averaging around 19-inches long and with a 44-inch wingspan, the Northern Harrier is one of few birds of prey that is easiest to identify when it is high in the air.

This is because it flies in an obvious V-shape, with its wings held high over its body.

Male and females have very different markings, with male Northern Harriers sporting gray upperparts, white underparts, and a white patch on the rump.

Females are brown-colored everywhere and don’t have the white posterior patch.

You’re most likely to spot a Northern Harrier gliding low across marshes or grasslands searching for their prey, generally made up of small mammals and songbirds.

They also roost and nest here, building their homes in thick vegetation.

When their home has been fabricated, the female Northern Harrier will lay between 4-5 white eggs and brood them until they hatch.

The mating couple will raise them together and, once fledged, they’ll head their various ways.

The Cooper’s Hawk is one of the most common species of Hawk in Virginia and, even though it is non-migratory, it is most often spotted all through late spring into summer.

You may also spot one in winter but if the temperatures become extremely low some might make a beeline for Mexico.

Similar in size to a crow, the Cooper’s Hawk averages around 15 inches long and has a wingspan of around 28 inches.

This size is one of their most clear identifiers as they are very similar in appearance to the Sharp-Shinned Hawk. They have a blue-gray back, red-orange breast, and barred tail.

They have a much bigger head, which sticks out past their wings.

The Cooper’s Hawk is normally found at the edges of woods where its prey is in more abundance.

This is mostly made up of small songbirds and small mammals. They have also been spotted near bird feeders in gardens wanting to get a simple supper when food in their favored territory is scant.

The Cooper’s Hawk sets up its home in old, abandoned nests or in a gigantic bunch of mistletoe.

In the rearing season, the female will lay 2-6 light blue eggs and the male and female will raise them together until they are fledged.

Another non-migratory Hawk, the Red-Shouldered Hawk, can be spotted in Virginia throughout the year.

They are most common in the South of the State during spring and summer, and those further North might travel Southwards for the colder season.

Named for their obvious red shading on the two shoulders, the Red-Shouldered Hawk can also be identified by its checkered wings and red barring across the bosom.

They are a medium-sized Hawk, averaging around 22-inches long and with a common wingspan of 41-inches.

Their prefered region is mixed forests near a source of water. Here, they pursue their prey along the edges of the water.

Their prey comprises small mammals, snakes, and frogs which they have no issue grabbing up with their sharp claws!

They likewise set up home here during the breeding season and, rather than building another home each year, they’ll reuse an old nest that is arranged in a wide leaved tree.

The female Red-Shouldered Hawk will lay 2-5 light blue eggs in this nest. The mating couple will raise their brood together until they are fledged.

There you have it – 8 species of Hawk you can find in Virginia. Regardless of the time of year – look in the right place and you stand a good chance of spotting one of these magnificent birds of prey.

Even better, with our identification advice for each, you’ll know exactly which species you’ve just seen speeding through the air or perched on a telephone pole.