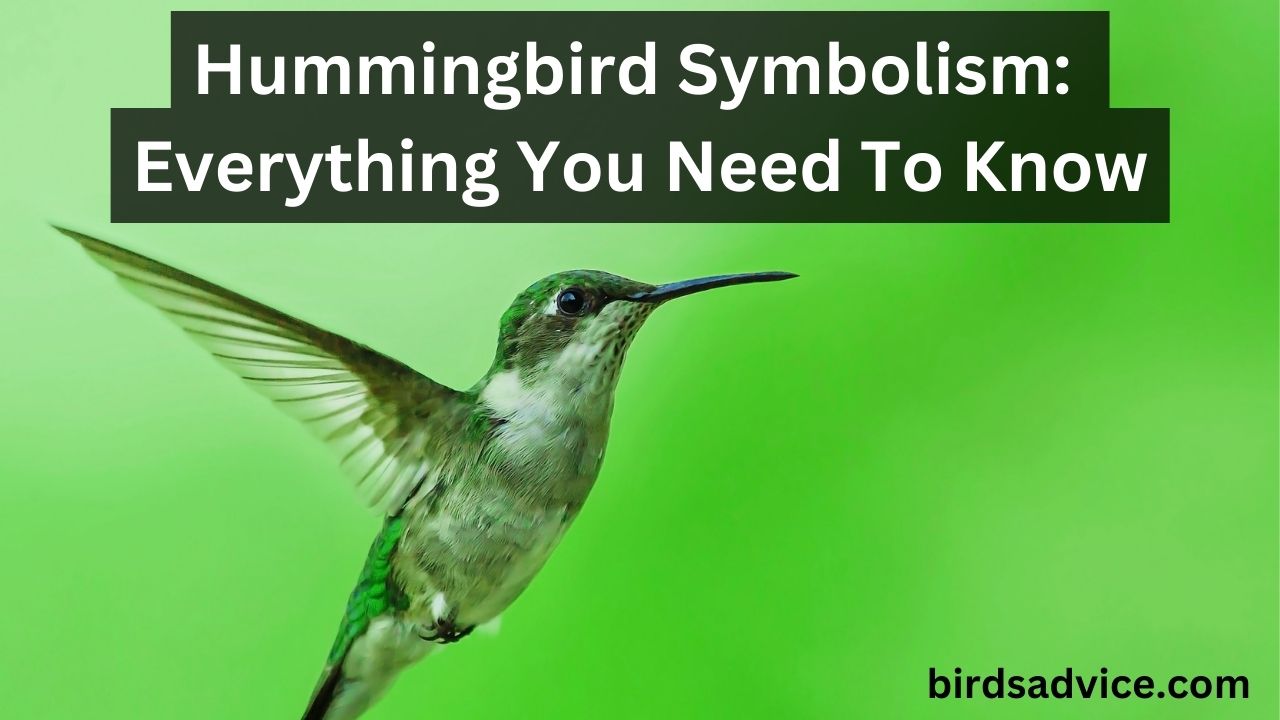 Since the dawn of time, birds have been seen as more than mere creatures.

Symbolism, mythology, and suspicion have all been associated with birds and, as with all aspects of symbolism, seeing or hearing different types of birds can mean different things.

Here, we’re going to look at Hummingbird symbolism. We’ll discuss what it means if you see one, their place in mythology, the folklore surrounding Hummingbirds, and more.

What It Means If You See A Hummingbird

If you see a Hummingbird, it can symbolize a variety of things depending on the context and your personal beliefs and experiences.

Some people believe that Hummingbirds are a symbol of joy, love, and beauty, and seeing one can be a reminder to appreciate the beauty in life.

Others believe that Hummingbirds are a symbol of good luck and can bring positive energy to a situation.

Some cultures also associate Hummingbirds with endurance, strength, and the ability to adapt to change, as these birds are able to fly long distances and thrive in a variety of environments.

In many cultures around the world, Hummingbirds have held symbolic significance and have been featured in myths and legends.

Here are a few examples of Hummingbird symbolism in mythology:

Hummingbirds are often seen as symbols of joy and celebration in some Native American stories, and are said to bring good luck and positive energy to those who see them.

One such story is the “Legend of the Cherokee Hummingbird”.

The story goes that the Hummingbird was once a much larger bird, but it was so concerned with the happiness and well-being of others that it flew around constantly, spreading joy wherever it went.

One day, the Great Spirit saw the Hummingbird working so hard and decided to shrink it down to its current size so that it could continue its work without tiring.

The Hummingbird has since become a symbol of the importance of bringing joy and love into the world, and is often seen as a messenger of hope and peace.

In Cherokee culture, it is believed that if you see a Hummingbird, it is a sign that you are on the right path and that good things are coming your way.

In South American Mythology, Hummingbirds are sometimes associated with the sun and are believed to have the ability to bring light and warmth to the world.

In some stories, Hummingbirds are said to be the messengers of the gods, carrying messages between the spiritual and physical worlds.

In Aztec mythology, Hummingbirds are associated with the god Huitzilopochtli, who was the patron deity of the Aztec capital, Tenochtitlan.

Huitzilopochtli was said to be able to transform into a Hummingbird and was often depicted with Hummingbird feathers in his headdress.

Hummingbirds are sometimes associated with love and happiness in Chinese mythology.

In some stories, Hummingbirds are said to be the messengers of the goddess of love and are believed to bring love and happiness to those who see them.

These are just a few examples of the ways in which Hummingbirds have been featured in myths and legends from different cultures around the world.

The specific symbolism of Hummingbirds may vary depending on the culture and context.

There is not a lot of specific information available about the symbolism of Hummingbirds in Celtic folklore. Hummingbirds are not native to Europe, so they were not a part of the traditional folklore of the Celtic peoples.

However, it is possible that Hummingbirds have been incorporated into some modern interpretations of Celtic spirituality.

For instance, some Celtic mythology suggests that the presence of a Hummingbird can mean a message is being delivered by the Gods.

This might be a symbol of courage ahead of a battle, or a divine intervention when guidance is most needed.

According to an Apache tribe legend, Hummingbirds are seen as symbols of joy and love. The Apache believe that Hummingbirds are messengers of the Great Spirit and that they bring good luck to those who see them.

In the legend, Hummingbirds are said to be able to bring rain, and they are often associated with renewal and new beginnings.

According to the legend, Hummingbirds have the ability to transform negativity into positivity and to bring happiness to those who are feeling sad or down.

The Apache believe that Hummingbirds are powerful symbols of hope and renewal, and they are often seen as symbols of resilience and perseverance.

In Feng Shui, Hummingbirds are often associated with love, joy, and abundance.

It is believed that having a Hummingbird in your home or garden can bring positive energy and attract good fortune.

There are several ways to incorporate Hummingbirds into your Feng Shui practice:

It is important to remember that in Feng Shui, the symbolism of an object or creature is more important than the object itself.

Therefore, it is the intention and energy behind the use of Hummingbirds in Feng Shui that is most important, rather than the specific object or representation.

Some birds, particularly the Dove, have held a place in the symbolism of Christianity for millennia.

But, while there is not a specific reference to Hummingbirds in the Bible or Christian theology,, some Christian believers may find symbolism or meaning in Hummingbirds based on their own personal experiences or interpretations.

Here are a few examples of how Hummingbirds might be interpreted symbolically in a Christian context.

For instance, Hummingbirds are often seen as symbols of joy, and this joy can be seen as a gift from God.

Hummingbirds are also known for their ability to hover in one place, and this ability to remain still and focused could be interpreted as a reminder to stay centered on God and his will.

The beauty and uniqueness of Hummingbirds might also be seen as a reflection of the diversity and beauty of God’s creation.

In many cultures, Hummingbirds are seen as symbols of hope and good luck, and their presence is often interpreted as a positive omen.

For example, seeing a Hummingbird hovering near you might be seen as a sign that your wishes or prayers will be answered, or that good things are coming your way.

Hearing the sound of Hummingbird wings might be seen as a sign of good news or a message from the spirit world.

Likewise, if a Hummingbird appears unexpectedly or in an unusual place, it might be seen as a sign of good luck or a message from the spirit world.

Remember, however, that what one person sees as a positive omen might be seen as a neutral or even negative sign by another person.

Ultimately, the significance of a Hummingbird as an omen will depend on your own beliefs and experiences.

As with interpreting all dreams, the symbolism of Hummingbirds in dreams can vary, depending on the context and other details of the dream.

However, there are a few possible interpretations of Hummingbirds in dreams.

First of all, Hummingbirds are famously seen as symbols of joy and happiness, so dreaming of a Hummingbird might be a positive sign, indicating that you are feeling happy and content in your waking life.

Hummingbirds are also associated with love and relationships, so dreaming of a Hummingbird might symbolize a loving relationship or the desire for one.

They are also known for their ability to hover in one place, so dreaming of a Hummingbird might indicate that you are feeling stuck or unable to move forward in some area of your life.

It is important to remember that dream symbolism is highly personal and can vary from person to person.

The best way to interpret the symbolism of Hummingbirds in your dreams is to consider the overall context of the dream and how it relates to your own life and experiences.

Hummingbirds As A Spirit Animal

A spirit animal is a creature that is believed to have a special meaning or significance for a person, and is often seen as a symbol of that person’s inner nature or spiritual growth.

Hummingbirds are sometimes thought of as spirit animals because of their many positive associations, including joy, love, transformation, and endurance.

As with all aspects of symbolism, there are a few possible meanings of the Hummingbird as a spirit animal.

First of all, if the Hummingbird is your spirit animal, you may be a joyful and lighthearted person who is able to find happiness in even the most difficult circumstances.

The Hummingbird’s association with love and relationships might indicate that you are a caring and affectionate person, or that you value close connections with others.

The Hummingbird’s ability to migrate long distances and undergo transformation might also indicate that you are a resilient and adaptable person, who is able to overcome challenges and embrace change.

Finally, the Hummingbird’s small size and delicate appearance might indicate that you are a sensitive and gentle person, who is attuned to the needs of others.

Remember, however, that spirit animal symbolism is an incredibly personal thing.

If the Hummingbird is your spirit animal, it is important to reflect on what this creature means to you and how it relates to your own inner nature and spiritual journey.

Just because it symbolizes something for one person, it may not hold the same symbolism for you.

Hummingbirds As A Power Animal

A power animal is a natural object, animal, or plant that is believed to have spiritual power and is used as a symbol of personal strength or spiritual growth.

Hummingbirds are sometimes seen as power animals because of their many positive associations, including joy, love, transformation, and endurance.

If the Hummingbird is your power animal, you may be a joyful and lighthearted person who is able to find happiness in even the most difficult circumstances.

In the world of symbolism and omen, Hummingbirds are undoubtedly the one of the most positive.

Unlike many other birds, there are absolutely no negative connotations associated with the Hummingbird so, whether you’ve seen one or dreamt of one, it’s almost guaranteed that good things are coming your way!