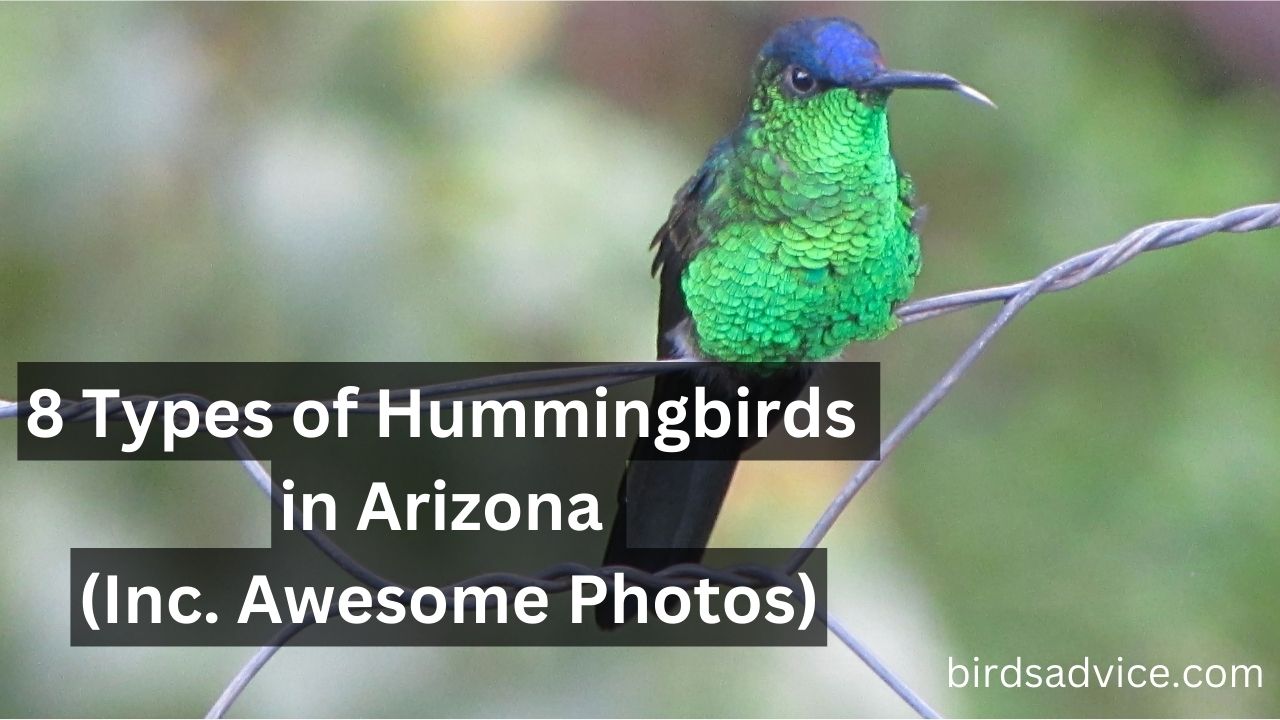 With its desert landscapes, you’d be forgiven for thinking that Arizona’s wildlife is catered for lizards, birds of prey, snakes, and other hardy animals.

But, did you know that Arizona is actually a haven for many different species of exotic and rare bird species. And, of all of them, it’s the Hummingbird that has to be the most beautiful of all.

But what species of Hummingbird can you find in Arizona?

Whether you’re visiting the State or you’re a resident, if you’ve been asking yourself this question you’ve come to the right place.

Below, you’ll find 8 types of Hummingbirds you can spot in Arizona. We’ll go through their identifying features, look at their preferred habitats, explore their diets, and more.

If you don’t have time to go into too much detail about each Hummingbird and need a quick guide to what species live in Arizona, check out the list below.

The 8 types of Hummingbirds that you can find in Arizona are:

Now, let’s look at each of these in more detail.

The Blue-Throated Hummingbird is one of the larger species of Hummingbird, measuring around 5-inches long and tipping the scales at 10g.

It can be identified by the iridescent bronze-green feathers that cover the majority of its body along with its namesake blue throat, which also has an iridescent quality.

It also has a white stripe above and below each eye. Male and female Blue-Throated Hummingbirds are very similar in appearance, the only difference is that the female does not have the namesake blue throat.

Like most Hummingbirds, the Blue-Throated Hummingbird’s preferred food of choice is flower nectar.

However, it also eats insects and can be found hovering around flowers and trees in search of plant lice, spiders, and other small insects.

The best place to spot a Blue-Throated Hummingbird in Arizona is at high elevations of 4,000 to 12,000 feet.

Here, they set up their homes in coniferous forests, mixed woodlands, and any other area with dense cover near a source of water.

One interesting fact about the Blue-Throated Hummingbird is that, while it is one of the largest species, it is capable of beating its wings almost twice as fast as smaller Hummingbirds.

This can be as much as 24 times per second! It’s also a very territorial bird and several Blue-Throated Hummingbirds may flock together to attack predatory birds that come too close for comfort.

As you may have guessed from its name, the main identifying feature of the Black-Chinned Hummingbird is its distinctive black throat.

This has an iridescent purple patch underneath as well, while the head and upperparts are a metallic black-green color and the underparts are a light gray.

There is very little difference between the sexes, except females are duller in color.

Both are around the same size too, weighing a maximum of 4g and with a 50mm wingspan.

Unusually for Hummingbirds, the Black-Chinned Hummingbird is quite happy in a variety of different habitats. It will set up home in woodlands, mixed forests, and even parks.

Wherever there are plenty of tall trees to shelter in and flowering vines to feed from, it’s quite happy!

In terms of diet, the Black-Chinned Hummingbird feeds mostly on flower nectar. It also eats small insects such as spiders and ants, and will happily visit Hummingbird feeders filled with sugar water nectar.

The Black-Chinned Hummingbird is most commonly spotted in Arizona across the summer months.

During the winter, it heads further South to the warmer temperatures of Mexico before returning to Arizona the following summer.

Measuring just 3.5-inches in length and with an average wingspan of 4-inches, the Calliope Hummingbird is one of the smallest species on this list.

It is also commonly confused with the Broad-Tailed Hummingbird due to its markings, but its smaller size is how you can tell them apart.

Along with its tiny size, the Calliope Hummingbird can be identified by its iridescent dark green back and head, black tail, and light gray underparts.

Despite its small size, the Calliope Hummingbird has a huge amount of stamina and migrates over 4800 miles every year.

Their journey takes them from their winter home of Mexico, through most of the United States, and up to Canada. Some, however, choose to cut their journey short by staying in Arizona for the summer.

The best place to spot a Calliope Hummingbird is in Arizona’s evergreen forests. Here, they build their nests and feed on flower nectar as well as tiny insects they find on plants and trees.

You can also attract the Calliope Hummingbird into your garden by filling Hummingbird Feeders with sugar water.

The Anna’s Hummingbird is about the same size as the Calliope Hummingbird, measuring 4-inches long and with 4.5-inch wingspan.

Males and females are different in appearance, with the male Anna’s Hummingbird being the more colorful of the two sexes. Males can be identified by its bright pink throat and patch either side of the head, gray upperparts, and green upperparts.

Females are much duller in color and do not have any pink throat markings, although some do have a red patch on their head.

The best place to find an Anna’s Hummingbird is along Arizona’s Southeastern Coast, and they are particularly abundant here during the winter months.

They aren’t particularly fussy about habitat, however, and can even be found in gardens and parks with vining flowers to feed from.

One remarkable fact about the Anna’s Hummingbird is that the male puts on an elaborate mating display during the breeding season.

This involves him soaring into the air, sometimes as high as 150 feet up, and then diving head first towards the ground.

During this display, their wings and tail feathers produce a bursting noise which is thought to attract the female.

The White-Eared Hummingbird is named for the white stripes that run vertically from the tip of its eye down to its throat.

This is certainly its clearest identifying feature, but it can also be identified by the bronze-green iridescent feathers that covers its upperparts, head, and throat as well as its black face and long, red bill.

You’re most likely to post a White-Eared Hummingbird in oak forests or in coniferous forests at high elevations.

Here, hovers around trumpet-shaped blooms and uses its long bill and tongue to lap up the nectar hidden within.

It is also skilled at catching small insects in mid-flight and has been known to visit Hummingbird feeders stocked with sugar water nectar.

While resident in Arizona all year round, the White-Eared Hummingbird very rarely breeds in the State.

Instead it chooses the warmer temperatures of Mexico and, here, it sites its nest up to 20 feet above the ground in a tree or shrub.

This nest is constructed from pine needles, moss, and grass and expertly woven together with spider silk. The outside is also camouflaged using moss and lichen, blending in perfectly with its surroundings.

Another Hummingbird named after its most prominent feature, the Violet-Crowned Hummingbird has a violet crown that contrasts beautifully with the dark gray and green feathers that cover its head, neck, and the rest of its upper.

The breast is a pale gray color and it also sports a bright red bill. Females are duller in color than the male, but they are both the same size.

This means that they are quite a common sight throughout Arizona, particularly in the Southwest and in the Madrean Sky Islands. Here, they live in the lower parts of a canyon or in the safety of tall trees.

They can be attracted to gardens with an offer of sugar nectar, but rarely stray from their arid desert homes.

This species of Hummingbird is also solitary and, aside from the breeding season, spends the majority of its year alone.

The male doesn’t contribute to raising the chicks either. This is done solely by the female, who also builds the nest she raises them in.

The Broad-Billed Hummingbird is one of the most colorful Hummingbird species you’ll find in Arizona.

It can be identified by its iridescent green feathers, bright red bill, and royal blue throat that extends down to the breast.

There isn’t much of a difference in appearance between males and females, however, the female is duller in color. Both are around the same size, measuring a tiny 3.5-inches on average.

Their preferred habitat is canyon streams in arid areas. This landscape provides the Broad-Billed Hummingbird with everything it needs to survive, including flower nectar and insects to feed on.

They also build their nests in these areas, choosing a place close to the ground and no higher than two feet high.

The best time to spot a Broad-Billed Hummingbird in Arizona is between March and September.

This is because they visit the State for the breeding season. They spend the remainder of the year in Mexico.

Often mistaken for the Calliope Hummingbird. The Broad-Tailed Hummingbird can be identified by its bright green upperparts, pink throat, pale brown wings, and white breast.

Females are quite similar to males in appearance, although they sport green markings on the throat rather than pink.

Both sexes are the same size, measuring around 3.5-inches long and with an average wingspan of 5-inches.

The Broad-Tailed Hummingbird makes its home in oak forests and evergreen forests at higher elevations, although it has also been found in meadows.

In each of these habitats, it feeds exclusively on nectar and can be attracted to your backyard with an offering of sugar water.

You can also increase your chances of enticing the Broad-Tailed Hummingbird into your garden by planting native-flowering plants.

Despite its small size, this species of Hummingbird can consume almost twice its own body weight in nectar every day, so it will venture far and wide in search of food!

Each of the species of Hummingbird we’ve listed above can be spotted in Arizona as long as you’re looking in the right place!

However, some can also be attracted to your garden with a simple offering of sugar water nectar.

So, if you’ve spotted a small, colorful bird hovering around your Hummingbird feeders recently but aren’t sure what it is, be sure to open this list!