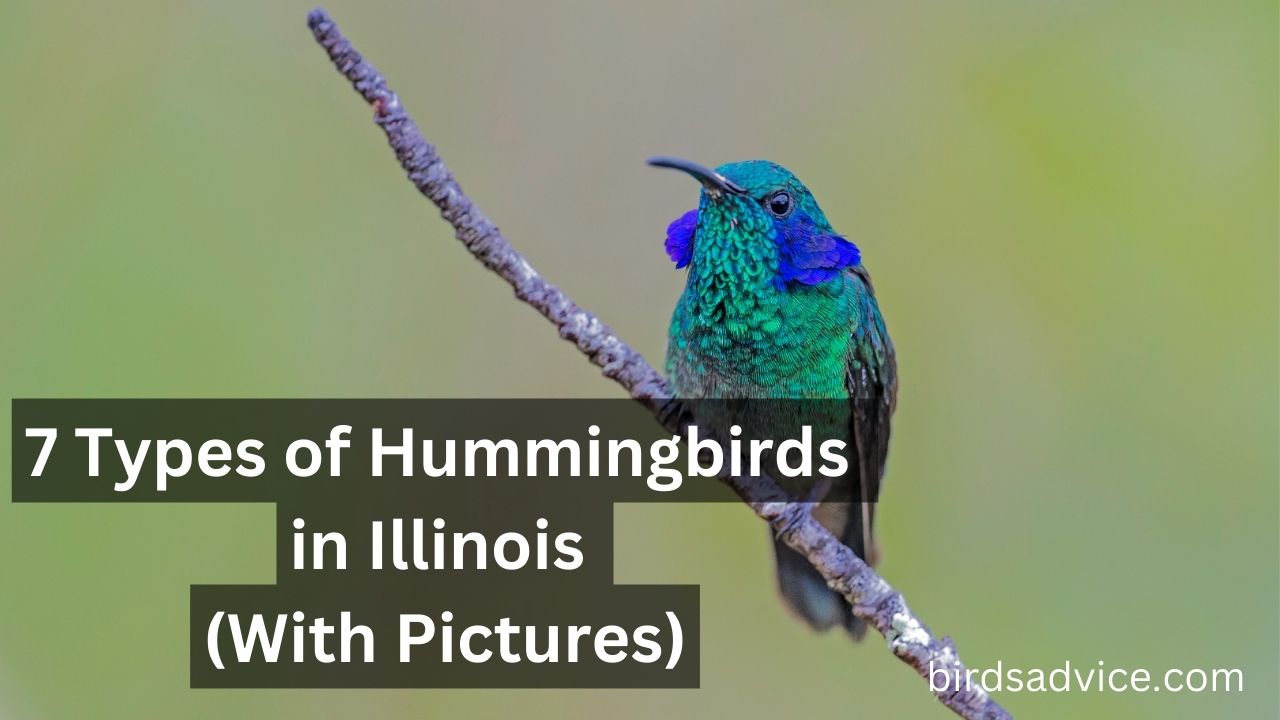 Believe it or not, Illinois is home to one of the most diverse ecosystems in all of North America. And, with this, comes some incredible wildlife including the beautiful Hummingbird.

You might think that Hummingbirds are only found in lush rainforests or desert areas, but it’s not true – they can be found quite easily in the State of Illinois.

Below, we’re going to take a closer look at 7 types of Hummingbirds you can spot in Illinois.

We’ll look at their markings, their diets, talk about how you can attract them to your own backyard and, while none of them are year-round residents in Illinois, we’ll explore some of the places you’re most likely to find them while they’re visiting.

Short on time and want to know what species of Hummingbird you can find in Illinois? Here’s a quick-view list of all 7:

Now, let’s dive in and take a deeper look at these beautiful little birds!

You’re more likely to hear an Anna’s Hummingbird before you see one as, despite its minute size of just 4-inches, it is known for being remarkably noisy!

The noise it produces is a loud, buzzing sound that sounds like a bee (only much louder) and it produces this by flapping its wings at an incredible speed.

It also has a loud, frequent song.

The Anna’s Hummingbird can be identified by the iridescent green feathers that cover most of its body.

Males also have a bright pink throat, while females have a gray throat that is dotted with red markings.

As a non-resident, the best time of year to spot an Anna’s Hummingbird in Illinois is during spring and summer while they visit the state to feed.

Their diet mainly consists of flower nectar, although they will also eat small insects and spiders. You can also attract the Anna’s Hummingbird to your garden with an offering of sugar water nectar.

The Anna’s Hummingbird has quite a varied habitat and will happily set up its home in meadows, mountainous slopes, coastal scrubs, groves, and even in gardens.

During the breeding season, the male Anna’s Hummingbird puts on an elaborate display of affection, climbing as high as 100 feet into the air and then diving headfirst toward the ground, creating a loud buzzing sound with its wings in the process.

This is thought to attract the female and, the louder the noise, the better his chances are of attracting a mate.

Despite not being as showy as the other Hummingbirds on this list, there’s no denying that the Black-Chinned Hummingbird is one of Illinois most beautiful summer visiting birds.

There isn’t that much of a difference between males and females in appearance, although females do not have the purple throat.

Both sexes are around the same size, measuring a tiny 3.5-inches on average.

The Black-Chinned Hummingbird is one of the rarer species you’ll find in Illinois, and this is mainly due to their chosen habitats.

These include semi-arid areas, groves, and dense woodland at low elevations near streams.

They also don’t spend very long in the State, and have just a fleeting summer visit before heading South to Mexico for the winter.

Like most other Hummingbirds, the Black-Chinned Hummingbird’s diet mainly consists of flower nectar and insects.

You can try to attract them into your garden with an offering of sugar water, however, due to their chosen habitats it’s quite rare to see one in your backyard.

Often mistaken for the Allen’s Hummingbird, the Rufous Hummingbird can be identified by its brown plumage that is marked with white dots.

The male Rufous Hummingbird also sports a rust-orange throat, while the female has an iridescent green back.

Both sexes are the same size, measuring around 4-inches in length.

The Rufous Hummingbird is one of the most commonly spotted species of Hummingbird in Illinois although, sadly, its population has declined in recent years due to habitat loss.

This includes its preferred habitat of forest edges and meadows.

In these areas, the female Rufous Hummingbird will construct a nest about 15 feet off the ground in the safety of a deciduous tree.

She uses a mixture of liches, grass, and moss to make this nest and expertly weaves it together with spider silk.

The Rufous Hummingbird’s diet is typical of most Hummingbird species and consists of flower nectar, small insects, and small spiders.

Since it is so commonly spotted, attracting the Rufous Hummingbird into your garden is quite easy.

All you need to do is fill a Hummingbird feeder with sugar water nectar and it shouldn’t take long for one to visit your backyard.

Although it is rarely spotted in Illinois and very much considered an “accidental species” in the State, the Broad-Billed Hummingbird can occasionally be spotted in the summer months.

Come late summer, they’ll head to warmer States including California and Arizona, and some will also migrate further South to Mexico.

The Broad-Billed Hummingbird can be identified by its bright, iridescent upper parts that contrasts beautifully with its long, red beak.

Males also have a royal blue throat patch, while females have pale gray underparts. Both sexes are the same size, measuring around 4-inches on average.

If you would like to try and find this rare Hummingbird, the best place to look would be in woodlands, canyons, and desert areas near a source of water.

The Broad-Billed Hummingbird also nests in these areas in its California and Arizona breeding ground, building a nest about 6 feet from the ground.

This nest is made from soft plant material and grass, and held together with spider silk.

One interesting fact about the Broad-Billed Hummingbird is that, despite their small size, they are quite territorial.

They have no issues defending their territory when needed and have been known to chase away much larger birds.

They also perch high up in their territory to keep an eye out for potential intruders.

The Mexican Violetear is one of the most colorful species of Hummingbirds you can find in Illinois, visiting the State during the summer months.

It doesn’t visit the State every year, however, and has been known to venture as far North as Canada from its native Mexico in search of a warm climate with plenty of food on offer.

You can identify the Mexican Violetear by its shimmering turquoise feathers that cover the majority of its body.

It also has a purple patch underneath each eye and a bright blue breast patch.

Males and females are almost identical in appearance and measure the same as well, growing no larger than 5-inches long.

The best place to try and spot a Mexican Violetear is in forest edges and tropics at high altitudes.

This means that, unless you live at a very high altitude yourself, it’s quite difficult to attract this bird into your garden.

It’s not impossible, however, and by filling a Hummingbird feeder with sugar water nectar you can increase your chances.

There are no prizes for guessing where the Ruby-Throated Hummingbird takes its name from.

The male sports a ruby-red throat patch along with bright green upper parts and white underparts. The female Ruby-Throated Hummingbird has the same colors, but lacks the namesake red throat.

Instead, she has a brown crown. Both sexes are the same size though, measuring around 4-inches in length.

The Ruby-Throated Hummingbird is quite a common sight in Illinois throughout the summer and it can be found in a variety of habitats.

These include forest edges, meadows, parks, and gardens. Essentially, anywhere with an abundance of flowers to feed from is where the Ruby-Throated Hummingbird is happiest!

It’s also one of the widest-ranging Hummingbirds and, during the spring and summer, has been recorded from Canada to Central America.

It does, however, prefer to live in Eastern States.

The Ruby-Throated Hummingbird’s diet consists primarily of flower nectar, although it will also eat insects.

It doesn’t have any issues visiting gardens as well, particularly if sugar water nectar is on offer or if there is plenty of insect-attracting native planting.

A sufferer of the Napoleon complex, the Ruby-Throated Hummingbird is highly territorial and seemingly unaware of its small size when it comes to defending itself.

They are particularly territorial around food sources, chasing off much larger birds and mammals in a bid to protect their bounty.

The Rufous Hummingbird’s doppelganger, the Allen’s Hummingbird can be identified by its bright orange throat, copper upper parts, and pale orange underparts.

Males and females are quite similar in appearance, although the female does not have the iridescent orange throat.

Both are around the same size though, measuring a tiny 3.5-inches in length.

Although this species of Hummingbird can be found all along the Pacific Coast during the summer, it is considered as an “accidental visitor” to Illinois and only visits the State when it needs to.

It is most likely drawn in by Illinois’ mountains and brushy canyons but, as habitat loss and change is more frequent, it is present here less and less.

Like most other Hummingbirds, the Allen’s Humminbird’s diet consists mainly of flower nectar, small insects, and spiders.

It also feeds on insects in quite a different way to other Hummingbird species and, rather than snatching them up from the stems or leaves of a plant, steals freshly caught bugs from a spider’s web.

There you have it – all 7 species of Hummingbirds that you can find in Illinois.

Before you go in search of these, it is worth remembering that none of these Hummingbirds is a year-round resident in Illinois, and can only be found in the State for a fleeting moment during the summer.

It’s worth seeking them out during the warmer months though, especially if you’re a bird watching enthusiast.

And, even if you’re not, their beautiful colors are certainly worth seeing with your own eyes.