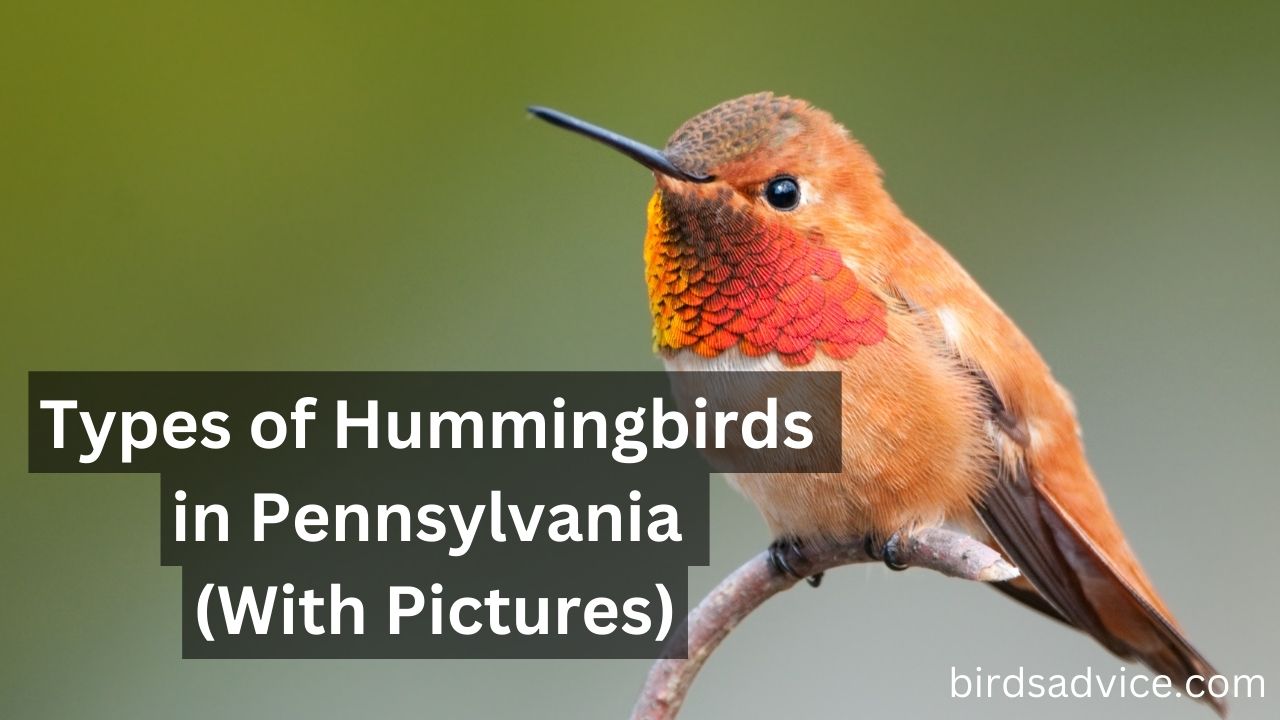 When you think about Hummingbird, you likely picture tropical rainforests full of lush growth and plenty of cover.

But, did you know that Hummingbirds can be found all over North America, with some turning up in States that you would never imagine you’d find them in.

Today, we’re going to take a look at 5 types of Hummingbirds that you can spot in Pennsylvania.

That’s right; despite the freezing winters that Pennsylvania is famous for, the spring and summer temperatures mixed with available habitats make this State the ideal home for some species of Hummingbird.

Here, you’ll discover each of Pennsylvania’s Hummingbirds’ identifying features, where you can find them, how to attract them to your garden, and more.

Looking for a super quick answer to what types of Hummingbirds you can spot in Pennsylvania? Here’s the full list:

Now, let’s take a look at each of these beautiful little birds in more detail.

The Calliope Hummingbird is the smallest bird you’ll spot in the United States, measuring just 3-inches long and weighing 1/10th of an ounce.

Males can be identified by their iridescent green plumage that covers the head and upperparts, white-gray underparts, and a glimmering purple throat.

Females aren’t as showy and do not have the same throat, although they do have touches of pale orange on their underparts.

The best place to spot a Calliope Hummingbird is in mountainous areas and meadows, and they are particularly abundant in areas close to a source of water.

Here, they feed on nectar from tubular-shaped flowers as well as small insects and spiders.

A common theme for Hummingbirds, the Calliope Hummingbird doesn’t let its tiny size get in the way of defending its territory.

They have been known to chase birds much larger than themselves away from their chosen roosting spots.

It will, however, exercise caution when it comes to choosing a feeding area, giving way to larger Hummingbird species when needed.

It’s easy to see where the Ruby-Throated Hummingbird gets its name from.

The male sports a beautiful, ruby-red patch across the throat that contrasts magnificently with the green feathers that cover the rest of its body. It also has a white patch just underneath the throat.

Females do not have their namesake ruby throat and, instead, have a gray-white throat.

All other colors are the same between sexes, and they are the same size as well, measuring around 3.5-inches long.

The best time of year to spot a Ruby-Throated Hummingbird in Pennsylvania is in April and May.

During these months, hundreds migrate into the State to feed on wild columbine, which starts blooming at this time of year.

The Ruby-Throated Hummingbird is also the most commonly spotted Hummingbird species in Pennsylvania, and remains present in the State until late summer.

Once fall rolls around, it begins its long migration South to Central America and Mexico.

One of the reasons why the Ruby-Throated Hummingbird is so commonly spotted is due to its mixed habitat.

It is quite happy setting up home in a variety of places including meadows, deciduous forests, tree groves, parks, and gardens.

In all of these areas, it feeds on flower nectar and insects, with the latter making up almost 60% of their diet.

One of Pennsylvania’s most colorful Hummingbird species, the Allen’s Hummingbird can be identified by its iridescent, bright orange throat, orange face, orange breast, and green feathers that cover the rest of its body.

It also sports a white patch at the top of the breast and has a long, black beak. Colors and markings aren’t that different between sexes, although female Allen’s Hummingbirds are generally duller and have green throat markings.

Native to the Coast of California and Mexico, the Allen’s Hummingbird travels to Pennsylvania during the spring and summer months in search of food.

Its diet consists mainly of flower nectar, although it has also been known to feed on small insects and spiders, as these help to top up their protein levels.

The best place to spot an Allen’s Hummingbird is scrublands or coastal forests, where there are plenty of flowers and insects for them to feed on.

The male is most abundant in open-air territories, while female Allen’s Hummingbirds seem to prefer living in the cover of trees.

Despite their chosen habitats, it’s surprisingly easy to attract the Allen’s Hummingbird into your garden.

This is because, like most Hummingbirds, they are driven by the promise of food!

A Hummingbird feeder filled with sugar water nectar should be enough to entice them in, but you can increase your chances by planting sage, gooseberry, manzanita, twinflower, and other nectar-producing plants in your backyard.

While the Black-Chinned Hummingbird may not be nearly as showy as some of Pennsylvania’s other Hummingbird species, it still has some beautiful markings.

The first of these is its namesake black throat feathers that are interspersed with hints of iridescent purple.

The rest of its body is covered with black and white feathers, and it measures around 3.5-inches in length.

A lack of beautiful markings and a patchwork of colored feathers doesn’t mean that this Hummingbird isn’t remarkable, though.

In fact, the Black-Chinned Hummingbird is one of the hardiest species out there.

Not only are they capable of living in arid areas, they can go without nectar in their diet for a really long time as long as there are plenty of insects to snack on.

Their hardiness also gives them the ability to live in urban areas where there is a distinct lack of flowers to feed from.

They do have a preference for living near a source of water or in the cover of tall trees, but they’ve been known to roost in urban gardens as well, making them one of the easiest Hummingbirds to spot in Pennsylvania.

It’s also quite easy to attract the Black-Chinned Hummingbird into your garden.

A Hummingbird feeder filled with sugar water nectar is almost guaranteed to draw them in, and you can increase your chances by planting native trees and shrubs that, in turn, will attract insects.

These include sycamore, oak, and cottonwood.

Often mistaken for the Allen’s Hummingbird, the Rufous Hummingbird can be identified by its bright orange throat, along with its rust orange head, wings, and underparts.

These markings are only present on males, however, and the female Rufous Hummingbird has green feathers across the majority of her body along with a rust-red throat.

Both sexes are around the same size, measuring 3–inches long and topping the scales at less than an ounce in weight.

The best place to spot a Rufous Hummingbird in Pennsylvania is high in the canopy of coniferous or deciduous forests.

They will venture further afield in search of food, however, and can also be spotted darting around parks, gardens, and backyards.

When it comes to breeding season, the female Rufous Hummingbird is solely responsible for creating the nest.

This is typically constructed using leaf litter, moss, grass, and pine needles and is placed as high as 30 feet in the safety of a tree.

She’ll also choose a spot with overhanging branches, as this offers protection from both predators and the elements.

Like most Hummingbirds, the Rufous Hummingbird’s diet mainly consists of flower nectar, and they have a particular liking for larkspurs, penstemons, heaths, and lilies.

So, if you want to entice this beautiful little bird into your garden, be sure to include these in your planting schemes.

They’ll also eat smaller insects including flies and gnats, and are particularly skilled at snatching them out of the air in mid flight.

Another thing that the Rufous Hummingbird has in common with many other Hummingbird species is that it is fiercely territorial.

There have been multiple accounts of the Rufous Hummingbird chasing birds and small mammals away from their nests, and they’ve even been known to attack other Hummingbirds as a way of intimidating them.

This isn’t specific to their long-term territory either, as they’ll even protect an area they are stopping in briefly during migration.

There you have it – all five species of Hummingbird that you can find in Pennsylvania.

The best time of year to spot each of these is during spring and summer, and they are particularly busy at either end of the season as they start searching for food to take them through the long flight home.

Most can also be attracted to your backyard quite easily as long as you’re providing food and shelter in the form of Hummingbird feeders and native planting.

We hope this list has been helpful. Whether you’re in your backyard or out in nature, next time you see a tiny Hummingbird hovering in front of a flower for a quick meal, be sure to pull up this list – you may have just spotted something you’ve never seen before!