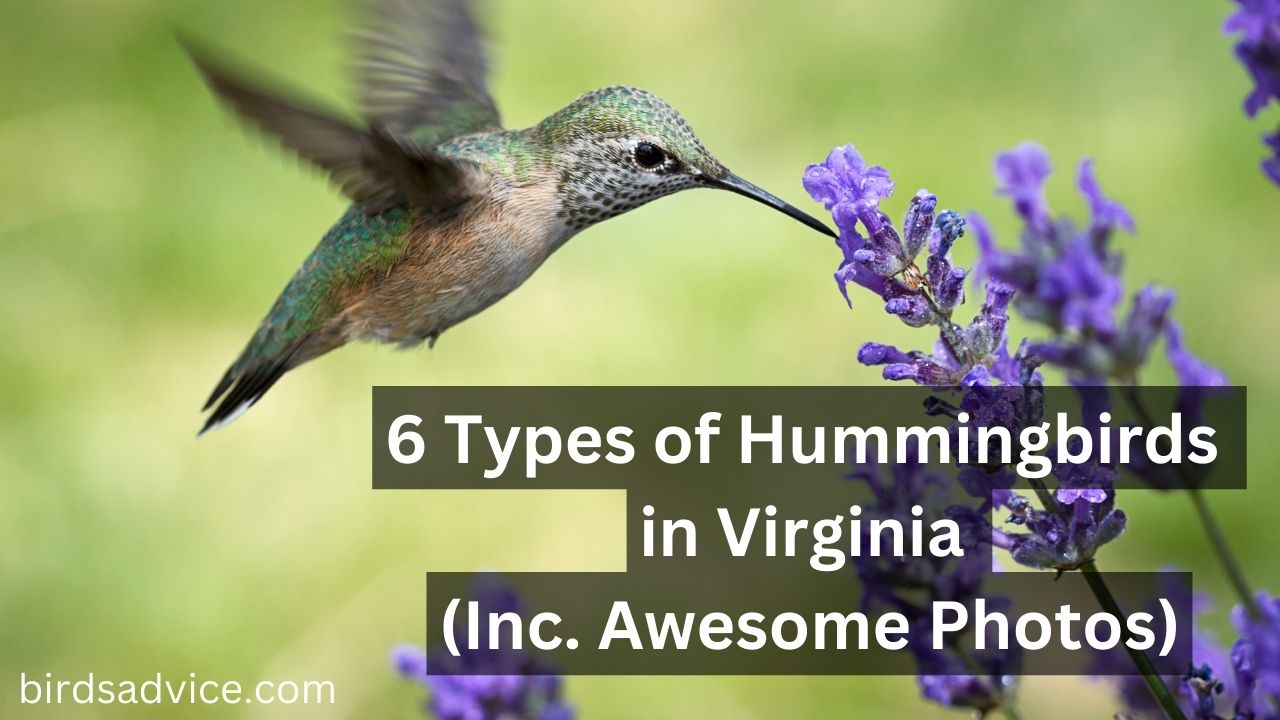 Virginia is a State steeped in history and is often referred to as “the birthplace of a nation” due to the fact it is the first place that English settlers resided.

It’s also famous for its beautiful cemeteries, architectural runners, and stunning trails. But, did you know that Virginia is also a fantastic place to see some incredible wildlife.

And, of all of the wildlife Virginia has to offer, it’s the Hummingbird that reigns supreme as the most beautiful of all.

That’s right, while you may think that Hummingbirds are only ever found in rainforests or areas with high temperatures and humidity, there are actually 6 types of Hummingbirds you can spot in Virginia.

We’re going to look at each of these Hummingbirds in more detail below. We’ll explore their habitats, diets, and, most importantly, look at their identifying features.

If you’re short on time and want to know what 6 species of Hummingbird you can find in Virginia, here they all are in a quick-reference list:

If you want to learn more about each of these beautiful Hummingbirds, keep reading as we take you through their markings, habitats, diets, and more!

One of the world’s smallest Hummingbirds, the Black-Chinned Hummingbird measures a tiny 3-inches long and tops the scales at 4 grams.

Like most birds, there are marked differences between the males and females.

The best time of year to spot a Black-Chinned Hummingbird in Virginia is during the spring and summer.

They can be found living in a variety of habitats including lowland deserts, mountainous forests, and even backyards. Here, they rest in flowering shrubs and dead tree branches, as well as dense vines.

The Black-Chinned Hummingbird feeds on flower nectar, which makes up the majority of its diet. It will also eat small spiders and insects though, hovering in front of a plant and picking each insect off with expert skill.

You can also attract the Black-Chinned Hummingbird to your garden by filling your Hummingbird feeders with sugar water nectar.

One interesting fact about the Black-Chinned Hummingbird is that, despite its small size, it’s one of the fastest birds on earth.

It can reach speeds of up to 30 miles per hour and, when diving, they can get up to 60 mph! It’s also a very long-lived bird, with some reaching 10 years of age.

The Allen’s Hummingbird can be identified by its rust-red throat and iridescent dark green cap and upperparts.

It also sports a white throat that is dotted with yellow markings and white underparts.

Males and females are quite similar in appearance, although the female has more green feathers across her back. Both sexes are the same size, measuring around 3.5-inches long.

Just like the Black-Chinned Hummingbird, the Allen’s Hummingbird can be found in a wide variety of habitats.

These include mountainous forests, mixed woodland, meadows, parks, and gardens.

Put simply, wherever there is an abundance of flowers for them to feed from, the Allen’s Hummingbird is happy!

Flower nectar makes up the largest part of the Allen’s Hummingbirds diet and they can visit as many as 1000 flowers per day in search of sweet nectar.

The best place to spot an Allen’s Hummingbird in Virginia is during the spring and summer.

While they don’t breed in the State, it is one of the best places to find a reliable food source at this time of year. As soon as fall rolls around, the Allen’s Hummingbird heads further South to Mexico for the winter.

Another tiny bird, the Selasphorus Hummingbird measures around 3.5-inches long and weighs no more than 0.13 ounces.

Males can be identified by their red throat, orange upperparts, and underparts.

Females look quite different from males, and sport green feathers along with rust-red markings across their underparts and tail.

During the spring and summer months, you can find the Selasphorus Hummingbird in forests, meadows, orchards, and parks.

Some have also been found in backyards, and can be attracted into the garden by offering sugar water nectar in a Hummingbird feeder.

Like most Hummingbirds, flower nectar makes up the largest part of the Selasphorus Hummingbird’s diet, although they do also feed on small insects and spiders.

They are particularly active during the breeding season as they need to eat around half of their body weight in food every day!

Come fall the Selasphorus Hummingbird takes to the sky and heads South towards Mexico for the winter.

It will return to Virginia the following year and, more often than not, try to reclaim last year’s territory, doing so with some attack.

In fact, despite their small size, the Selasphorus Hummingbird is one of the most territorial Hummingbird species, and they have been known to attack other birds much bigger than them in a bid to secure their territory.

The Ruby-Throated Hummingbird can be identified by its bright-green back and crown, gray underparts, and their namesake ruby-colored throat.

Another tiny species, this little bird measures just 3-inches long and with an average wingspan of 3.5-inches.

Like many of Virginia’s Hummingbird species, the Ruby-Throated Hummingbird isn’t overly particular about its habitat.

It has been spotted living in forested areas, mixed woodland, meadows, parks, grasslands, and backyards.

Food is their main motivator so, as long as there is an abundance of flowers for them to feed from, the Ruby-Throated Hummingbird will happily set up home!

As well as flower nectar, the Ruby-Throated Hummingbird feeds on small insects including gnats, aphids, flies, and spiders.

You can attract this beautiful little bird into your garden by planting native trees and shrubs that will attract these insects and offer the Ruby-Throated Hummingbird a place to shelter.

They will also visit gardens with Hummingbird feeders that are stocked with sugar water nectar.

Like most other species of Hummingbird, the Ruby-Throated Hummingbird doesn’t let its small size stand in the way of its power!

It can beat its wings at a remarkable rate of 53 times per second, creating a buzzing sound at the same time.

So, next time you hear a loud buzz when you’re in your local park but can’t place it, you might just be hearing the fast-beating wings of a Ruby-Throated Hummingbird!

The males and female Anna’s Hummingbird are around the same size but are quite different in appearance!

A common theme in the bird world, the male Anna’s Hummingbird has far more colorful plumage than the female. He can be identified by his bright pink throat and matching patch either side of the head.

Males also have gray upperparts, and green upperparts. The female Anna’s Hummingbird, however, does not possess any pink throat markings and is overall duller in color.

Spotting an Anna’s Hummingbird in Virginia is actually quite easy, as they live in a variety of different habitats.

These include streamside groves, open woodlands, mountain slopes, parks, and gardens. They’re also resident in Virginia all year round, making them even easier to spot.

However, once late summer rolls around, most will move to higher elevations such as mountain meadows.

Another fast-moving bird, the Anna’s Hummingbird is capable of beating its wings and an incredible speed of 50 times per second.

It can also fly at speeds up to 40mph, and is especially fast when diving.

Another interesting fact about the Anna’s Hummingbird is that it puts on an elaborate mating display during the breeding season.

This involves the male soaring as high as 150 feet into the air and then diving towards the ground. During this display, their wings and tail feathers produce a bursting noise which is thought to attract the female.

The last entry on our list of Hummingbirds you can find in Virginia is the Calliope Hummingbird.

This bird is absolutely tiny, measuring no more than the size of a ping-pong ball. In fact, it is the smallest recorded bird in the United States.

You can identify the male Calliope Hummingbird by the magenta-red patch it sports on its throat, along with its dark tail, white underparts, and a dark green back.

Female Calliope Hummingbirds don’t have the red throat-patch, however, their underside is more of a pale-red color than the male.

Non-resident in Virginia, The Calliope Hummingbird’s migration season starts quite early in the year, with some traveling along the Pacific Coast as early as mid-April.

Some may even venture further North to Canada, arriving around May.

The majority of this tiny bird’s diet is made up of flower nectar, although they have been known to feed on insects and spiders.

They are particularly adept at catching flies on the wing, snatching them out of the air with expert precision.

They also have an incredible ability of licking flower nectar from deep inside a bud at a speed of 15 times per second with their long, specially-evolved tongues.

The Calliope Hummingbird is resourceful too, and will often reuse last year’s nest or build on top of an older one in an evergreen tree.

It doesn’t take the chicks very long to fly the nest either, and they’ll be ready to take on the world by themselves in just 20 days. They can also mate and have a brood of their own at the age of one.

As you can see, Virginia has 6 beautiful Hummingbird species that can be seen throughout the year.

Some, such as the Anna’s Hummingbird can be found all year round, making them one of the easiest to spot and definitely one for any avid birdwatcher’s list!

Others you may have to search slightly further afield for, although all of the species above can be attracted to backyards with an offering of sugar water nectar.

In fact, it’s always worth having this on offer anyway, as you may just attract a beautiful Hummingbird that you’ve never seen before.