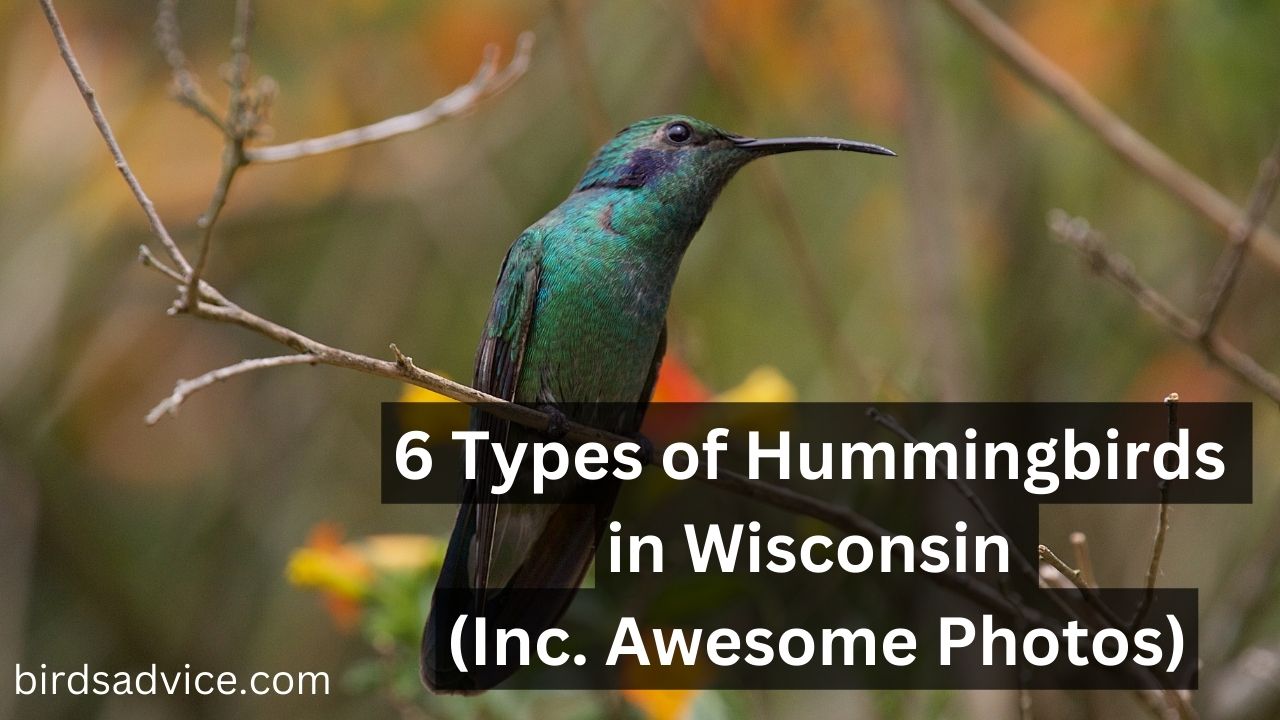 Whether you’re a Wisconsin resident or you’re visiting the State on a bird watching field trip, you may be surprised to learn that there are quite a few species of Hummingbirds for you to discover.

That’s right – these beautiful, exotic-looking birds aren’t just found in rainforests and remote jungles. You can find them right in your own backyard.

Below, we’re going to take a look at 6 types of Hummingbird that you can find in Wisconsin. We’ll look at their identifying features, explore their natural habitat, and talk about how you can attract them into your garden.

By the time you’re done reading, you’ll know everything there is to know about Wisconsin’s Hummingbird species.

If you’re short on time and want to know what species of Hummingbird you can spot in Wisconsin, here’s all six of them in a quick-view list:

If you want to learn more about each of these beautiful Hummingbirds, keep reading as we take you through their colors, markings, habitats, diets, and more!

Let’s kick things off by taking a look at the Broad-Billed Hummingbird.

This species is one Wisconsin’s rarest Hummingbirds, although it can be spotted during the summer as it visits the State for the breeding season.

It also breeds in other Southwestern States and Mexico, the latter of which it can be found all year round.

You’ll know immediately if you’ve seen a Broad-Billed Hummingbird as it is one of the most colorful Hummingbird species you’ll ever see.

It can be identified by its iridescent green feathers, bright red bill, and royal blue throat that extends down to the breast.

Male and females are very similar in appearance, however, the female is duller in color. Both are around the same size, measuring just 3.5-inches on average.

They also build their nests in these areas, choosing a place close to the ground and placing it no more than two feet high.

In fact, it’s listed as one the States second-most commonly spotted Hummingbird species.

The Rufous Hummingbird can be identified by the rust-red feathers that it sports on the tail and upper parts.

Male Rufous Hummingbirds also have a green patch on their heads, but the females do not. Both sexes are the same size though, each measuring a tiny 3-inches long.

As you might expect from such a commonly-spotted bird, the Rufous Hummingbird can be found in a variety of habitats. These include forests, woodlands, parks, and gardens.

Their diet is typical of most species of Hummingbird, consisting mainly of flower nectar as well as small spiders and insects.

Depending on the temperature, the Rufous Hummingbird may remain present in Wisconsin all year round.

However, if things start getting really cold, they’ll head further South and spend the winter in Mexico.

The Ruby-Throated Hummingbird can be found all across Wisconsin, although they are particularly abundant in the South and East of the State.

They can be identified by their bright-green back and crown, gray underparts, and their namesake red-colored throat.

This is als one of the smallest Hummingbirds in the world, measuring just 3-inches long and with an average wingspan of 3.5-inches.

Interestingly, the Ruby-Throated Hummingbird is the only Hummingbird species that nest in Wisconsin.

While they are migratory and some will travel South to Mexico for the winter, many stay in Wisconsin and other easter United States as long as temperatures don’t drop too low.

This beautiful little bird feeds on both nectar and insects, and part of the reason it does so well in Wisconsin is because it isn’t shy when it comes to visiting backyard Hummingbird feeders.

It’s a bit of an assassin when it comes to catching flying insects as well, and can easily snatch them out of the air on the wing using its sharp bill.

Often mistaken for  the Rufous Hummingbird, the Allen’s Hummingbird can be identified by its iridescent rust-red throat, orange underparts, matching eye patches, and tail.

The rest of its body is covered in light green feathers. Female Allen’s Hummingbirds have all of the same coloring as the male, however, they do not have the bright orange throat and are generally duller in color.

One of the earliest birds to migrate to Wisconsin, the Allen’s Hummingbird can be spotted throughout the spring and summer months.

Their preferred habitat is a shady forest or mixed woodland near a source of water, such as a lake or stream.

In this environment, they construct a nest out of soft leaf material and weave it together expertly using spider silk

As soon as late summer and fall arrive, the Allen’s Hummingbird begins its long journey back South to warmer temperatures, usually spending the winter months in Mexico.

Some can be found all year round in Los Angeles, but you’ll only ever find them in Wisconsin from April to September.

Another of Wisconsin’s rarest Hummingbird species, the Green Violetear Hummingbird can be identified by its white throat, iridescent green back, and name sake violet-blue ears.

As summer visitors to Wisconsin, the best time to try and spot this elusive little bird is during the spring and summer months.

Come fall, they’ll take to the skies and head South to Northern Mexico.

While the Green Violetear Hummingbird is one of the hardest to find, you may hear one without being able to see it.

This is because they have a fast, erratic flight pattern that produces a buzzing sound that isn’t dissimilar to the sound of a large bee.

It produces this sound by moving its wings at a rapid pace while it hovers in mid air.

Like most species of Hummingbird, the Green Violetear Hummingbird’s diet consists of flower nectar, small insects, and spiders.

It’s quite unusual to find this rare Hummingbird species in your garden, but you can try to entice them by filling your Hummingbird feeders with sugar water nectar.

Likewise, planting vining plants that attract insects may also encourage them to visit your backyard.

The Anna’s Hummingbird measures around 4-inches long and has an average wingspan of 4.5-inches.

Males and females are the same size but are quite different in appearance, with the male Anna’s Hummingbird sporting more colorful plumage than the female.

The male Anna’s Hummingbird is most easily identified by its bright pink throat and matching patch either side of the head. He also has gray upperparts, and green upperparts.

Females, on the other hand, are much duller in color and do not have any pink throat markings. Some do have a red patch on their head, though.

This tiny bird isn’t particularly fussy about its habitat and can even be found living quite happily in mixed woodland, coniferous forest, parks, and gardens.

Essentially, anywhere with vining flowers to feed from is where the Anna’s Hummingbird is happiest!

One interesting fact about the Anna’s Hummingbird is that  it has an elaborate mating ritual.

During the breeding season, the male will soar as high as 150 feet into the air and then dive head first towards the ground.

During this display, their wings and tail feathers produce a bursting noise which is thought to attract the female.

Want to learn even more about Wisconsin’s Hummingbirds? Here are some incredible facts about these beautiful little birds.

While Wisconsin may not have as many different species of Hummingbirds as some other States, there are still plenty of beautiful Hummingbirds you can find here.

Some you won’t have to look too hard for and can easily be enticed into your garden with a promise of some sweet sugar nectar to feed on.

Others, on the other hand, are much rarer and you’ll have to take a special field trip to find.

It’s absolutely worth it though, as seeing one of these colorful little birds in the wild really is any avid bird watcher’s dream!