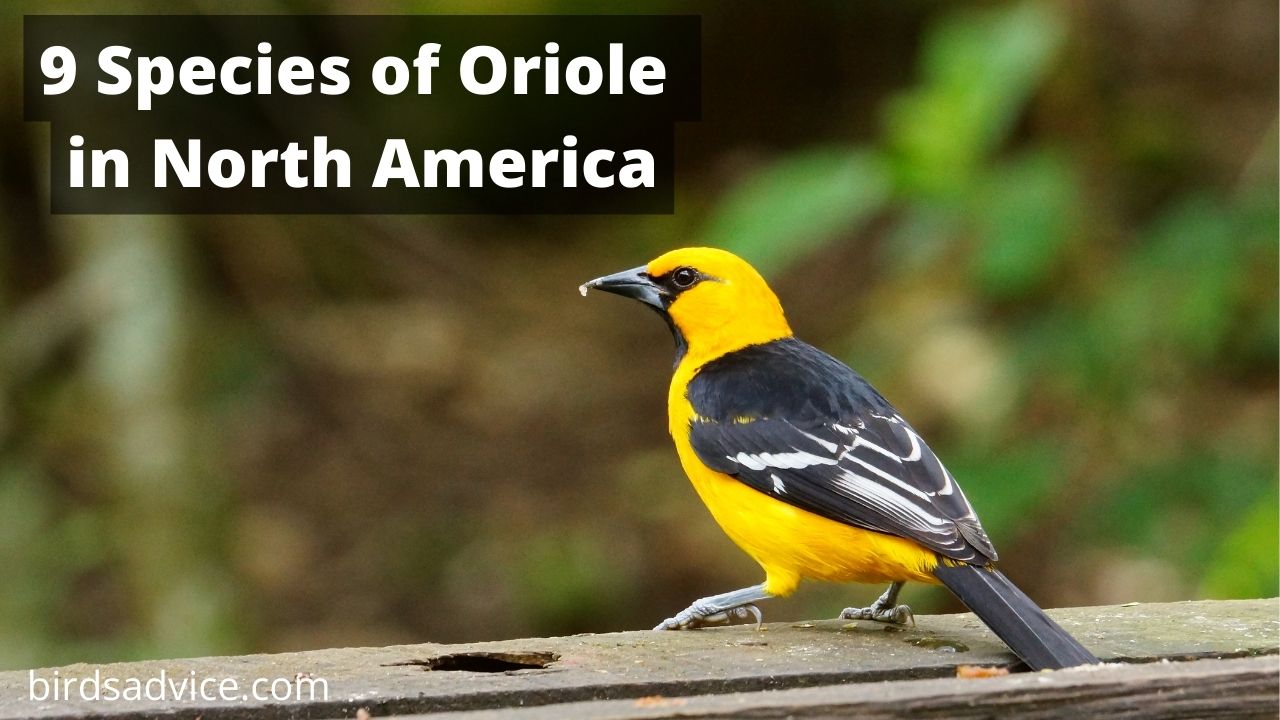 One of the most colorful species of bird, the Oriole is a spring and summer visitor that can be found across most of North America.

But, as with almost every other species of bird, they come in so many different shapes, colors, and sizes, that it can be difficult to know exactly what you’ve spotted!

If you think you’ve seen an Oriole flitting around in your backyard or local park and would like to know its name, you’ve come to the right place.

Below, we’ll take you through 9 species of Oriole in North America. We’ll look at each of their identifying characteristics, nesting habits, diet, and more.

The first Oriole species on our list is the Orchard Oriole. As with most birds, males and females have different markings.

The female Orchard Oriole is covered with green-yellow feathers, has pale underparts, and slightly darker wings with white bars.

Male Orchard Orioles, on the other hand, has a jet black head and back along with rust-orange underparts.

They are also smaller than females, averaging around 6-inches long compared to the female’s 7-inch length. Both sexes have an average wingspan of around 10-inches.

Native to Central America and Mexico, the Orchard Oriole heads North during the spring and summer and can be found in Eastern and Central States where it chooses to breed.

Its preferred habitat is open woodland although they have also been spotted in parks and gardens.

Not particularly fussy eaters, the Orchard Oriole’s diet consists of insects, fruits, seeds, and nectar. You can also attract them to your garden by planting native fruiting bushes such as chokeberries and mulberries.

One of the most striking birds you’ll ever see, the Altamira Oriole has a bright yellow cap, breast, and underparts.

It also has a black tail and black wings that are marked with white. Its face is black as well, and it has a very sharp, black bill.

This coloring might lead you to believe that spotting an Altamira Oriole is easy.

However, they are actually one of the rarest birds in North America and can only be found in Texas’ Rio Grande-Valley, where they live all year round.

If you do manage to spot one of these magnificent birds, there’s a very good chance that another is close by as they live in pairs.

They also build huge, hanging nests in open woodland that can be as big as 2 ft long.

Another vibrantly-colored bird, the male Bullock’s Oriole has a bright orange face, breast, and underparts while its wings are black and white. It also has a black cap and a horizontal black eye stripe.

Females are much duller in color and have a yellow breast, tail, and head along with a gray back.

Fairweather visitors to North America, the Bullock’s Oriole is only present in this part of the world during the spring and summer months.

For the remainder of the year, it heads South to spend its winter in Mexico.

You’re most likely to spot a Bullock’s Oriole in open woodlands or parks, and a telltale sign of their presence is their intricate nests that are made of wool, grass, and hair and formed in a gourd-like shape.

It’s not too difficult to encourage a Bullock’s Oriole into your garden as long as you have some fruit on your bird table.

They also have a particular fondness for grape jelly, so if you really want to draw them in make sure you include some of this in your offerings!

With bright yellow underparts, black breasts, head, and white-barred black wings, the Scott’s Oriole is another of this bird species’ most striking family members.

Females are a paler yellow color and, rather than black, have olive-green backs and heads.

A medium-sized bird measuring around 9-inches in length, the Scott’s Oriole heads to North America to breed in the Southwestern US States. It is also resident all year round in Baja California and Southern Mexico.

The Scott’s Oriole’s preferred habitat is deserts and scrublands, and here they will build nests no higher than 7 feet from the ground.

These nests are typically made from grass, yucca leaf, and cactus fibers.

They also have a peculiar feeding habit. Exclusively insectivorous, the Scott’s Oriole will happily feed on the Monarch Butterfly, which is poisonous to most other birds.

Often confused with Bullock’s Oriole, the male Baltimore Oriole has a bright orange breast along with a black head and black wings that are streaked with white.

Females do not have these orange markings and sport pale yellow feathers instead.

They also have gray-brown plumage across the rest of their body, rather than the jet-black feathers that the male has.

The Baltimore Oriole spends the breeding season in Central and Eastern US States along with some parts of Southern Canada.

Here, they can be found in various habitats including forest edges, woodlands, and riverbanks where they construct hanging nests.

Come fall, they’ll head to the warmer climates of Central America, Florida, and the Caribbean.

They don’t spend long hanging around before they start migrating either, leaving as early as July in some cases.

The Baltimore Oriole’s diet primarily consists of insects including grasshoppers, beetles, and crickets. They won’t turn down other foods though, and will happily peck away at fruits and seeds.

One really popular way of attracting this colorful little bird into your garden is by leaving halved oranges on your bird table – a fruit they cannot resist!

The Hooded Oriole takes its name from the bright orange feathers that extend from its neck right across the top of its head, and down to the base of its bill, giving it the appearance of wearing a hood.

These orange feathers can also be found on the breast and underparts, while its back, wings, and face are jet black.

Hooded Orioles spend the breeding season in the Southern US States, constructing hanging nests on the underside of palm frogs in dry, open areas.

They build their nests high up as well, often suspending them from 20-ft high.

Come fall, the Hooded Oriole heads further South and winters in Mexico, although some do remain in Central America and the Gulf Coast all year round.

If the weather is particularly warm, some may even stay in their breeding grounds as long as food supplies remain plentiful.

In terms of food, the Hooded Oriole’s preferred diet is fruit and nectar. They can often be found hanging from nectar feeders, so be sure to keep these regularly filled if you’d like to attract this bird to your garden.

You can also increase your chances of drawing the Hooded Oriole into your backyard by planting fruiting trees and shrubs.

There are no prizes for guessing where this Oriole species gets its name from! The Spot-Breasted Oriole has black spots all over its orange breast along with orange underparts, legs, and cap. It also has a black bib and wings with orange wing bars.

These beautiful birds aren’t very common in the United States and most sightings are in Florida and along the Gulf Coast.

They do, however, remain in residence all year round in Central America, Mexico, and along the Pacific coast.

If you want to try and find a Spot-Breasted Oriole, your best bet is to look in open woodlands.

They have also been known to visit backyards when food in their preferred habitat becomes scarce, and you have a much better chance of drawing them in with an offering of nectar and fruit.

Like all members of the Oriole family, the Audubon Oriole sports brightly-colored feathers across most of its body. It has yellow underparts and a yellow back, along with a black head and black wings that are barred with white.

It also has a long, black tail. One thing that does set them apart from most other Orioles, however, is that both males and females are very similar in appearance.

Non-migratory birds, Audubon’s Oriole covers quite a small range from Mexico to Southeastern Texas. Here, it lives in thickets and wooded areas, taking cover in dense vegetation or high up in the trees.

This, along with their 7-inch length, can make them quite difficult to spot. However, they can be enticed into your garden with an offering of nectar or sunflower seeds.

Rounding off our list is the Streak-Backed Oriole. As you may have guessed from its name, this bird has black streaks that contrast beautifully with its bright orange back.

It also has black and white streaked wings, along with orange underparts, an orange head, and a black patch just underneath the bill.

As is the case with a few other members of the Oriole family, the Streak-Backed Oriole is one of the rarer species in the United States.

It is most commonly found in the Southwestern States, and it remains resident all year round in Central America and Mexico.

Its preferred habitat is grassland or tropical woodland, however, it has been known to venture into well-planted gardens that have plenty of food on offer.

There you have it – 9 species of Oriole that you can find in North America. Some of these are much more common than others, but their rarity and beauty are absolutely worth taking a trek for.

For the most part, however, Orioles are easy to attract to your garden as long as you’re providing them with the right food – their particular favorites being fruit and nectar.

Include these in your offerings and you’re almost guaranteed to draw these beautiful birds into your backyard.