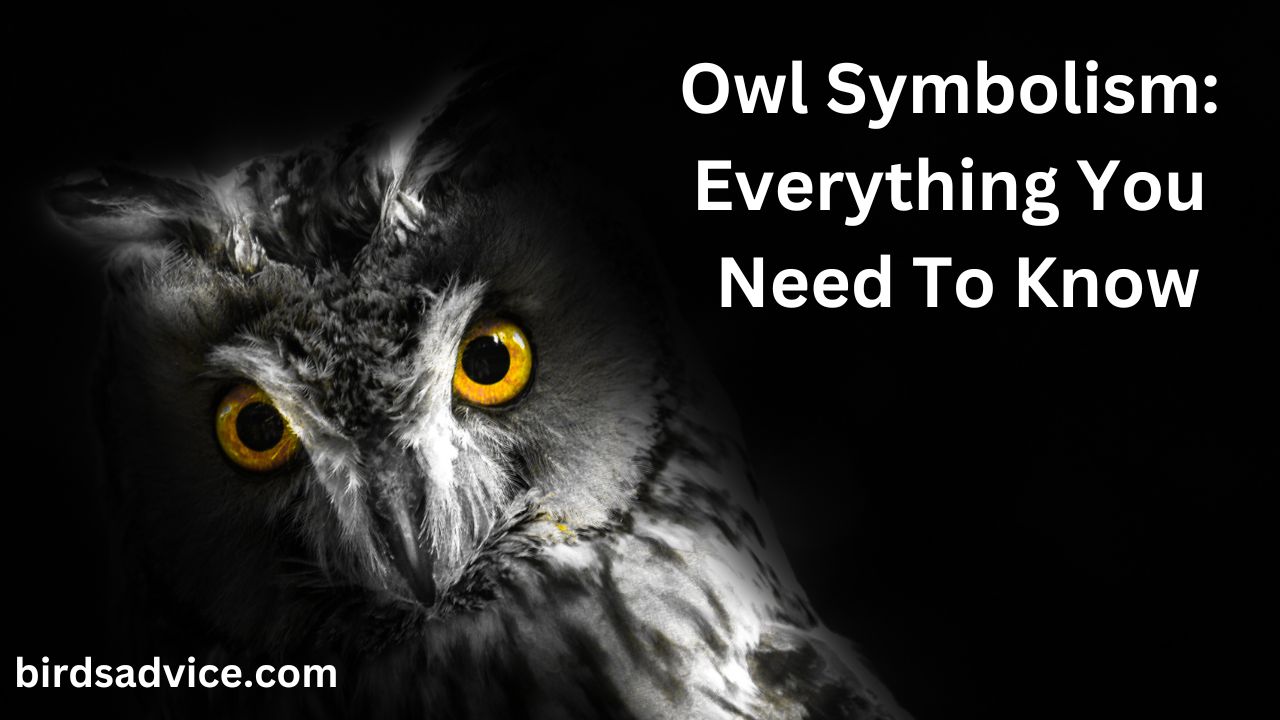 In many cultures and traditions, the owl is seen as a symbol of wisdom, knowledge, and perspective.

Owls are often associated with magic and the occult, as well as with death and the afterlife.

They are also seen as symbols of the feminine and are associated with the moon and the night.

Whether you’ve seen an owl recently or dreamt of one, you might want to know exactly what your sighting of this iconic, mysterious creature means destiny has in store for you.

That’s what we’ll discuss here. We’ll explore the mythology surrounding owls, the spiritual meaning behind them, along with their spirit animal, totem animal, power animal symbolism, and so much more.

What It Means If You’ve Seen An Owl

It is not uncommon for people to see owls in the wild, especially if they are in an area where owls live. If you have seen an owl, it could be a sign that the owl is present in your area.

In many cultures, owls are considered to be symbols of wisdom, knowledge, and mystery, and seeing an owl can be seen as a good omen.

Some people believe that seeing an owl is a sign of good luck, while others view it as a sign of spiritual guidance or a message from the spiritual world.

What Does It Mean If You Hear An Owl?

Hearing an owl can be a powerful and meaningful experience, and it can be interpreted in a number of different ways depending on the context and the culture in which it occurs.

Some people believe that hearing an owl is a sign of good luck or good fortune, while others see it as a symbol of change or transformation.

In many Native American cultures, the owl is seen as a messenger of the spirit world, and hearing an owl is thought to be a sign that the spirits are trying to communicate with you.

There are also many superstitions and folklore surrounding the meaning of hearing an owl.

For example, some people believe that hearing an owl hoot three times in a row is a sign of death, while others see it as a sign of danger or impending trouble.

In general, however, hearing an owl is often seen as a sign of spiritual communication or guidance, and it can be a powerful and meaningful experience for those who are open to receiving its message.

Owls have a rich mythology and have been revered in many cultures throughout history. In Greek mythology, the owl was a symbol of wisdom and was associated with the goddess Athena, who was the goddess of wisdom, war, and crafts.

The Romans also saw the owl as a symbol of wisdom and used the image of the owl on their coins.

In Native American mythology, the owl is often seen as a messenger from the spirit world and is associated with magic and the supernatural.

In many cultures, the owl is seen as a symbol of death and is thought to be a messenger of the spirits of the dead.

In Japanese culture, the owl is seen as a symbol of good luck and is associated with the deity Inari, who is the patron of fertility, agriculture, and prosperity.

Confusingly, however, it can also be associated with death in Japanese culture.

In Hindu mythology, the owl is associated with the goddess Lakshmi, who is the goddess of wealth and prosperity.

So, as you can see, while owls have frequently been associated with mythology, their symbolism can vary quite dramatically depending on culture.

Owls are often seen as symbols of wisdom, knowledge, and insight. In many cultures, they are also associated with mystery and magic.

Some people believe that seeing an owl can be a sign of good luck or a message from the spirit world.

Owls are also sometimes seen as protectors or guides, especially in the dark.

In some traditions, owls are thought to be able to see into the future or to have special powers of perception.

Whether or not you believe in the spiritual significance of owls, it is clear that these birds have long been considered symbols of the unknown and the mysterious.

Cultures And Religions With A Positive Spiritual Meaning Of Owls

Does seeing an owl also mean good things are to come? Here are a few examples of cultures and religions that associate owls with positive spiritual meanings:

In many Native American cultures, owls are seen as powerful spirit animals that can help people access higher levels of wisdom and knowledge.

Some tribes believe that owls can help people see through illusion and deception, and that they can also bring messages from the spirit world.

In Ancient Greek culture, owls were associated with the goddess Athena, who was the goddess of wisdom and war.

Athena was often depicted with an owl perched on her shoulder, and owls were seen as symbols of intelligence and knowledge.

In Hinduism, the goddess of learning, Saraswati, is sometimes depicted with an owl as her vehicle (vahana).

This suggests that owls are seen as symbols of knowledge and education in Hindu culture.

In the modern spiritual tradition of Wicca, owls are often seen as symbols of wisdom and knowledge, as well as death and transformation.

Some Wiccans believe that owls can help people access hidden knowledge and understand the mysteries of life.

Cultures And Religions With A Negative Spiritual Meaning Of Owls

All seems pretty good so far, right? But could seeing an owl mean anything bad is on the horizon? Here are a few examples of cultures and religions that associate owls with negative spiritual meanings:

In Judaism, Christianity, and Islam, owls are often seen as symbols of death or misfortune.

In the Bible, for example, owls are mentioned as birds of ill omen, and in Islamic tradition, they are associated with sorcery and the jinn (demons).

In Ancient Roman culture, owls were seen as symbols of wisdom. However, they were also seen as a symbol of bad luck and were often associated with death.

In Japanese culture, owls are sometimes seen as symbols of bad luck and are associated with death and the spirit world.

However, they can also be seen as a symbol of good luck – it all depends on the context in which you’ve seen the owl.

The owl is often seen as a spirit animal, representing wisdom, insight, and the ability to see what is hidden.

Owls are known for their ability to see in the dark, which can symbolize the ability to see through the darkness of ignorance or difficult situations.

Owls are also often associated with silence and stealth, which can represent the ability to move through life with stealth and grace.

Some people believe that the owl spirit animal can appear to guide and protect them on their journey through life, helping them to see through deception and find their way to the truth.

Others believe that the owl spirit animal can help them to access their own inner wisdom and find their own path in life.

In general, the owl spirit animal is seen as a symbol of intelligence, insight, and the ability to see the bigger picture.

It is often associated with the ability to see through illusion and to find meaning in the hidden or mysterious aspects of life.

The owl is a powerful and mysterious bird that is often seen as a symbol of wisdom, knowledge, and insight.

In many cultures, the owl is seen as a totem animal, which means that it is believed to have a special spiritual significance for a person or group.

The meaning of the owl as a totem animal can vary depending on the culture and context, but some common themes include:

Owls are often seen as symbols of wisdom and knowledge because they are thought to be intelligent and perceptive animals.

They are known for their keen eyesight and ability to see in the dark, which can be interpreted as a metaphor for being able to see through the veil of ignorance and illusion.

Owls are also often associated with insight and intuition because they are thought to have a special connection to the spiritual realm.

In many cultures, the owl is seen as a messenger of the gods or a spirit guide, and it is believed to be able to offer guidance and insight to those who seek it.

The owl’s nocturnal habits and quiet, stealthy movements have made it a symbol of mystery and secrecy in many cultures.

It is often seen as a symbol of hidden knowledge or hidden forces at work in the world.

Owls are known for their ability to adapt to different environments and hunting techniques, which makes them a symbol of adaptability and flexibility.

They are able to thrive in a variety of situations and are able to adapt to changing circumstances with ease.

Overall, the meaning of the owl as a totem animal can be quite varied, but it is typically associated with wisdom, knowledge, insight, intuition, mystery, secrecy, and adaptability.

The Barn Owl is a type of owl that is found in many parts of the world, and it has a number of different symbolic meanings depending on the culture and context.

Like other Owls, the Barn Owl is often seen as a symbol of wisdom and knowledge. Its keen eyesight and ability to see in the dark are often interpreted as metaphors for being able to see through the veil of ignorance and illusion.

In many cultures, the snowy owl is seen as a symbol of power and strength.

The snowy owl is a large, powerful bird that is able to survive in some of the most extreme environments on earth. This has made it a symbol of strength and power in many cultures.

The Screech Owl is well known for its ability to adapt to different environments and hunting techniques. This makes it a symbol of adaptability and flexibility.

It is able to thrive in a variety of situations and is easily able to adapt to changing circumstances and take on new challenges with ease.

As you can see, the symbolism of owls varies quite a bit depending on culture. Some see it as a sign of good luck or as a way of communicating with the spiritual world, while others see them as harbingers of bad luck.

Overall, seeing or hearing an owl is very much open to your own interpretation and your cultural background. Whatever you believe, one thing is for sure – the presence of an owl in your life is certainly a symbol that shouldn’t be taken lightly.