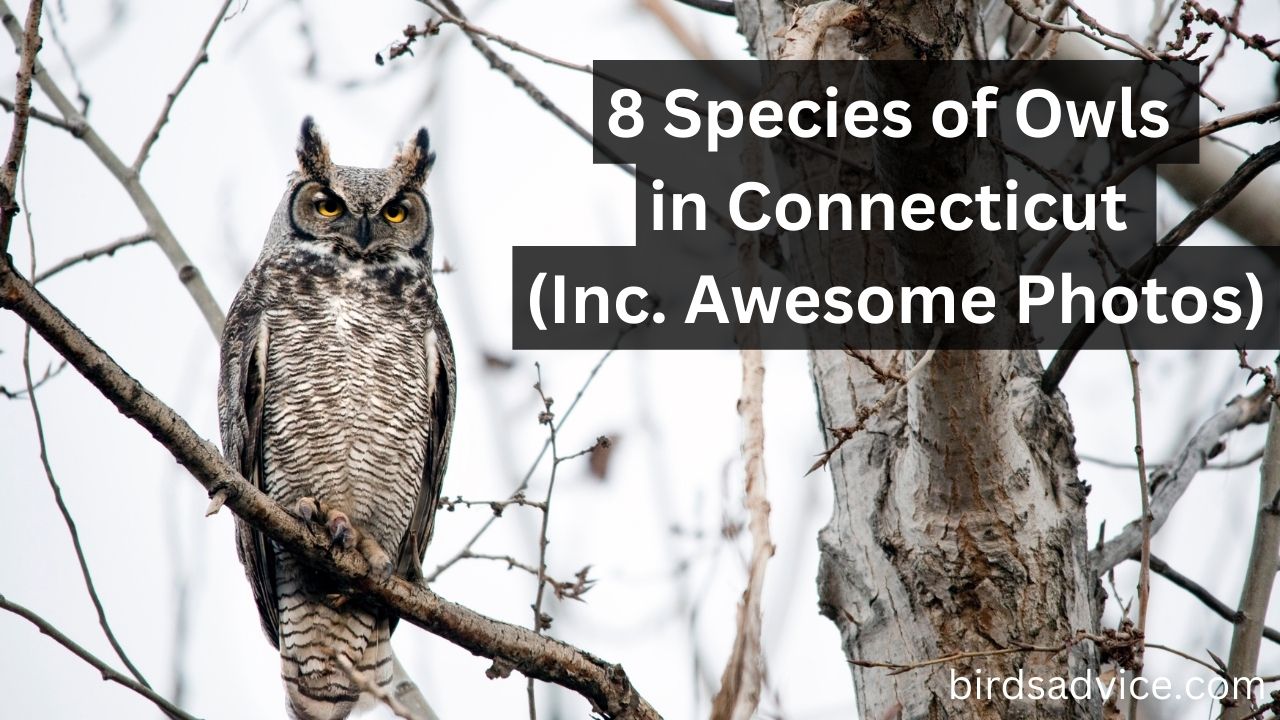 For centuries, Owls have become a symbol of power and wisdom. Not to mention, as a fierce bird of prey, they’re one of the most revered animals in the world.

But, all of 250 species of Owl, how many can you find in Connecticut?

Below, we’ll take a look at 8 species of Owls you can spot soaring through the Connecticut skies. We’ll look at their identifying features, explore their habitat, eating habits, and more.

By the time you’re done reading, you won’t only know what species of Owl you can find in Connecticut – you’ll know everything there is to know about them! Are you ready? Let’s get started!

Simply looking for a quick list of Owls you can find in Connecticut? Here is all 8 species you spot in the State:

Now, let’s take a closer look at each of these magnificent birds of prey.

Named after its distinctive barring that runs vertically across the underparts and horizontally across the back and breast, the Barred Owl is one of Connecticut’s resident Owl species and can be found in the State all year round.

It can also be identified by its rounded tail, black eyes, round head, and lack of ear tufts.

The Barred Owl measures around 18-inches long and has an average wingspan of 40-inches.

The best place to try and spot a Barred Owl in Connecticut is in mature forests.

They prefer a roosting spot near a source of water, such as a river or lake, and nest deep inside tree cavities.

In this nest, the female Barred Owl will lay up to 5 pure white eggs and incubate them for a period of two weeks before the young Owl chicks hatch.

Like most Owls, the Barred Owl’s diet mainly consists of small mammals. These include rabbits, squirrels, and voles.

They have also been known to hunt smaller birds when food sources are scarce, snatching them out of the air with their fierce talons.

The Short-Eared Owl is a winter visitor to Connecticut, choosing to spend the season in the warmer temperatures than its native Canada can offer! Come spring, however, it will return further North for the breeding season.

One of the smaller Owls on our list, the Short-Eared Owl measures around 15-inches long and has an average wingspan of 36-inches.

It can be identified by its small ear tufts, to which it takes its name from, as well as its mottled brown, black, and white feathers.

It also sports a pale face and its yellow eyes are rimmed with jet black.

One thing that sets the Short-Eared Owl apart from most other Owl species is that it does all of its hunting during the day.

They can be spotted from dawn to dusk soaring low over open fields in search of mice, voles, and other small mammals to feed on.

The Short-Eared Owl also differs from most other Owl species by choosing to nest on the ground.

Using their sharp claws, the female Short-Eared Owl will scrape a bowl shape into the ground before lining it with a soft material, such as feathers and grass.

Once ready, she’ll lay as many as 11 eggs and spend the next two weeks incubating them.

One of North America’s most common Owl species, the Great Horned Owl can be spotted in Connecticut all year round.

It’s easy to see where this magnificent Owl got its name, with its large ear tufts creating a horned effect on the top of its head.

The Great Horned Owl can also be identified by its mottled gray-brown feathers and the white patch on the front of the front.

In terms of size, the Great Horned Owl measures around 22-inches long and has an average wingspan of 50-inches. It also has a deep, hooting call and broad, rounded wings.

The Great Horned Owl’s success across North America is partly due to its unfussiness when it comes to habitat.

This Owl is happy living in a variety of places including grasslands, forests, deserts, and even in cities. As long as there is plenty of prey to hunt, it’s perfectly content.

They nest in each of these areas as well, and will often reuse an older nest created by another owl.

After a few homely touches, such as lining with leaves and feathers, the female Great Horned Owl will lay up to 4 eggs and incubate them for two weeks until the chicks are ready to hatch.

Remarkable hunters, the Great Horned Owl’s diet consists of both mammals and birds.

They’ve been known to take down prey much larger than themselves too, and have even been recorded hunting other birds of prey such as falcons, ospreys, and other owl species. They’ll eat carrion, too!

The Barn Owl is arguably one of the most recognizable species of Owl in the world.

However, despite being a permanent resident in Connecticut, it’s very rarely spotted in the State.

If you have seen one, you’ll know instantly from its pure white, round face, white breast and underparts, and mottled gray and brown upperparts.

It also has a heart-shaped face disk, measures around 14-inches long, and has an average wingspan of 44-inches.

There isn’t a lot of difference in appearance between male and female Barn Owls, however, the female has a slightly spotted chest.

Interestingly, the more chest spots the female has, the more her partnered male helps her construct her nest!

This nest is often placed in a tree cavity or cave, but most are built inside outbuildings and barns, hence the name “Barn Owl”.

Another interesting fact about the Barn Owl is that it has the best hearing of any animal in the world.

It owes this to its concave, heart-shaped face disk that acts as an amplifier. This doesn’t only help them sense oncoming danger before it arrives, but also allows them to catch their prey from high in the air with expert precision.

It can even hear a small mammal scurrying around deep underground or hidden by snow.

Like most Owls, the Barn Owl hunts at night. Its prey consists exclusively of small rodents including mice, rats, and voles.

Once it’s caught its prey, the Barn Owl swallows it whole, then coughs up the bones and fur a little later in something called a “pellet”.

Another of Connecticut’s winter visitors, the Long-Eared Owl heads to the State from Canada and some Northern United States to avoid harsh weather and freezing temperatures.

Come spring, it takes to the skies and heads back North for the breeding season.

Named for the long ear tufts atop its head, the Long-Eared Owl measures around 14.5-inches long and has an average wingspan of 36-inches.

It can also be identified by its barred black and brown feathers, buff-colored round face, and bright yellow eyes.

These colorings help the Long-Eared Owl stay perfectly camouflaged during the day as they rest in their forest homes.

Like most Owls, the Long-Eared Owl preys on small mammals including rats, rabbits, mice, and voles.

They silently soar close to the ground over open grassland, using their incredible hearing to listen out for these creatures in the dead of the night.

As soon as they’ve identified their prey, they swoop with expert level skill and snatch it up with their talons.

The smallest species of Owl on this list, the Northern Saw-Whet Owl can be found in Connecticut all year round.

It measures just 8-inches long and has an average wingspan of 16-inches, making it about the same size as a robin!

This small size isn’t the only identifying feature that the Northern Saw-Whet Owl has, though.

It can also be identified by its large, round head and white face that is almost comically too big for its body.

It sports mottled brown feathers too, and has bright yellow eyes.

Like most Owls, the Northern Saw-Whet Owl is nocturnal and does all of its hunting at nighttime. Its prey consists of small mammals, and they are particularly skilled at hunting for mice and voles.

The best place to spot a Northern Saw-Whet Owl is in their preferred habitat of dense forests.

Here, they nest in tree cavities and, thanks to their small size, they can often be found reusing an old Woodpecker hole.

Fairly lazy nesters, they add no extra material to these abandoned nests and lay their eggs directly on top of whatever remains from the year before!

Most commonly found East of The Rockies, the Eastern Screech Owl is another of Connecticut’s year-round birds of prey.

Relatively small, it measures around 9-inches in length and has an average wingspan of 24-inches.

It can also be identified by its gray and dark red barring which makes them almost impossible to spot against the bark of a tree.

You might be wondering where the Eastern Screech Owl gets its name from. Well, it’s all to do with its call, which is described as a shrill, vibrating trill not unlike that of a “screech”.

The best place to spot an Eastern Screech Owl is in mixed woodlands, although they have also been spotted in large parks where there are plenty of trees to shelter in.

They’ll often take shelter and nest in a tree cavity. Much like the Northern Saw-Whet Owl, the Eastern Screech Owl doesn’t make any extra effort when it comes to nesting, laying its eggs directly on top of an abandoned nest.

Eastern Screech Owls can be seen hunting at dawn and dusk, as well as throughout the night.

They won’t use more energy than they need to when it comes to hunting though, often sitting still and waiting for their prey to pass by them rather than actively seeking it out.

Another instantly recognizable species of Owl, the Snowy Owl visits Connecticut during the winter months but is rarely seen. It doesn’t venture very far into the State either, as its winter range is so wide.

One of the most distinctive looking birds of prey on the planet, the Snowy Owl can be identified by the pure white feathers that cover the majority of its body.

It also has black-brown markings all over, bright yellow eyes, and measures around 25-inches with an average wingspan of 52-inches.

Unlike most other Owls, Snowy Owls are diurnal. This means that they hunt during the day, and they have had to evolve this lifestyle due to the 24 hours of daylight that they are used to in their Arctic summer homes.

The Snowy Owl’s diet consists mainly of lemmings, and they can eat as many as 1600 lemmings in a single year!

They also eat other small mammals such as mice, rats, and voles, as well as other small birds.

Whether you’re a resident of Connecticut or you’re simply visiting, one thing is for certain – there are some amazing Owls for any keen birdwatcher to cross off their list.

Many of these are resident to the State all year round as well, making them even easier to find. However, as most are nocturnal, you’ll have to stay up pretty late and invest in some specialist equipment to spot them!