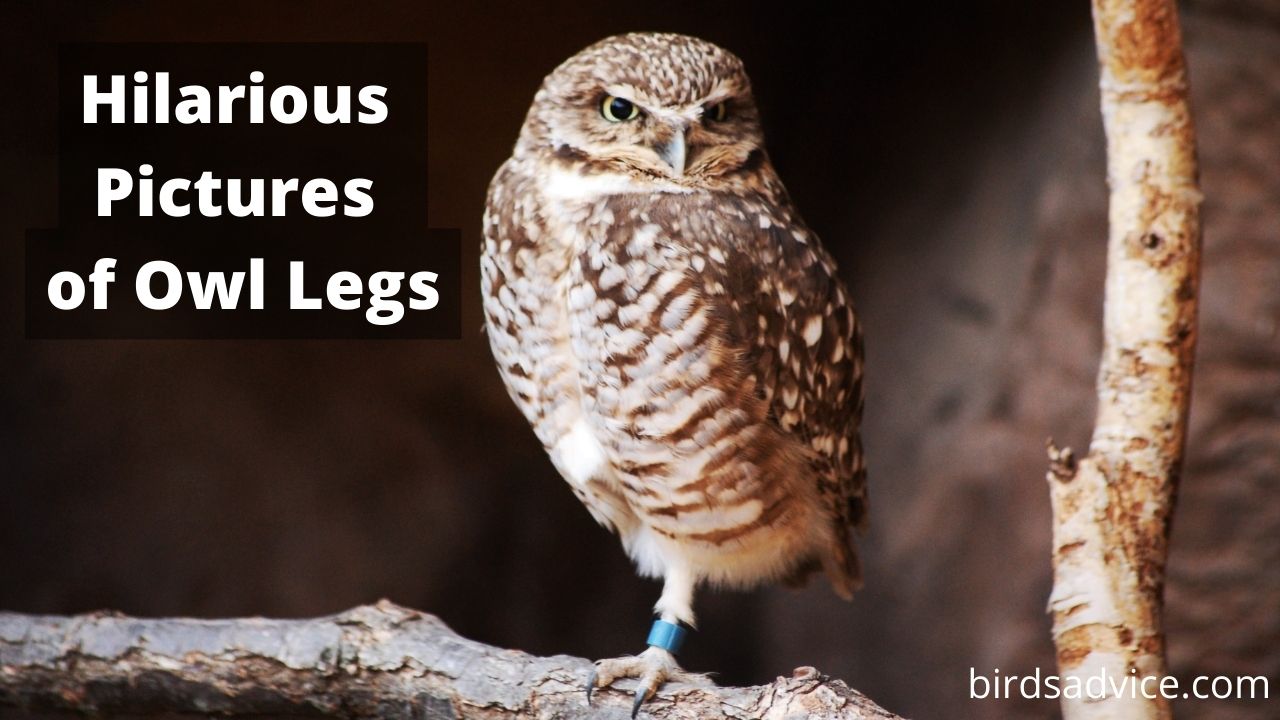 Ask someone to think of an owl, and they’ll usually take one of two routes. One is the fierce, nocturnal predator with incredible night vision and unbelievable hearing.

The other is the mystic bird of fairytale and folklore. One answer you’re quite unlikely to get is “funny.”

But, with pictures hitting the internet recently of owls having their legs exposed from beneath their full-feathered bodies, the word “funny” is now one that can be associated with this bird of prey!

Below, you’ll find lots of hilarious pictures of owl legs for you to enjoy, share with your friends, and save to your phone for those moments when you just need to laugh at something.

Let’s start with this grumpy-looking guy.

Sure he looks as wise as Merlin’s sidekick, Archimedes, but as your eye travels further down his body, you find two spindly, knock-kneed legs that look as though they might belong to an entirely different bird altogether!

Perhaps this owl is sick of flying.

Maybe it’s decided that its true calling is to outshine Kate Moss on the catwalk. And, with such long legs, it might well be able to!

The legs are just one hilarious part of this picture. Take a look at that face.

Have you ever spotted your friend from a distance and not been 100% sure it’s them?

That’s precisely what springs to mind when we look at this little owl craning to see across an open plain.

Those skinny legs look almost too weak to support this great predator as well, just adding to the hilarity of the picture.

Just look at how long those pins are! Skinny, out of proportion to the rest of its body, and genuinely hilarious.

When you think about how short this owl’s body is in proportion to the legs as well, it just gets funnier and funnier!

We move from one extreme to the other with this owl.

His stubby little legs look almost incapable of holding him in place, and those leg feathers take us centuries back to the britches of Elizabethan times.

This owl’s neck ruffles wouldn’t make him seem out of place at a Royal Court either.

Well, they are considered to be one of the wisest creatures after all!

His hilariously skinny legs look as though they’ve been Photoshopped on and should belong to an entirely different species of bird altogether. They are, however, his.

Sure, he might have love heart patterns all over his chest, but he might want to do a few squats or lunges to even out a bit if he wants to attract a potential partner!

Are you a front sleeper or a back sleeper?

Well, we know how this little owl prefers to catch some z’s! Not only does he look as though he’s been very rudely awoken from his nap in the sun – those outstretched legs are one of the funniest things we’ve ever seen.

Maybe he’s topping up his tan. Whatever the case – his stubby little legs are hilarious!

Yes – that is an owl sitting cross-legged on the floor.

We like to think of this guy as a yoga instructor, teaching all the other forest animals how to concentrate on their breathing and stretch.

The legs are just one funny part of this picture, though. Look a little closer, and just underneath his beak, there is what appears to be another tiny owl face.

This is one of those “once you’ve seen, you can’t unsee it” situations that make this owl leg picture funnier!

Are owls fierce? Yes. Are they funny? Absolutely.

Just looking through these pictures should be enough to prove that!

Hopefully, these have brightened your day up a bit, and remember, next time you see an owl, it’s quite literally sitting on a secret – it’s hilarious legs.