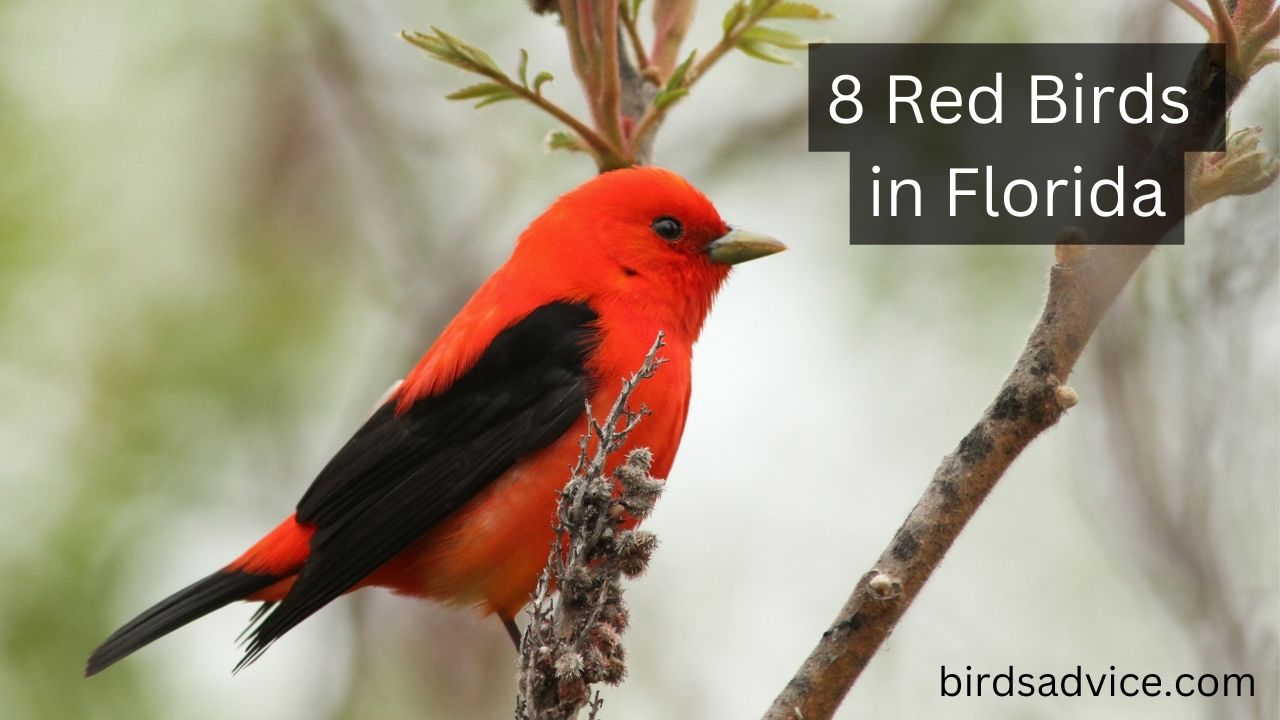 Whether you live in the great State of Florida or you’re simply visiting, there is a wealth of wildlife to be found in Florida’s tropical climate.

And, of all of this wildlife, nothing really compares to the colorful birds that you can spot all over the State.

If you’ve recently spotted a bright red bird in your backyard, local park, or out on a trek and you’d like to identify it, you’ve come to the right place!

Below you’ll find a list of red birds in Florida, along with information on each of their unique colors and markings, their natural habitat, diet, and more.

Let’s start with one of Florida’s most colorful, year-round residents.

The male Painted Bunting sports a patchwork of vibrant feathers all over its body with a bright blue head, red underparts, green wings, and green back.

Females, on the other hand, don’t sport such colorful markings and are covered with yellow-green feathers instead.

Measuring around 5-inches long, the Painted Bunting is a small bird that can be found living in semi-open habitats such as woodland and parks.

Here, it forages for seeds throughout fall and winter, and feeds almost exclusively on insects during the summer.

Attracting Painted Buntings into your garden is fairly easy – you just need to make sure you’re offering the right food.

Their favorites include sunflower seeds and white millet, and you have a greater chance of drawing them in if you have dense vegetation for them to shelter in.

The Common Redpoll is one of the rarer red-colored birds that you can spot in Florida, and only a handful have been spotted in the State over the last 10 years.

Of course, this doesn’t mean that it’s impossible to see one! So, if you’ve seen a bird measuring around 5-inches long with a red head, blush breast, and white and brown plumage across the rest of its body, you may have seen this elusive species!

The reason for their scarcity is that they spend most of their time in the Northern States and, unlike many other birds, they don’t migrate South for the winter.

They have a peculiar habit of tunneling deep into the snow during the winter as well, creating small caverns in which to keep warm during the night.

The Common Redpoll’s preferred habitat is weedy fields with plenty of seeds and catkins for them to feed on.

They are also capable of consuming up to 42% of their body mass in seeds every day, and have even evolved a stretchy pouch in their esophagus that can hold up to 2 grams of seed.

There aren’t many birds that are redder than the Scarlet Tanager. Covered with bright red feathers, the only black markings on this bird are its wings and tail.

Everything else is completely scarlet, hence its name.

While the Scarlet Tanager isn’t a year-round resident to Florida, it can be spotted quite easily during migration from April-May and again between September and October.

Outside of these months, the Scarlet Tanager heads to South America.

Their preferred habitat is mixed forests and woodland where they forage for fruits and seeds to feed on.

They can also be drawn into your garden by planting fruiting bushes including raspberries, blackberries, strawberries, and mulberries.

The Northern Cardinal is one of Florida’s most common red birds and it can be seen in the State all year round.

Males are bright red all over, bar a black face mask and some black markings on the wings and tails. Females are duller in color, sporting brown feathers with some red highlights as well as a red beak.

Northern Cardinals are one of the most territorial bird species in the world, and some have even been seen attacking their own reflections in a bid to defend their territory!

This territorial behavior elevates even higher during the breeding season, and it isn’t uncommon to see two male Northern Cardinals fighting.

This red bird isn’t particularly fussy about where it sets up its home and is happy living in woodland, forest edges, and parks.

They’ll even set up a home in your backyard, especially if their preferred foods are on offer. This includes sunflower seeds, millet, and peanut hearts.

The Summer Tanagers is another of Florida’s year-round residents, although numbers increase during September and April as birds from other parts of North America head to the State for the winter.

The male Summer Tanager can be identified by the bright red feathers that cover its entire body, along with black wing bars.

Females have the same black wing bars but, rather than being red, are covered with bright yellow feathers.

A medium-sized bird, the Summer Tanager is most commonly spotted in its preferred habitat of open woodland.

Here, they catch wasps and bees on the wing to feed on. They also have a unique feeding habit of catching their prey and flying to the nearest branch.

Once there, they will rub the wasp or bee’s stinger against the branch to remove it before eating the insect.

Another of Florida’s year-round residents, the House Finch sports a bright red head, red breast, and white and brown feathers across the rest of its body.

Only males have red breasts but, aside from this, both sexes are very similar in appearance.

The House Finch is a relatively new species to Florida, originally heading to the State from the West of the United States.

It has thrived in this area though and, in some cases, has even pushed the Purple Finch out of its natural habitat.

Part of the reason for the House Finch’s success is that it really isn’t bothered about where it nests.

It is equally happy on farms, forest edges, parks, and backyards. They also live in large flocks, making them fairly easy to spot in these environments.

Like most finches, their preferred food source is seeds and you can attract the House Finch to your garden with an offering of nyjer seeds and sunflower seeds.

As you may have guessed from its name, the Vermillion Flycatcher is an exclusively insectivorous bird.

They hunt on the wing, snatching flies and other flying insects out of the air with expert precision and a specially-evolved sharp, needle-like beak.

They aren’t very common in Florida, but they can be spotted during the winter months as they head to the State to keep warm from October to March.

They can be identified by their bright red cap, breast, and underparts as well as their dark brown wings, upper parts, and neck.

They also have a matching dark brown stripe across each eye.

The last red bird on our list you may find flying around Florida is the Purple Finch. It would be fair to assume, given its name, that this bird isn’t red at all.

However, this isn’t the case. The Purple Finch sports a red-purple head and breast and has brown wings with the same red-purple markings. It also has white underparts.

This bird can be found all year round in Florida, although those that live in other parts of North America choose Canada for their breeding grounds and overwinter in the Eastern States.

Their preferred habitat is evergreen forests, and here there is an abundance of seeds, berries, fruit, and nectar for them to feed on.

You can attract the Purple Finch to your garden by planting any fruiting bush and, as is the case with most other species of Finch, they have a particular appetite for nyjer seeds and sunflower seeds.

From the list above, you can see that there are 8 different red birds that can be spotted flying all over Florida.

Most of these are quite common, but there are the occasional rarer species that you’ll really need to be lucky to spot!

Either way, one thing is for sure – Florida has some of the most beautiful red birds you could ever wish to see.