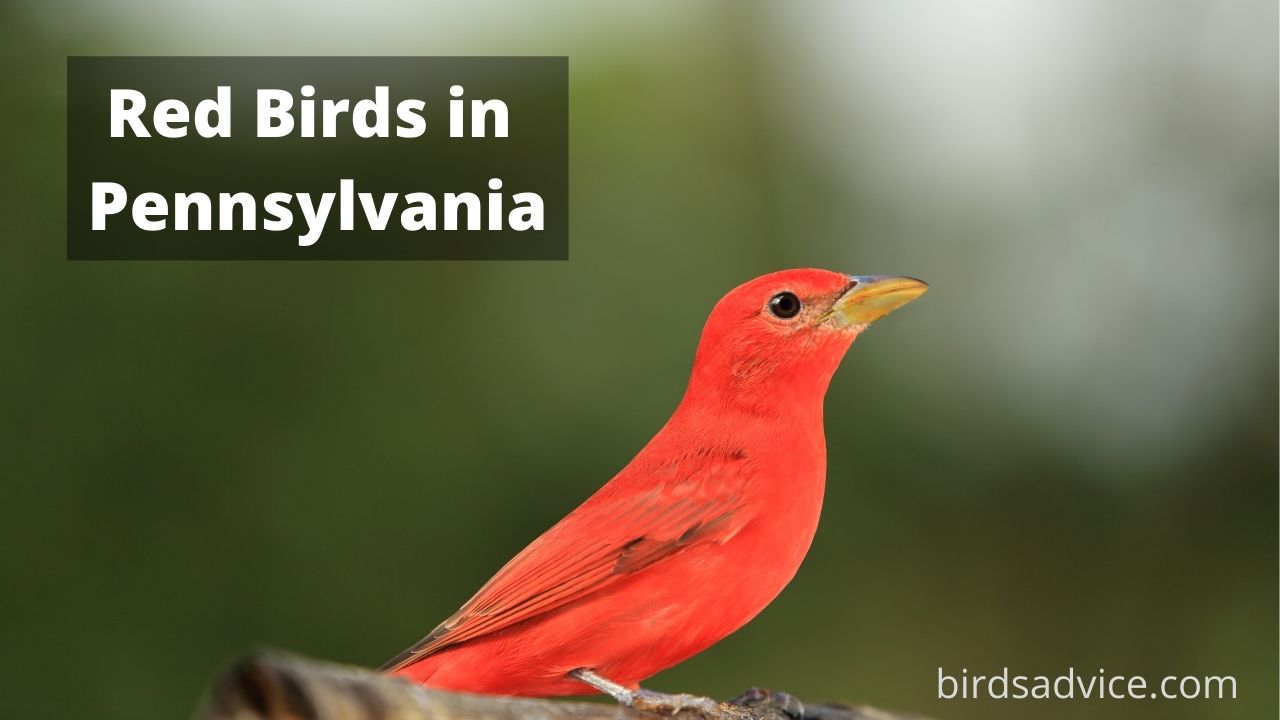 Are you an avid bird watcher living in Pennsylvania and spotted a red bird flitting around their garden?

Or, maybe you’re taking a trip to this beautiful state to see what wildlife there is to be spotted. Whatever your reason for joining us today, one thing is for sure – you’ve come to the right place!

Below, you’ll find a list of 10 red birds that can be found in Pennsylvania. From the famous Northern Cardinal to the lesser-known Summer Tanager, finding and identifying some of Pennsylvania’s red-feathered friends has never been easier.

One of North America’s most famous birds, the Northern Cardinal, is easy to identify.

It has a bright red head, tail, and body. It also sports a black mask that covers an upside-down triangular patch of their face.

Their abundance makes them pretty easy to identify as Red Cardinals are non-migratory birds, meaning they are found in Pennsylvania all year round.

They’re also common across all Southern and Eastern States, where they remain all year round.

Like a lot of little birds, Northern Cardinals are incredibly territorial and won’t hesitate to defend themselves and their territory when needed.

This is particularly true during the breeding season, during which they’ve even been spotted attacking their reflections to defend themselves and their nests.

Attracting Northern Cardinals into your garden is pretty straightforward. They aren’t fussy eaters and will happily visit bird feeders and tables well stocked with millet, sunflower seeds, peanuts, and milo.

They’ll also happily eat from food scattered across the ground.

Although not as common in Pennsylvania as the Northern Cardinal, the White-Winged Crossbill can be spotted living in the State from November through June.

They have a bright red chest, cap, neck, and black and white wings. They also have a beak that crosses over at the tip, where they get their name.

This beak is used to prise apart certain seeds, getting to the good stuff in the middle and leaving the husk an empty shell.

This is a unique evolutionary feature, but it’s not the only one that the White-Winged Crossbill possesses.

It also breeds at any time of the year! As long as there’s enough food to go around, they’ll set up home and start another brood.

As they aren’t that common, it’s unlikely that you’ll spot a White-Winged Crossbill in your garden. But, if you visit a spruce forest, you may find one darting from branch to branch in search of food.

A member of the Finch family, the Pine Grosbeak isn’t native to Pennsylvania but has become a common sight over the last few years.

Most are found in Canada, but a few flocks can be spotted in Pennsylvania, and some have also been recorded in California.

Like a lot of birds, it’s the male of the species that has the most colorful markings.

The male Pine Grosbeak has a red chest, underparts, and cap. The rest of his feathers are brown, with a few white markings on the wings.

The female, on the other hand, is gray and has a dull orange color on its rump and head.

Their preferred habitat is spruce, fir, and pine forests, with abundant seeds for them to feed on. Throughout the summer, they’ll also feed on insects, but as winter rolls around, they’ll move exclusively back to seeds.

They have a particular fondness for sunflower seeds and suet, so if you’d like to attract the Pine Grosbeak to your yard, make sure you’ve stocked up on these!

As you may have guessed from the name, the House Finch is also a member of the Finch family.

They are non-migratory and can live in Pennsylvania all year round in forest edges, farms, parks, and backyards.

The House Finch can be identified by its red head and breast, along with brown-streaked feathers that cover the rest of the body.

You are, however, more likely to hear a House Finch before you see one, as this little bird is notorious for its loud song.

They also live in groups which, as you can imagine, become very loud the more numerous they get!

House Finches will happily visit bird feeders, but you can attract more into your garden by filling your feeders with black sunflower or nyjer seeds.

These are a particular favorite of this colorful little bird and are almost guaranteed to draw them in.

The Painted Bunting is one of the most colorful birds you’ll find in Pennsylvania.

They have a scarlet red chest and underparts, bright blue head and mask, yellow-green wings, and a blue-black tail. This gives them the appearance of an artist’s palette. Hence the name “Painted Bunting”.

These tiny birds measure an average of 5 inches in length and live in semi-open habitats.

This gives them a little more flying space and makes catching insects on the wing easier during spring and summer.

Painted Buntings are migratory and will head South for the winter to set up home in Southern Florida, Central America, and some Caribbean islands.

While they are in Pennsylvania during the warmer months, you can attract them to your garden by offering sunflower seeds and millet.

You’ll also increase your chances if you offer low, dense vegetation for them to shelter in.

The Scarlet Tanager is one of Pennsylvania’s most easily identifiable red birds on our list.

Almost the entire body is covered with bright red feathers, with just the wings and tail black.

These are the markings of the male, however.

Female Scarlet Tanagers are more of an orange-yellow color but retain the same black wings and tail.

A migratory bird, the Scarlet Tanager, spends its summer in Pennsylvania, where it will nest and raise a brood.

As soon as winter starts approaching, it will take to the skies and head to the warmer climes of South America.

They are pretty shy birds and tend to stay in their forest habitats. But, should food start to become scarce, they will venture out to find it.

So, if you want to attract a Scarlet Tanager to your backyard, make sure you have fruit on offer!

They love nothing more than feasting on strawberries, raspberries, blackberries, and any other soft berry that you can think of!

Just like its relative, the White-Winged Crossbill, the Red Crossbill sports the namesake beak that crisscrosses at the end.

Appearance-wise, however, they are pretty different. The Red Crossbill has no white markings on it at all.

Instead, it has a bright red chest, cap, and neck with plain brown wings and tail.

They’re also a little more common than the White-Winged Crossbill and can be found in Pennsylvania all year round, along with other Northern and Western States.

The Red Crossbill’s preferred habitat is coniferous forests, where there is an abundance of seeds for them to use that specialist beak to retrieve.

Another year-round resident of Pennsylvania, the Common Redpoll, can be identified by its bright red forehead, pink breast, and brown body with white markings.

Unlike a lot of birds, they are mainly active during the winter months, and their bright red markings stand out beautifully against the snowy backdrop of Pennsylvania winter.

They have also been known to tunnel into snow when the weather becomes freezing to stay warm at night.

They rely on a lot of food to keep them warm and healthy during the winter and need to eat up to 42% of their body weight every day just to survive!

So, if you want to attract the Common Redpoll to your garden and help it survive the winter, ensure you fill your feeders with nyjer seeds or thistle.

They don’t only love these – they are filled with fats and oils essential for helping them maintain their body weight.

“Purple?” we hear you cry. “I was looking for red birds!” Well, despite its name, the Purple Finch does have red markings.

They have a red head and breast, brown on their back, and wings. Their name likely comes from the fact their red heads are almost a dark purple, but they are technically red.

Another year-round resident of Pennsylvania, the Purple Finch sets up its home in evergreen forests where it feeds on berries, seeds, tree buds, and even flower nectar.

They will also visit bird feeders, particularly during the winter when their preferred food is scarce.

Sunflower seeds are their favorite, so if you want to draw this colorful little bird into your garden, make sure you’re well-stocked on these!

The Summer Tanager is probably the rarest of all of the birds on this list. The male is almost entirely covered with bright red feathers, except for a few black streaks on its wings.

The females, however, are not red at all. Instead, they sport bright yellow feathers but retain the same few black markings.

If you want to increase your chances of spotting a Summer Tanager, you’ll need to head to their preferred habitat of open woodlands, as they are unlikely to visit your garden.

They feed almost exclusively on insects and are masters at catching wasps and bees mid-flight.

They have a unique way of eating them as well, snatching them out of the air and beating them against a branch before devouring them.

This may seem savage, but it’s pretty clever. The reason they do this is to remove their stinger!

There are 10 red birds that you can spot throughout the great State of Pennsylvania.

Wherever you spot them, make sure you open up this list the next time you see a small red flash of color in the sky, so you’ll know what you’ve just seen!