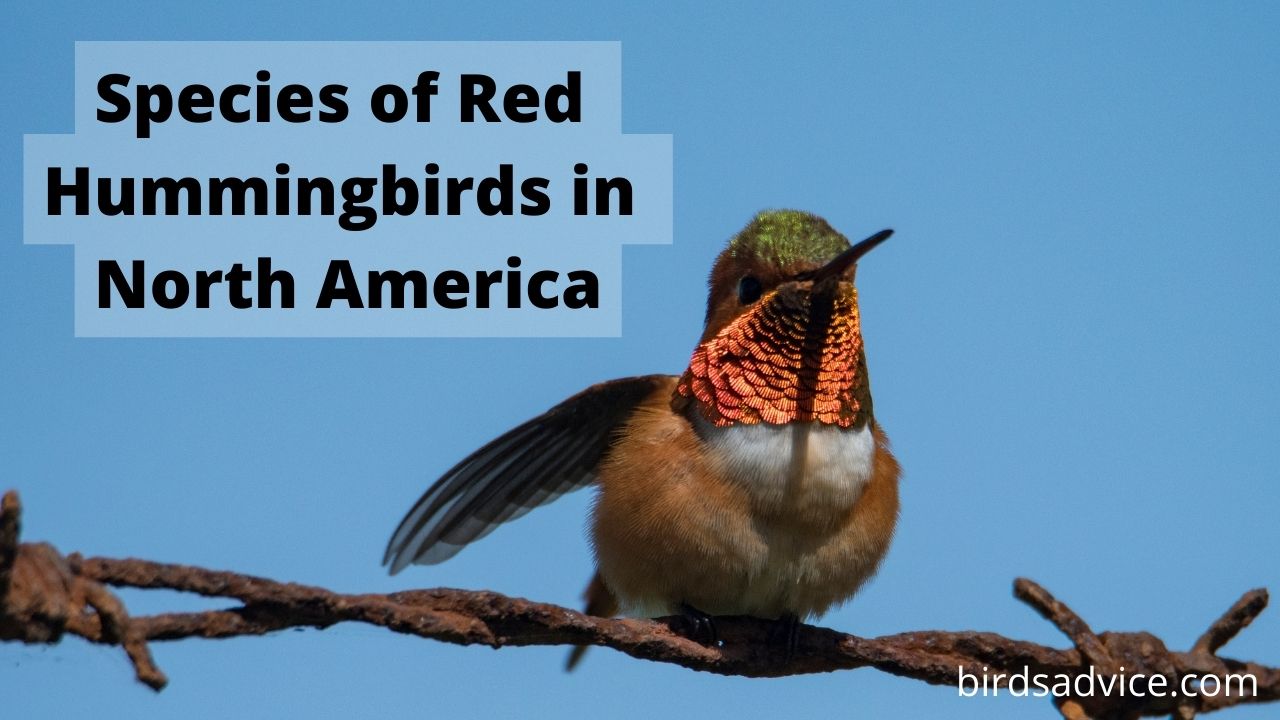 Hummingbirds are one of the most popular birds throughout North America, and there are a total of 20 different species.

They come in various shapes and colors, but did you know that only a few species have red markings on them?

Here, you’ll find a list of 7 species of red Hummingbirds in North America. We’ll look at their identifying characteristics, diet, habitat, and more.

So, if you’ve recently spotted one of these glorious little birds fluttering around your backyard or local open space and weren’t sure what species it was, you’ve come to the right place!

The Cinnamon Hummingbird can be found from Costa Rica up to NorthWestern Mexico where they set up home in pine and oak forests and scrubby areas.

Here, they dart from flower to flower, feeding on the sweet nectar inside. They also eat any tiny insects they find crawling on the plants.

As you may have guessed from its name, the Cinnamon Hummingbird has an orange, cinnamon-colored underneath which runs from their chin to their tail.

They also have bronze and green feathers on their upperparts, a red tail, and a long red beak with a black tip.

This long beak houses an even longer tongue, which they use to get deep into tubular flowers and suck up the nectar.

Their white throats are also beautifully-dotted with flecks of black and they have a long, jet-black bill.

Found in the higher elevations of open woodlands and meadows, the Broad-Tailed Hummingbird can be spotted between May and August and is most abundant in California.

Come fall, it heads further South to Mexico to spend winter in warmer climates. However, if the weather stays particularly warm, some will stay in California all year round.

Like most hummingbirds, the Broad-Tailed Hummingbird’s main source of food is nectar that it feeds on with its long tongue.

It also supplements its diet with insects, and feeds it young with insects too. It also nests in evergreen forests and builds a delicate nest from gossamer and spider webs.

With a bright-green back and crown, gray underside, and namesake red-colored throat, the Ruby-Throated Hummingbird is instantly recognizable.

Interestingly, the Ruby-Throated Hummingbird is the only Hummingbird species that breeds in North America.

Males arrive first, usually around two weeks before females, and they stay from May until September.

When September rolls around, hundreds of Ruby-Throated Hummingbirds gather together along the Gulf of Texas before heading to the skies and coming to Central America and Mexico for winter.

Dual-feeders, this beautiful little bird feeds on both nectar and insects. It’s a bit of an expert when it comes to catching flying insects as well, and can easily snatch them out of the air on the wing using its sharp bill.

You can attract Ruby-Throated Hummingbirds to your backyard with nectar feeders.

The Calliope Hummingbird is absolutely tiny, measuring no more than the size of a ping-pong ball. In fact, it is the smallest recorded bird in the United States.

Don’t let its tiny stature fool you, though. The Calliope Hummingbird has tons of stamina and travels over 5000 miles every year migrating from Mexico to Canada and back.

The male Calliope Hummingbird has a magenta-red patch on its throat, a dark tail, white underparts, and a dark green back.

Females don’t have the red throat-patch, but their underside is more of a pale-red color than the male.

Migration starts quite early in the year, with some Calliope Hummingbirds traveling along the Pacific Coast as early as mid-April.

Some may even venture further North to Canada, arriving around May. Resourceful little birds, the Calliope Hummingbird will often reuse last year’s nest or build on top of an older one in an evergreen tree.

The male can be identified by its bright red-orange feathers covering its back and belly, its iridescent red throat and white breast.

As is the case with most birds, the female Rufous Hummingbird isn’t quite as colorful, and sports a rusty-pink underside and green-brown upperparts.

Only outdone by the Calliope Hummingbird, the Rufous Hummingbird is one of the longest migratory birds in the world.

Every year, this tiny bird that measures around 3-inches in length makes a 4000 mile journey from Mexico to Alaska to breed. It then makes the return trip in late summer and fall.

The Rufous Hummingbird’s diet mainly consists of nectar which they find deep inside tubular flowers.

They also feed on smaller insects such as flies, gnats, and midges, and will feed these to their chicks.

They build their nests from a mixture of spider webs and soft plants, constructing them high up in the trees of evergreen forests.

This provides them with safety and cover throughout the entire breeding season. Once the nest is constructed, the female will lay up to 3 tiny eggs that measure about 0.5-inches.

Like many Hummingbirds, the Rufous Hummingbird doesn’t let its small size get in its way.

It is incredibly territorial and will chase off any other hummingbirds that come near its nest, even those that are still arriving after migration.

Another pretty common bird along the Pacific Coast, Anna’s Hummingbirds measure around 4-inches long and have a tiny wingspan of 4.7-inches.

The male can be identified by its red-pink throat and iridescent feathers that cover the rest of its body. Females also have the same iridescent green feathers, but their throat is mostly gray with just a few red spots.

Anna’s Hummingbirds aren’t too fussy about where they set up home and have a range of habitats from forests to parks and backyards.

They also aren’t shy about visiting nectar feeders, and are particularly common in gardens with Nicotiana, Diplaucus, Silena, Ribes, Arctostaphylos, Agave, Castilleja, and Eucalyptus. They also feed on spiders and small insects.

During the mating season, the male Anna’s Hummingbird performs a dramatic aerial display in order to attract a mate.

This involves flying to heights of as much as 130 ft and diving vertically toward the ground, making a noise with their tail feathers as they do so.

Once they find their partner, they’ll mate and then leave the female to do all the work!

This includes constructing the nest, incubating the eggs, and raising the brood. Anna’s Hummingbirds will also have up to 3 broods per season.

Very similar in appearance to the Rufous Hummingbird, the Allen’s Hummingbird has an iridescent red-orange throat, orange underparts, eye patches, and tail.

The rest of their body is covered in a light-green color. Female Allen’s Hummingbirds have all of the same coloring as the male, they only lack the bright orange throat.

This tiny bird that measures just 3.5-inches long can be found between Oregon and California, and sets up home in shady forests near streams.

Here, they’ll construct a nest out of soft leaf material and spider webs, and a mating couple will raise up to 3 broods in a single breeding season.

They are quite early arrivals, migrating from Mexico and heading towards the Pacific Coast as early as January.

As soon as late summer and fall arrive, they’ll begin the journey back South to warmer temperatures. Some can be found all year round in Los Angeles, and those that live in Mexico are considered non-migratory.

There you have 7 species of red hummingbirds that you can spot throughout North America.

The main thing to remember here is that the majority of these are migratory birds, and will only spend spring and summer in North America. This is particularly true if you live further North.

However, for those that live in the South of the United States, seeing a Hummingbird outside of the breeding season isn’t uncommon, especially if the temperatures are unseasonably warm.