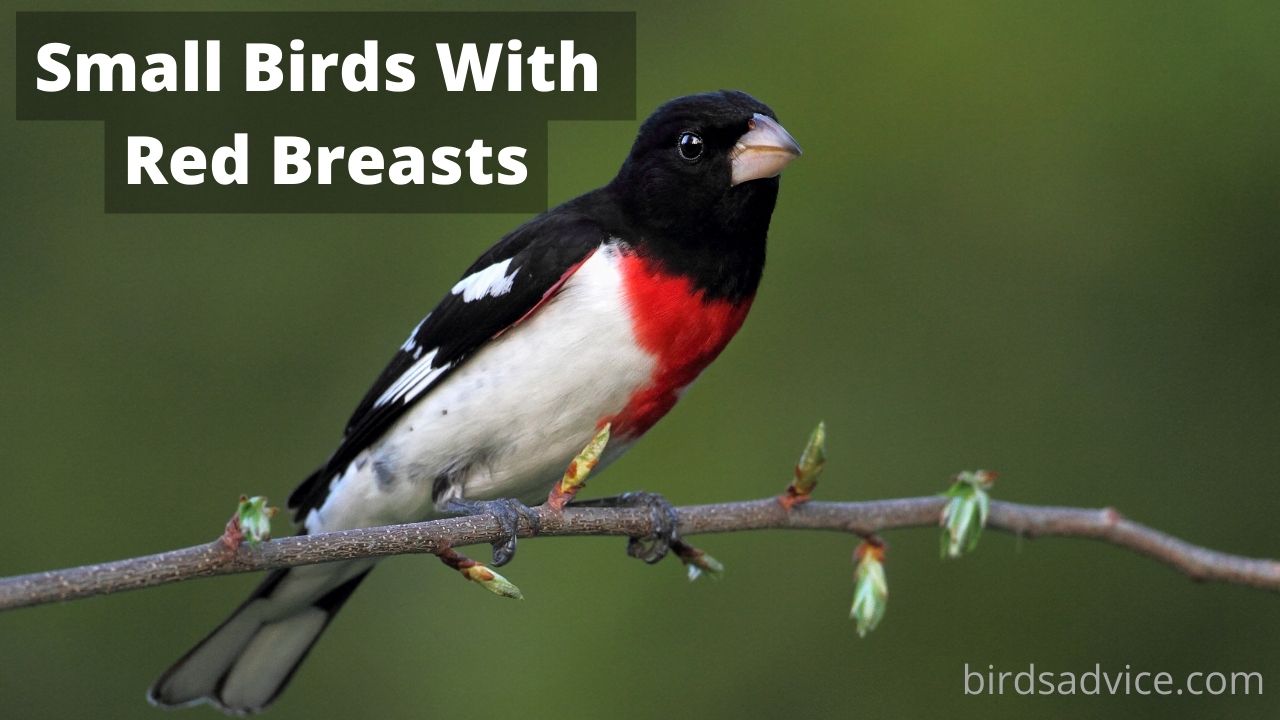 Ask anyone to think of a small, red-breasted bird, and they are most likely to say “a Robin.”

But, while this is arguably the most famous of all red-breasted birds, did you know that there are quite a few others as well?

Below, we’ll take a look at 11 small birds with red breasts. From the super-famous European Robin to the lesser-known Rose-Breasted Grosbeak, you will find a whole array of red-breasted birds that you may never have heard of before!

Let’s get the most famous of them out of the way first. The European Robin is Native to Europe but is most commonly found in the British Isles.

It can also be found in Western Siberia and North Africa but is yet to be recorded south of the equator.

It has brown plumage, a white underbelly, and a bright red breast that is flanked with a shade of gray.

Males and females are pretty much indistinguishable from each other, with both having the same markings and famous red breast.

The European Robin measures 12.5 – 14 cm on average, and its diet consists mainly of insects, worms, and fruit.

They are very inquisitive by nature and will also happily visit a bird feeder or table to feed on seeds and suet if left out for them.

Despite their confusing name, the Purple Finch actually sports bright red plumage across its chest and cap.

The rest of the body is brown and has markings that are remarkably similar to that of a House Sparrow.

Common in most parts of the United States and Canada (although their population fluctuates between regions), Purple Finches measure around 11.4 – 16.5 cm in length and tip the scales at just 1.1 ounces.

Don’t let their small stature fool you, though. These are some feisty birds!

Aggressive around both territory and food, their diets consist mostly of seeds (which they pick straight from pine cones with their specialist beaks), beetles, caterpillars, and other small insects.

They will also visit gardens to snatch the seeds out of grapes and blueberries, whether invited or not!

Native to Europe, North Africa, and the Western Palearctic, the Common Linnet is one of the lesser-known red-breasted birds.

Markings and colorations differ between sexes, with males sporting a reddish-brown back, gray throat, and red cap and breast.

On the other hand, females are much duller and do not have any bright colors on them at all.

However, they will happily visit gardens to feed on seeds and berries left out for them or search on lawns for insects.

The male Pine Grosbeak has grayish-black wings and a matching tail. The rest of their plumage, including their breast, is a glorious rose-red color.

As is the case with most birds, the female Pine Grosbeak is much duller in color and sports a greenish-yellow tinge on its back and wings.

A migratory bird, Pine Grosbeaks, spends the warmer months in North America and uses Alaska, Newfoundland, and Canada as their breeding grounds.

When the weather starts turning colder, they take to the skies and head south to Mexico.

Regardless of where they are at any given time, their habitat preference remains the same, and they’ll set up home in moist, evergreen forests, open woodlands with heavy undergrowth, and coastal pinewoods.

Found mostly in Canada and Alaska’s boreal forests, the Common Redpoll measures 11.4 – 14.2 cm in length and tips the scales at a minuscule 0.71 ounces.

However, they aren’t strict residents of these areas, and their range covers the Northern Atlantic Coast from Maine to Nova Scotia and Quebec to Minnesota.

They are primarily insectivorous, but they’ll also feed on berries, liches, seeds, and mosses when food starts to become scarce. It’s also been known to store food in bark crevices of birch trees for later.

Common Redpolls are particularly shy birds but, come the breeding season, they prefer to hide away in areas with coniferous trees, including pine, larch, spruce, hemlock, and fir.

One of North America’s most commonly seen birds, the House Finch’s range stretches from Alaska to Central America and Canada to Panama.

They’re so abundant in number and wide range that they’ve also been spotted in the West Indies and Hawaii.

They aren’t only known for being so common, though.

They’re also one of the most beautiful birds on Earth and sport scarlet-red heads and breasts. The rest of their plumage is brown, which contrasts beautifully with their red markings.

These birds nest in brushy habitats, including woodlands, fields, and thickets. They’ve also been known to nest in parks, gardens, and yards.

Essentially, they’ll set up home anywhere as long as there are tall trees and plenty of foliage to take advantage of.

They are equally unfussed when it comes to food and will happily peck away at seeds, grains, fruits, berries, and insects, including grasshoppers and other ground-dwelling invertebrates.

If you want a real chance of enticing these birds into your garden, you should put down some thistle seed as this seems to be their absolute favorite food.

Sporing a red breast, crown, and neck with light-gray underparts and a streak-browned back, Cassin’s Finch really is a wonder to behold.

Native to North America, these tiny birds measure 15-16 cm long and weigh an average of 1 ounce. They can also be found on the West Coast of Canada and the United States but have also been spotted as far south as Texas.

They also nest very high up and have been found at elevations of 8,000 feet in Montane pine-oak forests, meadows, and high-elevation grasslands.

Mainly insectivorous, Cassin’s Finches eat ants, beetles, and spiders mainly, but they have been known to peck at seeds from yucca plants and mesquite pods.

An absolutely tiny bird, the Vermilion Flycatcher measures around 12.7 cm and weighs in at just 0.53 ounces.

It has a bright red breast topped with a white neck, and the rest of its plumage is brown.

It’s also a migratory bird that was first found in the Southwestern United States and Mexico, but its range now extends to most of Eastern and Western North America.

The Vermilion Flycatcher’s nesting season runs from March through September, and they will choose an elevated spot in a tree or high bush near a source of water.

They move to even higher elevations during the winter months but tend to stick to dense tree foliage and thickets near rivers and open streams.

Strictly insectivorous, the Vermilion Flycatcher eats any insect or spider that it can find, and they’ll often hunt for these in the branches directly above their nests. Talk about convenience food!

As you may have ascertained from its name, the Painted Bunting is a super colorful bird! Not only does it have a bright red breast, but it also has a blue head and a back with shades of yellow and green.

Coming from the same family as the Cardinals, they are most commonly found in the woodlands of Southeast America.

However, they are extremely elusive, and you’ll be lucky to spot one, despite their colorful appearance.

If you are lucky enough to find one, it’s quite likely that a few more are close by as they are very social and forage in flocks with both their own species and others.

With black, white-tipped wings and an almost entirely red body, we’d be foolish to leave the unique-looking White-Winged Crossbill off our list.

Found mostly in the Boreal forests, this small red-breasted bird is highly social and lives in flocks all year round.

It doesn’t only have unique colorings, though. Look closely, and you’ll also see why it’s called a “crossbill.” The top and bottom of their bill cross over at the tip, and this helps them prize apart seeds and get to the good stuff inside!

The rest of its body consists of a black neck, black head, black back, and white underparts. The wings are also black but spotted with patches of white.

This migratory songbird is most commonly found in Eastern North America right across from the West Coast to East Coast and North to South Canada.

Come winter, they’ll take to the wing and head to California and Mexico, and some have even been spotted as far south as Central America.

Preferring to live in open woodlands, orchards, farmland, and parks with plenty of trees, the Rose-Breasted Grosbeak can often be found feeding from pine cones in winter and will also visit bird tables and feeders if well stocked.

As you can see, loads of small birds are out there with red breasts! So, while the European Robin may remain King and continue to adorn our holiday cards for years to come, they aren’t the only bird with a bright red breast!