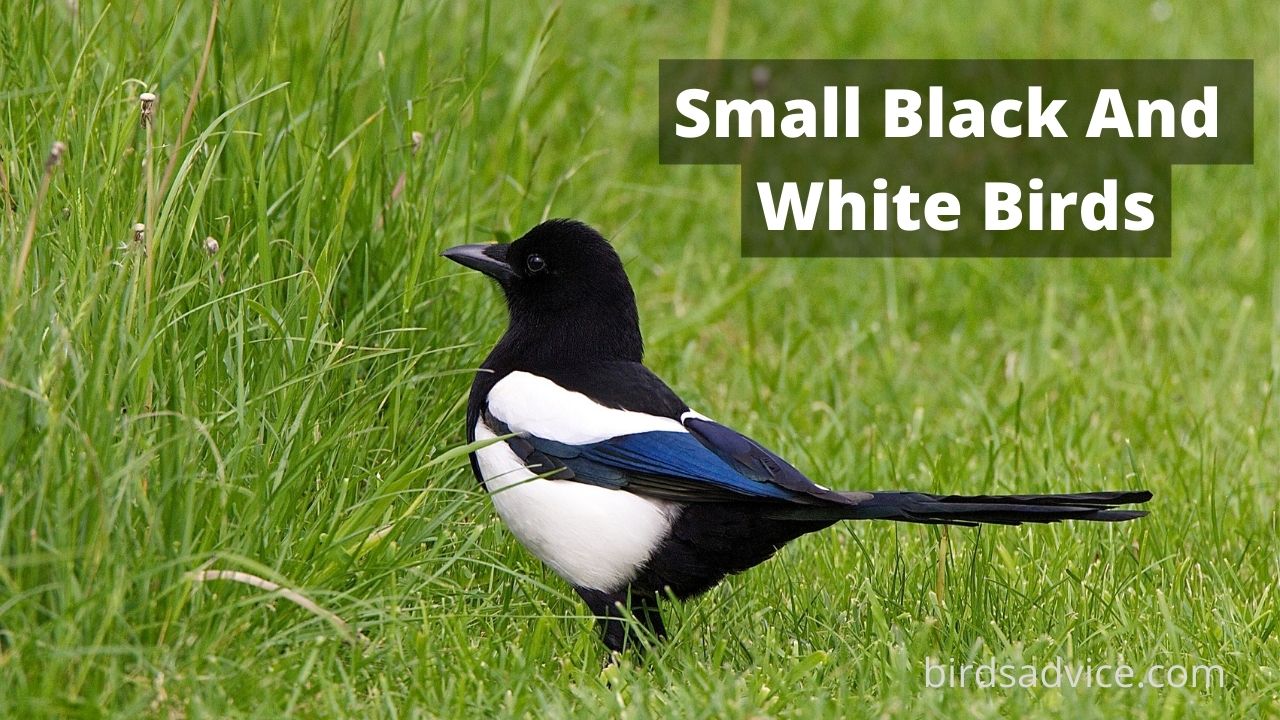 Small black and white birds can be quite difficult to identify. Not only are they almost perfectly camouflaged from their surroundings, but their size means that spotting them in the first place isn’t always that easy.

But, if you’ve seen a small black and white bird hopping around your local park or snacking at your bird feeder, you’re likely to want to know what it is.

That’s what we’ll look at here.

Below, you’ll find a list of 12 small black and white birds, from common garden visitors to those a little more elusive.

This small, non-migratory bird can be found all over North America.

Measuring just 5 inches in length, it can be identified by its light gray colored wings, black cap, black bib, and white cheeks.

The wings also have white markings around the edges and a long, pointed tail.

The Black-Capped Chickadee is also a common backyard visitor found mainly in mixed or deciduous forests.

Their diet consists mostly of insects throughout the summer, but they will also eat seeds, fruits, berries, and suet.

So, if you’re looking to attract this beautiful little black and white bird to your garden, fill your feeders with these.

Native to North America and with a range covering Canada, the United States, Mexico, Cuba, Panama, and Costa Rica, spotting a Rose-Breasted Grosbeak is a pretty easy task.

They can be identified by their white underparts, black back, wings, head, and tail. They also have white patches on their wings and a namesake red patch on their chest.

Their primary diet is insects, and they have a special evolutionary adaptation that helps them catch their prey while flying.

They can stretch one wing out and create a net shape, causing flying insects to get trapped in the wing. The Rose-Breasted Grosbeak then picks it out and swallows it down in seconds.

This black and white bird will eat seeds, berries, and fruits during winter when insects are a little more scarce.

They’ve also been known to feed on weeds, including wild plum and thistle.

Measuring just 4 inches long and topping the scales at 0.5 ounces, the Black and White Warbler is a small songbird found throughout North America.

It’s also very easy to identify, thanks to the unique black and white markings that cover its entire body.

Black and White Warblers are most often found in deciduous forests, but they have also been known to set up homes in mixed forests.

Throughout the spring and summer, their preferred food choice is spiders and other insects, as this helps to give them the energy and fat reserves needed for the long migration South during the winter.

These non-migratory birds can be found in coniferous forests and arctic shrubland across North America.

They’ve also been recorded in deserts and grasslands, but far fewer numbers.

Measuring around 11 inches from bill to tail tip, the White-Breasted Nuthatch is identifiable by black cap and tail, dark gray upperparts, and namesake white breast.

They also have a bright orange spot right at the base of their belly, just underneath the tail.

As you may have guessed from their name, the White-Breasted Nuthatch has a diet that is almost exclusively based on nuts.

They also have an interesting feeding technique, carrying any nuts they find over to a tree and ramming them into the bark. This helps crack the hard outer shell and release the seed inside.

Easily identified by its namesake yellow spot on its rump, the Yellow-Rumped Warbler is a fairly common sight all over Canada and North America.

Its blue-gray upperparts, white underparts, and black wing bars can also be identified.

Their preferred habitat is coniferous forests near a water source such as a stream, lake, or estuary.

Here, they hunt for insects on the wing during the spring and summer, and when winter rolls around, they’ll turn their attention to seeds and berries instead.

The Yellow-Rumped Warbler also has various calls, including chirps, whistles, trills, and grunts. They are most vocal at dawn.

A member of the Flycatcher family, the Black Phoebe is a medium-sized bird with dark gray upperparts, black wings, a black tail, and pale underparts.

It also has white markings on each wing, and its bill is slender with a slight curve.

The Black Phoebe has a wide range and can be found across Central America, Southern Europe, India, China, and Northern Africa.

Their preferred habitat is open areas near a water source, particularly marshes and ponds, but they’ll also settle near a stream or creek.

They are almost exclusively insectivorous, hunting on the wing and catching insects such as moths, bees, butterflies, and dragonflies.

One of North America’s smallest Woodpeckers, the Downy Woodpecker, can be found in deciduous and mixed forests throughout Canada and the Eastern United States.

These little birds measure just 7 inches in length and can be identified by their black and white plumage.

They have a white underside, black upperparts, black cap, black eye mask, and black wings with white markings. They also have a telltale red spot on the back of their head.

The Downy Woodpecker sets up its home in tree cavities, which it creates by drilling into the bark with its bill.

Doing this doesn’t only build a home but helps them find food, extracting insects from the bark as they go. They also eat seeds, berries, insect larvae, and pupae.

Found living mostly in dense, mixed woods, the Carolina Chickadee can be identified by its black-capped head, black bib, and white striped face.

It also has gray upperparts dotted with random patches of black.

While native to North America, these cute little birds migrate south to coastal areas during the winter.

They always return home to breed and build their nests by drilling into rotten wood on trees.

They are almost exclusively insectivorous but will come to bird feeders filled with seeds, berries, and suet.

This is particularly true during early fall as they start to fatten themselves for their long migration.

One of the larger birds on our list, the Magpie measures up to 26 inches in length and has an average wingspan of 24 inches.

These black and white birds are one of the most recognizable in the world with their black and white markings and iridescent blue-green flashes of color in their tail and wings.

The Magpie, a popular creature of fairytale and folklore, can be found in open areas such as meadows and grasslands.

Here, they feed on berries, fruits, grain, and insects, including beetles and grasshoppers.

They’ve also been known to eat carrion, and larger birds have also been recorded killing small mammals like mice and voles.

Their thuggish nature can prevent other birds from feeding in your garden, so be careful encouraging them into your yard!

This member of the Woodpecker family is unmistakable with its gray upperparts and white underparts that are both flecked with black spots.

It also has a black bib, gray cap, pale orange eye mask, and a bright red mark on the back of the neck.

Like most other Woodpeckers, the Northern Flicker roosts in holes in trees that it bores out with the help of its strong bill.

They also nest in these holes, and during the breeding season, the female will lay as many as eight eggs that she’ll incubate and raise with the help of the male.

You’re most likely to spot a Northern Flicker in forest edges and open woodland, although they have also been known to settle in parks and suburban gardens.

Often found foraging on the ground for food, these remarkable birds have a diet that consists of beetles, ants, seeds, and fruit.

It also has black wings with white markings, a black eye mask, and a black bill. They measure an average of 8 inches in length and have a wingspan of 12 inches.

This is a predatory bird that is founded year-round in the Southern States of North America.

This means that it doesn’t only feed on insects but will hunt lizards, small birds, and even small mammals.

They hunt by clutching their prey in their sharp talons and skewering them on thorns to kill them.

They have also been known to force their prey into small spaces, crushing them to death. So, while this little bird may look cute, it has the heart of a much bigger bird of prey!

Another of North America’s smallest Woodpecker species, the Acorn Woodpecker, can be found in almost every State.

They measure around 7 inches in length and are easily identified by their black back, white-flanked wings, white underparts, black eye mask, and black mouths.

They also have a bright red cap on the top of their head.

Unlike many species of Woodpecker, the Acorn Woodpecker lives in large colonies. These are most abundant in Arizona, Texas, Oklahoma, and New Mexico, where they can be found year-round.

Unsurprisingly, one of their favorite things to eat is acorns.

However, they also eat berries, beetle larvae, ants, and several other types of nuts. Acorn Woodpeckers are also ground feeders and can be seen hopping around the woodland floor for food.

Many species of small black and white birds can be found all over North America. From those, you’ll find in flitting around your backyard to those you’ll need to go a little further afield to spot.

However, with the help of our list above, identifying that little black and white birds you’ve noticed hanging from your feeders recently should be much easier.