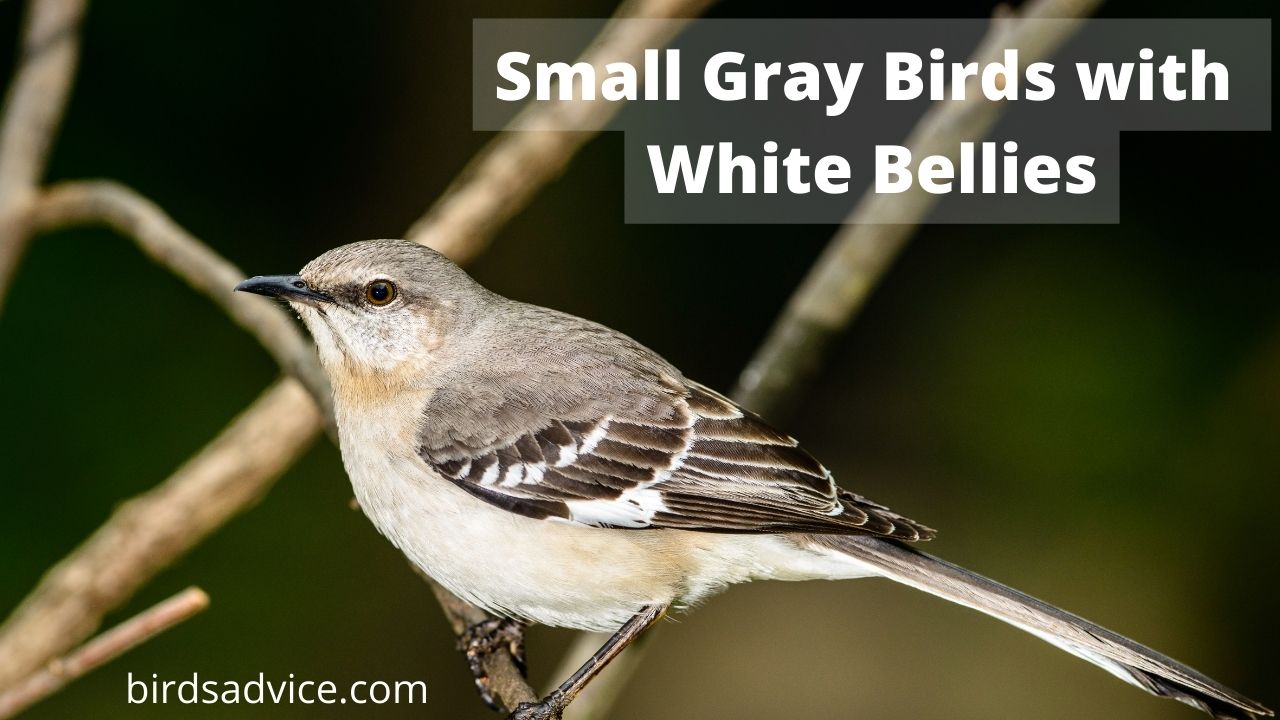 Some birds are easier to spot and identify than others. But, some of them fly under the radar altogether, almost living their entire lives without being seen!

These are usually duller in color, such as gray birds, which blend seamlessly with their surroundings.

But, if you have seen a small gray bird with a white belly and you’re not sure what it is, you’ve come to the right place!

To help you identify your new feathered friend, we’ve put together a list of 13 small gray birds with white bellies.

This small, unassuming bird has a gray-brown body, white belly, throat, and chest.

It also has a small crest on the top of its head, which is the feature that most avid bird watchers use to identify it.

The Eastern Phoebe is native to North America, and this is where it spends spring and summer.

During the breeding season, it makes a nest from twigs and leaves lined with hair, feathers, or moss to provide extra insulation and protection.

They build these nests in dense woodland, usually near a water source, and have often been known to set up homes in abandoned woodpecker holes.

Come winter, they head further South and have been recorded in Mexico.

With olive-gray upper parts, wing, and tail and a contrasting white belly and ringed eye, the Willow Flycatcher is often regarded as one of the most beautiful birds in North America.

You’ll most likely spot one in deciduous woodland near a source of water, such as a lake or stream, and they have been recorded in all States as well as Southern Canada.

You’ll need binoculars to spot a Willow Flycatcher, though. Measuring just 5 inches in length, they are one of the smallest birds in North America.

They don’t let their small size hold them back and fiercely protect territory and food.

Their diets consist mainly of insects, particularly mosquitos and hoverflies, but they will also feed on seeds and berries when their preferred source of food becomes scarce.

Another small, North-American bird, the Dark-Eyed Junco, can be identified by its pure-white underside and gray-brown upperparts.

It also has a telltale yellow spot on the top of its head which changes with age, and its namesake jet black eye.

Unlike many North American birds, the Dark-Eyed Junco stays put during the winter months and sets up home in coniferous forests filled with spruce, fir, pine, or Douglas fir trees.

This offers them extra protection during the winter, but in spring and summer, they’ll move to deciduous forests with maple, oak, aspen, cottonwood, and hickory trees.

Their preferred food source is seeds, particularly those from coniferous trees, which is another reason why they prefer to live in these habitats throughout the winter.

As its name suggests, the European Crested Tit is a member of the Tit family. And, like all other Tits, they are agile little birds often found jumping from branch to branch or hanging upside down from a feeder.

Their most striking feature is their almost punk-rock-like crest on the top of their head, which is black and white.

They also have a white underside and dark gray upperparts. Their magnificent crest also indicates their current state of mind.

When it’s down, they’re relaxed. When it’s raised, they’ve sensed danger or are in the middle of a territorial dispute!

Most commonly found in deciduous and coniferous woodland, the European Crested Tit nests on the ground or in low shrubs.

They build their nest from lichen, moss, leaves, and other vegetation they can find on the forest floor.

Found across North America, the Tufted Titmouse is a small songbird that measures just 5.5 inches in length and tops the scales at 0.9 ounces.

Its white underparts, light-gray upper parts, and orange-colored flanks can be identified.

Their most prominent feature, however, is their black and gray crest.

The Tufted Titmouse sets up its home in many habitats, including deciduous forests, mixed woods, shrublands, parks, and backyards.

It also has an extensive range from Southern Canada through most of the United States down to Mexico and Central America. So, your chances of spotting one are pretty high.

You’re likely to hear a Tufted Titmouse before you spot one, though, as they are famed for their loud song.

It uses this call to communicate with other birds in the area and report on food sources and deliver warning signals.

As you may have guessed from its name, the Blue-Gray Gnat Catcher is an exclusively insectivorous bird that feeds mainly on gnats.

It spots these tiny insects with its keen eyes, and it can even hunt them in low light conditions thanks to 30,000+ lenses in each large eye.

Gnats aren’t their only food source, though. This little bird will also happily eat spiders, insects, and insect eggs.

They hunt in low vegetation by flying around 2 meters above the ground, then swooping down and catching insects on the wing.

All pretty impressive, right? But what does the Blue-Gray Gnat Catcher look like? It’s pretty easy to identify. It has blue-gray upper parts and pure white underparts, and a jet black beak.

Sagebrush Sparrows look very similar to their House Sparrow cousins. Their markings are pretty much the same, the only difference is their color.

They have light gray upper parts, a gray head, and white underparts. It can also be identified by the dark black crest right in the middle of its chest.

Found throughout North America, from Alaska to Arizona, the Sagebrush Sparrow is a pretty common bird.

You’re most likely to spot one in sagebrush fields (hence the name), shrublands, prairies, grasslands, and any other areas that are particularly dry.

Here, they feed on an almost exclusively insectivorous diet of spiders, beetles, grasshoppers, and other insects.

They have also been known to eat seeds, certain fruits, and other plant parts when food sources are scarce.

Another member of the Tit family, the Carolina Chickadee, has a white chest, white belly, light gray upper parts, and orange-brown flanking.

It’s also a tiny bird but has a long tail that is almost out of proportion to its size.

Found mainly in the deciduous forests of Northern America,  the Carolina Chickadee migrates south during the winter and sets up home in Alabama, Florida, and Georgia. It has also been spotted as far South as Mexico.

Their diet is mainly insectivorous, although it will happily peck away at berries and seeds. They have also been known to eat worms, spiders, and even mice when times get tough!

One of North America’s few non-migratory birds, the Blak-Capped Chickadee has a gray body, white underparts, and rust-orange flanks.

It also has a black cap that runs through to the eye and creates a black mask, as well as a black bib.

Member of the Tit family, the Black-Capped Chickadee is a highly social bird that lives in large flocks all year round. These flocks become even more prominent in winter when they huddle together for warmth and protection.

Found from Southern Canada through to Virginia, Black-Capped Chickadees are familiar backyard visitors.

One of the most identifiable features of the Northern Mockingbird is its two white wing bars, which are particularly visible while it is in flight.

Their upper parts are gray-brown, while their underside is grayish-white.

Northern Mockingbirds are famously aggressive in defending their territory and are usually only spotted as single birds or in a monogamous pair.

They’re also most famous for being able to copy another bird’s song (hence the name “mockingbird”), and a male can learn and mimic as many as 200 other songs in his lifetime.

Native to Southern and Eastern States, it’s pretty rare to find a Northern Mockingbird on your bird table as they prefer to feed from fruiting bushes and trees, most commonly blackberries, mulberries, and hawthorns.

So, if you want to try attracting these birds to your garden, try planting some of them.

The White-Breasted Nuthatch is one of the smallest birds in the world, measuring a maximum of 5 inches long.

Its namesake white breast and blue-gray upper parts can be identified. It also has a black cap and a wingspan of around 10 inches.

Found in deciduous forests, woodland, parks, and backyards, the White-Breasted Nuthatch is a common sight across most of the United States and Southern Canada.

Their diet consists mainly of nuts (where they get their name from), but they also eat insects such as beetles, caterpillars, ants, and spiders.

They have a rather unique feeding habit, as well. Once they’ve got their wings on a juicy nut, they’ll fly back to their territory and ram it into the bark of a tree.

This helps crack the outer shell and get to the seed inside the nut.

This stout little bird is almost more round than long, measuring just 3 inches and weighing a minuscule 0.2 ounces. It has a soft gray upper, a gray-white underside, and a long tail and stubby bill.

It also has slightly brown tinges on the face.

Native to the Western United States, the Bushtit can be found in woodland, scrubby areas, open parks, and backyards.

It has a particular fondness for sunflower seeds, mealworms, and suet and will happily visit any bird feeder or table with these goods on offer.

While their small size can make them quite challenging to spot with the naked eye, you’ll know if you’ve got one nesting in your backyard, thanks to their incredible nests.

Constructed from spider webs and plant material, the Bushtit builds a nest hanging from a tree’s branch.

It also measures around a foot in length and takes this small but mighty bird around a month to construct.

Common across Canada, the Rocky Mountains, and parts of Alaska, the Mountain Chickadee is most easily identified by its black-striped mask.

It also has white eyebrows, a white underside, and gray upper parts. The tail is a slightly darker gray than the wings, and it measures around 5-6 inches in length.

Like most members of the Tit family, the Mountain Chickadee feeds almost exclusively on caterpillars and other insects during the summer, then switches to seeds, suet, nuts, and berries during the winter.

So, if you’d like to attract one of these to your backyard, make sure you fill your feeders with these offerings!

There you have it – 13 small gray birds with white bellies. Most of these you’ll likely find flitting around in your backyard, especially if you supply them with food during the winter months.

Others, like the Tufted Titmouse, you’ll have to listen out for a clue as to where they are!

How do I attract birds to my garden?

It’s straightforward to attract birds to your garden, but you’ll need to offer them an incentive to come in! Try filling multiple feeders with seeds, suet, peanuts, and mealworms.

This is almost guaranteed to draw them in, particularly during winter when other food sources are scarce.

Why don’t birds come to my backyard in the summer?

The answer to this is pretty simple. There are loads of insects crawling and flying around during the summer months.

Most birds will prefer to eat these as they are so high in protein, and they’re also a great source of food for raising their young.

Which birds are gray with white undersides?

Loads of different birds have gray upperparts and white undersides. Take a look at our list above to find out which bird you’ve spotted and where you’re most likely to find each species.