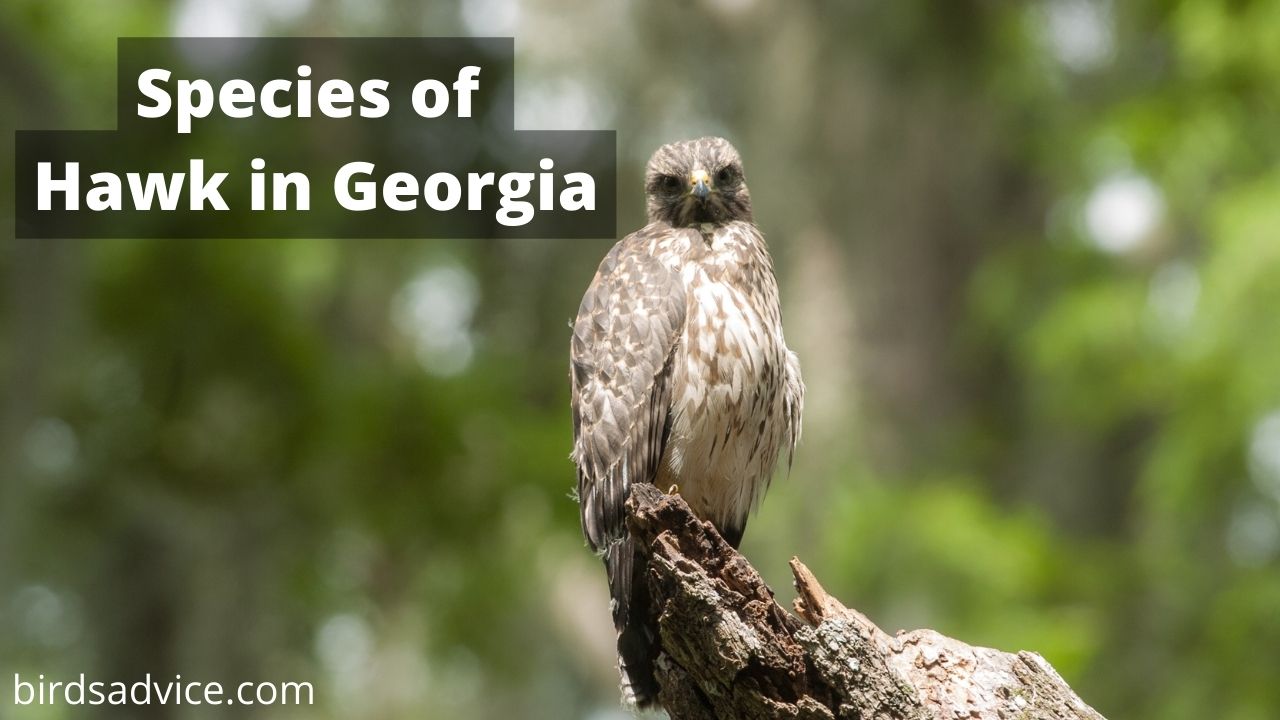 Do you live in Georgia and have noticed a large bird of prey circling your area recently?

Or, perhaps you’re visiting the area on a bird-watching expedition. Either way, one thing’s for sure – if you want to know the species of Hawk in Georgia, you’ve come to the right place!

Below, we’ll explore 6 species of Hawk you can spot in Georgia. We’ll look at their identifying features, habitats, feeding habits, and more.

In the end, you won’t only be able to identify which species of Hawk you’ve just seen, but you’ll also have a much better idea of where to find them!

Let’s start by looking at one of Georgia’s rarest Hawk species; the Broad-Winged Hawk.

While there aren’t very many of these in the State, the majority of those that do live in Georgia can be found in the North.

Come fall, you’ll have a much better chance of spotting one in the South as they begin migrating.

During this migration, hundreds of Broad-Winged Hawks flock together to perform an aerial spectacle known as a “kettle”.

This involves a swirling mass of Hawks spinning through the air in a murmuration before taking the sky together and heading further South.

The easiest way to identify a Broad-Winged Hawk is by its red-brown head, barred breast, and short, square-ended tail.

Their tails are also banded with dark brown and white markings, as are the underside of their wings, but this is only viewable while they’re in flight.

In terms of size, the Broad-Winged Hawk is quite compact, measuring around 15 inches in length and with an average wingspan of 35-inches.

Their preferred habitat is woodland or forest edges near a source of water.

Here, they perch high up in the trees and use their incredible vision to scope out their prey, which includes frogs, snakes, small mammals, and baby turtles.

The Broad-Winged Hawk also nests in these habitats and, rather than constructing its own, will reuse an older, abandoned nest built by another animal.

Unlike many birds of prey, the Northern Harrier is most common in Georgia during the winter.

It visits the State after spending spring and summer breeding in the Northern States and Canada.

Measuring around 18-inches in length and with an average wingspan of 43-inches, the Northern Harrier is most easily identified by its flying habit.

Rather than flying with its wings spread parallel to its body, it holds them much higher up, creating a V-shape in the process.

Its wings are also long and slender, and have dark-brown and white barring on the underside. Like many birds, the coloring between sexes differs on the Northern Harrier.

Males have gray upperparts, white underparts, and dark brown tail with a white patch on the rump. The female Northern Harrier is much duller in appearance, and sports brown feathers all over its body.

This magnificent bird of prey is most commonly spotted flying low over marshes and grassland in search of food, which consists of small birds and small mammals.

They also nest in these areas, constructing their nests close to the ground in the protection of willows and reeds.

Another of Georgia’s winter visitors, the best time of year to spot a Sharp-Shinned Hawk is between October and February.

They are also one of the smallest species of Hawk that visit Georgia, measuring around 11-inches long and with an average wingspan of 19-inches. This puts them at about the same size as a Crow.

Females are around a third larger than males, but that’s really the only difference between the sexes. In terms of looks, they’re almost identical and have blue-gray upperparts, rust-orange breasts, and dark banded tails.

They also have a long, square-ended tail, rounded wings, and a small head.

Despite being winter visitors, the Sharp-Shinned Hawk isn’t the easiest bird of prey to find. Famously secretive, they set up home along forest edges and rarely stray from their territory.

Here, they hunt for smaller songbirds, which they’ll often catch in flight by navigating through tree branches with incredible speed and agility.

Should food become scarce, they will venture further out and have been known to snatch birds feeding from backyard feeders.

If this is something that you’ve had a problem with recently, there’s a fairly simple solution; just remove your bird feeders for a couple of weeks.

The Red-Shouldered Hawk is one of Georgia’s most common Hawk species, and can be found in the State all year round.

They are most commonly spotted soaring along the edges of streams and rivers near woodland, hunting for snakes, frogs, and small mammals.

Their easiest-identifier is their namesake red shoulders, and they also have a red barring on the breast along with black and white checkered wings.

In terms of size, the Red-Shouldered Hawk is fairly large, measuring around 24-inches long and with a wingspan of 43-inches.

The Red-Shouldered Hawk also has a distinctive “cack-cack-cack” call, so if you’re still not 100% sure you’ve spotted one from its markings, listen out for its call to confirm instead.

Another common sight in Georgia, the Red-Tailed Hawk is a non-migratory bird of prey.

This means that it can be seen in Georgia all year round. It’s also one of the easiest species of Hawks to spot, not because of any standout markings, but due to its habit of hunting above open fields along the road.

As you may have guessed from their name, the Red-Tailed Hawk has a red tail. This tail is also short and wide, while its wings are much larger and round-ended.

Both sexes have similar markings with brown upperparts and pale underparts, although the female is a little larger in size.

The Red-Tailed Hawk nests very high up in the canopy of trees and cliff ledges, although they have also been seen nesting at the top of tall buildings and towers.

Once their nest is constructed, the female will lay 2-3 brown-blotched eggs and the couple will raise their brood together. Once the chicks are fully-fledged, the couple will go back to solitary life.

One interesting fact about the Red-Tailed Hawk is that its distinct, high-pitched screech is often used in the movie industry as a sound effect for all raptors.

The final entry on our list of Georgia’s Hawk species is the Cooper’s Hawk. This is another winter visitor to the State and, although a fairly rare sight, is more common than the elusive Sharp-Shinned Hawk.

The Cooper’s Hawk is very similar to the Sharp-Shinned Hawk in appearance though, which can make telling them apart quite difficult.

They both have that blue-gray upper and rust-orange breasts. Both species also have a dark banded tail. The main difference between them, however, is size.

The Cooper’s Hawk is much larger than the Sharp-Shinned Hawk and has a larger head that extends well beyond the wings.

Most commonly spotted at the edges of forests, the Cooper’s Hawk builds its nest high up in the trees or in a large clump of mistletoe.

It feeds on small mammals and medium-sized birds and, when food becomes scarce, it will also visit backyards to attack birds feeding from bird tables.

While there aren’t as many species of Hawk in Georgia as there are in some other States, such as Michigan, there are still quite a few to spot.

There’s also a Hawk to spot no matter what the time of year, with some remaining in Georgia all year round and others visiting for the winter.