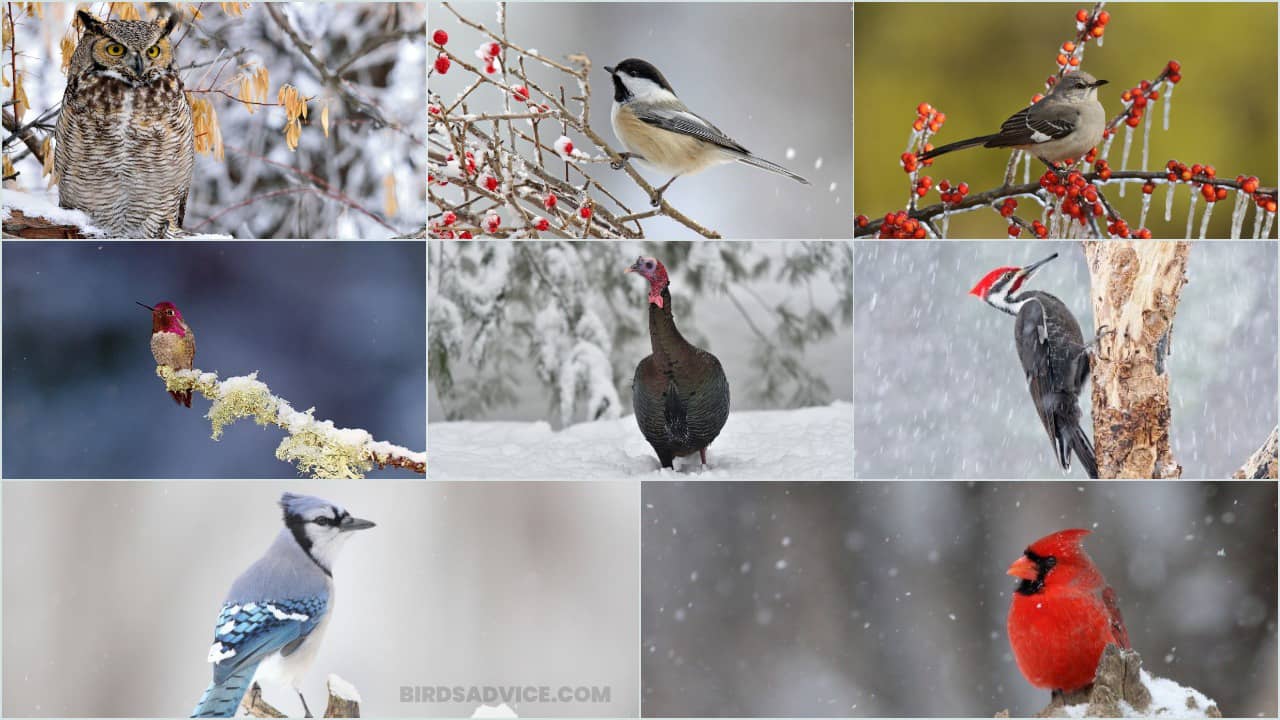 Once winter snow starts falling, many backyard wild birds have already headed to warmer regions. Only a few of them that have evolved for winter weather stay behind. We pay our heartiest love and respect to the birds that never leave us in the coldest snaps.

In this article, weâ€™re going to talk about how these overwintering birds survive harsh winter weather. Once finished reading this article, we suggest taking a look at another article about the birds that inhabit the Arctic year-round.

Birds That Stay Around For the Winter

Northern cardinals donâ€™t usually migrate during the winter, though they may travel if food sources are scarce. Unlike other birds, these birds donâ€™t even molt into a dull plumage. Since you can enjoy northern cardinals all year round, especially in winters, you should offer them natural food sources, like sunflower seeds, cracked corn, and fresh berries.

To provide them adequate shelter, make sure your backyard has secluded areas for nesting and shelter. Cardinals feel secure in thickets of dense shrubs and vines. In winter, they also love fruit plants, such as grapevines, clematis, blueberries, and hawthorns. Other comfortable winter shelters are evergreens like spruces and pines.

Most hummingbird species migrate, but Anna’s Hummingbirds are year-round residents. Since the 1960s, Annaâ€™s hummingbirds have been increasing their year-round limit further north from California to British Columbia. Theyâ€™re mostly found in the urban areas of the Pacific Northwest.

How do Annaâ€™s hummingbirds survive the northern cold? They get nectar from flowering plants and shrubs. Hummingbird feeders in backyards are another great source of nectar in winter. Besides, they enter a state of torpor to suspend their high rate of metabolism. During the state, they reduce their heart rates and body temperatures to a bare minimum.

Most blue jays donâ€™t migrate in the fall. According to estimates, only 20% of the population migrate south, especially along with the Atlantic and Great Lakes coastal areas. Some of them migrate south one year, miss the next year, and again migrate the following year. The migrating blue jays travel not more than a few hundred miles.

However, the migration rate has declined in recent years. This is because of more food availability in their breeding areas. Backyard feeders play an important role in declining their migration. If you want to feed wild blue jays in your backyard in winter, one of the best food for them could be Wagner’s Deluxe Wild Bird Food.

Pileated woodpeckers donâ€™t migrate. They stay together in pairs on their territory all year round, especially in chilly wintertime. Thatâ€™s why these birds are so noticeable around the Rocky Mountains on cold days. However, their populations have increased in southern New England and southern Canada in recent years.

During inclement weather, pileated woodpeckers forage on both standing and fallen dead trees. They love to eat suet in winter. The fat of the suet helps them survive harsh winter weather. If you would like to offer them some suet, we would recommend you take a look at the Woodpecker Suet Cake on Amazon.

Black-capped chickadees are one of the most common non-migratory birds in North America. In winter, these birds are usually available from New England to the West Coast, as far south as New Mexico, in the Appalachian Mountains south to Georgia, Canada, and Alaska. Theyâ€™re mainly cavity nesters in wooded areas in the wild.

Tufted Titmice donâ€™t usually migrate. These birds are year-round residents in deciduous or mixed evergreen-deciduous woods. In winter, they nest in natural tree holes and nest boxes. They cannot excavate holes in trees but use cavities left by woodpeckers. However, they have been observed to migrate to warmer regions in recent times.

Typically, tufted titmice feast on black oil and striped sunflower, safflower, sunflower chips, shelled and unshelled peanuts, and mealworms. In the winter, they also eat these food items if available. As a backyard bird lover, you would like to feed tufted titmice in your backyard. The Blue Seal Premium Wild Bird Seed on Amazon can be a readymade option.

Not all northern mockingbirds migrate to warmer regions. These birds are year-round residents in the United States, Canada, and Mexico. However, some of the northernmost populations migrate to the Caribbean Islands and the Bahamas to overwinter.

Typically, northern mockingbirds feed on various insects, like beetles, caterpillars, crickets, mealworms, grasshoppers, etc. When winter comes and insect populations are scarce, they rely on berries. You can offer these little songbirds some mealworms in your backyard. Hopefully, they will love the food.

Common ravens are not migratory birds. However, some of them may wander south in the fall in search of food. Typically, these birds are available in the western United States and much of Canada all year round. Besides, New York, Pennsylvania, Virginia, West Virginia, and Western Maryland are the ideal locations for them.

Ravens, just like crows, can eat anything, especially carrion and human garbage. During winter days, these Corvids gather in flocks to forage. If you love these birds and want to help them survive harsh winter weather, you can feed them anything from your kitchen. Consider offering them Wagner’s Backyard Wildlife Food in your backyard.

Most great horned owls donâ€™t migrate. Theyâ€™re year-round residents in the subarctic regions of North America. However, some of them may wander long distances southward in the winter, especially from Northern Canada to Southern Canada or the Northern United States.

Great horned owls adapt to harsh winter weather by changing their feeding habits. In winter, they eat small birds and mammals. They can even catch and kill larger animals than themselves. The mammals they usually prey on are rats, mice, rabbits, opossums, skunks, and ground squirrels.

Wild Turkeys donâ€™t migrate in winter. They adapt to the chilly climates by building up a supply of fat in their body by foraging on natural nuts, fruits, and berries. Basically, theyâ€™re year-round residents in the United States, particularly Wisconsin and New York. However, they may wander to the areas of larger trees to store abundant food for winter in the fall.

Typically, wild turkeys feed on nuts, berries, greens, and small vertebrates. In winter, they have to rely on only fruits and berries, like acorns, crabapples, plants, berries, hazelnuts, etc. If you would like to feed wild turkeys, you can offer them these food items.

You can enjoy watching wild birds in winter too as you know which birds arenâ€™t going to migrate. Provide non-migratory birds with a variety of rich-in-protein treats and fresh water in your backyard so that they can survive harsh winter weather more easily.

However, we hope you have learned a lot about what birds donâ€™t migrate in the winter. If you still have any queries regarding these above-mentioned, non-migratory birds, you can comment down below. Wish you spend a beautiful winter this year!