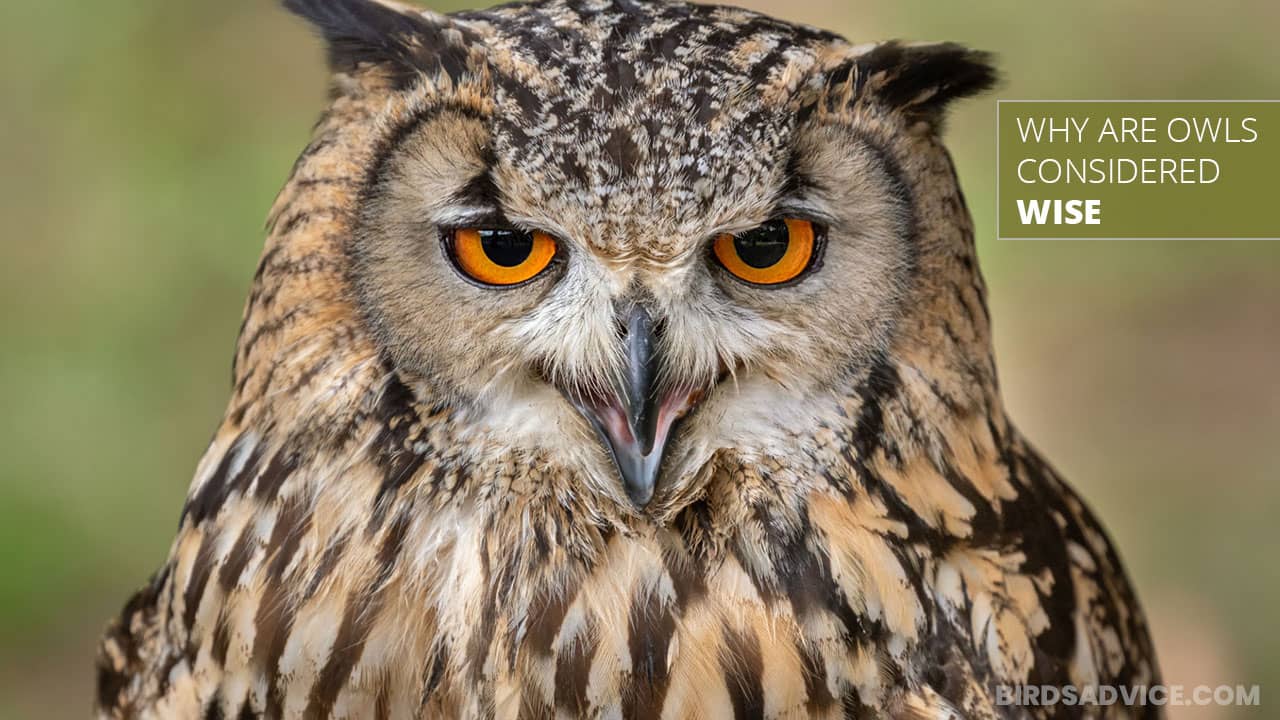 For over a thousand years, owls have been associated with sage and wisdom. These birds appear everywhere from ancient Greek to modern literature.

Humans have imbued owls with human qualities and portrayed them in everything from the Iliad (An Epic Poem By the Great Ancient Poet Homer) to Winnie the Pooh (Famous Anthropomorphic Fictional Teddy Bear, Created By Author A.A Milne).

But why are owls considered wise? People consider owls wise due to their intense senses and association with night. They boast night vision like no other birds, and they can remain calm all the time. They can perform jobs with utmost perfection and avoid accomplishing unnecessary tasks.

Many people consider owls wise because of their marvelous hunting ability and nocturnal schedules. Basically, it’s a mainstream belief across cultures, and it started from the ancient Greeks.

But not all people can contemplate owls as wise; some societies consider this fact a pervasive myth. Even in some cultures, owls are associated with foolishness and ill-gained wealth. In this article, we will discuss the myths surrounding owls and explore their other traits.

Related Blog: Why Do Birds Bathe In Dirt? Read now

Owls are as intelligent as other birdies, but they fail to pass the complex cognitive test. For instance, burrowing owls can lure dung beetles using the dung. On the other hand, Gray owls cannot pull a string to bring a treat to them.

Even after that, they are known as wise birds. These raptors boast acute senses, superior vision, and hearing, making them unparalleled hunters and helping them become intelligent, intriguing, and revered beings.

Now let’s answer a common question and talk briefly about the perception of owls around the globe.

Is Bad Luck Associated with Owls?

Owls are nocturnal, and they go well with the night, darkness, and the unknown. Besides, they are also intimidating, aka birds or prey.

Hence, all these elements make owls a symbol of darkness. And they are even considered the death symbol in many cultures.

Speaking of the cultures, ancient Greeks, Romans, Africans, Native Americans, Japanese, Indians, and others pose beliefs regarding owls being wise or symbols of spiritual authority. Let’s uncover some of these beliefs-slash-myths.

Many Native Americans consider owls symbols of wisdom that we already know. But do you know that some Americans see owls as symbols of strength and power? According to some, owls carry ancestral souls and protect warriors.

While there are some assertive conceptions about owls, there are negative ones. In Native American Mythology, owls are considered a symbol of death. Many tribes, including Lakota, Omaha, Ojibwa, believe that owls correlate to the afterlife.

Not only that, but they also think these birdies can be the spirit of the dead. Most Native American tribes consider owls’ hooting an unlucky omen too.

Owls represent Athena, the goddess of wisdom, in Greek culture. Greeks have always admired these birds; they have used owls’ images in classic paintings and statues.

They have even drawn Athena’s picture with an owl, considering it Athena’s favorite companion.

Owls have managed to win the hearts of Romans. They consider this bird of prey the goddess of wisdom and prophecy, known as Minerva. They believe owls can see the future and can bring knowledge to people.

Apart from those aforementioned beliefs, Romans also see owls as a warning sign of defeat, and they think dreaming about an owl can bring a shipwreck. These are some of the myths found in Roman mythology.

Japanese see owls as a symbol of wisdom and education; they also associate this bird with good luck. Japanese have always loved to portray this bird in various arts; they even use owl images in movies, anime, etc.

However, in some parts of Japan, owls are considered spooky birds.

Chinese people consider owls as an ill omen. Not only that, but they also believe owls’ large eyes are demonic.

However, they only regard the Feng Shui Owl as a symbol of good luck, and wisdom. In ancient Chinese philosophy, owls are seen to be used as a powerful totem to lure prosperity.

According to a legendary story of Mongolia, Genghis Khan, the emperor of the Mongol Empire, was saved by an owl during emergencies. That’s why Mongolians believe owls are life-savior bird species.

Indians believe owls have a connection with one of their gods, Lakshmi, who is known as the goddess of wealth. In their mythology, Lakshmi uses owls to obtain wealth.

So, Indians consider owls a symbol of money and wealth, and they associate these birds with greed and corruption.

As we have said in the introduction of this article, owls have managed to take place in literature for arousing traits. Some famous poets have written countless poetic lines based on owls.

Among these, the most notable ones are found in Iliad, Aesop’s Fables, Winnie the Pooh, etc. In Iliad, we have seen owls are used as a successful disguise for sleep, a symbol of wisdom and intelligence.

Again, in Shakespeare’s many works, we have witnessed owls as a foretold of death. Owls are reflected in Shakespear’s literature as a bad omen, and Shakespear associated these birds of prey with death.

Owls are popular around the world; they appear in mythology and literature for their intriguing behaviors, including nocturnal habits and superior senses of hearing and vision. Some people worship them and use them for intimidating purposes.

By the way, here is the end of this article; we hope you learned something new today. If you still feel anything important that we didn’t include in this article, let us know below. Follow us on Facebook, Twitter, and Pinterest.