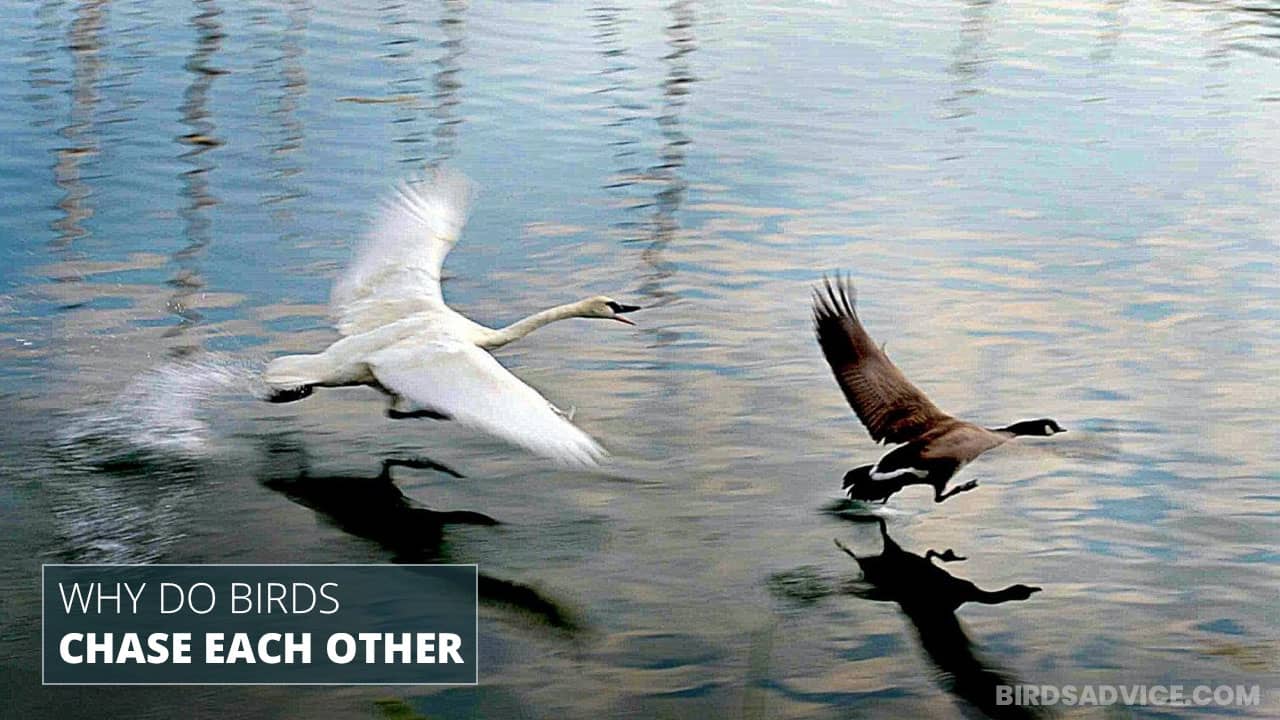 Birds are famous for their physical appearance and graceful aerial maneuvers. All their activities stimulate birders’ curiosity and make birders explore these birds. One such activity is their chasing endeavor.

Quite interesting, right? If you wanna know more about their chasing behavior, let’s dive deep into this article. Let’s get started.

All The Reasons Why Do Birds Chase Each Other

1. To Protect Their Territory:

Birds chase other birds to scare them off and protect their territory. While scaring potential predators away, a group of bird flocks indulges in this activity, and avian experts call this chore mobbing.

Regardless of bird types, no birds will love to have another bird coming to their territory unless they call for courtship. And birds, especially female ones, become extra protective when it comes to protecting their hatchlings. And thus, they chase other birds.

For every species, food is an essential item to survive. That said, birds will protect their food by all means. So, when they notice an intruder around their food source, they start chasing after it.

Many birds tend to stash natural food in their territory, and they don’t want anyone to be aware of their food resource. However, if any bird or predator comes close to their food source, birds chase them, and even if needed, they can also engage in fighting.

Sometimes, birds chase other birds out of aggression, and mostly there is no reason behind their attack. When birds get frustrated, they start hating everything, even other birdies’ presence.

Some birds indulge in fighting when undergoing this condition. Birds’ personal traits are really mysterious; you can’t entirely understand their behaviors.

Birds chase predatory birds like magpies, rooks, jays, crows, and more to prevent their nests and hatchlings. As you may know, these predators are known for snatching birds’ nests and eating their eggs. So, birds get furious whenever they notice any predators.

They mob predators to defend their young, and you can notice birds’ mobbing activities mostly during spring and early summer as these times are mainly their breeding seasons.

Another interesting fact regarding birds’ mobbing is that when one bird species engages in mobbing, other different birds will also join the force to fight against a common enemy. You can see that they believe that unity is strength.

Some birds chase other birds to mate, and primarily male birds track the female ones to engage in mating. And you can notice these chasing, aka mating behavior in ducks and roosters.

So, these are all facts about why birds chase each other; now, below, let’s answer some common questions regarding birds’ chasing endeavors.

Why Do Birds Chasing Each Other In Circles?

There are a few reasons why birds might chase each other in circles. One reason could be that they are competing for a mate. Another reason is that they are trying to establish dominance over another bird. Lastly, it could simply be that they are playing around and having fun.

Whatever the reason, chasing in circles is a common behavior among birds. It is a strategy that they have developed to help them survive and thrive in the world.

What Kind Of Birds Are Famous For Chasing Each Other?

Chasing is a common behavior among a few types of birds. One type is Harris’s hawk, known for its aggressive behavior.

And the most common aggressive bird species are:

What Should You Do If You Notice Two Birds Chasing Each Other?

If you see two birds chasing each other in your backyard, it’s best to stay away and let them chase each other. As territorial creatures, birds can become aggressive when their territory is threatened.

If you approach them, they may assume this as a threat and attack you. It’s best to leave these birds.

How Does Chasing Behavior Benefit Birds?

Finally, chasing can help birds to stay fit and healthy. By engaging in this type of vigorous activity, they can burn off excess energy and stay in good physical condition.

Do All Types Of Birds Engage In Chasing Behavior?

No, not all types of birds engage in chasing behavior, and some birds are more likely to chase than other bird species. And you may already know the reason behind their chase.

How Can You Protect Birds From Harm During Chases?

You can follow a few ways to protect birds from getting injured during chases. One way is to ensure that multiple predators are not chasing the bird at once. And you can do this just by keeping an eye on the chase and intervening if necessary.

Another way to protect birds is to provide them with escape routes. You can create safe places for them to hide.

Finally, it is essential to ensure that the bird is not being harmed in the chasing activity, and this means you should constantly monitor their chase.

Birds chase each other to show dominance or interest in a potential mate. They pursue to scare away predatory birds and protect their food, nests, and hatchlings.

Chasing is birds’ inherent nature; sometimes, they chase out of aggression. So, these are all known and accepted facts why birdies chase each other. We hope our effort has quenched your thirst for knowledge; if it did, we expect you to follow us on Twitter, Pinterest, and Facebook. Happy birding.