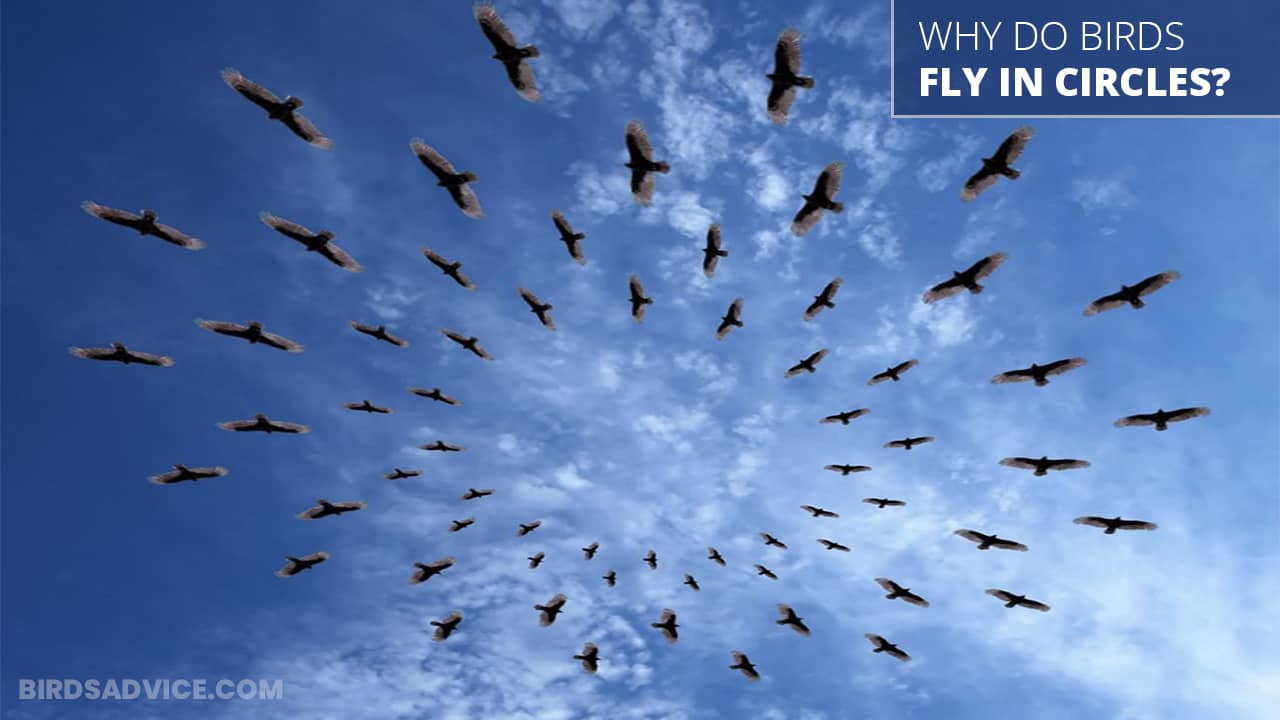 Being a bird watcher, you may have witnessed birds flying in groups at least once in your birding journey. Now, you might be wondering, why do birds fly in circles?

Well, birds fly in circles to confuse predators, find food, prevent energy loss, and more. Another reason is to get an essential lift from the air. In essence, birds take advantage of thermals that help them conduct long-distance flights without requiring them to burn more calories.

Now you might be asking yourself what thermal is. We will answer this question later in this article and thoroughly describe birds’ other flying patterns and the advantages they get by performing these intriguing flights.

Thermal is the air that comes into contact with the ground and starts absorbing heat. Thereby, the air becomes warmer and less dense than surrounding air and forms into column rise, which is called thermal air.

By utilizing this air, birds can stay aloft for an extended period without flapping harder or putting so much effort into flying. It’s a similar act of river fish that spend less energy to travel various directions with river flow.

Likewise, birds use warm and rising air instead of water to reach higher altitudes comfortably.

Why Do Birds Fly In Groups?

Below we have described why birds fly in groups. Let’s start reading thoroughly.

Birds use this flying pattern to confuse predatory birds to spot a particular target from the group of birds that is swirling around consistently.

Birds make it challenging for predators to determine which target to focus on. As a result, predators waste time, and birds make their way to leave the danger.

Another benefit of flying in a circle is that when one of the feathered creatures is startled by anything, it notifies others with alarm.

And so, other birds of the flock can take necessary steps to prevent danger.

Birds know that they can make mistakes while flying and figuring out a direction. Thus, to avert any unwanted danger, birds opt for this solution of flying in circles.

They assume that it can be a perfect way to accurately orient themselves in a specific direction.

Watching birds flying in circles like crazy and performing stunning acrobatics in the air may make you think they are having fun. In reality, they aren’t; in essence, they accomplish this kind of a chore to find food.

Some birds like stellar jays hunt flying insects, and others such as hawks fly in circles to spot several food sources in the flying area.

Flying upwards is an immaterial activity for birds, even though they opt for it to gain altitudes and fly effortlessly. They utilize this flying method while accomplishing long-distance flights, especially over mountains.

It is also a way of luring more birds to join their flocks to prevent more energy loss together. However, some large birds don’t tend to fly in circles, but when it comes to examining an area for updrafts, they choose to fly in groups all the time.

One such bird is the vulture; this bird flies in circles to stay high up while searching for food. Also, one vulture takes help from other vultures if one finds a food source. So, it’s a win-win situation for them.

Flying in groups has evolutionary benefits for birds. When catching prey, their grouping behavior provides them with adaptive advantages.

For instance, small birds often have higher metabolism rates, and flying uses up most of their stored body energy. Hence, they prefer flying in circles rather than alone to accomplish long-distance flights comfortably.

What Kinds Of Birds Fly In Circles?

Some birds like starlings and pigeons tend to fly in circles because, as you know already, they do this to confuse predators and save energy. Likewise, migratory birds also fly in groups during winter in search of food.

Some common backyard birds like sparrows and blackbirds fly in circles. They gather in one place to find food sources and water supplies and avoid predators.

Sparrows are seen to act differently among these two bird species when assembled in a flock. They don’t only fly in circles but also create murmuration.

The actual reason for creating murmuration is still unknown; some researchers believe they do it to repulse predators.

Why Do Some Birdies Fly in “V” Formation?

You will find a couple of answers and theories related to this birds’ flying pattern. But the most promising one is that birds fly in the “V” formation to save energy during a long flight and facilitate the flight.

Also, they perform this flying method when they need to follow their leaders.

Birds adapt to this flying formation as it makes them create less turbulence and less drag while flying. By engaging in this flying pattern, they can find the best aerodynamic position to fly for an extended period without spending much energy.

Do Birds Fly In Circles Before Storms?

Yes, they do; birds can detect changes in the air and climate. Therefore, they become quiet before storms and start flying in circles.

They perform this chore, especially before storms, as it enables them to prevent energy loss during their flight.

Now, you know why birds utilize various flying mechanisms. The significant reason for conducting such flights is to stay in the sky without spending much effort. Birds fly in V and circular formations, especially during long-distance flights.

They also perform these flying patterns to protect themselves from predators, hunt their prey, and scout an area for food sources. These are the most known reasons for birds to fly in groups. So, that’s all for this article.