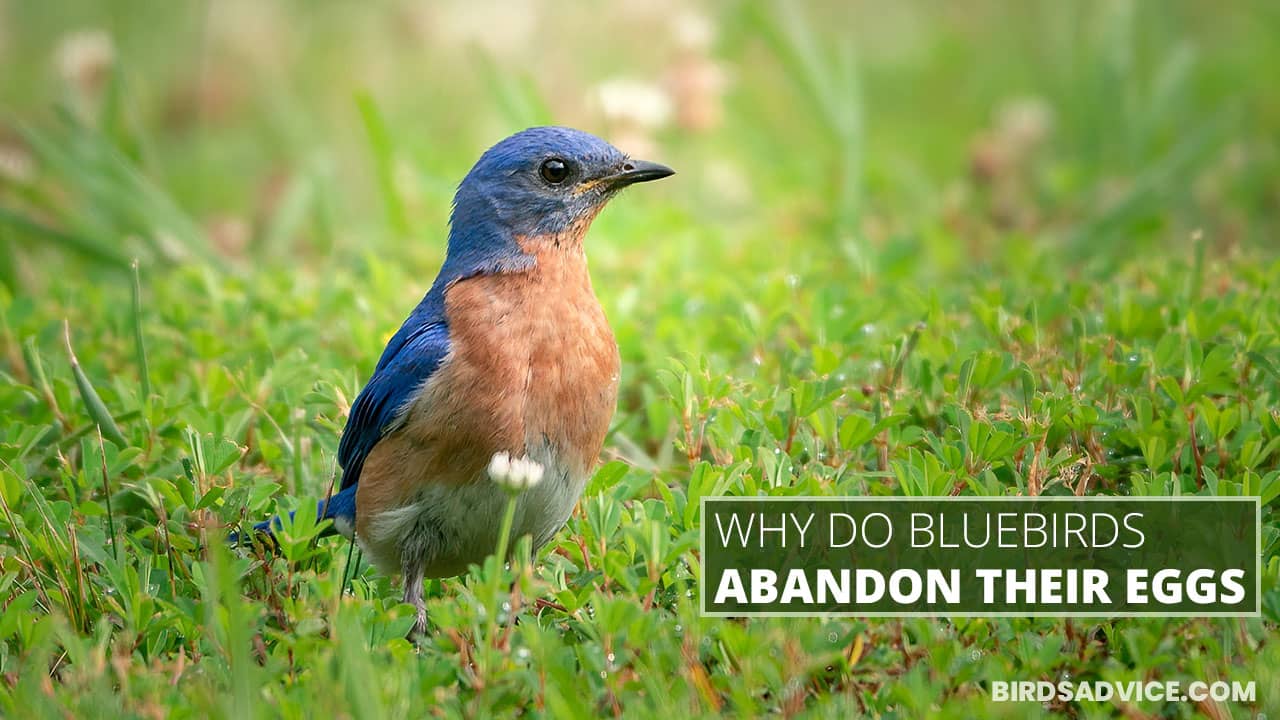 Do bluebirds abandon their eggs? The short answer is yes. This might be one of the most disheartening experiences many birders have. Youâ€™re probably looking for a reasonable explanation why this happens.

Contents show
1 What Are the Reasons Why Bluebirds Abandon Their Eggs?
1.1 01. The Eggs Are Unfertilized
1.2 02. Adult Bluebirds Pass Away or Get Killed by Predators
1.3 03. The Eggs Arenâ€™t Properly Incubated
1.4 04. The Eggs Are Destroyed by Predators or Other Birds
1.5 05. Just Gone to Get Food and Will Return
1.6 06. Scared Away by Predators or Humans
1.7 07. Insect Infestation in the Nest
2 How to Help Bluebirds to Incubate Their Eggs Properly
3 What to Do If You Found an Abandoned Bluebirdâ€™s Nest with Eggs
3.1 What You Should Do
3.2 What You Shouldnâ€™t Do
4 What Should You Do If You Found Bluebird Eggs on the Ground?
5 Can You Hatch Abandoned Bluebird Eggs?
6 Final Words

So, why do bluebirds abandon their eggs? The main reason is one or both bluebird parents could be scared or killed by a predator or humans. Bluebirds also abandon their eggs due to poor incubation, insect infestation, overheating, and poor weather.

Apart from that, there are some other reasons out there. Here weâ€™re going to talk about all that. Once you finished reading the article, we would recommend taking a quick look at another article on attracting bluebirds to the backyard.

What Are the Reasons Why Bluebirds Abandon Their Eggs?

Bluebirds may abandon their eggs for many reasons. Here weâ€™re going to talk about the 7 most probable reasons.

01. The Eggs Are Unfertilized

Just like humans, bluebirds can be infertile. For your information, infertility in birds is a birding pair is unable to produce eggs with viable embryos. Typically, an infertile bluebird pair can mate, lay, and incubate eggs.

Once the bluebird parents realize theyâ€™re not going to get chicks, theyâ€™ll either abandon the eggs or throw them out of the nest. Eventually, they start building a new nest, even right atop the unfertilized eggs.

02. Adult Bluebirds Pass Away or Get Killed by Predators

If one or both bluebird parents pass away, the eggs could be abandoned. Something unfortunate may even happen to them due to the attacks of natural predators, such as cats, snakes, raccoons, foxes, and larger birds like hawks.

If one parent passes away or is killed by a predator, the other one, especially the female usually takes the responsibility because the male cannot incubate eggs. However, the female may abandon the eggs and look for a new partner.

Bluebirds may abandon their eggs because of poor incubation. The female might be inexperienced. She might leave the eggs too many times while incubating. As a result, the embryos inside the eggs wonâ€™t develop enough.

There are several reasons why the female leaves the eggs while incubating. Maybe, there isnâ€™t enough food around, and she has to go afar. Humans may monitor the nest of the bluebirds too often, and the female feels disturbed.

04. The Eggs Are Destroyed by Predators or Other Birds

Bluebirds might abandon their eggs if any of their predators, such as cats, snakes, and raccoons and some other birds like house sparrows and house wrens destroy some or all of the eggs.

Compared to other predators, snakes and raccoons devour bluebird eggs more. House sparrows and house wrens donâ€™t usually devour but destroy the eggs. Once such an incident occurs, the bluebird parents may abandon the eggs.

05. Just Gone to Get Food and Will Return

While incubating eggs, bluebird parents have to leave the nest after a certain period to eat food. They could be off the nest for up to half an hour (30 minutes). However, the female hardly gets up off the eggs during incubation.

If you look inside the nest while the parents are absent, you might assume that the eggs are abandoned. Maybe, the parents havenâ€™t started hatching the eggs yet. Itâ€™s also possible that theyâ€™re monitoring the eggs from the distance.

06. Scared Away by Predators or Humans

Bluebirds arenâ€™t usually scared of their competing birds, predators, or humans. Once they get scared, they will return to the nest. But, if they feel excessively harassed or disturbed, they might give up the nest and abandon the eggs.

Competing birds such as house sparrows and house wrens try to destroy bluebirdsâ€™ eggs. On the other hand, animal predators, like snakes and raccoons usually raid the nest. Humans become too close to the nest.

07. Insect Infestation in the Nest

If a bluebird nest becomes infested with a lot of insects, such as mites, ants, and flies, this might be unbearable for the bluebird parents. This might also be unhealthy for them to sit on the eggs. So, they may abandon the eggs.

Sometimes, the parent birds think that itâ€™s not worth investing the energy on a specific egg. The insects would reduce the chances of the eggâ€™s survival after being hatched. Therefore, the parents abandon the egg.

How to Help Bluebirds to Incubate Their Eggs Properly

You should mount the bluebird nest box on a metal pole to them and their eggs from potential predators. This is because a wooden pole or tree is easy to reach, and the predators can easily climb on. You can have a look at this on Amazon.

In order to deter snakes and raccoons especially, you should install a stovepipe-style baffle on the pole. You can purchase one from a reputed retailer or online. We suggest you check AUDUBON Clear Squirrel Baffle on Amazon.

Make sure to mount bluebird nest boxes 50 to 100 feet away from densely wooden areas to avoid competition between bluebirds, wrens, and sparrows. This is because sparrows and wrens usually live in dense foliage.

Bluebird eggs may remain viable for up to a couple of weeks after being laid. So, once you get an abandoned bluebirdâ€™s nest with eggs, you have some dos and donâ€™ts. Here weâ€™re going to discuss some important ones.

What You Should Do

What You Shouldnâ€™t Do

What Should You Do If You Found Bluebird Eggs on the Ground?

Pick the egg up carefully as theyâ€™re very fragile and put it back in the nest if you know the nest and can easily reach the location. Your scent wonâ€™t disturb the parents. But, if this happens once again at the same place, leave it.

The best practice is to leave the egg alone. Maybe, fallen eggs have been broken, the developing chicks are badly injured, or the eggs arenâ€™t getting the proper temperature for too long. The chance of their survival is almost zero.

Can You Hatch Abandoned Bluebird Eggs?

No, you shouldnâ€™t hatch abandoned bluebird eggs. Those who have licenses/ permits are allowed to do that. Since bluebirds are native birds under the Migratory Bird Treaty Act of 1918, itâ€™s illegal to possess their eggs.

Secondly, incubating the eggs is quite difficult. Since the eggs are abandoned, chances are they have been cooled for so long by the time you found them. In addition, specific temperature and humidity are required for hatching.

Now that you know why bluebirds abandon their eggs, you should help them to incubate their eggs without any hassle. Although we cannot stop this from happening, we can try to monitor the nest box properly.

However, we hope you have learned a lot about the reasons bluebirds may abandon their eggs. Have you ever found an abandoned bluebird egg? Share your experience with us below in the comment section.