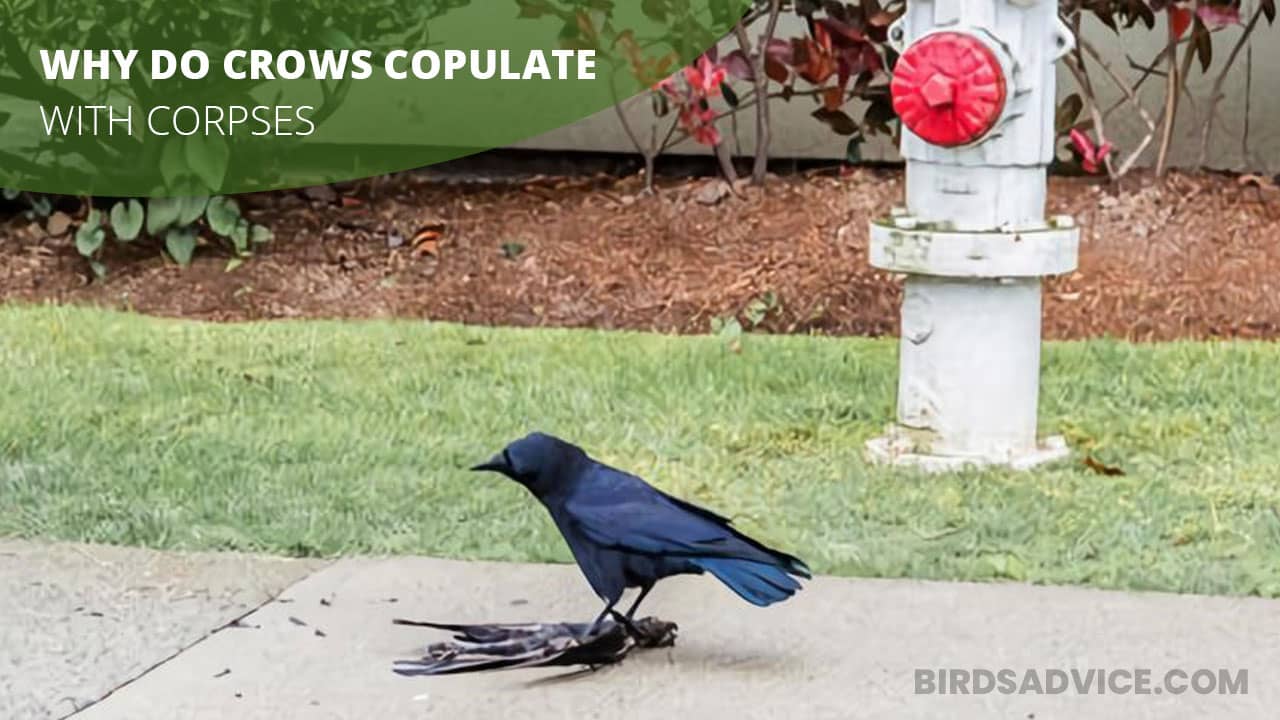 It’s not a secret that crows are one of the cleverest bird species. They have proven their intelligence by solving puzzles, remembering human faces, and even showing a grudge. But, do you know crows also pose a strange, shocking behavior? And that is copulating with dead bodies.

Contents show
1 How Do Crows Copulate with Corpse?
2 Why Do Crows Hold A Funeral?
3 Do Crows Eat Corpse of Their Own Species?
4 Why Do Crows Kill Other Crows?
5 How Long Does A Crow Live?
6 What To Do with Dead Crows
7 Wrapping Up

Now, you may be wondering, why do crows copulate with corpses? Researchers found that crows become libidinous during the breeding season, and a minority of them fail to deal with the unusual stimuli caused by a cocktail of hormones. Consequently, they indulge in sexual activity with corpses.

But it isn’t the only reason; crows recognize corpses as a source of food, a sign of an intruder, and a mate. Baffled with several conflicting responses, they opt for performing all of the actions at a time. That’s why they show aggression while mating the corpse.

How Do Crows Copulate with Corpse?

Once crows notice individual dead species, they alight and gaze at the carcass. Next, they start to caw from afar to alarm other crows.

Then, shockingly, a small percentage of the murder strut and mount on the dead bodies in a way that they’re mourning, but that is, in essence, an act of having sex. In the actual scenario, they begin rubbing their cloacas and continue to attempt to mate the dead crow until they face any disturbance by another living crow.

That’s how crows dabble in this dark art!

Interesting Fact: Crows aren’t the only creature falling into the necrophilia group. There are more species, such as squirrels, otters, mallards, and sea lions. These species always remain opportunistic. But most of them don’t display aggressive behavior like crows.

Why Do Crows Hold A Funeral?

Literally, you may hardly find anyone who hasn’t ever witnessed the crow funeral. Crows gather around corpses and gaze on purpose. As you know, they are clever; they perform this act to learn about potential dangers.

When they find any harmful incident, they alert other flock members. In short, they do this for their survival. So, when they notice any individual corpse, they hold a funeral to know whether there is any danger waiting for them or not.

Do Crows Eat Corpse of Their Own Species?

As far as we know about crows to date, they don’t eat the carcass of their peers as they are so protective towards other members of the group.

They have a sheer attachment to each other. They live together, fighting against potential threats for their survival. Although they are so kind to each other, they often get furious and even can kill each other after engaging in quarrels.

So, you can say that they are pretty mysterious.

Why Do Crows Kill Other Crows?

Crows attack others of their flocks to protect their mates, snatch food, and drive intruders away from their territory.

These are the common reasons for them to kill other crows. Sometimes they engage in playful fights for fun which later lead them to death. Speaking of death, now you may wonder do crows die naturally and how long they usually live.

Below we will answer these questions.

How Long Does A Crow Live?

If crows can make it to the last by battling various survival factors, including diseases, accidents, fights, and more, their lifespans will range from seven to twenty-two years.

For your information, common ravens live for about ten to fifteen years. American crows have around eight years of lifespan, while Australian ravens can lead a life for nearly twenty-two years. So, that’s the average lifespan of varied crows across the globe.

Now let’s talk about what you should do if you find a dead crow in your backyard or on pathways.

What To Do with Dead Crows

If you find a carcass in your backyard or anywhere else, the best and effortless job you can perform is to leave it as it is, or you can move it out of the way.

And if you consider yourself a sensible person, you can contact any wildlife agency or opt for disposing of the dead crow. Here’s how you can do it.

To dispose of, first, you need to wear a pair of bird disposal gloves to avoid unwanted diseases caused by mites, insects, and bacteria as soon as you come in contact with any infected carcass.

Then, use any tool, such as a shovel, to move the crow aside and put it inside a disposal bag; you can also use newspaper if you don’t have any suitable bag.

Afterward, put the wrapped bag in a container and make sure the container stays out of reach from pets and any other predators.

That’s all the information we have to date, and we tried to describe everything in detail to make you aware of the various behaviors of these social birds. Yeah, they are sociable despite performing necrophilia activities.

If you keep this fact aside, you will find them pretty impressive and caring. One study shows that some crows can make a bond with humans. Some people even claimed that they had witnessed crows gifting their owners.