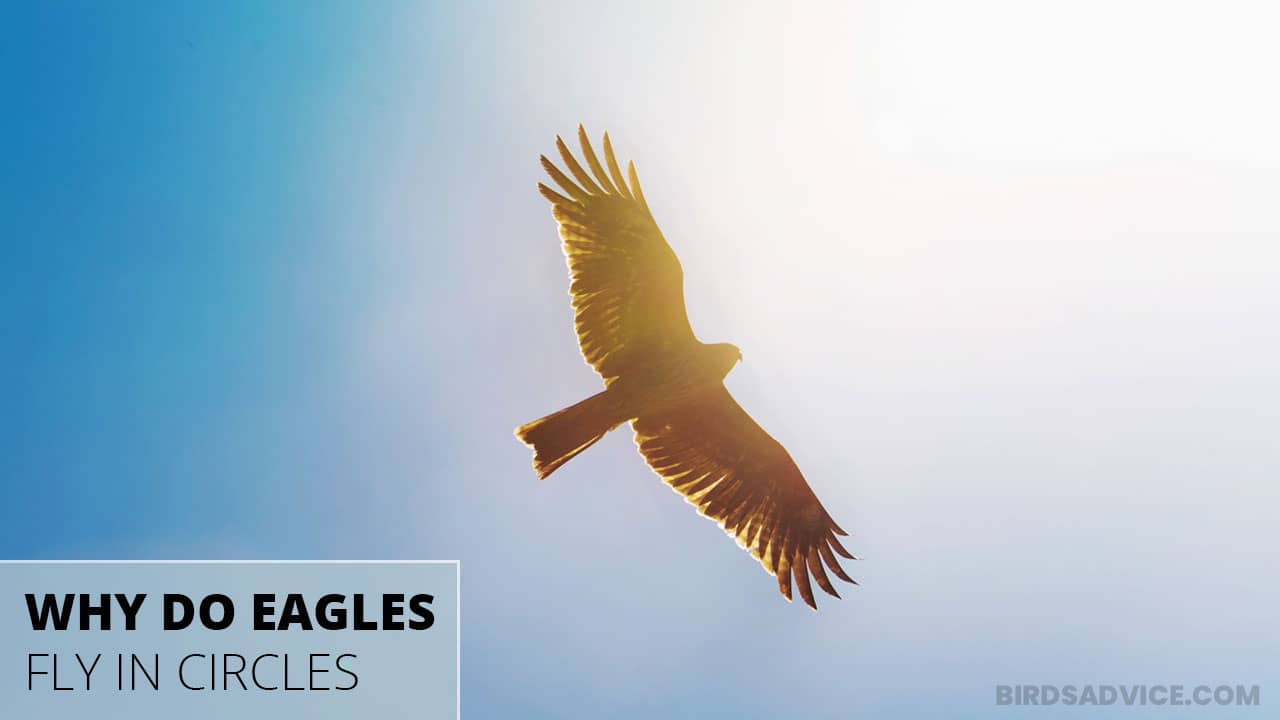 Have you ever noticed eagles flying in circles? You have probably seen them flying for a long time without flapping constantly. After experiencing such scenarios, you may have wondered how they can fly in such a way and why do eagles fly in circles?

Eagles only flap their wings when they find another thermal column in the sky while leaving the existing, dying one. They are pretty lazy, right? Let’s dig out eagle’s other exciting facts related to their flight.

How Do Eagles Fly Without Flapping Their Wings?

Therefore, they rise higher or stay aloft for an extended duration without flapping their wings. Once they reach their desired flying height, they just position their wings to glide effortlessly.

Why Do Eagles Fly So High?

Eagles are known for flying high, thus allowing them to spot prey on land or in water. They can reach up to 10,000 feet if required. They boast acute vision, allowing them to detect targets hiding underwater.

They can even detect a slight movement of ground targets while flying at an altitude of around 1,000 feet. Interestingly, eagles can spot prey within a three miles range.

How Far Can Eagles Fly In A Day?

The conducted flights of eagles depend on various factors, such as:

Eagles can fly up to 124 miles or even more miles in a day during migration.

How Far Can Eagles Fly In An Hour?

Eagles’ flying speed isn’t constant; it can change depending on what eagle is performing. If eagles are just flying around from one feeding area to another, their flying speed will be on average 20 to 30 miles per hour.

In contrast, if they fly to catch prey, the speed may rise above the aforementioned speed. For your information, golden eagles were recorded to fly at 200 miles per hour speed.

Do Eagles Fly In High Winds?

Eagles tend to drift with the wind and may even diverge from a straight line to get flying benefits with the help of the wind.

However, eagles can sometimes go off the flying route due to heavy wind blow, but if there is no wind, eagles can barely soar. Hence, they become more likely to stay on the ground or complete local flights.

Can Eagles Fly In Storms?

Eagles can fly in storms; in essence, they love storms. While almost all bird species prefer fleeing from the storm, eagles fly into it. So, why do they do it? Eagles do this chore to use the storm current to rise higher quickly and effortlessly.

The air pressure helps them glide swiftly without any energy and lets them lock in a fixed position regardless of the violent storm winds.

1. Can Eagles Fly Across The Ocean?

According to experts, bald eagles can fly up to 3000 miles across the ocean. They can accomplish this strenuous job with the help of strong winds.

2. Are Eagles Faster Than Falcons?

Although eagles can fly at a blistering speed, they aren’t as fast as falcons. Falcons are the fastest animal alive, and they can reach more than 200 miles per hour speed while flying from point A to B.

Most eagles prefer flying alone, while some eagles opt for group flying. One such eagle species is the bald eagle. They follow other eagles flying to feeding grounds during the morning or evening routine of returning to the roost.

4. Why Do Eagles Fly Alone?

Mostly, eagles love to fly alone because they’re solitary birds of prey. These birds are unsociable, so they remain alone until they mate or teach their nestlings to fly or hunt. Speaking of hunting, eagles fly high alone in the sky and search for food.

5. Why Do Eagles Fly Above The Clouds?

While it rains, many birds opt to head for shelter. But the mighty eagles choose to soar above the rain clouds instead of finding shelter on the ground. It’s more like an experienced sailor sailing in the middle of a storm.

That’s all for today. We hope you have learned a lot about why eagles fly in circles and some other related queries. We have a piece of advice for you. In the US, petting eagles is illegal. So, we recommend you refrain from doing that.

Instead, pack your bag, grab your binoculars, and venture into the wild to spot and observe these predatory animals. Keep in touch with us on Facebook, Twitter, and Pinterest to get notified for the next article.