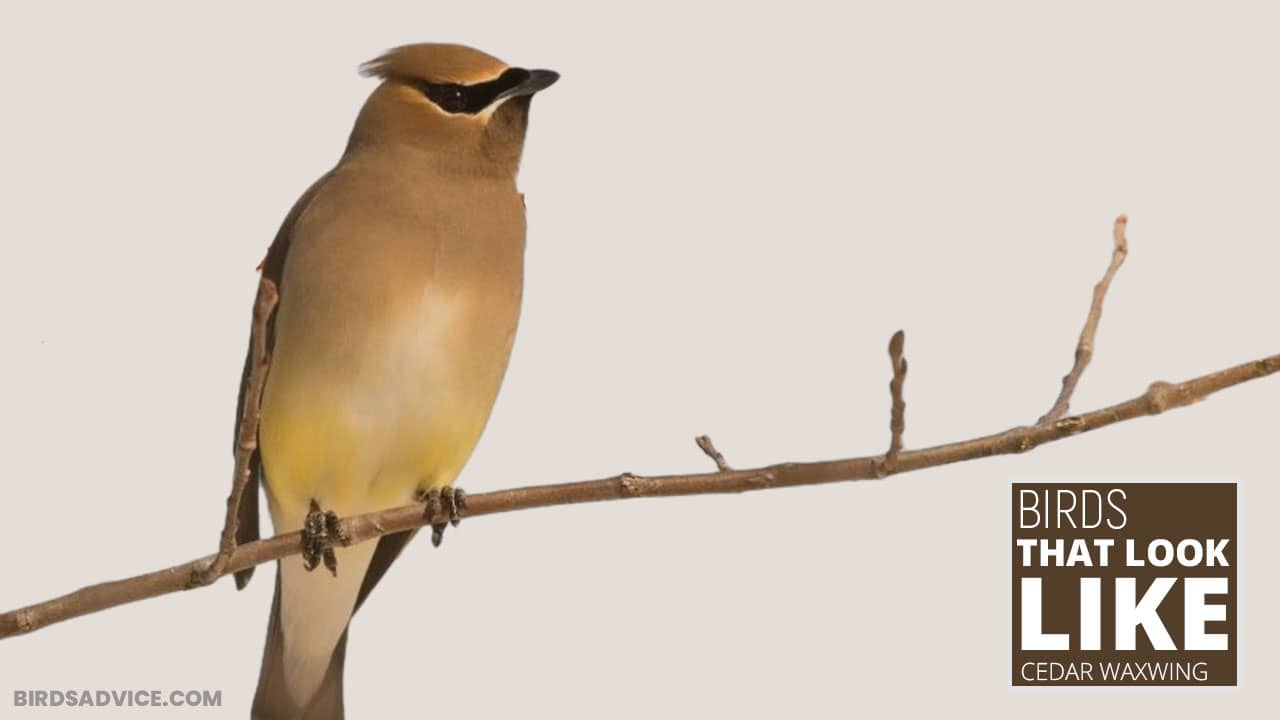 Many small birds resemble the Cedar Waxwing, but their bright orange plumage makes it easy to distinguish them. However, these birds are often mistaken for other birds with similar traits.

In today’s blog, we’re going to talk about these cedar waxwing look-alike birds, how to identify them, their similarities, and the main differences they have. So, after completing the blog, you’ll never mistake them as cedar waxwing.

Previously we’ve covered a few blogs on such topics. You can check them here:

Bohemian waxwing is one of the most common and most confusing birds that resemble our cedar waxwing. This bird can be found in open green forests, city parks, forest patches, and other open areas with plenty of fruits in the northern forests of North America and the Palearctic.

Since both are from the exact family origin, they have multiple similarities. The crest and the black mask on the peachy face are similar to each other. The bohemian and cedar waxwing both have a yellow-tipped short tails.

Except for a few minor color differences and body shape, they’re pretty much alike. Both of their wings are broad and pointed.

Finding the differences between the bohemian and the cedar Waxwing is difficult. If you’re not looking carefully, you can easily make a mistake. The Bohemian waxwing has an overall greyish-brown color while the cedars are pale brown to soft gray most of its body.

The body of the bohemian is full-bellied and has a comparatively small head than the cedar. Cedar waxwing is a sleek bird with a larger head. The belly of a cedar waxwing has a bright yellow tip, while the bohemian has pale brown.

Northern cardinal is one of the most common birds in the USA, which has a few similarities with our Cedar Waxing. The usual habitat of this species is distributed throughout North and Central America. They prefer gardens, shrublands, wetlands, and woodlands for living.

Mostly the female northern cardinals have similarities with the cedar waxwing. Both of the species have crests on their head. The color of female cardinals and cedar waxwings seem similar from afar, and the size is around the same too.

Pyrrhuloxia is a medium-sized song bird you can sometimes mistake for cedar waxwing. This bird is native to the American southwest and northern Mexico. They prefer scrub, dry grasslands, cactus, and gardens for living.

The crest on the pyrrhuloxia is quite similar to cedar waxwing. The average length is identical between these two species too. The female pyrrhuloxia has some color similarities with the cedar waxwing. Even though the color isn’t the same, the light greyish color can confuse you easily.

Looking carefully, you can easily differentiate the pyrrhuloxia from the cedar waxwing. Their bill color is different. The red highlights on the Pyrrhuloxia are absent on cedar waxwings.

The phainopepla doesn’t have any face mask like the cedar waxwing. The tail is also longer than today’s bird. Overall, the phainopepla is black and grey with a few light white highlights here and there. They don’t have the yellow, rusty, and other light colors like cedar waxwing.

The vermilion cardinal is another bird from our list, which is similar to the cedar waxwing. This species can be found in Venezuela and Colombia. They usually prefer semi-arid scrubland with spiny legumes and cactus area for living.

Between the cedar waxwing and the vermilion cardinal, the crest or crown on their head is the most common. The female body color is kind of similar to our cedar. Apart from these, there is nothing very common between these two.

In short, we’ve found that you can easily differentiate a cedar waxwing from other birds except for the bohemian through. As both bohemian and cedar are from the same family, it’s apprehensible.

Still, you can identify them if you look at them carefully. Other than this, the rest are confused because of their crest and their bodies’ greyish or blackish color. Get in touch with us through social media pages: Pinterest, Twitter, and Facebook.