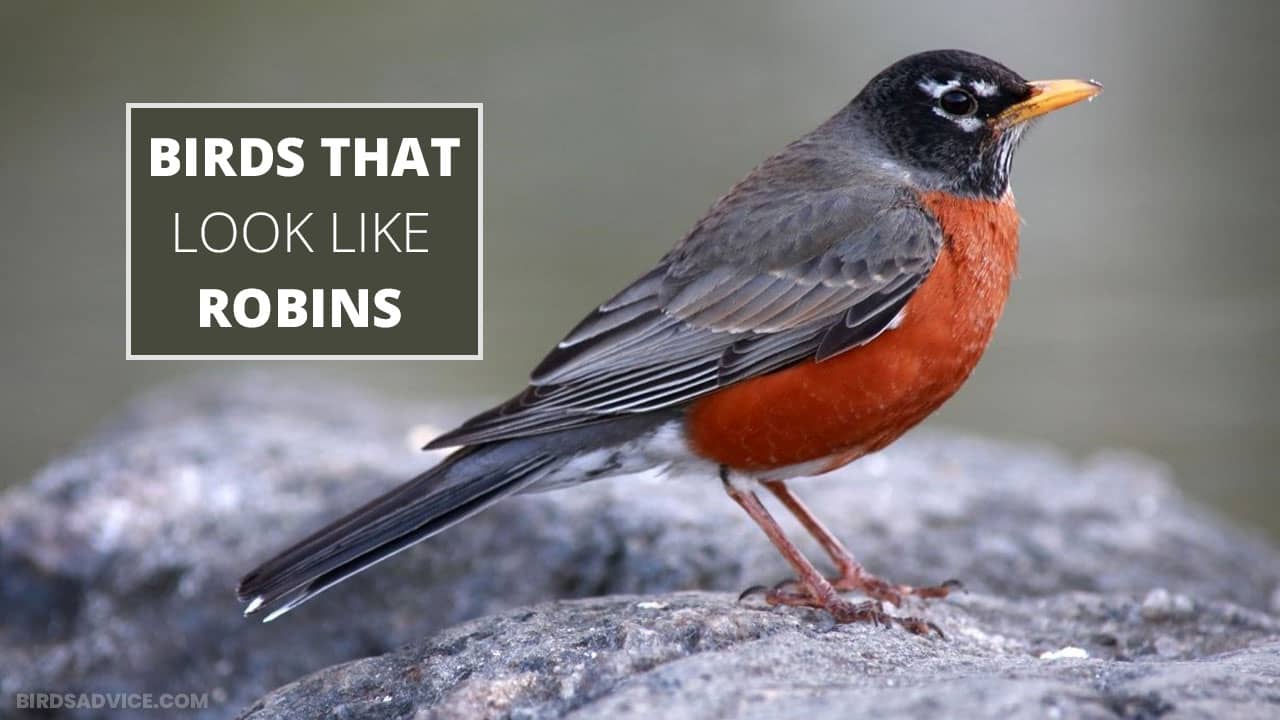 Some birds have been known to look like robins, especially American robins. Most of these birds have a red or rusty color on their body with a white chest and a big yellowish bill. Some of them have black stripes too. These birds can easily confuse you with Robins by these appearances or similarities.

We have a few more similar types of articles that may interest you. Check them out here:

The Spotted Towhee is one of the most common birds that look like robins but aren’t. Their widespread habitat covers California, Arizona, Washington, Nevada, Southern British Colombia, Utah, Idaho, Oregon, and more.

The main similarities between Spotted Towhees and American Robins are blackhead and the orange or reddish-brown color. Both of their tails are long, and the overall length and the body shapes are kind of similar too.

There’re a lot of differences you can easily identify if you look closely. Towhees have rufous sides, while the robins are rusty colored. Towhee’s belly is white, while Robin’s rusty color covers the belly and the remaining parts.

The bill of Robin is yellow, while the Spotted Towhee has black. Also, as the name suggests, Towhees have white spots on their wings and back. And the American Robins are comparatively larger than the Towhees.

The Varied Thrush is a migratory bird that breeds around Alaska, Western Northern America, and Northern California. They prefer mixed forests, parks, backyard gardens for a living. This species is a regular visitor to the Northeast and Upper Midwest during the winter.

The Eastern Towhee is the usual around the Eastern USA and south parts of Canada. During the summer, this population is common throughout northern Indiana, southern Iowa, and Illinois. They prefer brushy areas or low bushes in northern America for living.

The most common identical feature between Eastern Towhee and the Robins is their body’s rufous color. Both of their heads and necks are black. The length of their tails is also similar to each other.

Eastern Towhee and American Robin have several identical features between them. The rufous color on the Eastern Towhee’s only covers the sides like the spotted towhee. Towhees have white lower parts, unlike the burnt orange covering for Robins.

The Common Redstart is a passerine bird that looks like Robin but smaller. It’s a migratory bird from the African winter areas. It’s usual in Britain and low land areas of East Europe. Their usual habitats are birch, oak woodland, and low shrub areas.

The common redstart and robins both have orangish lower parts with white tints. The bill structures of them are kind of look-alike too. Also, the throat of the both species is black.

Even though you may mistake the Common Redstart as Robins, you can easily tell their differences with a closer look and observation. Robins are longer than the common redstart.

The Black-headed grosbeak is a medium-sized bird from British Colombia to the Western half of the USA. They’re also common in central Mexico and the South of Central America. It’s a migratory bird that lives in mixed wooded and deciduous areas.

The most prominent orange and yellow lower parts are the most confusing point to differentiate this species from the Robins. Even though they’re shorter than the robins, their body shape is quite similar to each other. Also, both of them have blackheads.

The rusty-colored breast and belly of the Robins are more vibrant in color than the Black-Headed grosbeak. The white spots on the grosbeak are absent on the Robins. The grosbeak is shorter than the Robins in length.

There’re only a few birds that can confuse you with a Robin. But the most common birds that look like robins are Spotted Towhee, Varied Thrush, Eastern Towhee, Common Redstart, and Black-Headed Grosbeak.

However, if you observe them with a little attention, you can easily tell the difference among these birds. You can also follow this blog and read the similarities and differences to tell them apart.